ST. GEORGE — The public is invited to attend a free lecture on the heritage of the St. George Tabernacle in historic downtown St. George or virtually. 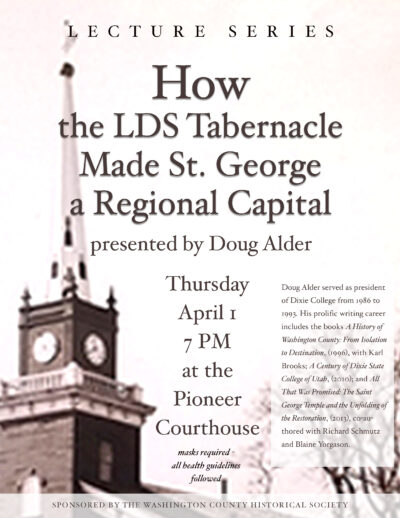 “How the LDS Tabernacle Made St. George a Regional Capital” will be held on April 1 at the Pioneer Courthouse, 97 E. St. George Blvd. The lecture begins at 7 p.m. and will be presented by Douglas D. Alder. To attend in person, sign up here or join the Zoom lecture here.

Alder is a former president of and current adjunct history professor at Dixie State University. He grew up in Salt Lake City, then earned his bachelor’s and master’s degrees in history, political science and German from the University of Utah. He and his wife, Elaine, and their infant son, Scott, moved to Eugene, Oregon, where he was awarded a doctorate in modern European history from the University of Oregon in 1966. He then received a Fulbright grant that allowed him to pursue research at the University of Vienna for his dissertation on the First Austrian Republic.

Alder was appointed assistant professor of history at Utah State University in 1963, where he taught German history and modern European history and, in 1974, was appointed director of the honors program. He published articles on Austrian history and social science education, and edited “Cache Valley: Essays on Her Past and People,” published in 1976.

In 1986, he was appointed president of what was then Dixie State College of Utah. He returned to teaching history in 1993 and continued until 1998, when he was called to be a counselor in the presidency of the St. George Temple for three years. Afterwards, he resumed his teaching, now as an adjunct history professor. In 1996, he and Karl Brooks wrote “A History of Washington County: From Isolation to Destination,” which was reissued in a second edition in 2007.

In 2010, he published “A Century of Dixie State College of Utah” for the college’s centennial. Alder has also published numerous LDS-related articles, reviews and essays, as well as fiction including the novel “Sons of Bear Lake” in 2oo2. He and Richard Schmutz have completed a manuscript about the history of the St. George Temple. He also compiled a book in honor of Juanita Brooks and published “Dixie Saints, Laborers in the Field” in 2017, based on interviews of 425 pioneers born in the 1890s and 1900s.