ST. GEORGE — The Color Country Chapter of the Daughters of the American Revolution is announcing an American history essay contest for all students in grades five through eight. 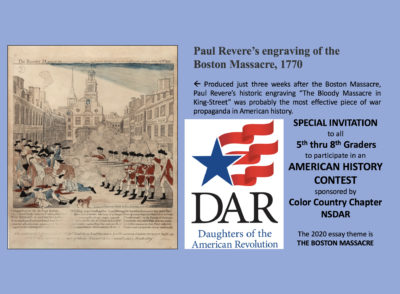 Students at these grade levels who are either attending a public, private or parochial school, in addition to home schoolers, are eligible to participate in this special contest annually sponsored by Daughters of the American Revolution chapters throughout the nation.

The contest is conducted without regard to race, religion, sex or national origin.  One essay at each grade level is selected as the chapter winner and forwarded to the state American history chair for state competition. State winners advance to compete at the division level, and division winners advance to national competition where one winner for each grade is named by the National Society Daughters of the American Revolution.

March 5, 2020 marked the 250th anniversary of the Boston Massacre, considered to be a pivotal event that paved the way to the American Revolution. Students are asked to imagine they are living in Boston and, after witnessing the events of March 5, describe their family’s discussion about the Boston Massacre and what role it played in organizing the colonists against the British king and Parliament.

A suggested reading list can be provided to assist students in their essay effort. The Color Country Chapter also suggests a book written by a local author, Jeffery McKenna, titled “Saving Dr. Warren … A True Patriot” that highlights the Boston Massacre plus other riveting events that took place during the American Revolution.

Mason Longhurst, an eighth-grade student from Challenger School located in Jordan, was first named a chapter winner by the Wasatch Range Chapter serving the Provo area. Shortly thereafter, he was named the state winner by the Utah State Society Daughters of the American Revolution and moved forward to compete at the division and national level. His essay, centered around the 400th anniversary of the Mayflower landing, was named the eighth-grade winner by the National Society Daughters of the American Revolution and showcased at the society’s 129th Continental Congress held in June 2020.

Those interested in participating in this essay opportunity can contact chapter regent Valerie King at [email protected] for complete contest rules and submission information. Entries must be received by the end of the day on Dec. 4.

'We just look at it and smile': Flags placed for veterans at Shivwits Cemetery