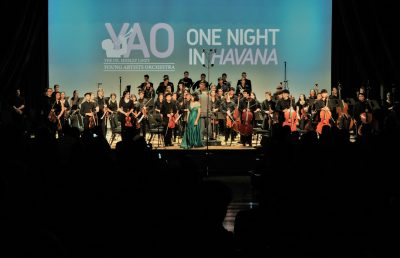 Cuban-American conductor and YAO Music Director, Yunior Lopez, leads members of the Young Artists Orchestra Symphony and Academy in a concert featuring music from his homeland with this one-night-only event.

Reminiscent of Buena Vista Social Club’s revival of pre-revolutionary Cuban music, “One Night in Havana” features Buena Vista classics like Chan Chan, Quizas, Quizas, Quizas, and El Cuarto de Tula, alongside other Cuban favorites popularized by artists like Celia Cruz, Beny More and Los Zafiros. This popular show features the stunning Cuban singer, Noybel Gorgoy, who will take you through a tour of beautiful Havana, which will have you singing and dancing all night long.

“One Night in Havana” made its debut in Las Vegas on Sept. 21. The program was an instant hit with superb singing from Gorgoy and unique orchestrations from renowned Cuban pianist Hilario Duran, Yunior Lopez, Arturo Hernandez and Roberto Occhipinti. The orchestra will make its Utah debut with this special concert.

The Dr. Shirley Linzy Young Artists Orchestra of Las Vegas (also known as The Las Vegas Young Artists Orchestra) will feature students from its Academy and Symphony Orchestra. Recognized as the only tuition-free & professional training youth orchestra in the State of Nevada, the Young Artists Orchestra program is home to the most talented young musicians in Las Vegas and regularly feature nationally and internationally renowned guest artists. Since the inception of YAO in 2015, 100% of our high school graduates have studied at some of the finest music schools and universities in the United States, as well as abroad. Current students and alumni are attending or earned their degree from Yale University, Vanderbilt University, Indiana University, the San Francisco Conservatory of Music, and the Lamont School of Music, to name a few.

This concert will benefit the tuition-free music program. Silent auction items and merchandise will be available for purchase at the Cox Performing Arts Center lobby.

Tickets $10-$20 are available from the DSU box office or online.

The Dr. Shirley Linzy Young Artists Orchestra of Las Vegas, also known as the Young Artists Orchestra (YAO), is a professional training youth orchestra based out of Las Vegas, NV. Led by Founder and music director, Yunior Lopez, the orchestra unites the most talented young musicians up to age 22, who bring their creativity and exceptional musicality to over 15 concerts and events per season. The program is currently comprised of the YAO Symphony featuring 70 plus young musicians up to the age of 22, and the YAO Academy with 50 plus students up to the age of 16.

Founded on the basis of educating and promoting young musicians, the Young Artists Orchestra is fully dedicated to the artistic, personal, and professional development of outstanding instrumentalists. Through a wide range of performance and instructional activities, the Young Artists Orchestra seeks to develop the skills and qualifications required of twenty-first century musicians. Under the Artistic and Musical direction of Yunior Lopez, the program offers detailed exposure to traditional and modern orchestral repertoire, collaborations with nationally and internationally recognized guest artists, in addition to unique chamber music opportunities. Moreover, it’s one of the few tuition-free youth orchestra programs in the United States. The 2018/19 concert season presents some of the best classical music Las Vegas has to offer. Performing at a professional level, the Young Artists Orchestra will venture into the renowned classical and non-classical works including Rachmaninoff’s Piano Concerto No. 2 featuring Canadian pianist Benjamin Smith, Video Game Music, and the music of West Side Story at the Smith Center – Reynolds Hall, to name a few. For a complete list of concerts and events, please visit our box office. As a non-profit 501(c)(3) organization, the programs are made possible by the generous donations and support of individuals, foundations, and corporations. To join us in our mission or learn more, visit us online. We’re on social media as well. Follow us on Facebook or Instagram.

Born and raised in Pinar Del Río, Cuba and now living in the United States of America, Noybel Gorgoy is a gifted international recording artist, musician, singer-songwriter, composer, and entertainer. Noybel’s personal style is a unique blend of her Cuban and classical roots, with Latin Soul, R&B, Jazz, Pop and more. Her music contains a powerful, loving and inspiring message. She has a track record of countless performances, touring around the world on grandeur platforms. Her passion for music led her into the School of Arts in Cuba as a classical pianist at the age of seven and later graduated from the National School of Music in Habana. While living in Cuba, she appeared in several national television shows and around the age of six she was featured on a radio show in her city with her father,Noel Gorgoy. She toured nationally and internationally as a lead vocalist with several famous production shows like Lady Salsa and Cuban bands like Azúcar Band and Azúcar Negra, performing in prestigious music festivals such as Festival Fiesta in Rome and Festival Polé Polé Beach in Belgium to name a few.

In 2004, Gorgoy arrived in the United States of America and became a cast member of the production Havana Night Show — A Cuban phenomenon brought to Las Vegas by international magicians and entertainers Siegfried and Roy with a residency at the Stardust Hotel & Casino. She has been featured alongside Paul Shaffer and at the production show Between the Lines with Grammy Nominee Clint Holmes. Gorgoy has also been featured as the lead vocalist of the gypsy jazz band The Hot Club of Las Vegas directed by the rippin’ guitarist Mundo Juillerat. In 2018 Gorgoy released her very first single as an independent artist from her upcoming album called “Puros Sueños”. In 2019 she released her song ”Mi niño” from the motion picture called “BURRO” an independent short film directed by Michael Forsch and Zak Fin.

Letter to the Editor: The ‘Dixie’ dilemma