ST. GEORGE — The iconic Larsen’s Frostop Drive-in has closed its doors. But the new owners of the property haven’t given up on the Frostop name remaining on St. George Boulevard.

The new owners, who are also managers at St. George real estate firm NAI Excel, include Jon Walter, who was born and raised in Southern Utah and has his own memories of the Frostop, which served its first root beer floats and shakes in 1965.

Walter told St. George News they are looking for someone who either wants to operate a restaurant on the property or lease it. As a local, he is hopeful that someone will continue to operate it under the Frostop name. But the new owners also want to make sure whoever comes in to operate any restaurant on the site has the financial backing to sustain it for the long-term.

“We don’t have a specific plan in place for the property. The first thing is that if there was somebody out there that would continue to operate as a Frostop … that was a great restaurant operator that wants to step in and keep running it and had the financial resources to do it, then that would be a great fit,” Walter said.

On the main, locked door to the restaurant is a posted sheet stating that “We are closed for the season.” It also has contact information for anyone who would want to “operate or lease Larsen’s Frostop.”

Walter said he has received several inquiries and conducted interviews for possible operators, but thus far said he has not had one who they felt was adequate to take the Frostop reins.

But at the closed site Tuesday was evidence that a reopened Frostop wouldn’t wait long for customers. Several cars pulled up and others walked up hoping to get the usual Picadilly chips or burgers named after king, queen and prince royalty, only to be turned away by the closed signs.

“I think somebody could go in and open this thing back up and continue without missing a beat. I genuinely hope there’s somebody out there that understands the restaurant business that says, ‘Hey, this is the perfect operation for me,’” Walter said. “I mean, all the restaurant equipment’s there, there’s the right to use the Frostop name. There’s no reason why it couldn’t continue to be a Frostop.”

That said, Walter also said there’s no requirement that a new operator or lessee retain it under the Larsen’s Frostop name. And while cognisant of community nostalgia and fondness for the site, he is mainly looking for someone with the financial means to succeed in a restaurant business that is seeing a slump not based on a lack of customers, but a lack of labor.

But Walter also thinks the right operator with the right backing can overcome that challenge.

Those shortages are apparent around town from the “now hiring” on many eatery marquees, the rising rate of pay offered for what have been minimum-wage jobs to restaurants that have closed altogether like Twentyfive Main.

Kim and Andra Garrett did not respond to a request for comment from St. George News. A post on the Frostop’s Facebook page simply says “Thank you for all the love and support,” as well as a post from the owners’ daughter stating, “My parents put all their heart and soul into this place and made it such a great place to work, eat and hang out.”

Taped onto a post under the awning where cars parked for the drive-in service is a sign saying “Larsen’s Frostop Memories” and a permanent marker for anyone to write up their recollections.

One says, “I have had the best burgers, fries and glaciers here for 50 years.” Another writes, “I remember coming up from Las Vegas for ward temple trips and eating at Frostop so we could get Picadilly chips.”

According to the Washington County Historical Society, Larsen’s Frostop first opened in November 1965 as a farmer’s dream.

Gale and Darlene Larsen were Uintah Basin farmers. For extra income, Gale Larsen ran a Wonder Bread delivery route that included a Frostop in Duchesne. Seeing it bouncing with business, the Larsens moved to St. George and opened the drive-in on St. George Boulevard.

When it was first opened, Frostops were a nationwide chain of franchised root beer stands not dissimilar from A&W restaurants like the one that still sits across the street from the Frostop. According to the corporate website for Frostop, which is still sold in stores as root beer drinks, there were 350 locations nationwide in the 1960s.

There are now, not including St. George, 12 other individually-owned locations with the Frostop Drive-In name. Most are in Louisiana, and a location in Ashton, Idaho, is the only Frostop besides St. George remaining west of the Mississippi.

Along with St. George, there were Frostops in Hurricane and Cedar City. Many, including the St. George location, were topped off by a distinctive, rotating giant root beer mug.

When Frostop as a franchise chain went out of business in the early 1980s and the restaurant continued under individual ownership, the mug was replaced by the current neon sign of a child carrying a giant burger, with sunglasses added sometime later. The mug still sat in the Larsens’ backyard, then was a landmark on their Washington Fields farm until it was sold to a museum/conference center and transported to Billings, Montana, in January 2020.

The Larsens decided to retire in 2002 and sold their Frostop to someone else with restaurant dreams, Nathan McCleery, a schoolteacher.

The dream moved on to the Garretts, who became the third owners in June 2008. At the time, Kim Garrett, a former basketball player for Dixie College, had spent the last 20 years managing Arby’s, followed by Tony Roma’s in St. George.

Now, Walter is looking for someone with new dreams for 858 E. St. George Blvd., but he said it will have to be someone who can make that dream last.

“Right now, we’re exploring options and trying to figure out what the best outcome for the property is long-term,” Walter said. “And if there’s somebody that is dying to lease it or dying to operate it, but it’s financially sound and could help preserve the Frostop, we would love to have conversations or discussions with those types of people.” 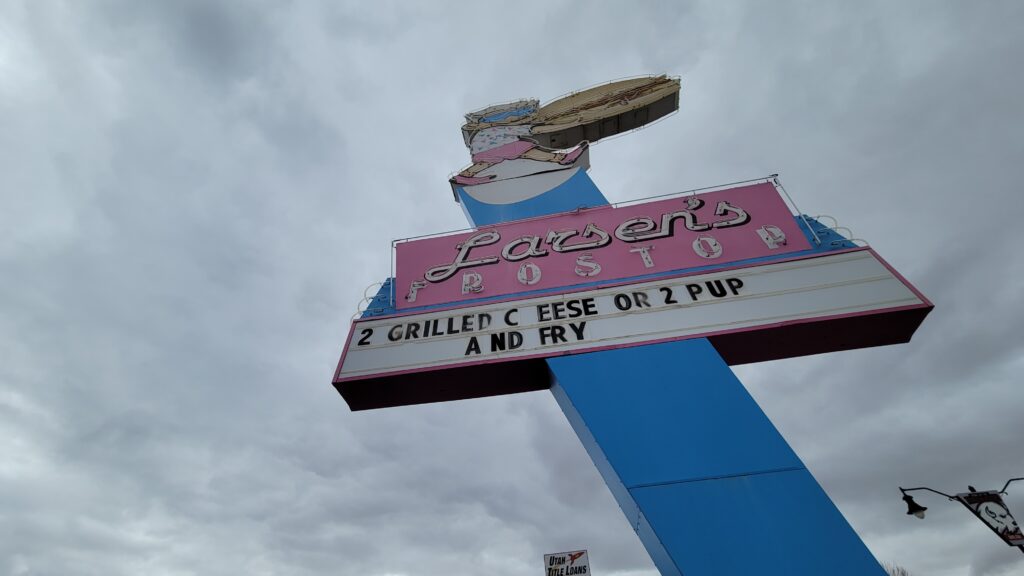 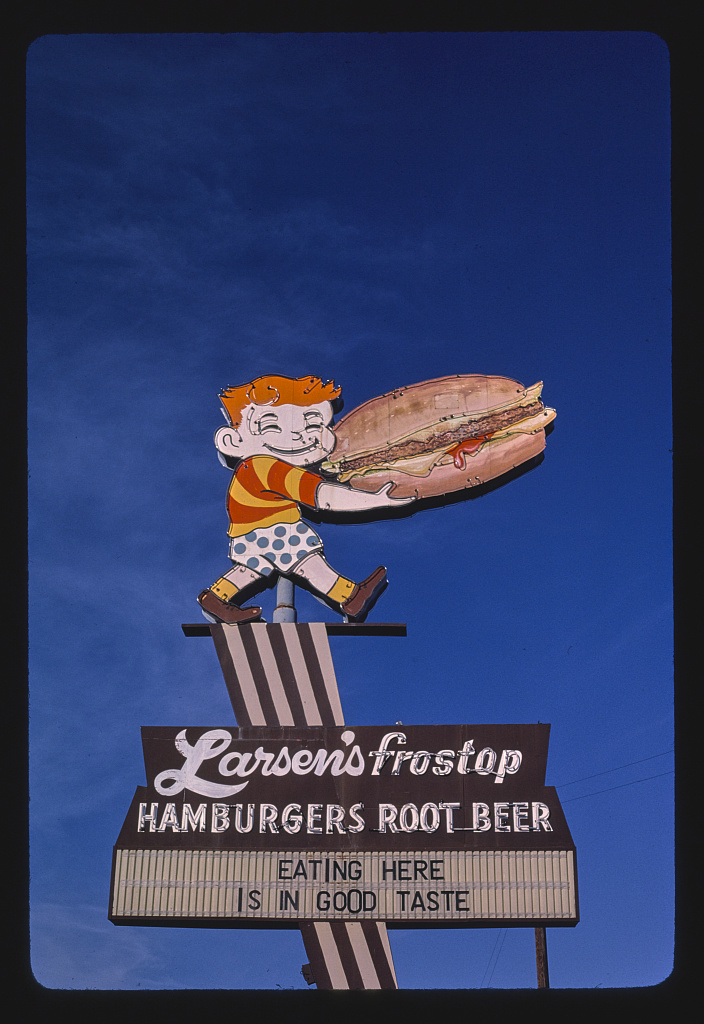 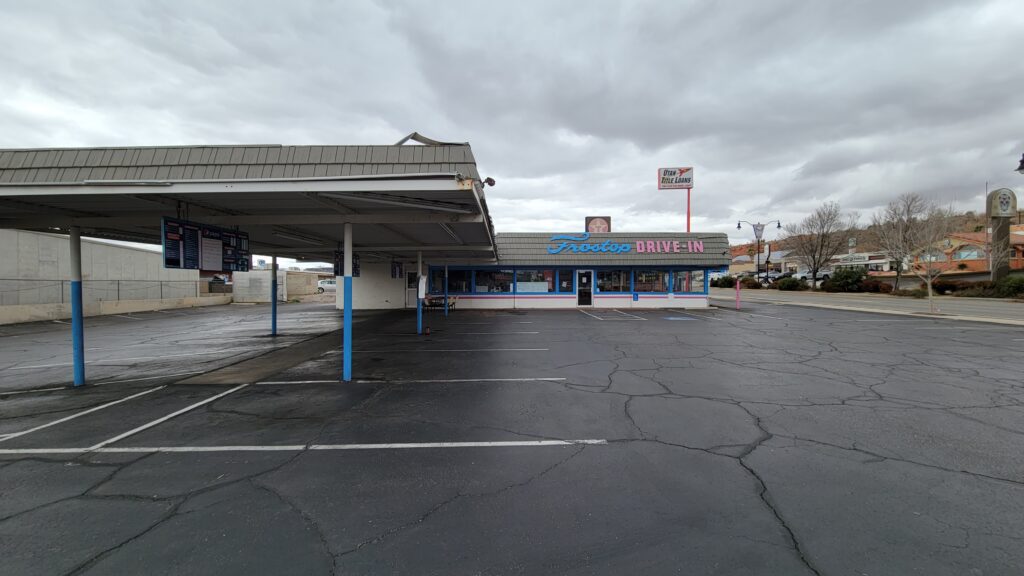 The closed Larsen's Frostop Drive-In sits empty as the property's new owners are looking for someone to operate or lease the restaurant, St. George, Utah, Dec. 28, 2021 | Photo by Chris Reed, St. George News 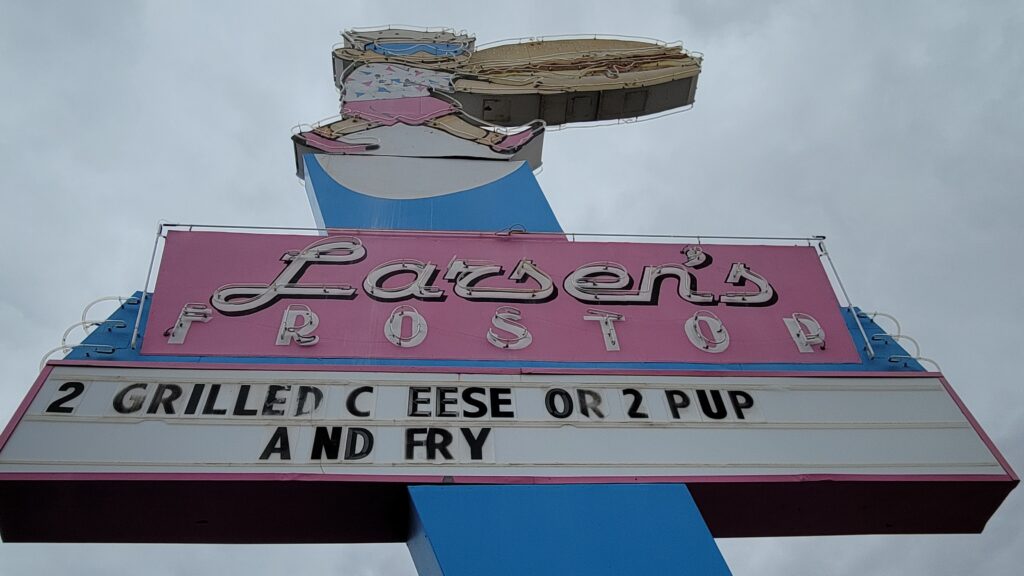 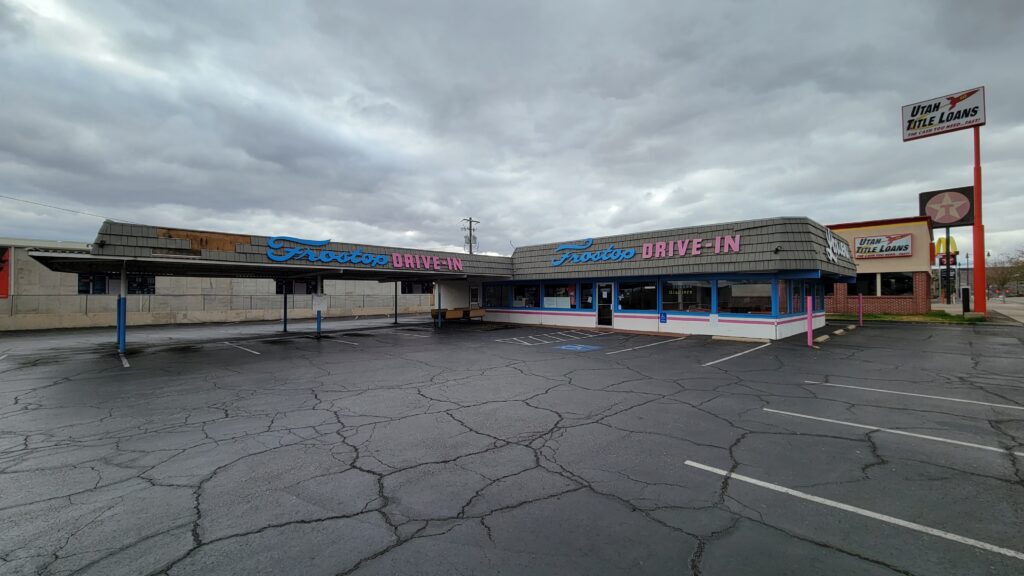 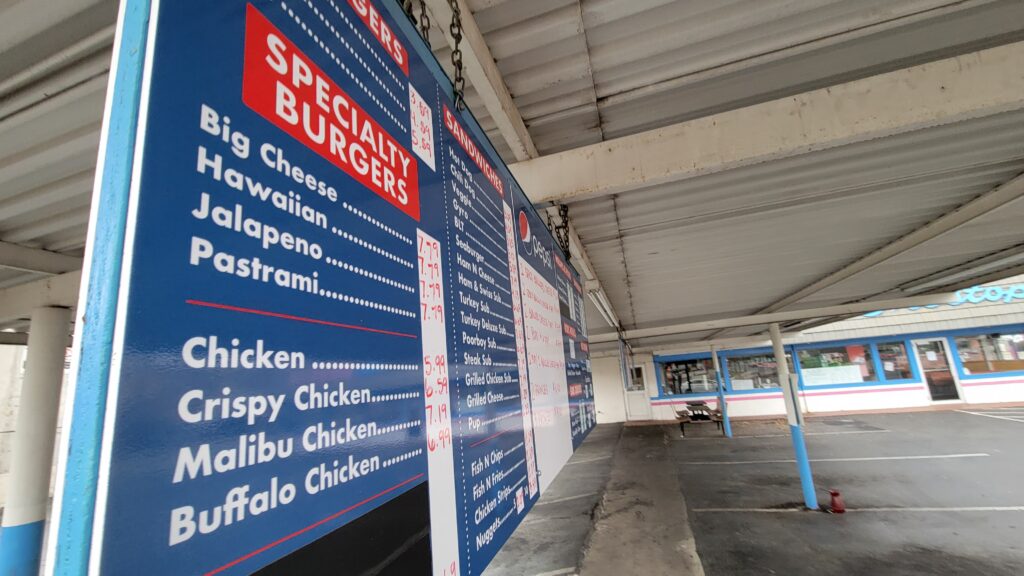 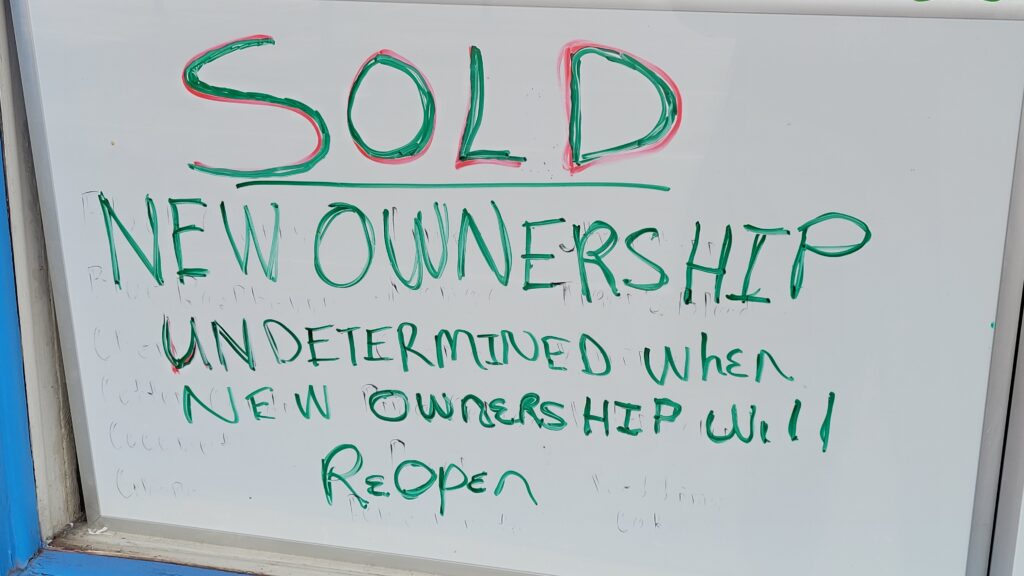 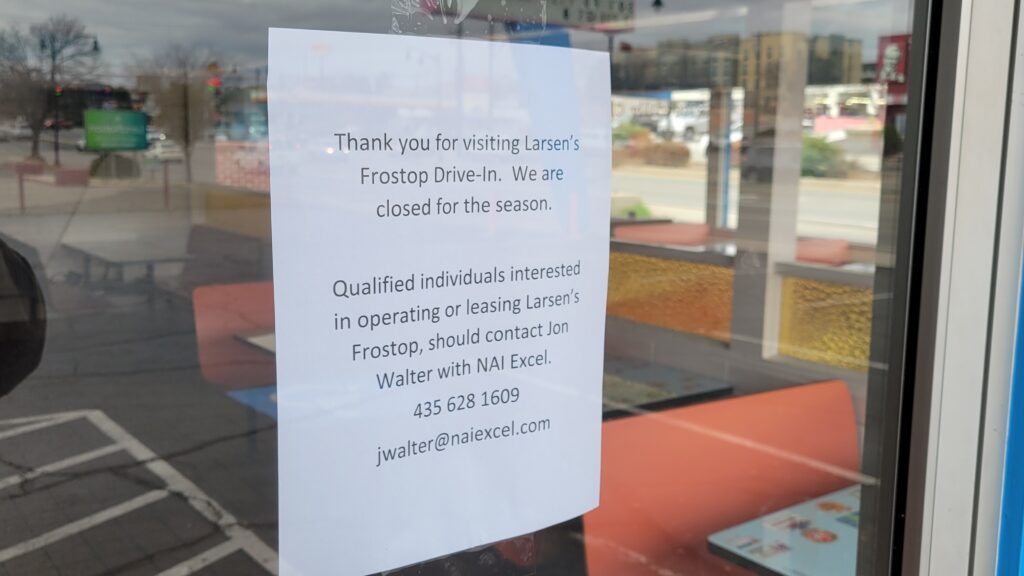 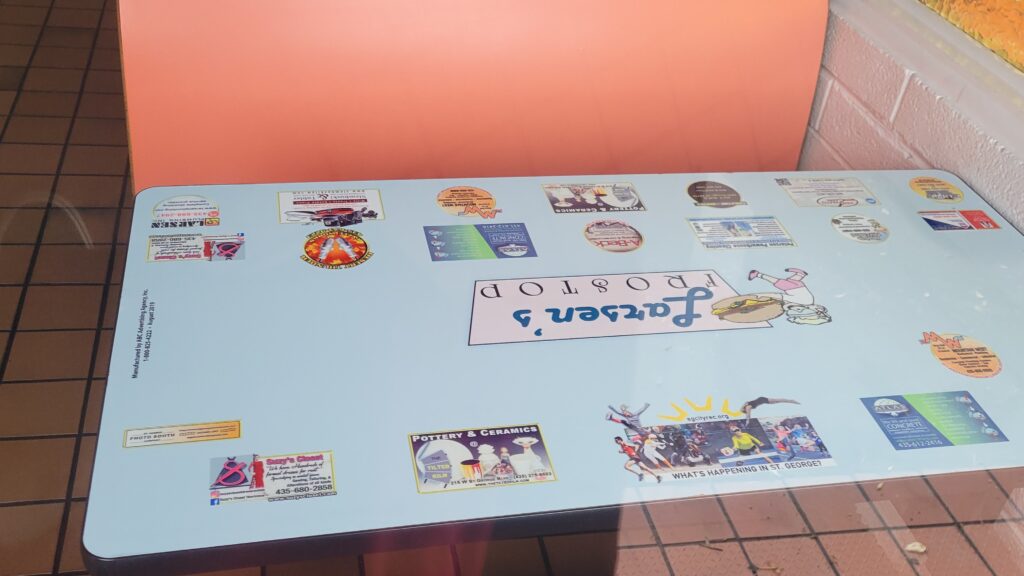 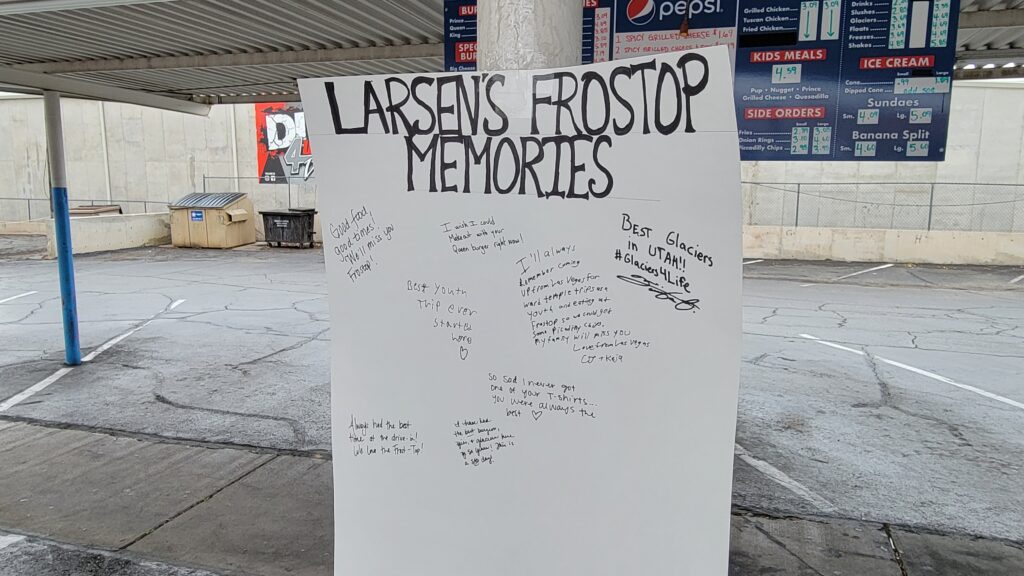 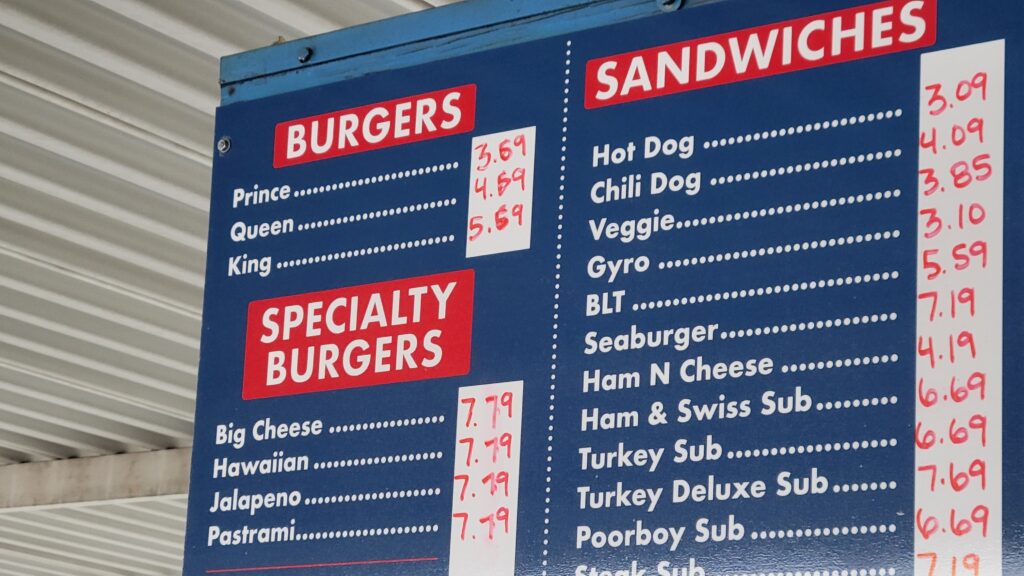