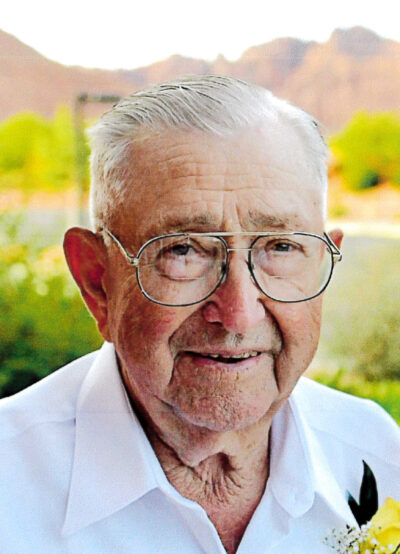 Jack C. Reber, 100, passed away Dec. 1, 2021. He was born June 16, 1921, in Santa Clara, Utah, to Ernest and Jetta Gubler Reber. At age four, he moved with his parents and sisters: Kathleen, and Shirley, to the Ivins Bench with two wagons carrying all their possessions. Kendle, Janice and Sandra came into their family later. The Reber’s were among the first 13 original families and lived in a “boarded up tent” while building their home. They were pioneers in every sense of the word! Jack was taught to be a hard worker from a young age. He attended school in Santa Clara through the 8th grade and high school in St. George – 9th-12th grades. He graduated from Dixie College in 1941, having studied welding and mechanics.

Jack married his sweetheart, Anna Belle Leavitt (from Gunlock) in the St. George Temple December 20, 1941. They immediately moved to Pasadena, California where he worked for two years welding aircraft. He joined the Navy and was accepted into the ship repair unit of the Sea Bees. After training in Bremerton, Washington he spent 13 months in Guam repairing ships that had been blown up by the Japanese during the war. He had immense love for his country.

Jack and Belle bought a small home in Ivins and after military service settled there to raise their family. They were proud parents of two boys and four girls: Robert (Nadine Olsen then Penny Smith), Steve (Trudy Barton), Caroline (Dick Payne), Norene (George Mackley), Annette (Ron Densley) and Shirlene (Dean Peterson). He was a mechanic in St. George for a few years and raised turkeys with his dad in Ivins. After they bought a farm on the Beryl Desert north of Enterprise, they raised potatoes, hay, and grain. Farming became his life’s work. Jack and Belle lived in Ivins but kept a 2nd home on the farm in Beryl, living there in summers. Jack always said the farm helped his kids learn how to work!

Jack was on the Ivin’s Town Council for many years. After becoming Mayor, Ivins was badly in debt, so a piece of property was sold to pay off debts. During his tenure the town put in a city park, built a firehouse, got a fire truck, completed a better water system, and started the flood dyke above town giving it a good rating for fire protection. The Irrigation Co deeded a piece of property for a city cemetery. The town put a cement canal from the Indian Reservation to Ivins providing dependable irrigation water. Jack always loved Ivins and was a great promoter. He was known for his prolific gardens and loved to share his beautiful produce with the whole town. He also loved to fish and attend the Temple.

Jack was a “People Person” and had a gift for gab. He loved his children, grandchildren, nieces, and nephews immensely and was dearly loved by his large posterity. Sadley, his first wife, Belle, died of bone cancer at the age of 59 in 1982. Atomic testing had taken its toll. He then married the former Johanna Owens. They were together for 26 years until her death in 2013. Jack loved Jesus Christ and was a devout member of The Church of Jesus Christ of Latter-day Saints. One of his greatest accomplishments was living to be 100 years old. He was optimistic and maintained a strong zest of life. He had a sharp mind and keen sense of humor all his days. He spent his last nearly six years at the Southern Utah Veteran’s Home and loved the people and view of the Big Red Mountain there. He had a great influence on many during his years and will be greatly missed by all who knew and loved him.

Live streaming webcast is available at www.metcalfmortuary.com by clicking on the obituary, then click on broadcast at the bottom. Webcast will remain on-line for 90 days.