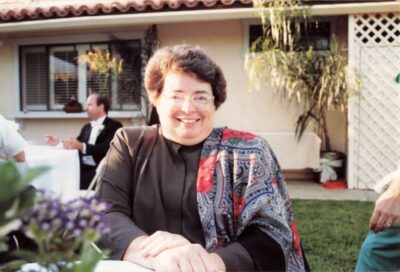 Dolores Ann “Dee” Patterson, 83, passed away suddenly and unexpectedly in her sleep on Monday, November 29, 2021. Dee was born on July 30, 1938 in Athens, Ohio to the late Joseph V. Howell and Mildred Irene Blazer Howell Kellstadt. She married her high school sweetheart James Robert “Jim” Patterson on August 25, 1956 in the Methodist Church at Frankfort, Ohio.

Dee was raised by her grandparents, Maude and Mid Blazer in the little Village of Roxabell, Ohio. She attended elementary and high school in the nearby Village of Frankfort for the grades 1 through 11 then moved to Columbus, Ohio to live with her mother and stepfather where she attended her senior year, graduating from Linden-McKinley High School in 1956.

Leap Year marriage proposal tradition – At the age of 16 in October 1954, Dee had started dating her then very shy classmate, Jim whom Dee had shared the same classroom throughout their school years in the small village of Frankfort, Ohio. That relationship continued and on “Leap Day” February 29, 1956, she explained her version of a Leap Day tradition to her sweetheart, Jim that it was a long-established tradition for young ladies to propose marriage to their sweethearts on Leap Day. So, on that day in 1956 Dee proposed to Jim. Not wanting to heart a young lady’s feelings, Jim gladly accepted her proposal. Marriage followed in August of 1956 and has endured for 65 wonderful years. Needless to say, her untimely passing has left Jim with a broken heart that may never be healed until that wonderful day when they meet again in their Heavenly Home!

Upon graduation from high school, Dee became a proud “Ohio Belle” when she was employed by Ohio Bell Telephone Company in Columbus, Ohio as a Long-Distance Telephone Operator. While Jim attended Ohio State University, Dee served as his cheerleader and contributed greatly to the financial support of their newly established little family of two.

In the spring of 1960, Jim and Dee, for as yet not fully understandable reasons, loaded up what possessions that their young marriage had accumulated and moved West. Phoenix, Arizona was their intended destination but ended up being beautiful San Diego, California. There, Dee continued her status as a “Belle” but this time with Pacific Bell in San Diego. Soon after arriving in San Diego, Jim began a new career in a completely new field with a San Diego based airline. For this young couple, life was wonderful for but a short time when in July 1961, Jim received a Draft Notice from his Ohio Draft Board. Jim then left Dee in San Diego in September 1961 to serve his country. After he finished Basic Training and Medic School in Texas, he was assigned a duty station at the Shepard AFB Hospital near Wichita Falls, Texas. Dee soon joined him in April of 1962. She still maintained her status as a “Belle” but this time for Southwestern Bell in Wichita Falls, Texas.

Dee was a person of many talents. First of all, she was an avid reader of books. Her home is filled with over 3,000 books and two Kindle’s with another 4,000 books. She loved to color which kept Jim and several friends busy trying to find new coloring books and pencils for her. She was an accomplished seamstress and crocheter who loved to create beautiful things from yards of materials threads of many colors. and She was an accomplished genealogist having worked in served as an assistant director of two different Church of Jesus Christ of Latter-day Saints Family History Centers for over 30 years, PTA President, Co-Ordinator of her Church’s Indian Placement Program in the Carlsbad, California Stake, served as the Relief Society Visiting Teacher Co-Ordinator for several wards for over 28 years. The best sweetheart and wife to Jim, her high school sweetheart, mother, not only to her biological children by to several other young ones of the years, a doting grandmother, great-grandmother ever. She was a loving, caring person for all she came in contact with. As the author of this obituary/Eu

After six long years of being childless, a daughter, Cynthia Ann Patterson was born on January 26, 1963 and a short two years later, a son, James Robert Patterson II was born. Both were born at the Sheppard AFB Hospital where Jim was on duty when they were born.

Dee was preceded in death by her parents and grandparents.

In lieu of flowers, donations may be made at the American Cancer Society or you favorite charity.

Arrangements are made under the direction of Spilsbury Mortuary, 110 S. Bluff St., St. George, Utah.

Friends and family are invited to sign Dee’s on-line guest book at www.spilsburymortuary.com.