In conjunction with Super Sprint Weekend, the event hosted triathletes from 17 different countries.

Former Olympian Joe Maloy, who competed in Rio De Janiero in 2016, is the Development Manager for USA Triathlon and he talked about the event with St. George News Saturday morning at the boat ramp next to Quail Creek Reservoir.

“I would think about it as a first step for a lot of these athletes,” Maloy said. “For some it’s their first big triathlon. For others who have been in the Olympics before, it’s a way to get rankings points so they can qualify to go again.”

The unique feature of the event was its classification as a draft legal race. Drafting occurs in bike races when one biker rides closely behind another to increase their combined speed.

“Most types of races don’t have that,” Maloy said. “It requires a lot of talented athletes to come together. It’s important that we have these opportunities for our athletes to race and learn the format.”

He went on to talk about other defining characteristics of the event.

“You don’t have to be crazy to do this,” Maloy said. “It’s a more accessible version of the sport in terms of distances.”

Olympic level triathlons consist of a 1,500 meter swim followed by a 40 kilometer bike ride and then finish with a 10 kilometer run.

Some of the races at Quail Creek were more user friendly and featured smaller distances in each portion of the triathlon. Inexperienced and recreational racers tested their abilities in those races.

Meanwhile, other races over the weekend were official distance and competition in them helped athletes accrue ranking points, which are used to determine who qualifies for national teams, and ultimately, the Olympics.

“So ranking points are very important, and this is a big deal for us,” Maloy said. “It’s a great opportunity for our athletes to score some of those ranking points that will help them progress along the track to compete in Paris and in Los Angeles (in 2024, and 2028, respectively).”

The 2021 Americas Triathlon Championships were originally scheduled to be held in the Dominican Republic, but COVID-19 concerns and restrictions forced it to be postponed.

That’s when race director Nat Harward stepped in and helped unify the effort to bring it to the St. George area.

“This is over a year in the making,” Harward said.

John Farra, High Performance General Manager for USA Triathlon, was thrilled to hear the race was coming to the St. George area.

“As a Utah resident, having everybody come to our state and have everybody experience this, so far we have a lot of smiling faces and they’re really happy to be here,” Farra said. “We’re really honored to be able to host it.”

As for the races, conditions at Quail Creek were pristine: clear skies, a hint of a breeze and warm temperatures.

The second Saturday morning race was the women’s super sprint elite development race. It featured smaller distances for athletes who just wanted to test their mettle in a triathlon.

“This is more just kind of for fun,” Sarah Darcel said. As a former swimmer at the University of California and a former member of the Canadian National Team, she said she wanted to visit St. George for the first time and see what competing in a triathlon is like.

Darcel showed her strength in swimming, taking an early lead in the reservoir and carrying that lead into the bike portion of the race.

“I was an IM’er (individual medley) in college so swimming is my forte,” Darcel said. “On the bike there was a girl ahead of me and we were drafting well together.”

“Then everyone blew by me in the run,” she added. “I need to work on my running a little more. But it was awesome, this is an awesome venue.”

Maren York participated in the race along with some of her teammates from the University of Colorado club team.

“We thought this would be a great race,” York said. “It’s elite enough where we can take it seriously and get some good competition and still use it as a good one to get our foot in the door with draft legal racing.”

She said that drafting on most college club courses is not legal.

“It was much more aggressive than I thought it would be,” York said. “As soon as I hit the water, I knew these girls were going to be gnarly out there- pulling, swimming over each other and splashing. We stayed together the whole time.”

But the experience was worth it.

“For my first one this is fun, a good one,” York said. “It drives me to keep training hard and to go faster on my next one.”

Saturday’s third race featured the elite men, so it was Olympic distance with athletes seeking to earn ranking points.

Mexico Olympian Irving Perez competed in Tokyo this past summer and he crossed the finish line first, seconds ahead of Canadian Charles Paquet.

“The course was very hard, I was pushing very fast,” Perez said. “Swimming all together was like a fishbowl, with boxing.”

Perez was first out of the water and first off of the bike.

“On the run I knew I needed to push very hard to win,” he said. “On the second lap the Canadian guy was behind me, and then he was ahead of me, and I said, ‘Bye bye.’”

But then he felt better and better on the following laps and was able to overtake Pasquet on the sixth and final lap.

“It was incredible, amazing,” Perez said. “Thank you Utah.”

“Obviously I was here to win, but I’m really happy with second place,” Paquet said. “The course was really hard, especially the run course. This was my first time in Utah and it is a nice place to race.”

“I’m pretty satisfied with my run, I gave it all I had today,” Reed said. “The course is definitely hard, probably the hardest one I’ve done. I did a decent job of trying to stick with the lead guys and not get caught by some of the other guys.”

As soon as he crossed the line, Reed sat down and took off his shoes, revealing his badly blistered toes. In an effort to save time, he hopped off the bike and didn’t put socks on before he started the run, and he paid for it.

“I didn’t really feel it, I was hurting in my legs more than my toes,” Reed said. “The joys of triathlon.” 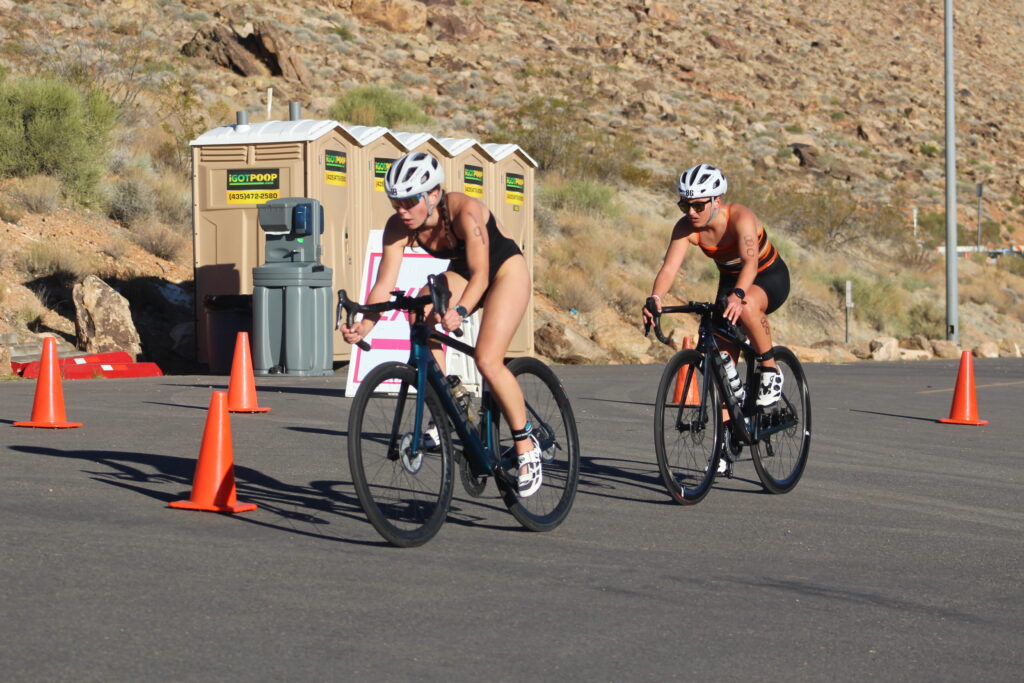 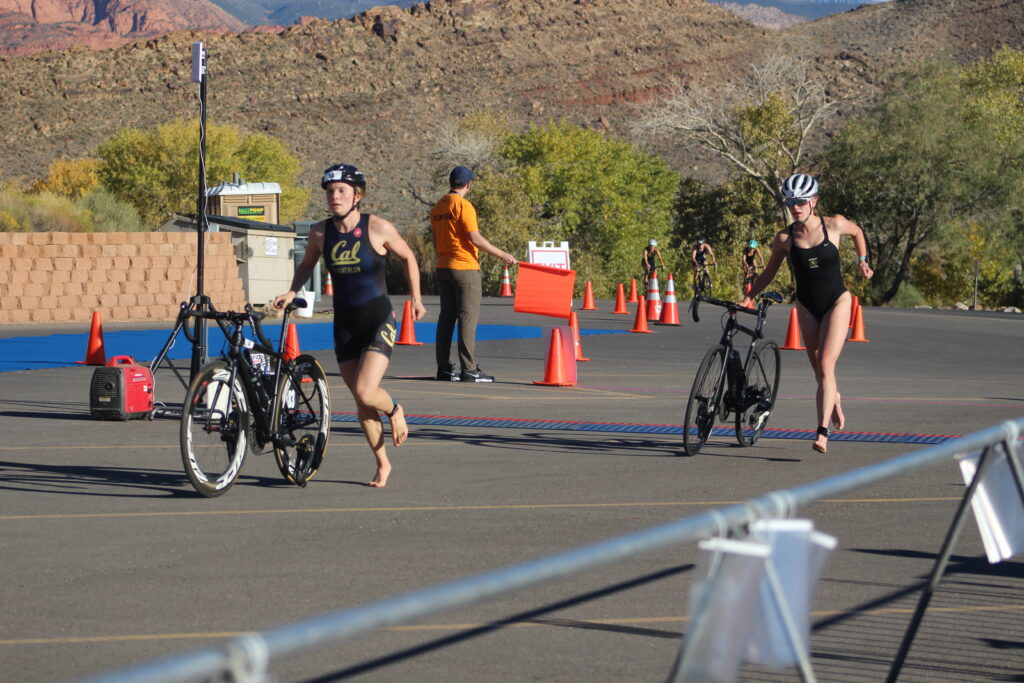 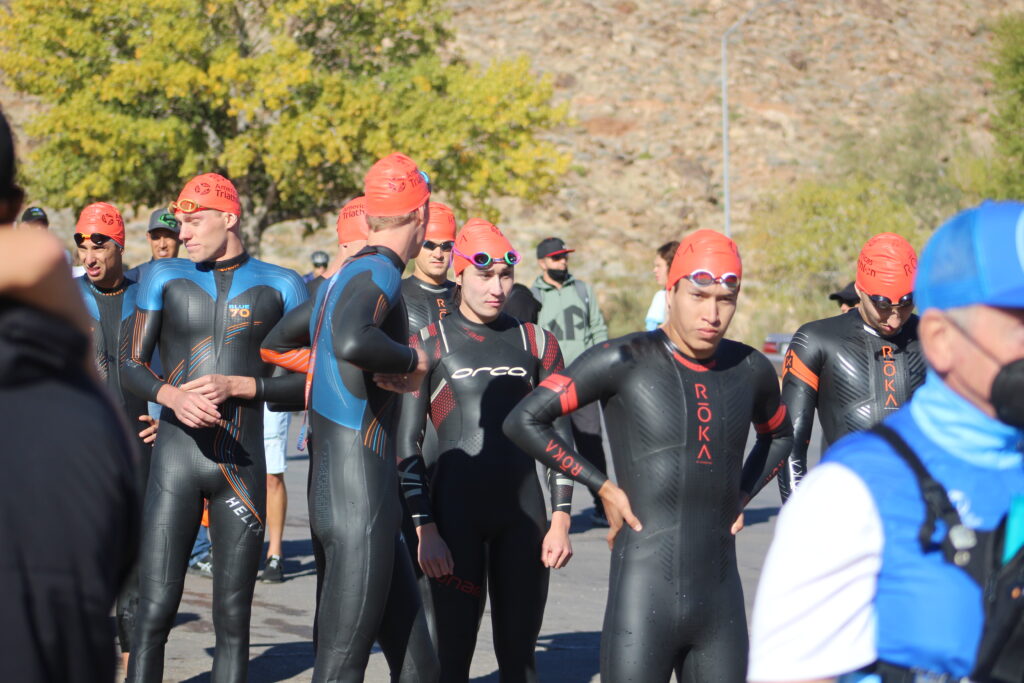 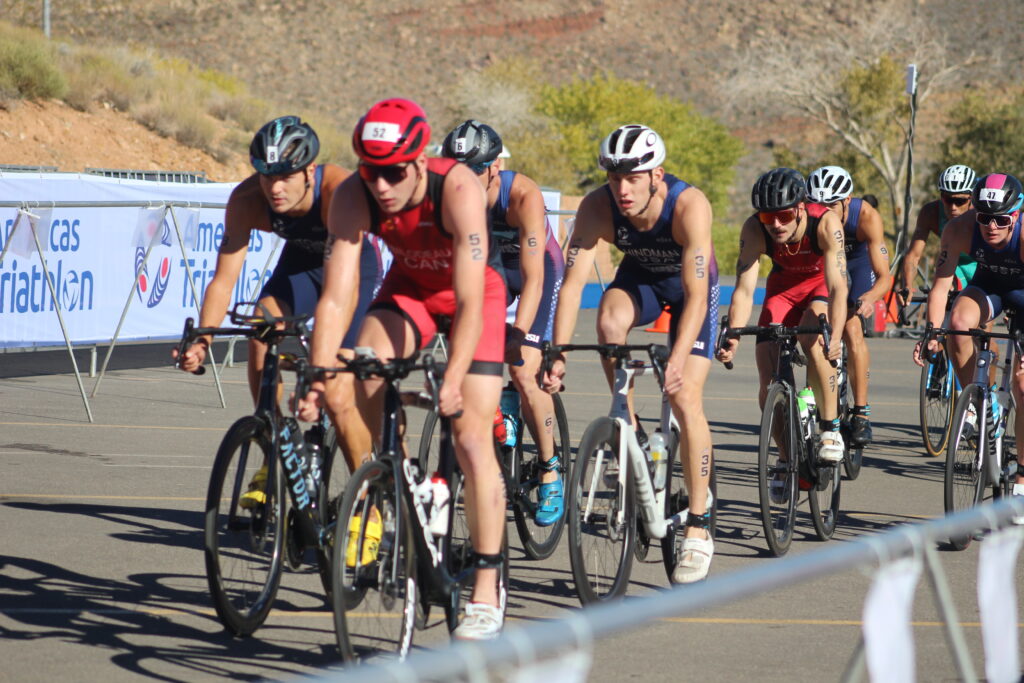 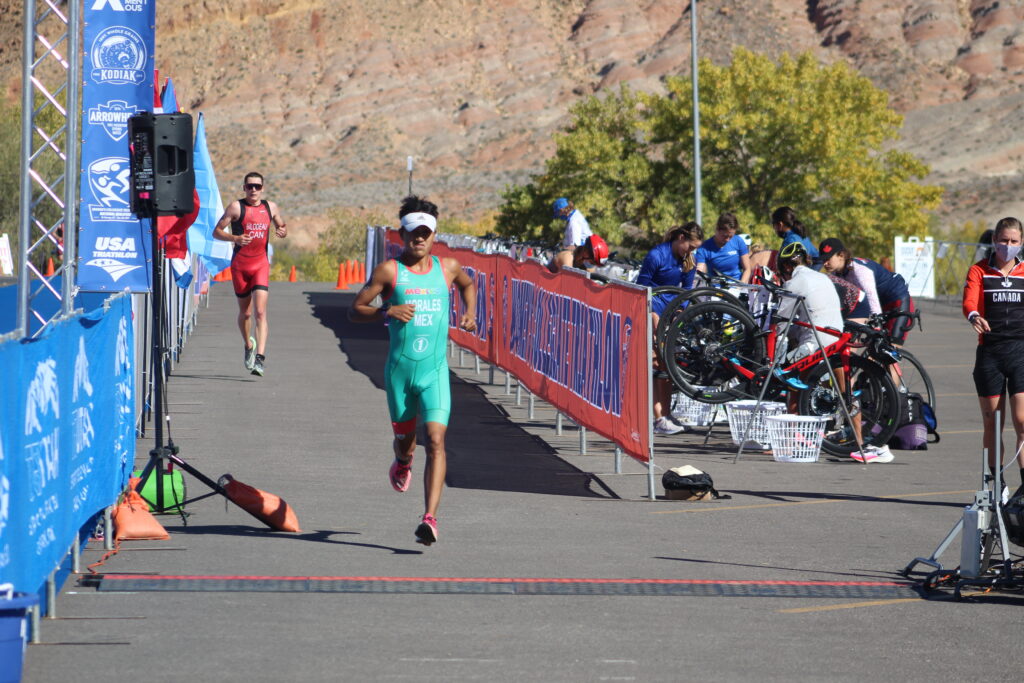 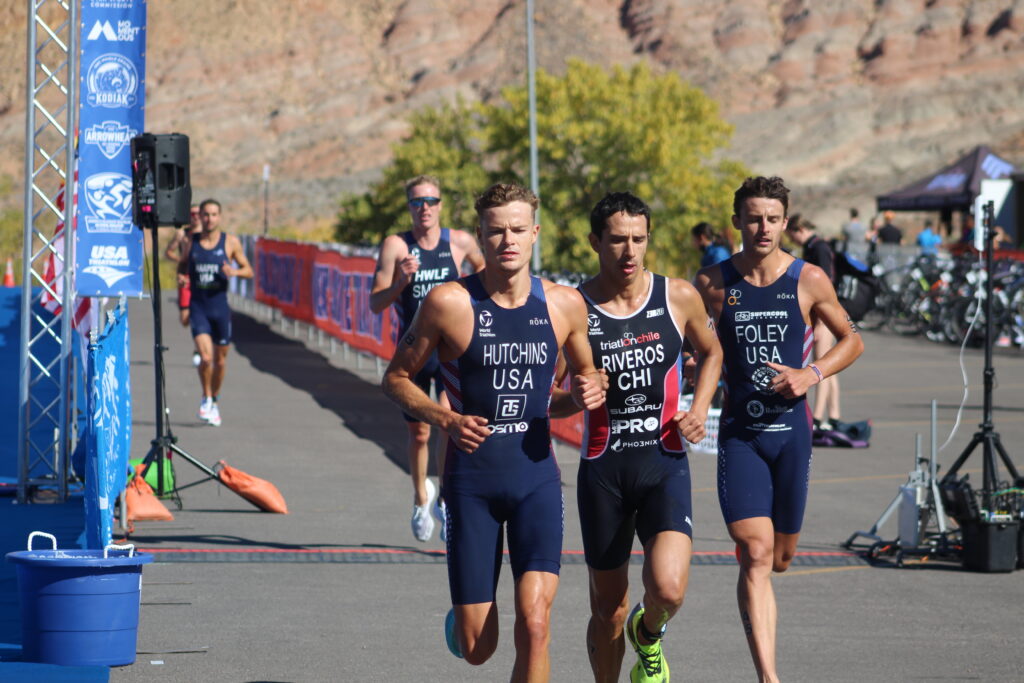 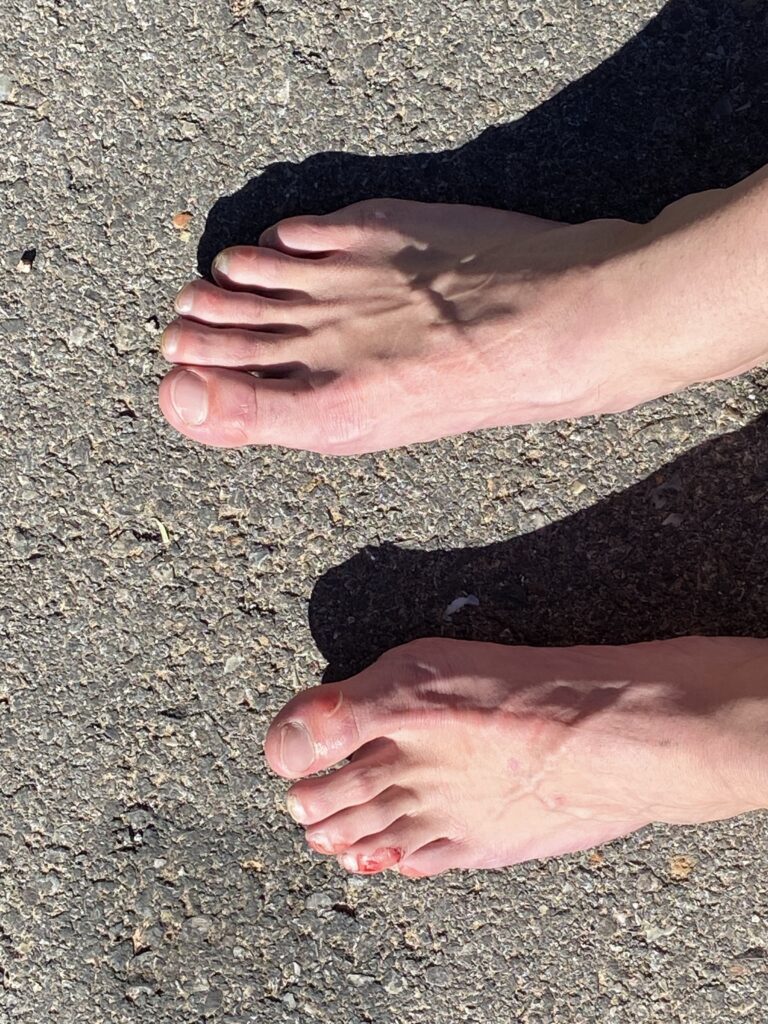