ST. GEORGE — Records were broken, personal bests were achieved and over 7,000 people took to the streets early Saturday for the 45th running of the St. George Marathon.

After the race last year was cancelled due to COVID restrictions, runners, participants and fans all talked about how happy they were to be back for what is considered one of the fastest, most fun marathons in the country.

“People are excited just to be out,” St. George Mayor Michele Randall told St. George News. “We want to be back to normal.”

The event began with the break-of-dawn Mayor’s Walk.

“It was fabulous,” Randall said. “It was shorter than it’s ever been because of the mini-marathon, but it was great. A lot of participants. It wasn’t quite a fast walk, it was a leisurely stroll. My kind of speed.”

That was just the beginning of the festivities as half-marathon and marathon runners started at 7 a.m. and poured across the finish line at Vernon Worthen Park up through the noon hour.

“It feels amazing, more just to be back running,” Metler said, barely winded as he took interviews at the finish line. “After last year’s COVID, I actually had COVID during the marathon last year, so I would have missed it either way.

“But just to be back running and see the community come out, the other runners, it was a perfect day, a beautiful day,” he added.

The win was a record fourth St. George Marathon title for Metler, who works as recreation coordinator for the city of St. George. He agreed that it’s fair to say he has a little home field advantage.

“I have a phenomenal support system, actually, you can’t beat it,” Metler said. “My coworkers took all the work so I could do this race today.”

Metler said that normally he’d be working a 2 a.m. morning shift until 8 or 9 o’clock at night.

“That’s what they’re doing today. They’re the real champions, working this event, putting it out for the community,” he added.

“At mile 11 I kind of felt like this could be my day,” Metler said. “Ended up working out pretty well. Had some cramping a little bit at mile 23 but I was able to fight through it a little bit and had a big enough lead to hold on.”

Metler said he loves representing St. George and the marathon is his favorite way to do that.

“St. George community, this one is for everybody here. It’s pretty cool,” Metler said.

“Honestly that was mentally one of the hardest ones I’ve done,” Cook said. “My stomach was just not cooperating. I actually threw up every single mile from 10 to the finish. I wanted to quit so many times.”

Cook is a veteran runner who won in St. George in 2016, so his physical condition had nothing to do with nerves.

“Every sip of water that I drank came right back up,” he said. “It was rough. But you know, I was able to persevere and I was able to run a pretty good time.”

Despite his problems, he kept pace behind Metler for much of the run.

“Aaron and I were together for the first seven or eight miles,” Cook said. “Then he got a little bit of a gap together. He was running strong. Hats off to him, he ran a great race, I just wasn’t able to stick with him today.”

Cook said he fought so hard through the sickness because he wanted to do well in a race he called his favorite.

“The organizers here put on the best race in the state,” Cook said. “I just love it.”

Dustin Bybee of Alpine was third across the line with his time of 2:20:03.

“I felt great through about 14, 15 miles,” Bybee said. “The course was great, the course was fast, it just got hard. Marathons are hard.”

Bybee said Metler was a little too far ahead during the run so he was tracking on Cook.

“I could see Riley in his fluorescent top, it was hard to see Aaron because he was in white,” Bybee said. “I was tracking on Riley and was with him for a little bit, but you run out of real estate.”

Bybee said the marathon is the kind that runners love, with a lot of flats and downhills.

“It’s a fast course,” he said. “It’s one that certainly pulls you and you have to be ready for the downhill, but if you are, you’re going to do well.”

Bybee is already looking forward to next year’s race.

“This is such a great event, the way they put it all on,” he said. “I was super disappointed we didn’t have it last year. And so it’s super great to be back. And excited to be back next year, too.”

Rounding out the top five finishers were Orem’s Jaydn Asay with his fourth-place time of 2:21:34, and a runner from Logan identified in all marathon results as Mark S. in fifth at 2:24:31.

After running pretty much her whole life and competing in high school and college, Kleven said, she suffered injury after injury and had some health problems so she never got the opportunity to run a marathon.

“Finally I felt like this is the time when I’m feeling strong and healthy to do it,” Kleven said. “And I wanted to do it in St. George because this one is probably the most exciting in Utah.”

Kleven said that she started feeling like she could win the race around mile 19.

Finishing second behind Kleven was Savannah Berry from Orem, with her time of 2:38:26. And then in third was St. George’s Ashley Paulson in 2:39:23.

Paulson said it was either her 14th or 15th St. George Marathon run and it was her 93rd career marathon. She won in St. George in 2018.

Everyone on the course could recognize Paulson with her flamboyant bright pink hair.

“I just kept hearing, ‘Go pink! Go pink!’” Paulson joked after she crossed the finish line. “And it just makes my heart happy. I can’t change my hair now because I get so many cheers!”

Paulson was as amazed as everyone else that Kleven set a course record in her very first marathon.

“When she passed me at Veyo, I could tell she was just solid and she was going to hold it,” Paulson said. “My goal today was simply to run my own race. If I was able to catch up to her running my race, amazing.”

She added that she was able to meet her personal goal and it didn’t matter where she finished if that was the case.

“The win isn’t always crossing the finish line first,” Paulson said. “For me it’s about accomplishing my goals. And today I got my sub-2:40, barely, but I did it and that’s a win for me. So I was thrilled. So thrilled.”

Paulson has a special place in her heart for the St. George Marathon after running in her first marathon here 21 years ago.

“It’s hands down my favorite,” she said. “When it was taken away from us last year, you just can’t help but savor every second of it now. You don’t know what you have until it’s gone, right? That is so true. Savor it, and don’t take it for granted.”

Finishing in fourth after Paulson was Sarah Cummings from Park City, who posted a time of 2:40:59. And rounding out the top five was Ogden’s Jackie Hendrickson and her time of 2:42:59.

“The course is beautiful,” Hendrickson said. “The rolling hills, you have to learn how to play with them and be okay going a little slower on the uphill and fast on the downhill.”

After keeping up with the leaders at the beginning of the race, Hendrickson got separated from the frontrunners at Veyo but was able to track them to the finish line.

This was the second time around for Hendrickson after running in St. George the year before it was cancelled.

“This was way better and way more energy,” she said. “Way more excitement. I definitely want to come back.” 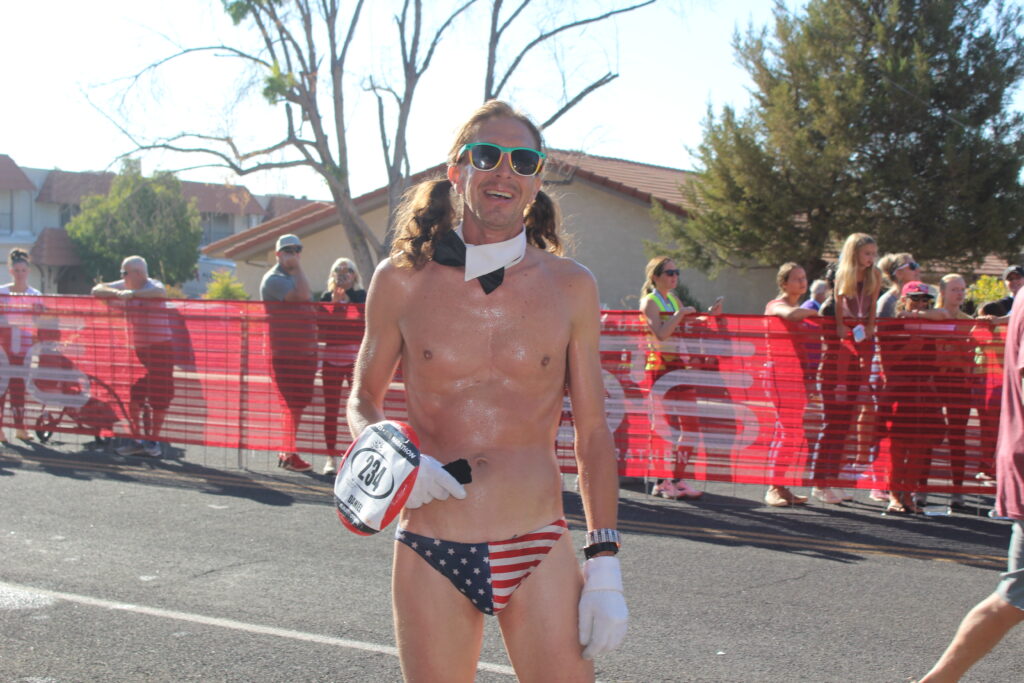 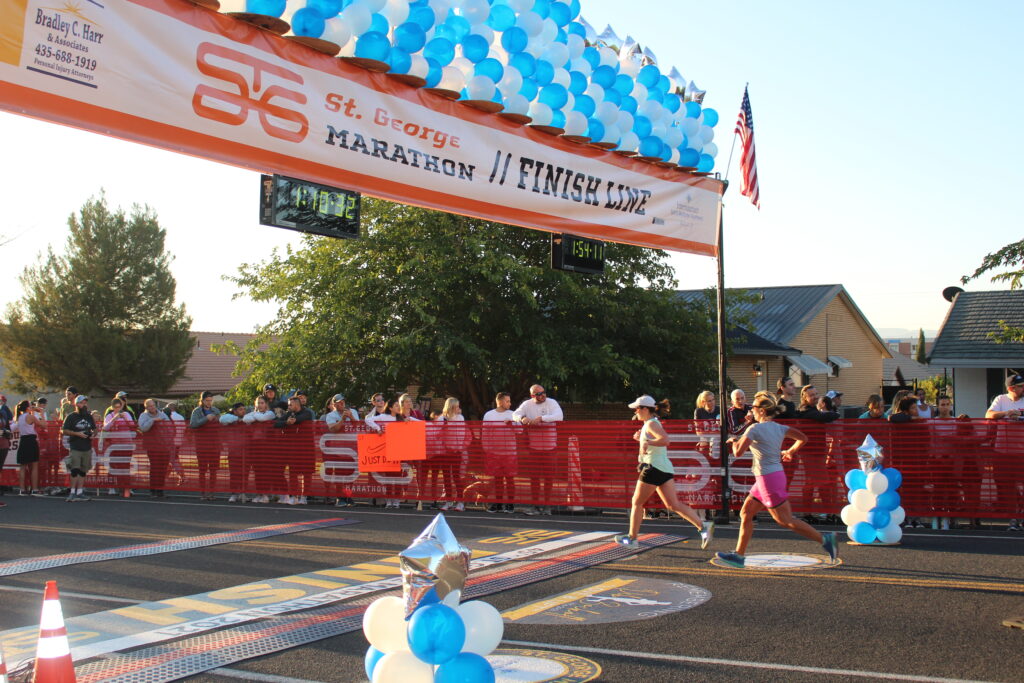 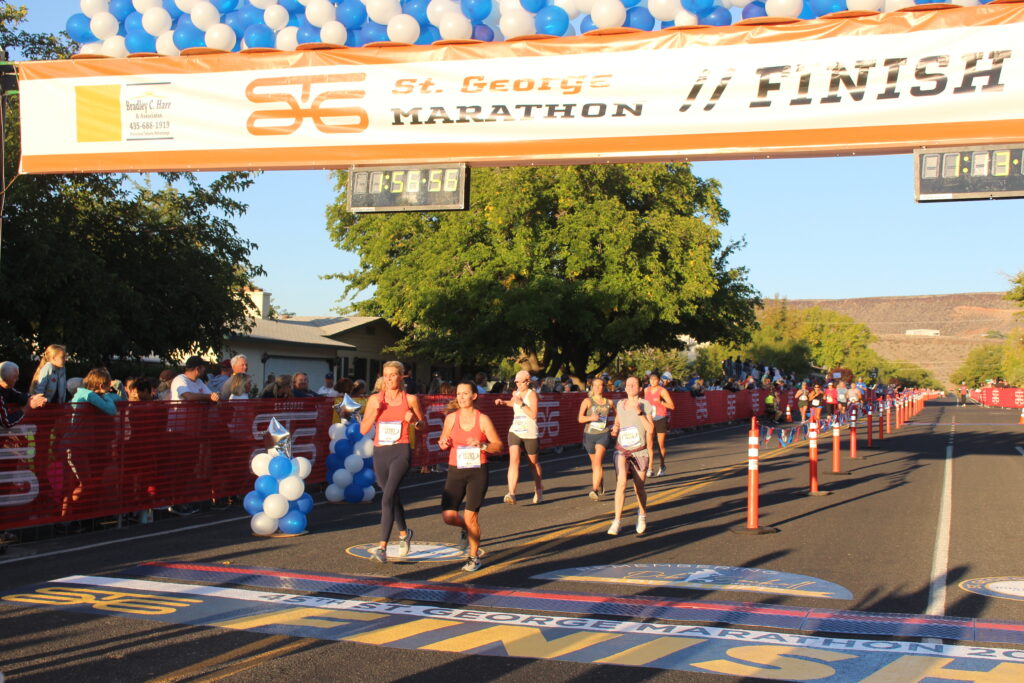 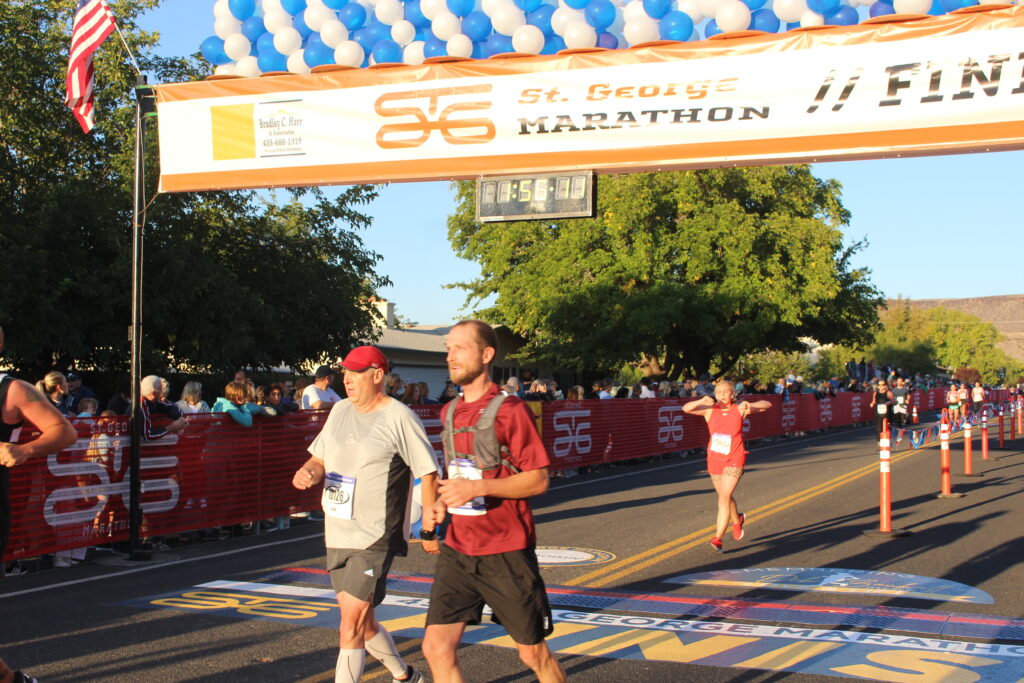 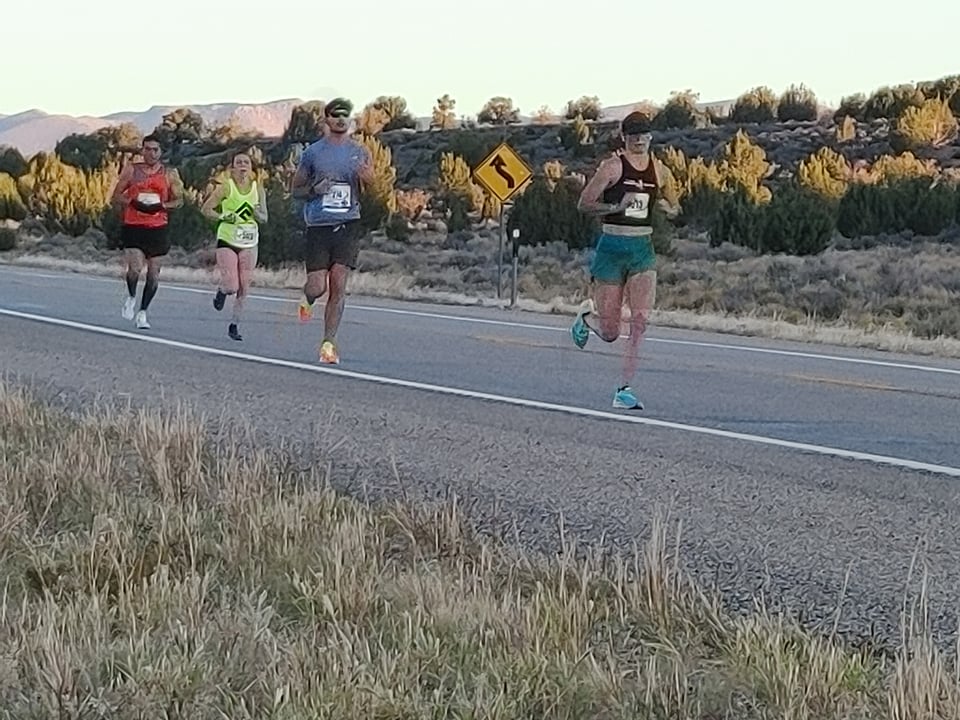 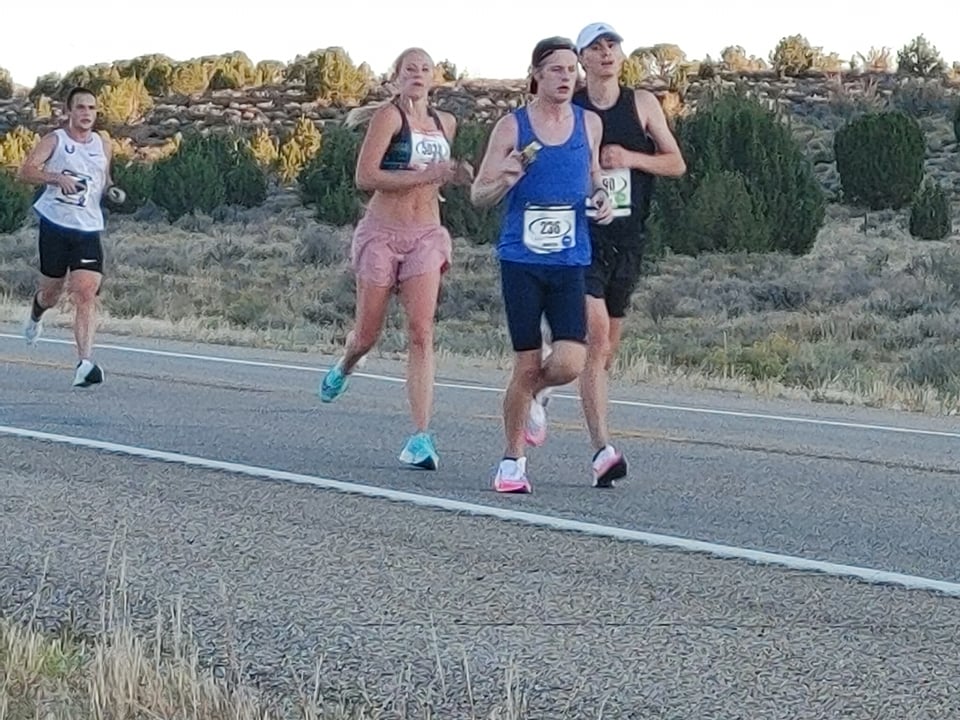 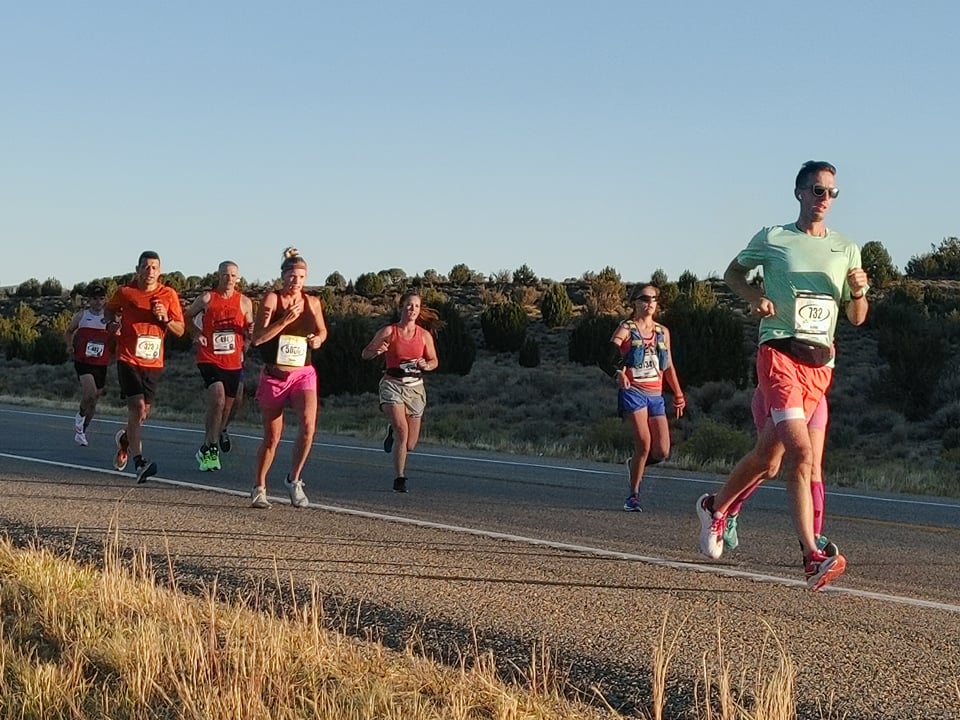 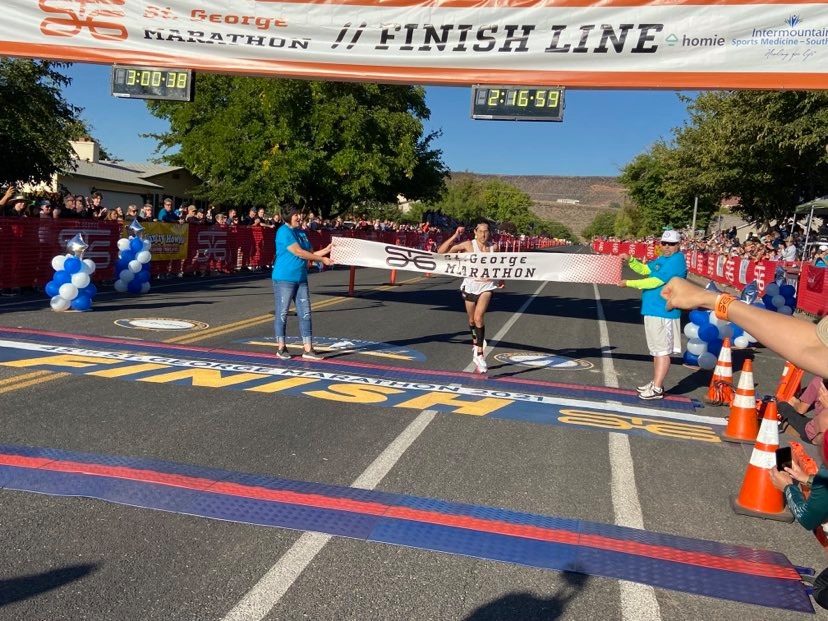 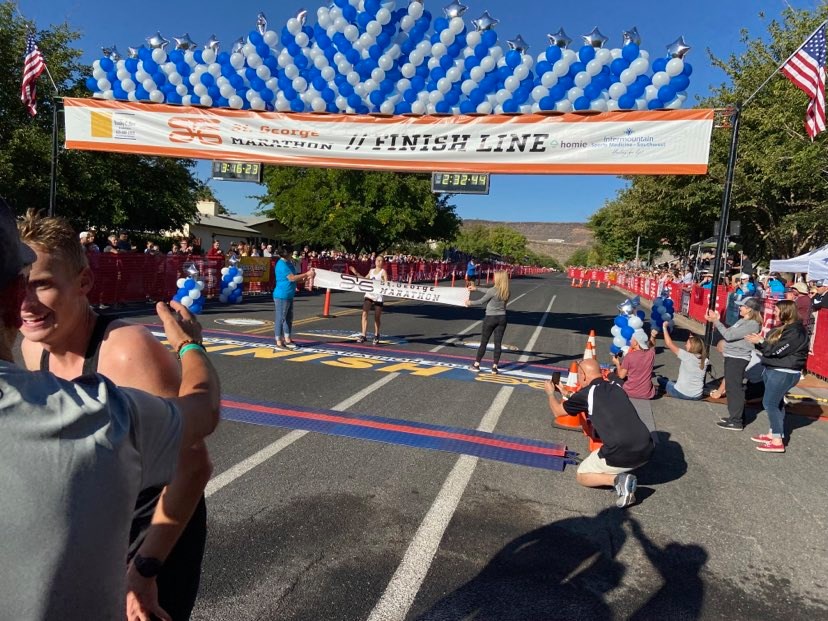 St. George Half Marathon turns 40, welcomes runners from throughout Utah and the Intermountain West