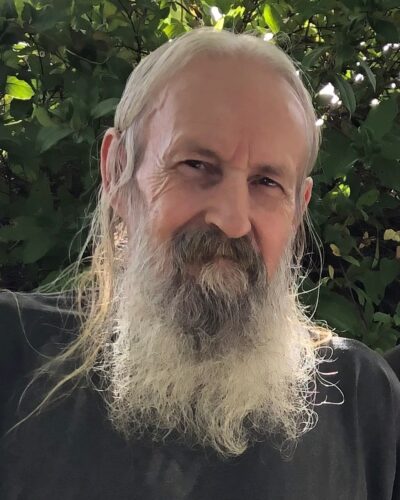 Kevin was raised mostly in Provo, Utah, as a member of the Church of Jesus Christ of Latter-day Saints. He graduated from Provo High School in 1973. Kevin attended Utah State University and trained for his career as an Electrician with IBEW.  He found success as a tradesman and was a craftsman in his own right. He also proved to be an amateur geologist.

Kevin’s ultimate goal was to have a family. He stepped into an instant family who gave his life light. He was kept busy teaching, learning, going on adventures, and exploring a new kind of love. His love grew in abundance, when his biological children, Alison and Jesse were born. His love grew greater still when he was reunited with his daughter, Jaimee, later in life. Kevin’s greatest reward was his 23 grandchildren and four great-grandchildren. Kevin sure loved to spend time with his grandkids!

Kevin was well-read, intelligent, thoughtful, gentle, kind and funny- as his many friends will attest.  He loved the outdoors and could be found combing the desert for rocks, antiques, and anything he considered to be ‘good junk’. He knew the names and locations of the many rocks he collected and could talk for hours on the subject.

He photographed everything he saw and saw beauty in everything. His love of music was reflected in his extensive record collection. He loved playing & watching sports and was an avid Dodgers fan. He found great fulfillment in keeping his green 1970 Chevy Suburban up and running.

Graveside Memorial Service will be held on Oct. 1, 2021, at 3 p.m.in the Santa Clara City Cemetery, 1950 Ancestry Way., Santa Clara, Utah. We will be meeting to share memories and stories of Kevin from 5-8 p.m. at the Baker Dam Campground in Veyo, Utah. A light meal will be served, feel free to bring a side dish to share, if you like.

We would like to express our overwhelming gratitude to Kevin’s sister, Judy Jenson, who has served her family with years of selfless service. We would also like to thank Kevin’s brothers, Marv, for helping with legal matters; and Gary, for transporting him to and from the hospital and tending to his home.

Friends and family are invited to sign Kevin’s online guest book at: www.spilsburymortuary.com

Reservations for overnight camping at Baker Dam Campground can be made at: https://www.recreation.gov/camping/campgrounds/10085599

A tiny minnow, a big pipeline and a growing water demand