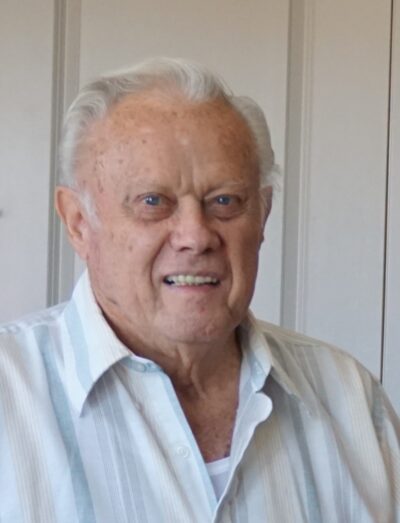 He grew up in Salt Lake City, graduating from South High School in 1947. He attended U of U studying Electronics. He worked at Bennet Ford as a Radio Electronics Technician. While working there he met his wife, Muriel. He started work at Petty Ford as a department head after they were married.

They made their first home in Bountiful, Utah. They lived there for 18 years raising their family, then spent two years in Salt Lake City before buying and running a dairy farm in Fairview. When they sold the dairy, he built homes and later bought a Peterbilt Semitruck and drove it for several years. After 20 years in Fairview, they moved to Orem where he co-owned a computer store with his son.

When they opened a store in St. George, he moved to La Verkin. He later sold the St. George store and worked for The Boulevard repairing appliances. He was in his early 80’s when he retired. Deciding he didn’t like being retired he went to work for Walmart in the Electronics Department, retiring on his 90th birthday.

He was preceded in death by his parents, and grandson Matthew Newson.

We would like to thank his caregivers in the cardiac unit at St George Regional Hospital and Applegate Homecare and Hospice for all the love and care they showed him.

Father, son who died following I-15 rollover in Enoch were members of prominent Bangerter family