ST. GEORGE — In 25 years, the Hawk 95.9 has become well known as Southern Utah’s number one station for classic rock. 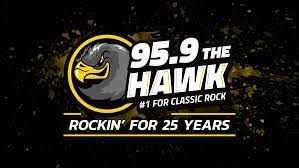 Jan. 20 marked the beginning of the station’s 25th year. The celebration is going on all year long with prizes, shout-outs from special guests and an appropriate daily dose of music, which is the key ingredient to bringing the station’s listeners and its air staff together.

Unlike many radio stations who have changed their music format over the years, shifting from genre to genre, things at The Hawk are done pretty much the same as they were 25 years ago. General Manager Ben Lindquist told St. George News that it speaks volumes about the listeners of the station and how easy it is for the station to connect with them through the music.

“It’s a lifestyle, it’s nostalgic, it takes you back and to me, it’s some of the greatest music that we have on our radio stations, just because it’s stood the test of time,” Lindquist said. “35,000 people a week listen to the station and that’s really powerful. And it’s just grown and grown and grown every single year.”

While the station has evolved in listenership, staff and employment, the music it plays has mostly stayed the same. “The beauty of classic rock is that it spans generations”, Lindquist said. “Some listeners call in and reminisce about the first time they heard a certain song, riding in their car in the summer of 1981. Younger listeners who have discovered classic rock through Guitar Hero or by listening to their parent’s CDs can also appreciate it,” Lindquist said.

Midday host Lauren Stone agreed. She said that the music is timeless, and she loves seeing teenagers wearing t-shirts with famous rock bands on the front or enjoying the music. Sharing a love for the music is how the station makes its connections with listeners, she said.

“It makes such a difference because we’re local,” Stone said. “We try to be loud and local. That’s the great thing about radio is that you can make those connections.”

Since its inception, The Hawk has prided itself on its live remote broadcasts and events where the public can meet and interact with the DJs. Stone said it’s great to put the faces to the names of people who have called or texted in during her show to request a song.

Remote broadcasts are where the public can interact the most with the DJs, because on the air, the hosts only talk for a few minutes at a time. For the rest of their set, they play music. Morning host Bill Cash said that at the end of the day, that’s what he’s there to do. Even on holidays, he feels he owes it to the listeners to play music that they want to hear, not just talk at them, because while the station’s staff may change, there will always be people to hear the music.

“People, I just think, care about the radio station,” he said. “They may not even say they feel like they own it, but they do. They know the music and the air personalities, especially a guy like Brett (Stevens) who’s been on The Hawk for nearly 20 years.”

Listeners can interact with the station almost anywhere at pretty much anytime. The shows are streamed live online and on its app. Listeners can call or text the station to request a song, ask for more information about the show or a song, or just to say hi.

St. George resident Leslee Fuscsick has been a listener for the past four years after moving to the area with her husband from Denver. She said she was happy to find a decent radio station here with some variety that played songs she normally doesn’t hear on other radio stations.

“They are very good at responding to requests,” Fuscsick said. “They’re my go-to people for that. I think more people should do it. It’s just a good way to widen people’s views of music. Everything isn’t just the same three or four bands over and over.”

Cedar City resident Thomas Little said he also enjoys the station’s quick responses to listeners. For the past 20 years, Little and his coworkers have been listening to the station from their shop where they work and trying to beat the several thousand other callers to be the ones to win a giveaway.

“They’re paying attention to their listeners,” Little said, adding that whenever he texts the studio to ask about a song, the DJ responds quickly and lets him know when they’re about to play his request so he can listen for it. “They play music that I kind of came of age with, that I’m used to and familiar with. It’s real music to me.”

“We refer to it as the lean-in,” he said. “They hear a band that they’re familiar with, but maybe it’s a track they haven’t heard in a really long time and they have that, ‘Oh wait a minute’ moment. And you’ve got ‘em.”

'We want to give back to the community'; Canyon Media radio stations holding contests, giving away money

What's in a job: 1 man keeps 21 radio stations on the air for you