ST. GEORGE — The San Diego District Attorney’s Office recognized Utah’s violent fugitive task force with its highest commendation to the group made up of federal and state law enforcement officers – including three in Washington City following the arrest of a fugitive wanted for allegedly kidnapping a 4-year-old child.

The commendation was issued by Commander Bao D. Luu with the San Diego District Attorney’s Office, and then sent to Chief Deputy U.S. Marshals John Murphy and Pat Thompson, along with more than a dozen members of Utah’s Violent Fugitive Apprehension Strike Force, (VFAST), which is comprised of U. S. Marshals Service agents and local law enforcement officers from agencies scattered throughout the state.

Three strike force members commended for their efforts hail from the Washington City Police Department – Lt. Matt Page, Sgt. Tyson Dove and Sgt. Trevor Edwards, all of whom are cross-deputized members of VFAST.

Luu also commended each officer’s “tireless commitment to recovering an abducted child, and  congratulated them on a job well done.

The commendation was issued in connection with a 2020 case involving the abduction of a 4-year-old boy who was taken from his home in San Diego California in August of last year. Authorities in California were unable to locate the child, nor did they have any information on the location of Robert Preston Crowe, a San Diego resident and the child’s father. The strike force’s efforts led to the suspect’s arrest and the return of the child.

Details surrounding the case were also outlined in the letter of the events that took place leading up to the arrest.

The case was filed with the Child Abduction Unit, a division within the San Diego County District Attorney’s Office, on Sept. 2, 2020,  when the child’s mother reported that her son was taken by Robert Preston Crowe, a San Diego resident and the child’s father, during a four day visit to the area one week earlier.

The mother told authorities she agreed to allow Crowe the extra visitation time with the child, but soon after, Crow called to tell her he would not be returning the child, and then he disconnected his phones and stopped answering any emails immediately after the call.

Investigators then uncovered Crowe’s prior criminal record that included convictions as well as open cases, and they also discovered reports containing allegations of physical abuse.

The father and child were then listed on the national crime information database, accessible by law enforcement nationwide, and details of the case were sent to the Missing and Unidentified Persons Section of the California Department of Justice. The alert was also posted on the National Center for Exploited and Missing Children website.

After more than nine months of searching and following up on multiple leads, the suspect remained at large, and when investigators in San Diego were unable to locate the pair, they reached out to the Marshals Service for help.

On April 14, the Marshals Service received information on a possible location for the suspect in Southern Utah. That information was relayed t0 authorities in San Diego and the Utah strike force was deployed.

Strike force agents set out to locate the suspect who was believed to be in a remote area in Apple Valley, and while they had an approximate location for Crowe, Thompson said, the search area was vast and remote, which made the mission more difficult.

That same day, the Utah Department of Public Safety sent a helicopter to Washington County to help with an aerial search, followed by a fixed-wing aircraft that also flew the area.

Miraculously, Thompson said, the truck the suspect was driving was spotted during one of the flyovers, which provided GPS coordinates that helped to pinpoint the site where authorities believed the suspect was camping with the boy.

The team, riding all-terrain vehicles, made their way through the remote valley until the approached the campsite and spotted the suspect. Crowe was taken into custody without further incident, and the child was recovered safely.

Thompson said when he called the San Diego office to advise them of the arrest, agents there were shocked to hear the suspect was already in custody – one day after they were notified there might be a possible location for the suspect.

“When I said we had Crowe in custody, all I could hear was ‘unbelievable’ on the other end of the line,” Thompson recalled from his conversation with the District Attorney’s Office in California.

The suspect was booked into jail in Washington County, where he remained for more than two months before being extradited to San Diego to answer to the charges.

The child was returned to his mother in California, who by then had not seen or heard from her son in over 10 months.

Washington City Police Chief Jason Williams said the commendation is the highest award that is presented by the San Diego District Attorney’s Office, and commended his officers for their efforts on the case, and even posted a photo on the department’s Facebook page.

In total, 14 officers and agents received the commendation from San Diego, including St. George Police Detective Josh Wilson, Washington County Sheriff’s Deputy Dan Montgomery and four agents with the Bureau of Land Management and five from Immigrations and Customs Enforcement. The Department of Public Safety’s Air Support Division was also given an honorable mention.

The April operation illustrated the collaborative effort that goes into the strike force, Thompson said, and the agility to work with local enforcement agencies is what makes the team so successful. He went on to say that each member brings their own talents, knowledge of the local area and other resources to the table – which is some of the vital components needed in effective fugitive apprehension.

Utah’s Violent Fugitive Apprehension Strike Team (VFAST)  team is under the direction of the Marshals Service that works with state and local police agencies in apprehending fugitives wanted for violent crimes.

A complete list of the officers involved can be viewed in the gallery below. 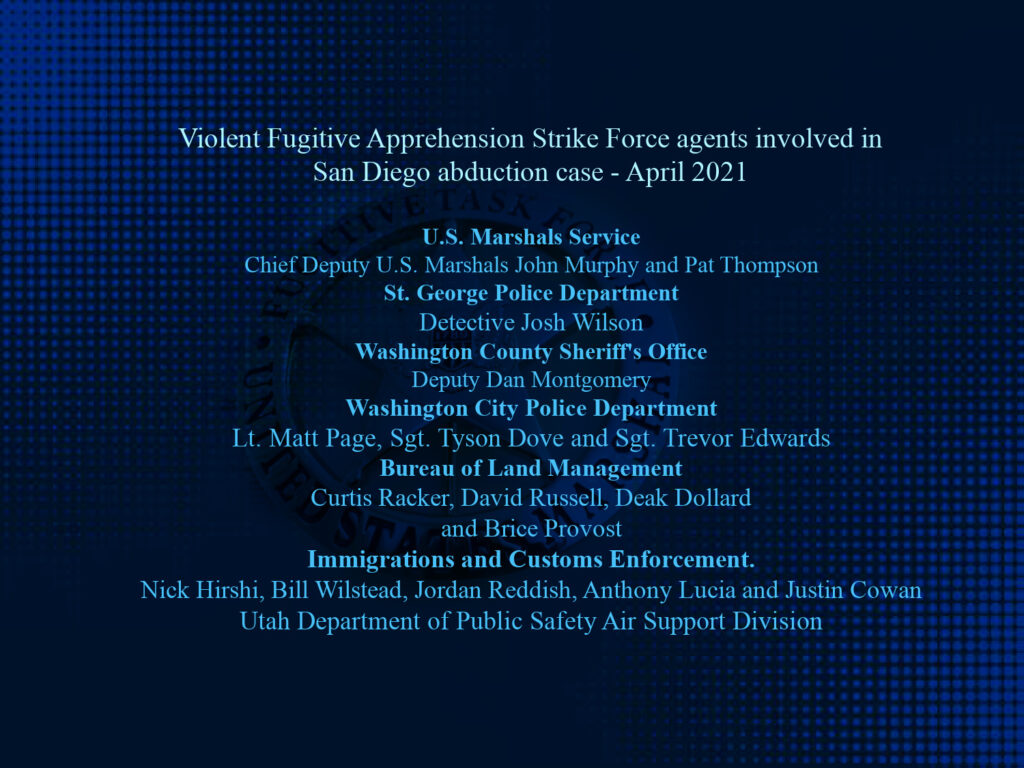 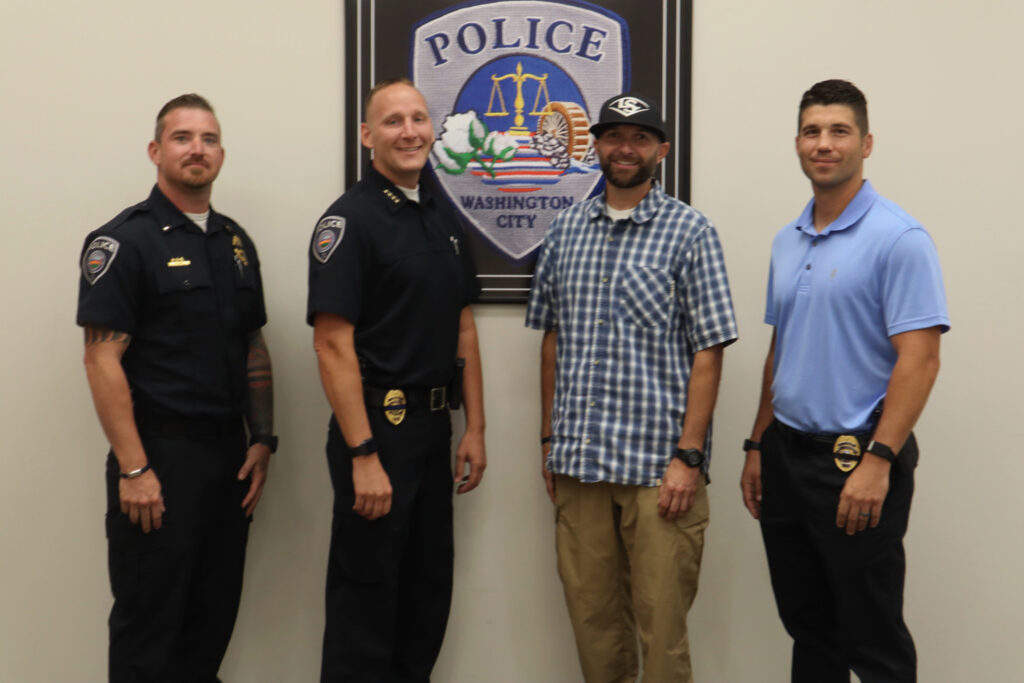