ST. GEORGE — Canyon Media and Fox Sports are bringing local sports to the Southern Utah airwaves with “From The Bleachers,” a new daily sports talk show.

Radio personalities Mark Musgrave, aka The Voice You Know, and Kaden Foremaster talk local, national and world sports news Monday through Friday, 4-6 p.m. on Fox Sports, 99.5 FM in St. George and 93.1 FM/1400 AM in Cedar City.

The name of the show indicates the kind of attitude the hosts hope to display.

“We’re just sports fans talking with other sports fans,” said Foremaster. “We want fans of our teams to call in and chat with us. That’s really what it is, just chatting about sports with our friends and with our community.”

Musgrave said he hopes the show covers aspects of the sports world that are of interest to local fans.

Foremaster said that the radio show evolved from a podcast version.

“The podcast originally started out as ‘St. George News Sports,’ hosted by Mark Musgrave and a few other people as time went on,” Foremaster said. “So we transitioned that into ‘From The Bleachers’ once Fox Sports became a realistic thing happening on the radio side of things.” 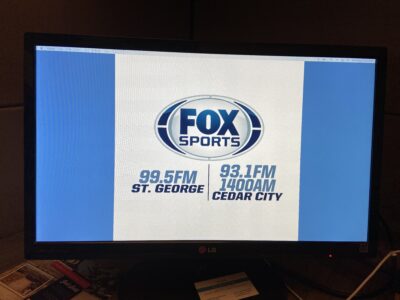 The show can be listened to in podcast form and is available to listeners from whatever platform they use for podcasts, he said, adding that the podcasts will play reruns of the radio show.

Both hosts have extensive histories and personal interests in sports.

“I ran cross country and played a little bit of basketball and ran track in high school,” Foremaster said. “I’ve always been a fan of all sports, and I’m a huge basketball fan – that’s kind of my forte when it comes to sports knowledge.”

Musgrave has been a part of the local sports scene in St. George for years.

“I’ve been coaching baseball and youth football for the past 10-plus years,” he said. “I think this is the seventh year I’m going into as public announcer for Desert Hills High School.”

Being a part of that scene provides Musgrave first-hand knowledge about local high school football, basketball, baseball and volleyball.

The hosts plan to include discussion of all sports that are in the area, not just high schools. College sports, with Dixie State and Southern Utah University, and pro sports, with the Utah Jazz, the Las Vegas Raiders and the Las Vegas Golden Knights, will also be emphasized.

Musgrave added that there are plans in the works to do interviews with sports beat writers from various sources, including a weekly interview with St. George News sports reporters.

All in all, Foremaster said, it’s going to focus on the community.

‘Just as beautiful and worth visiting’ as Zion: Local groups plan to improve regional trail system

Mother of 4 spearheading launch of diaper bank in Southern Utah