Deklyn Murphy was surprised by her parents when they took her to a city council meeting to be recognized by the Mayor and other city officials, St. George, Utah, June 3, 2021 | Photo courtesy of the Utah League of Cities and Towns, St. George News

ST. GEORGE — In addition to enjoying their summer vacations, several area students are finding opportunities to flex their writing skills and win some cash along the way.

Walker competed in the Les Taylor Memorial Golf Tournament and later decided to enter the tournament’s essay contest. He took home the first-place prize and $100 for his essay on honesty and integrity.

Murphy’s essay was compared against her fourth grade peers in an annual contest hosted by the Utah League of Cities and Towns. She ended up placing second overall at her grade level, earning $750 for her school and $300 for herself.

At the June 22 golf tournament held for the Junior Golfer’s Association, the family of Dr. Lester Taylor organized the competition at Sunbrook Golf Course and hosted an essay contest in his memory.

Based on Taylor’s “7 rules of Golf and Life,” essayists were invited to share how they were leading by example in their lives and in golf competitions.

Walker said he decided to submit an essay in a spur-of-the-moment decision.

“I didn’t really know about the contest until I got there,” he said. “After we finished (golfing), they said, ‘There are a bunch of extra contests you can enter.’ I decided the essay contest sounded fun, so I decided to do that.”

In his essay, Walker shared two experiences he had on the golf course where his honesty was tested. Exercising integrity, especially in scorekeeping, sets an example to teammates and competitors, he wrote.

“Doug Roberts and Reed McArthur are the ones that started me in golf, and they taught me the core values,” Walker told the St. George News. “No matter what, don’t give up and always tell the truth.”

The success that Walker had in the essay contest was a pleasant surprise to his family. Though they’re all avid golfers, Josh Walker’s father Jason Walker said that he’s seen his son’s talent for writing grow, especially since they moved to Utah about two years ago.

“I think writing sort of runs in the family, but it’s not something that he’s picked up on naturally,” Jason Walker said. “He’s worked hard at it in school since that’s been more emphasized in Utah. I think the school system in Utah has really turned that around for him.”

What didn’t shock Jason Walker was his son’s commitment to honesty.

“He’s the kind of kid that wants things to be fair and right, and he’ll fight for that, too,”  he said. “That drives him. He wants everyone to play by the same rules.”

Second place and $50 went to Jachson Lambert. The winning essays are posted on the tournament website along with Taylor’s “7-Rules for Golf and Life.” Taylor loved the game of golf and had 7 holes-in-one.

The Utah League of Cities and Towns gathered entries from fourth and seventh graders around the state for its 2021 essay contest. Students were invited to write about unique elements of their hometown, including events, history, people and beautiful sites.

In the fourth grade competition, Murphy’s submission rose to the top. Writing about her love for the parks and trails in St. George, she recalled fond memories with family and friends that cemented her love for her community.

She was invited to participate in the annual competition by her teacher, Jenny Drummond. Drummond has been encouraging her students to enter the essay contest for the last six years, and she personally invited Deklyn Murphy to participate after noticing her ability and her work ethic.

“We had another essay contest that we entered, and the one we had before this helped to prime her,” Drummond said. “When I talked to Deklyn about this one I told her it was not an assignment and I just wanted her to have fun with it. She is a perfectionist, but I think she had more fun with this writing.”

A panel of judges evaluated the submissions, ranking the essays based on creative thinking, correct grammar, spelling, structure and essay development. The three top-ranking essays in each grade receive awards.

For each of the top three entries, cash awards were given to the students and their respective schools totaling more than $3,000. Deklyn Murphy’s award earned her school $750. Her mother, Emily Murphy, is in her third year as PTO president at Diamond Valley Elementary and said the money will be put to good use.

“The school can do what they want with it, but chances are the fourth grade will have a pretty good say in how it’s spent,” Emily Murphy said. “People don’t realize how much money it takes to do things, even little things. That $750 would pay for the entire spring fundraiser.”

Murphy’s second-place finish was recognized at the June 3 meeting of the St. George City Council. In order to surprise Deklyn, Emily Murphy told the young girl that they were considering closing Diamond Valley Elementary and they needed people to speak out against it.

Even under false pretenses, Deklyn Murphy was glad to go and voice her support for her school. Instead, she was presented with an award by Mayor Michele Randall and cheered by attendees and city officials along with her principal, teacher and family.

Deklyn Murphy hopes to follow in the footsteps of her father, Brandon Murphy, by continuing to use her writing skills. She said she has a particular affection for fantasy stories and hopes to make her mark in that field someday.

“It’s something that I enjoy,” Deklyn Murphy said. “When I was younger, I wanted to be an author. I still want to if my current dream of being an illustrator doesn’t work out.”

The Utah League of Cities and Towns will officially honor the award-winning students at its annual conference this fall. 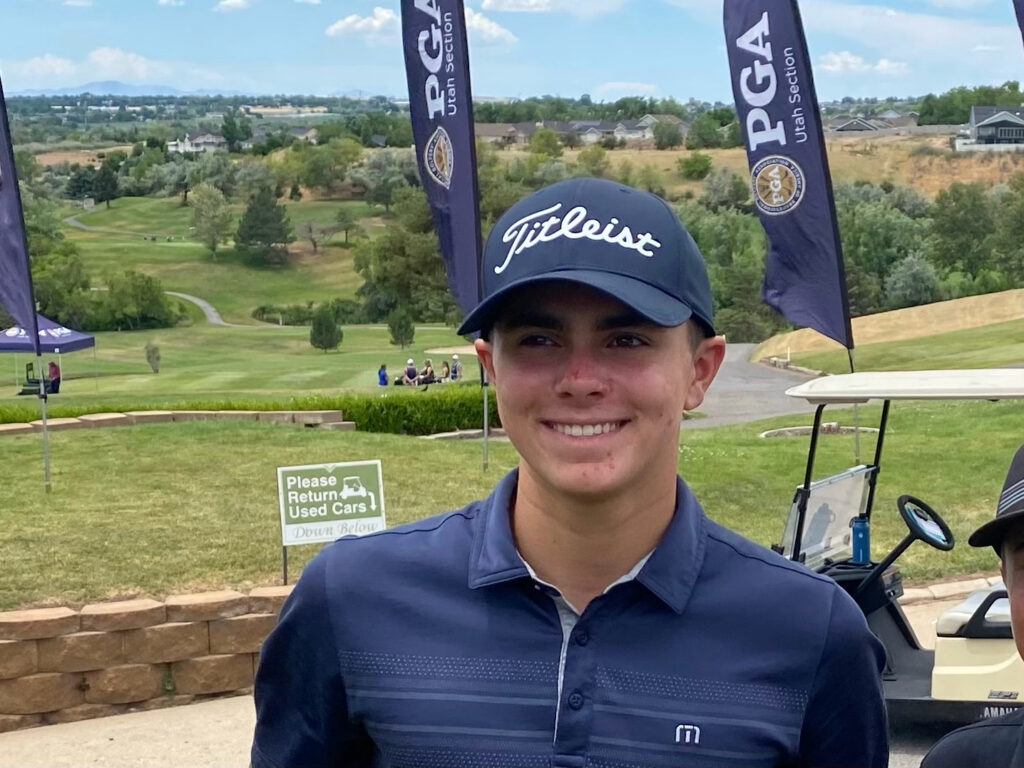 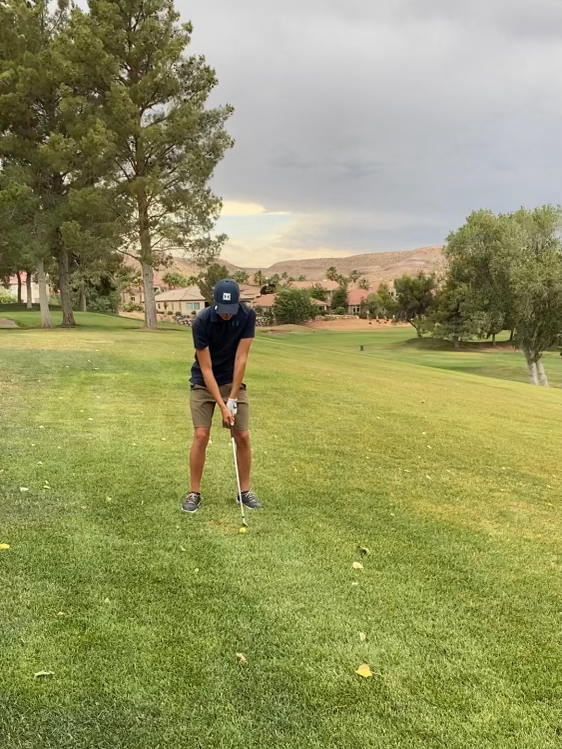 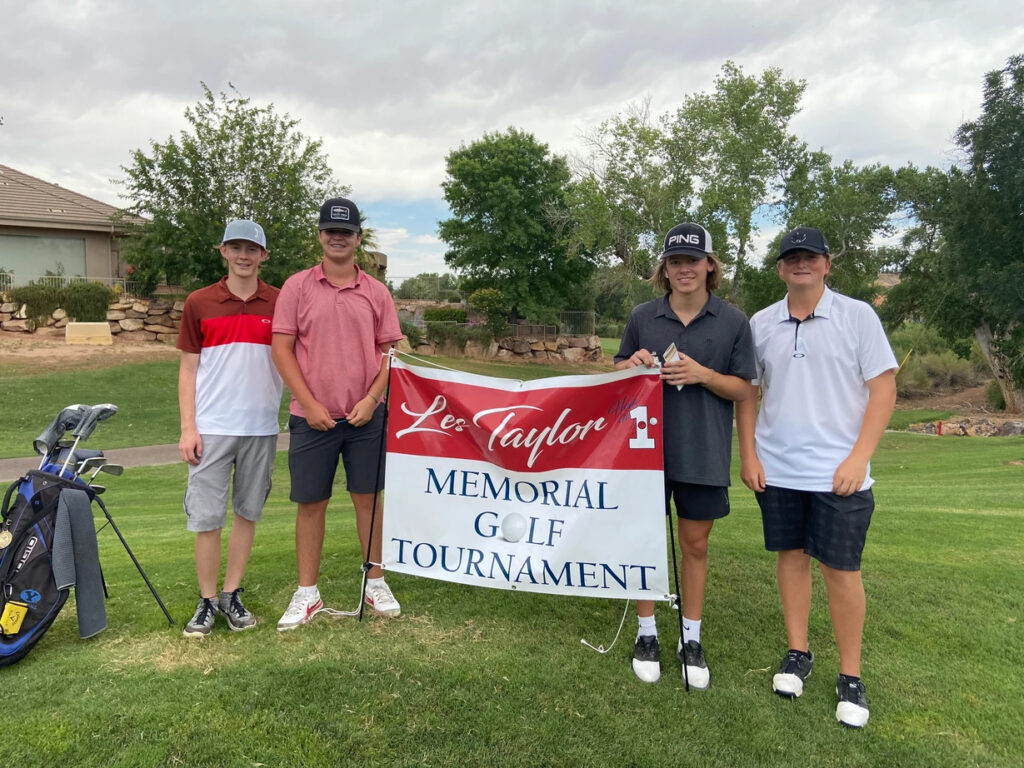 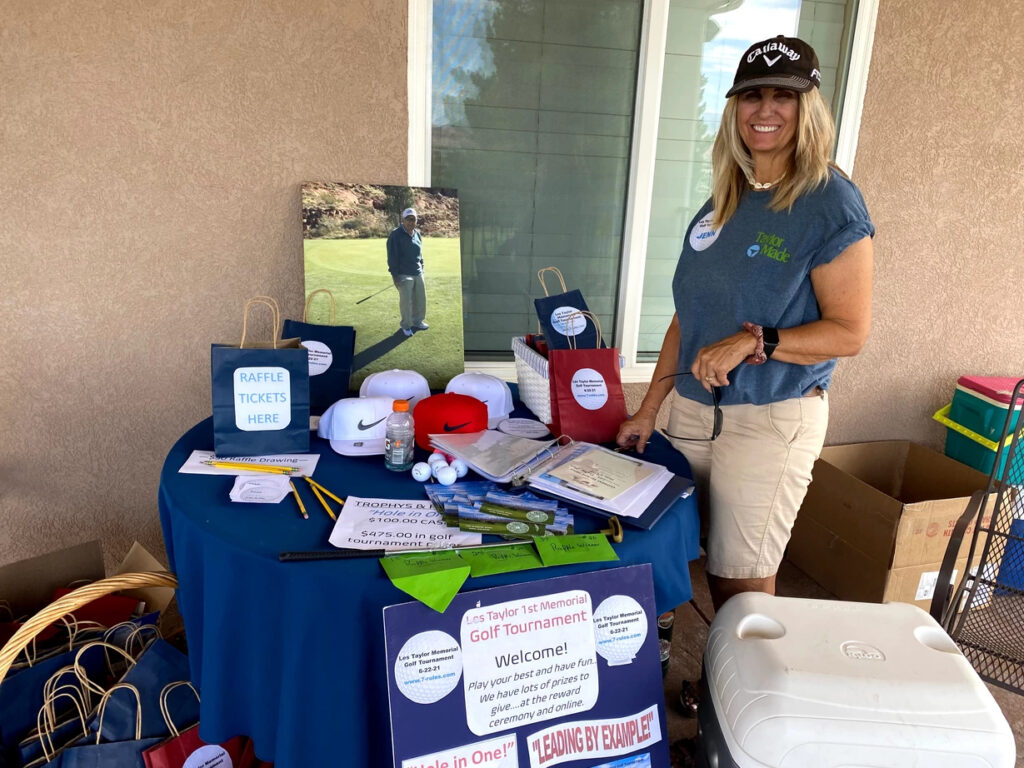 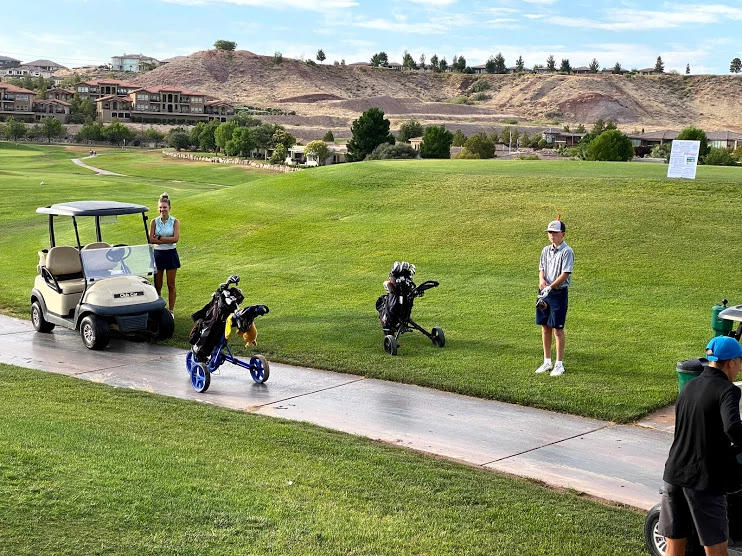 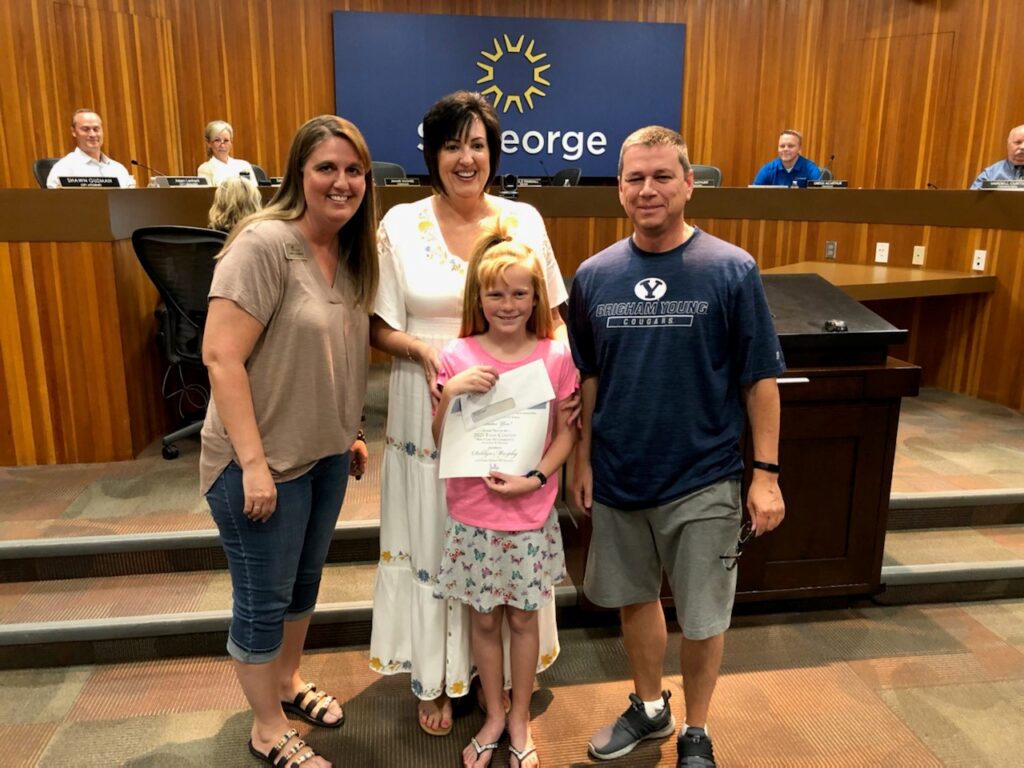 Deklyn Murphy was surprised by her parents when they took her to a city council meeting to be recognized by the Mayor and other city officials, St. George, Utah, June 3, 2021 | Photo courtesy of the Utah League of Cities and Towns, St. George News 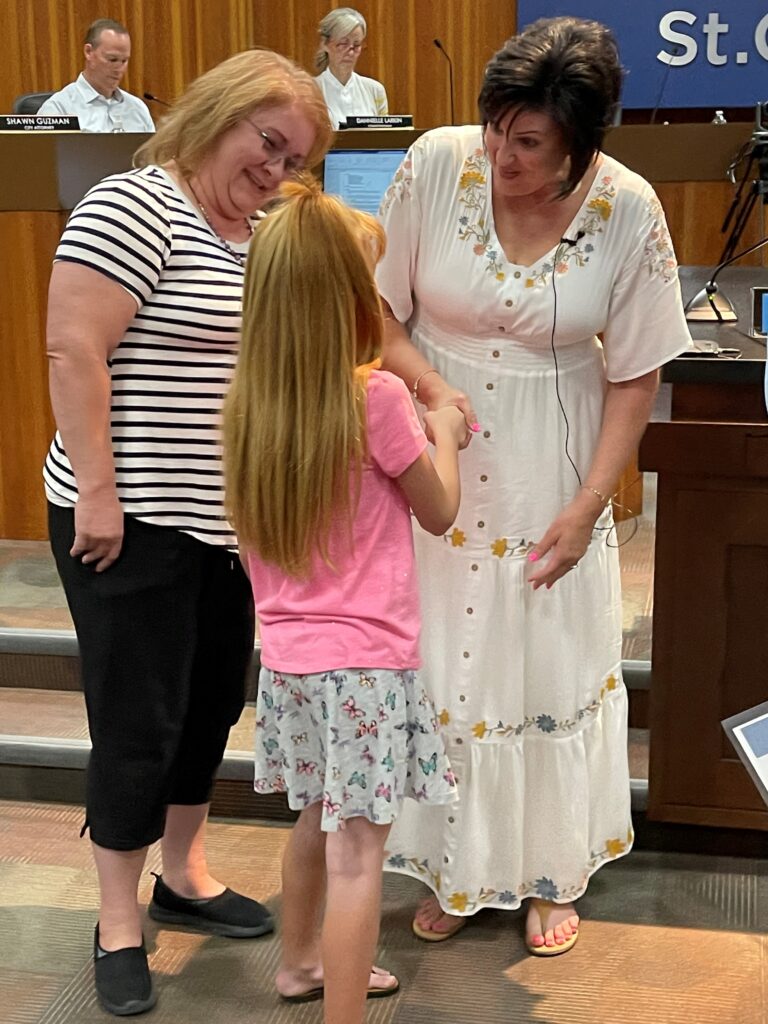 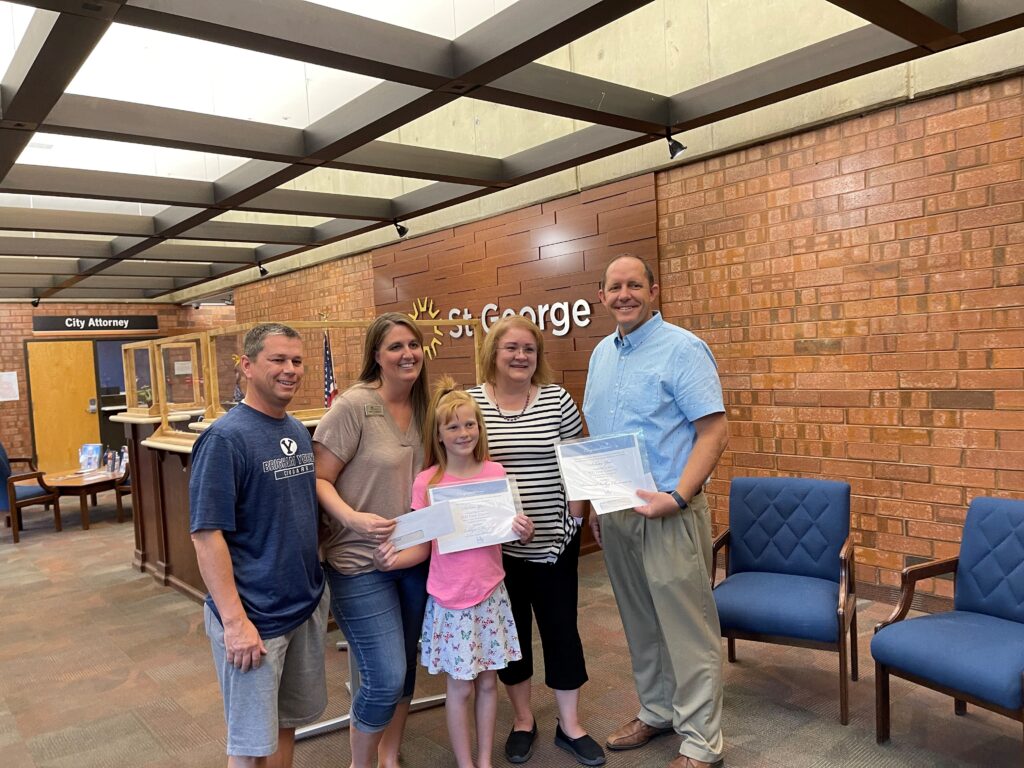