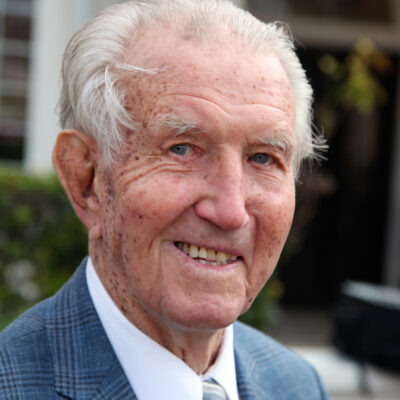 LeRoy Neilson Nisson, beloved husband, father, grandfather, and great-grandfather passed away peacefully on June 29, 2021. He was born May 31, 1921, in Washington City, Utah, to Willard Orlando Nisson and Annie Marie Neilson. He had one brother, Antone, and two sisters, Nina and Phyllis, who have preceded him in his next great adventure.

Roy was raised in Washington City and helped his family with the usual chores on the farm. His father, being a schoolteacher and moving around to different schools, frequently left Roy to help his mother at home. They didn’t have much money, but they didn’t seem to lack either.

He attended high school and college in St. George. During these years, he learned to play the trumpet and often played in the band at the dances. After graduating from Dixie College, he went to Los Angeles for work.

On Feb. 7, 1942, he married Janice Schmutz in the St. George Temple. Shortly after, they moved back to Los Angeles. In 1942, they moved to Provo where he finished his undergraduate degree at BYU. He then attended USC Dental School in Los Angeles. During these years they had two children, Christine and Martha. After graduation he set up his first practice in Downey, California. Several years later he joined the Air Force and was assigned to Edward Air Force Base for four years. Their third daughter Sheryll was born there.

After his four years in the service, they returned to Southern California and he took over a dental practice from a well-known dentist in Sherman Oaks, California. The practice eventually included many movie stars from the Golden Age of Hollywood like: Ginger Rogers, Clark Gable, Olivia de Havilland and Marilyn Monroe, among others. Their last two children: James and Robert were born in Granada Hills, California, where the Nisson family lived at the time.

About 1967 he was accepted into a preceptorship in Orthodontics, which he had always wanted to practice. When he finished, he stayed in that practice in Temple City and opened another in La Canada, California, where he practiced until his retirement in 1989. Shortly after retiring, he and Janice moved back to St. George.

Dad loved his horses from Rosie, his first horse, as a young boy, to owning a horse ranch in the Washington Fields. He liked to ride and took many of his children and grandchildren with him. Over the years, he and Janice made many trips abroad and traveled the United States in their R.V. They loved boating and vacationed frequently with family and friends at Lake Powell, from the year it opened. All of his children, grandchildren and great-grandchildren will be forever grateful for these trips and memories.

He was active in The Church of Jesus Christ of Latter-day Saints and served in many callings. He served as Bishop of his Ward and was very active with the youth. He donated his time and contributions to the communities he lived in. He and Janice were very loving and generous and opened their home to at least 22 young men and women who needed a place to stay for various reasons. This kind, hardworking, caring and generous man will be missed by all.

LeRoy is survived by his four children: Christine (Kirk) Kennedy, Martha (Paul) Colarusso, Sheri (Rick) Neilson and Robert (Virginia) Nisson. He is preceded in death by his wife, Janice Schmutz, his son, James Nisson and his siblings.

The family wishes to thank Natalie Irvine and Katie Lee for their excellent home care and service these past few years and also Intermountain Hospice for their help in the last few days.

Arrangements entrusted to the care of Metcalf Mortuary, 435-673-4221. For condolences, obituary and funeral listing, please visit our website at www.metcalfmortuary.com.