ST. GEORGE — If you asked 100 different people across the United States what they would do if they were in charge of the country’s public lands, you might get 100 different answers. Personal priorities, professional background and many more factors might influence the decisions one would make if given that responsibility.

In reality, there are millions of decision-makers that weigh in on the myriad issues related to public lands, many of which are individuals from public agencies such as the Bureau of Land Management, U.S. Forest Service or National Park Service.

What might surprise you is how much of the planning and design for these public agencies is undertaken by a handful of individuals.

“I do hope there will be more of us one of these days,” Angus said. “It’s an honor to be in public service, and I’d say I’m lucky.”

Angus said she believes her work as a landscape architect matches perfectly with the mission of the BLM, and she hopes that by understanding the intent behind her work and that of her colleagues in the BLM and other organizations, members of the public will have a renewed commitment to protecting public lands and putting them to good use.

So, how did Angus end up working in Southern Utah, and what is it that she does, really?

Angus’ journey to the BLM

As a young woman moving out of her native Tennessee, Allysia Angus didn’t know what to expect when she moved west. In the summer of 1989 – working in the mountains of Colorado – she fell in love with public lands and decided to make her home in the Intermountain West.

Angus continued her education, ultimately receiving a master’s degree in landscape architecture through Utah State University. As a graduate student, she worked on a project investigating the potential for trust lands outside of Big Water, Utah.

“In doing that work, as students, we came down and got to know some of the people that lived in the Big Water area,” Angus said. “Sometime that weekend, I just blurted out, ‘Man, I’d really love to work down here for the (Grand Staircase-Escalante) monument.’”

In her own words, she said it was “freaky” how the universe seemed to grant her wish. After a short stint in the private sector, Angus decided to leave behind a well-paying job with benefits to take a position as an intern in the monument.

She worked for a couple years in the monument while slowly earning promotions and undertaking greater responsibilities until she was hired on full time as a landscape architect in the early 2000’s.

Now, more than 20 years later, Angus still works for the BLM out of Escalante, Utah. Much of her work has been devoted to Grand Staircase-Escalante National Monument and other public lands in Southern Utah, but with her unique skill set, she’s traveled to Alaska, Idaho, Oregon and more to lend her expertise and help plan for public lands.

The work of a landscape architect

While the education she received lends itself to many applications, her professional title can be confusing, Angus said. The term “landscape” might make others think of gardening or landscaping.

“It’s very common for a landscape architect to meet someone new and the first thing back to them is, ‘Oh, will you come help me with my yard?’” Angus said. “There are many people in the profession that do exactly that, but there are probably many more of us that don’t. Not to say that I couldn’t help someone with their yard, but I need someone to help me with my yard most days.”

Much like conventional architecture, landscape architecture involves site analysis, project design, collaboration with partners and the public, construction specification and oversight during construction.

The main difference is that landscape architects usually have greater experience and training in planning projects that are surrounded by or full of natural elements.

“Landscape architecture, in simplistic terms, is trying to meld human desires and needs with the natural environment,” Angus said.

For example, Angus has worked on a number of sites in the monument, including completed projects at Deer Creek Campground and Head of the Rocks Overlook, as well as an ongoing project at Calf Creek Recreation Area.

In 2015, Deer Creek received a number of improvements after a site analysis revealed some flaws. The nearby trailhead needed a significant overhaul, and the campground was reorganized and renovated for greater capacity and accessibility.

Regarding the entry to a nearby trail, Angus said, “They would go down-canyon from every entry point. We were limited on space, because the wilderness study area is right around the periphery, but we defined the parking with the fencing and we organized the entry to go down-canyon into one place to consolidate the footprint and the use.”

The project also involved installing new signs and improving the parking surface at the trailhead.

Earlier in her career – in 2012 – Angus replaced a small pull off along SR-12 with a large overlook site complete with updated signage, a well-marked parking area and a carefully planned natural setting.

At the Head of the Rocks Overlook, where there were once a couple signs and erosion channels several feet deep, there now sits a wide, leveled and paved walkway with a short wall that can serve as an impromptu bench. Visitors can sit and take in the scenery while absorbing the informative signs explaining the view and the nearby geography.

Angus said the work of a landscape architect often goes unnoticed when it’s done right, because it blends well with the natural environment and it puts people at ease. She said the mark of success in landscape architecture is the ability to plan well enough that the designs are useful and accomplish their intended purpose.

“A lot of time, people just plan to plan,” Angus said. “As a planner, I always appreciate it when a high-level guiding document is actually implemented. I’m really proud of this project (the overlook). I think it’s functional. I get a big kick every time I drive by and there’s a ton of people using it, taking their pictures and reading the panels.”

Calf Creek Recreation Area is still in the planning and public comment phase for a number of proposed improvements. Led by Angus and Public Affairs Specialist David Hercher of the Paria River District, the BLM has provided a new way for the public to interact with development plans via an ArcGIS Storymap (organized by Angus).

Proposed improvements to features such as parking, the river play area, camp sites, the bridges and more would improve safety, increase accessibility and hopefully ensure longevity for the site’s infrastructure.

A history of success (with the land and the people)

Utah, and Southern Utah in particular, is no stranger to the controversy surrounding management of public lands. The debate is often framed as a conflict between conservation and use, tourist and resident or even citizens and government.

For Angus, addressing the public and resolving concerns has sharpened her skills with communication. She has often found herself presenting material to local residents, visitors and even her superiors in the BLM and other high-level government officials.

“First thing you do is listen,” Angus said. “You try to understand. I would say it’s not that uncommon that our visitors and the local public actually share a lot of the same concerns. You have to acknowledge that making everyone ‘happy’ is impossible. We have to make decisions that are solid for the location and for the variety of people and critters that depend on it.”

While she doesn’t claim to have a perfect track record, there are a few notable achievements that Angus can claim some credit for.

Her guiding philosophies and architectural impressions have spread throughout the United States through her involvement in drafting the BLM’s Guidelines for Quality Built Environment. The document outlines best practices for planning and designing BLM facilities wherever the agency operates.

Closest to home, Angus helped to to prepare application materials and develop a management plan for Scenic Byway 12 from Panguitch to Torrey to receive recognition as an All-American Road.

Through it all, she has made her home in a small Southern Utah town surrounded by vast swaths of public lands. When asked about her favorite place in the monument, Angus said:

The rims above the Escalante River would be one response, but I also have an incredible affection for the straight cliffs. They’re not as bold in their beauty, but I would say about this landscape as a whole, it’s one that you can appreciate and love driving through it and seeing it on a grand scale, but getting into it and seeing the intricacies up close: nothing beats that for forming attachment.

In addition, Angus said there’s a place of particular importance near her home. It’s totally in view of Scenic Byway 12, off the beaten path but not untrodden. She joked that when she dies, she hopes her friends would take her body there and lay it to rest.

A place like the one described by Angus perhaps perfectly encapsulates her life’s work: an area of immense beauty that’s not so much a closely guarded secret as a little-known treasure. She has invited friends and strangers to absorb the beauty of her beloved corner of the world, and she’s championed the pathways, physical and otherwise, that allow groups inside and outside the public lands to communicate and cooperate.

Most of all, Angus has made plans for the future: her own and that of the lands she manages. 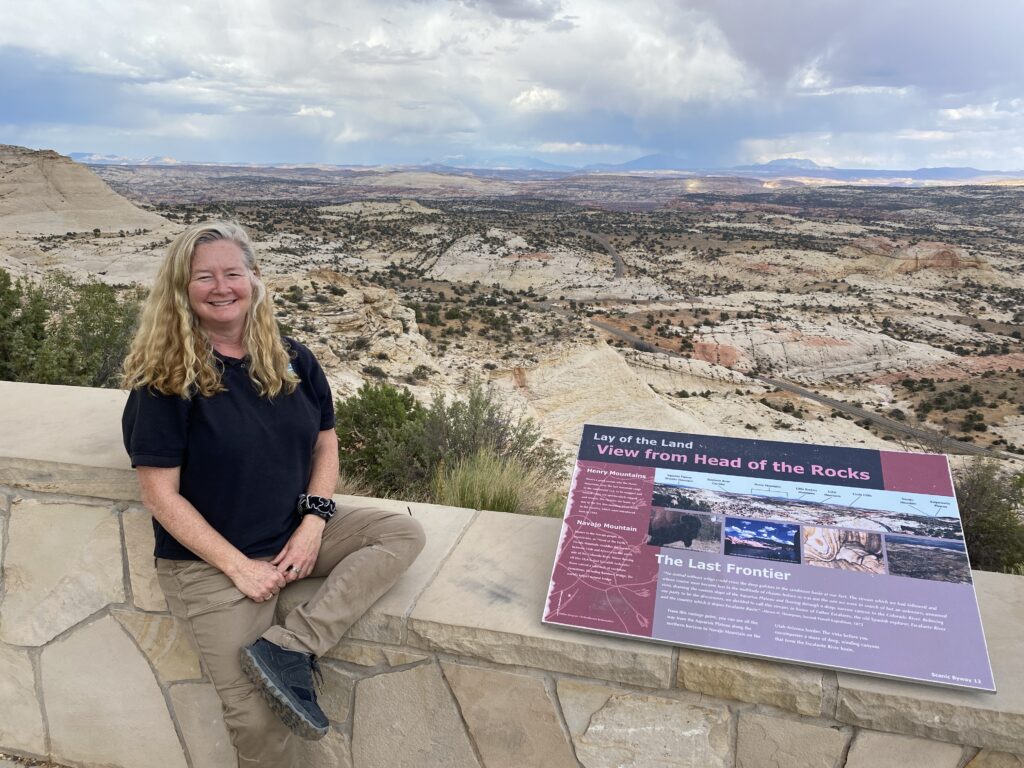 Allysia Angus poses at the Head of the Rocks Overlook she helped to redesign and expand, Escalante, Utah, June 24, 2021 | Photo by Ammon Teare, St. George News 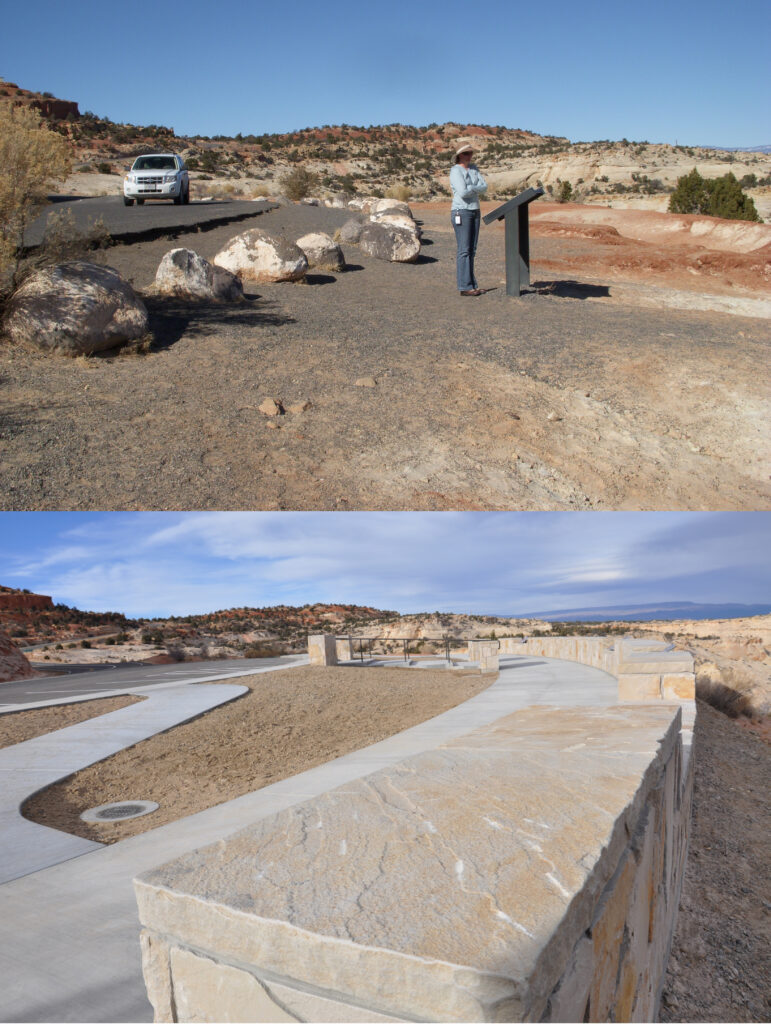 A composite image showing before and after views of the improvements made at Head of the Rocks Overlook, Escalante, Utah, photos undated | Photos courtesy of the BLM-Paria River District, St. George News 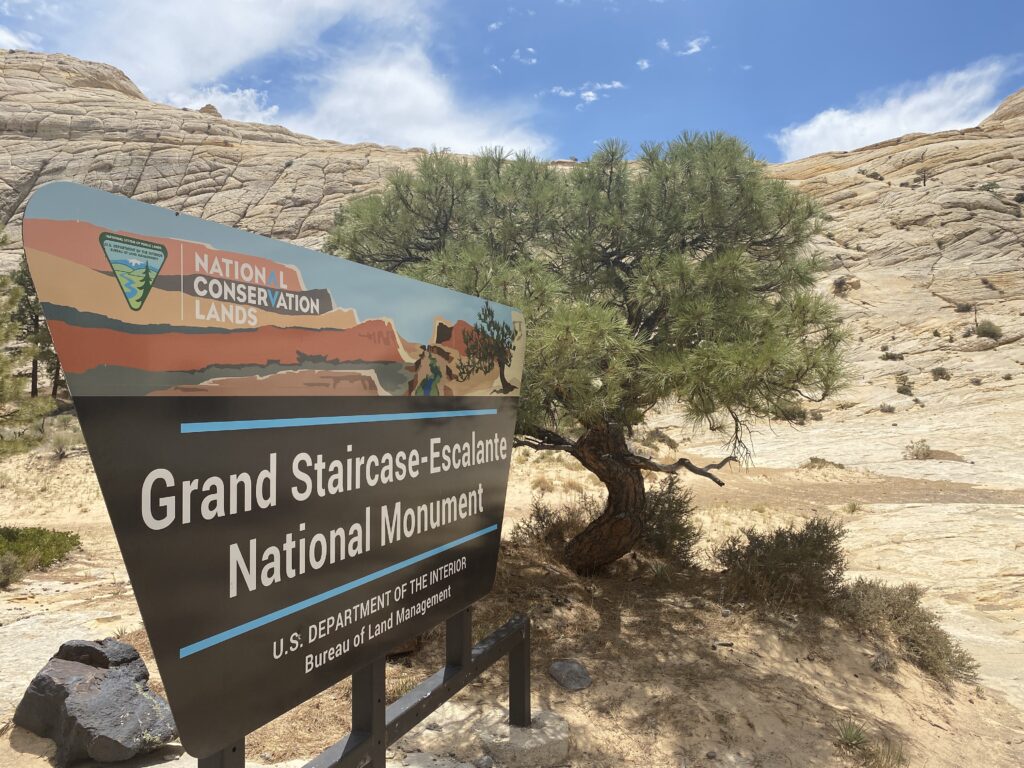 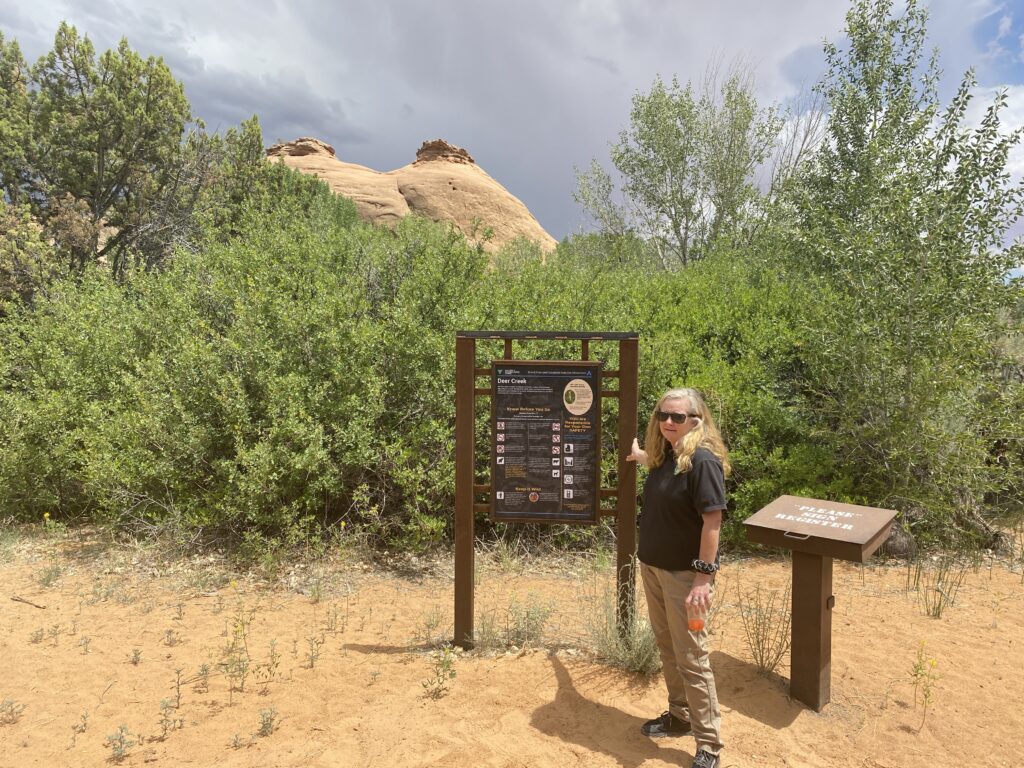 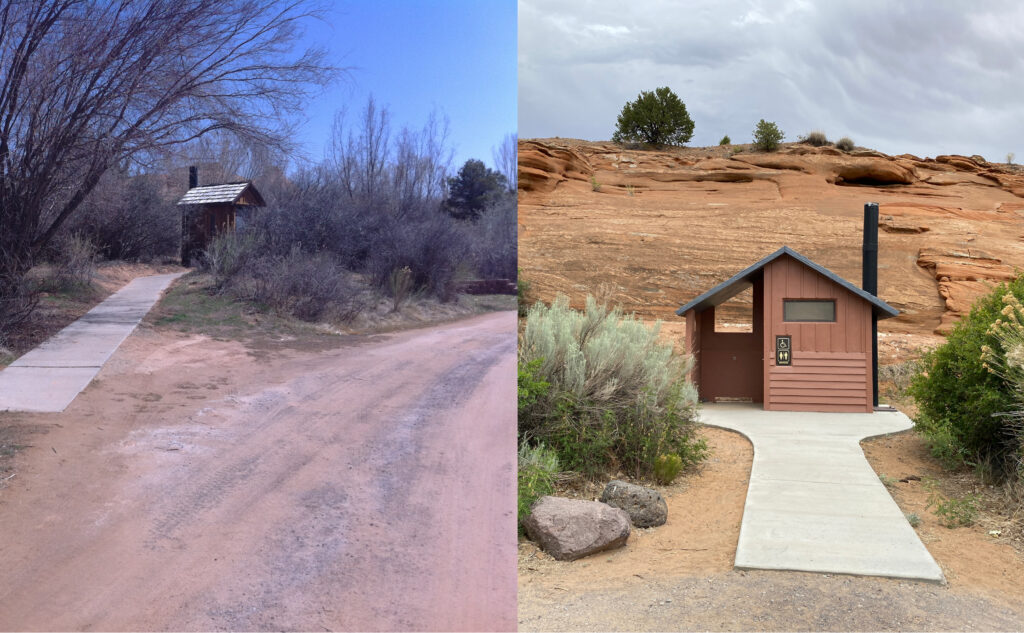 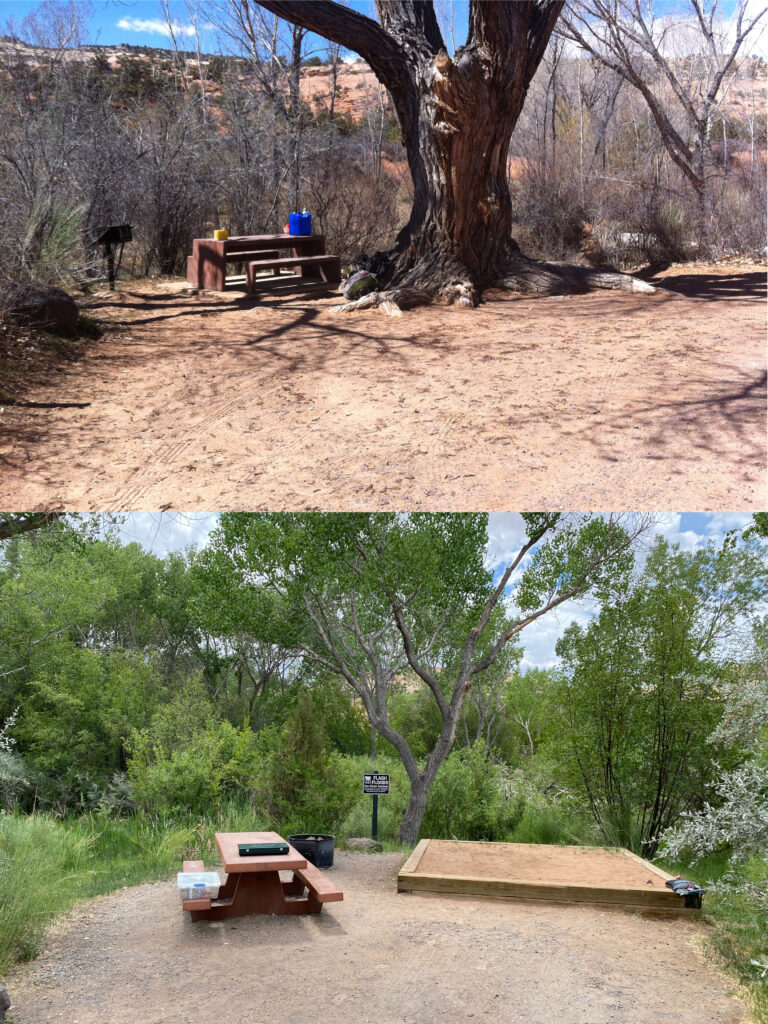 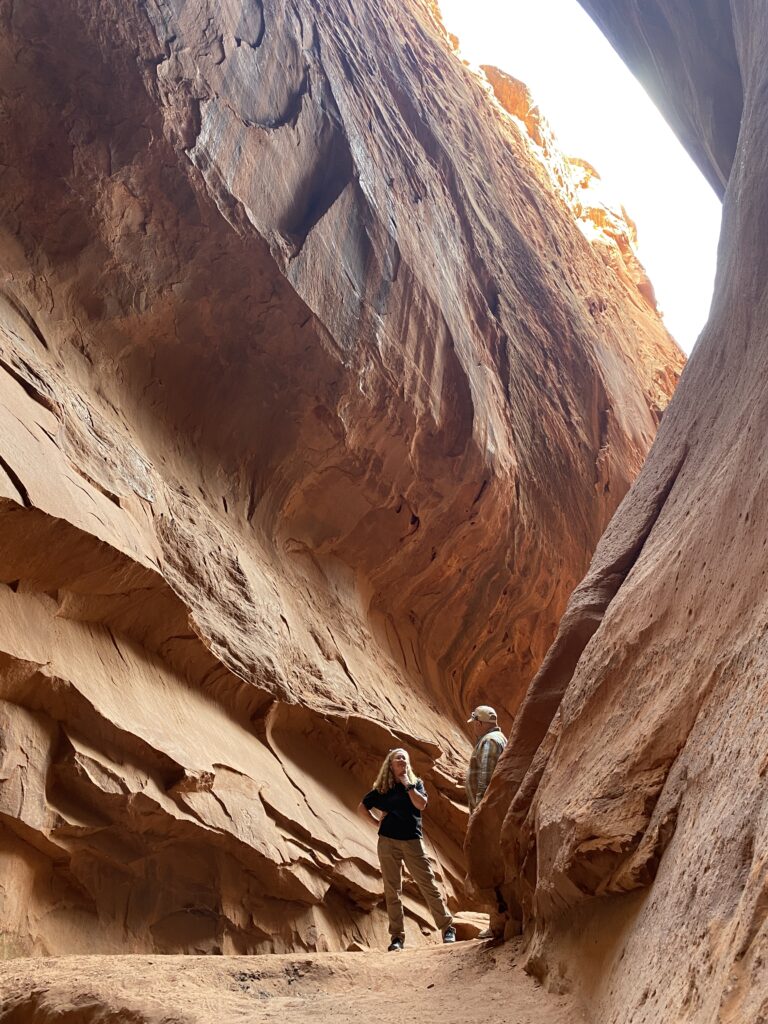 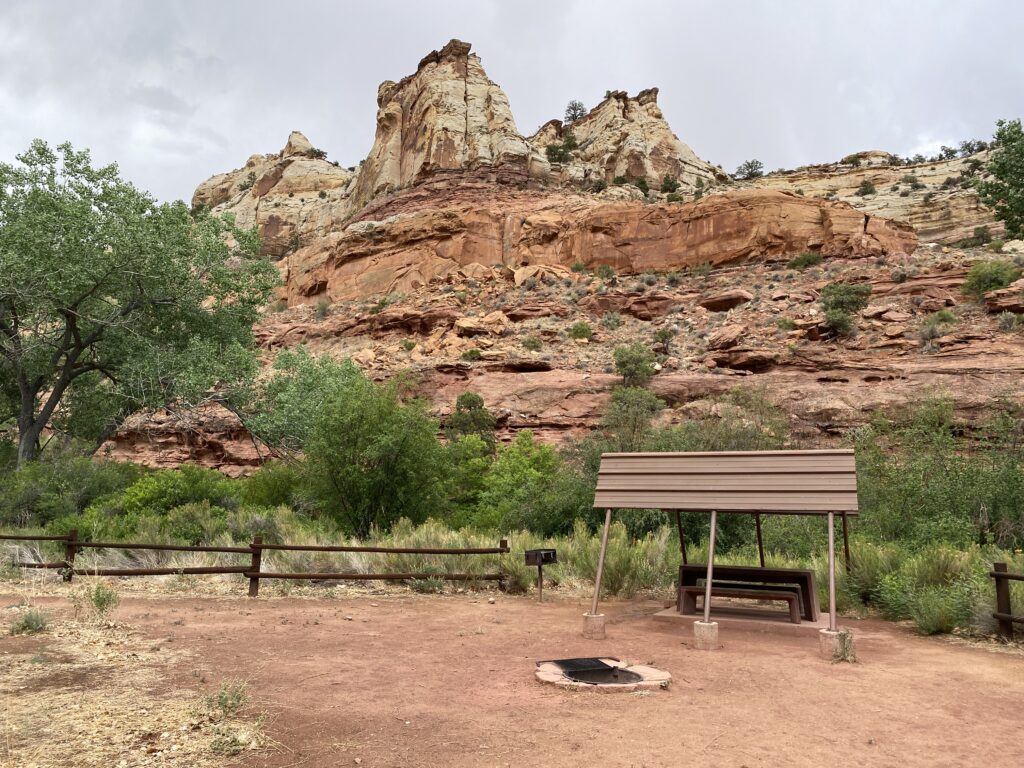 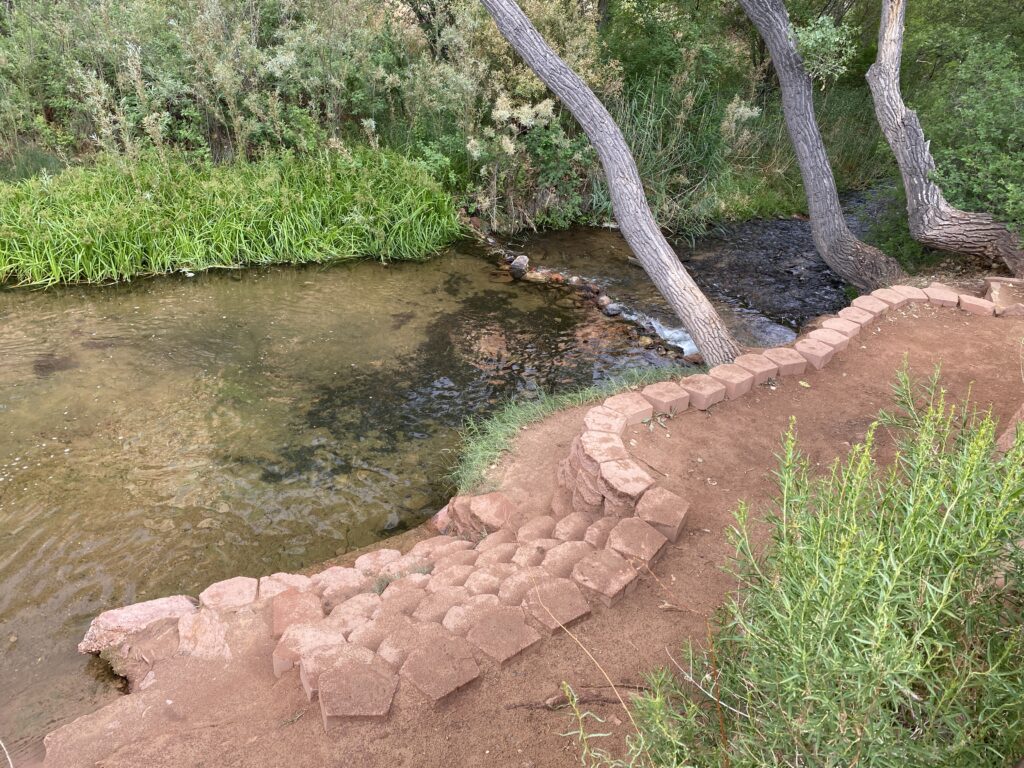 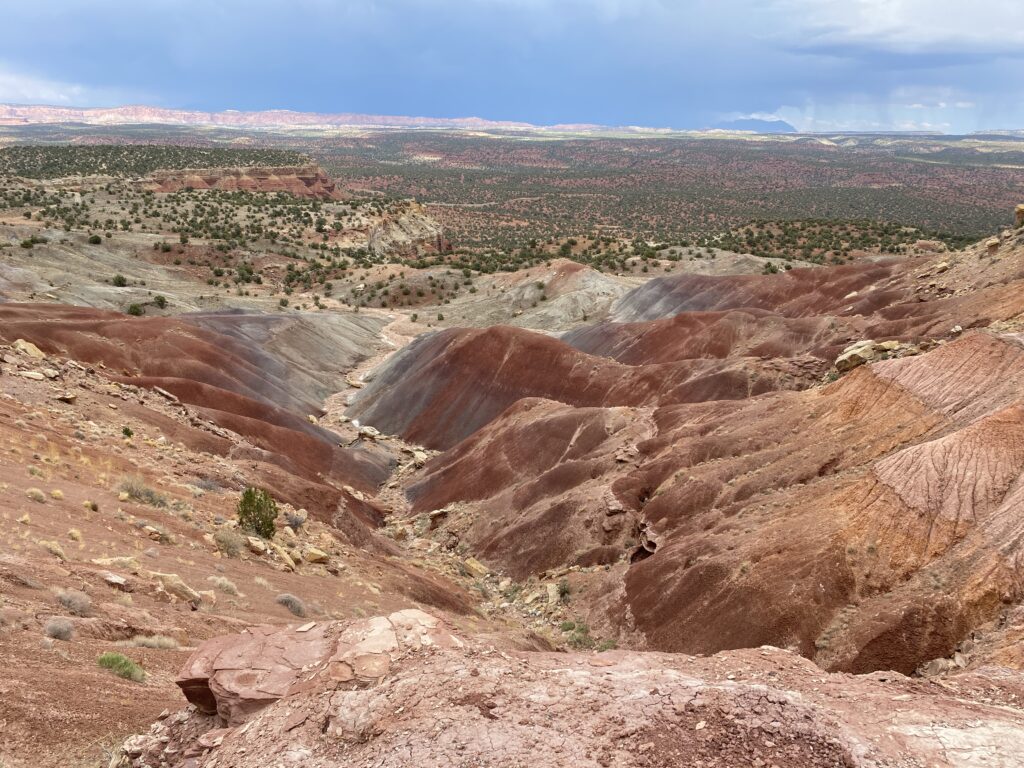