ST. GEORGE — This year’s 99.9 KONY Country’s 4th of July Celebration went off with a bang as thousands of residents and fans packed into the Greater Zion Stadium. The Saturday evening festivities were headlined by country star Russell Dickerson and culminated in a huge fireworks display.

Sponsored by Canyon Media, 99.9 KONY Country, Dixie State University, St. George Regional Hospital and the city of St. George, the concert and fireworks show were held to celebrate Independence Day and to honor the men and women who have fought for freedom and liberty.

“We feel like this annual 4th of July event is an opportunity to bring everyone together, recognize this great country and celebrate our freedom regardless of differences,” said Ben Lindquist, Canyon Media general manager. “We invest a great deal of time, money and resources and with the help of incredible staff, key partners and sponsors, we feel like this was our best event to date.”

The event’s emcees were Amy Chesley and Marty Lane, morning hosts for the KONY Country radio station. Lane told St. George News that it was his co-host’s idea to book Dickerson and said he was glad she suggested him.

“It was an absolutely amazing performance by Russell Dickerson,” he said. “I’ve been to a lot of concerts in my career and that was the best ever!”

Dickerson sang a number of his hit singles, and even performed an unreleased original, “Blame it on Being Young.”

Lane also thanked the sponsors and fans who braved sweltering heat as high as 108 degrees Fahrenheit to enjoy the event.

Despite limited capacity due to ongoing construction at Dixie State, over 10,000 people  gathered in the stadium for the 2021 celebration. Whether spread out on blankets on the field, standing at the foot of the concert stage or seated in the stands, attendees cheered and celebrated the annual holiday.

Along with Dickerson’s concert, audience members were treated to an opening performance by Utah-based country artist Skyler Geer. Geer performed some rock & roll and country music classics as well as a few originals.

An hour of pre-show activities were provided by United We Pledge, a non-profit foundation committed to preserving the values of faith, family and freedom. As part of the pre-show, the  well-known World War II humanitarian and pilot Gail Halvorsen was flown overhead in a helicopter and made yet another run as the “Candy Bomber.”

Halvorsen was presented with a lifetime achievement award through United We Pledge, and was given the award by a woman who had been a recipient of his charitable candy-dropping flights. She recounted her feelings as a 3-year-old in 1940s Berlin, and embraced Halvorsen after handing him his award.

In addition, the pre-show included remarks from Tim Ballard, head of Operation Underground Railroad, and the unfurling of “Big Betsy” – the world’s largest free-flying American flag – over the stadium’s stands.

The night’s festivities concluded with a fireworks show sponsored by the City of St. George. Technicians orchestrated a 20-plus minute display of lights and color in the sky above Dixie State campus.

“I have no doubt that next year will raise the bar even higher and be something for everyone to look forward to,” Lindquist said. “I want to say thank you to all of those that showed up or tuned in to the firework music on 99.9 KONY Country. Your support makes it all worth it.” 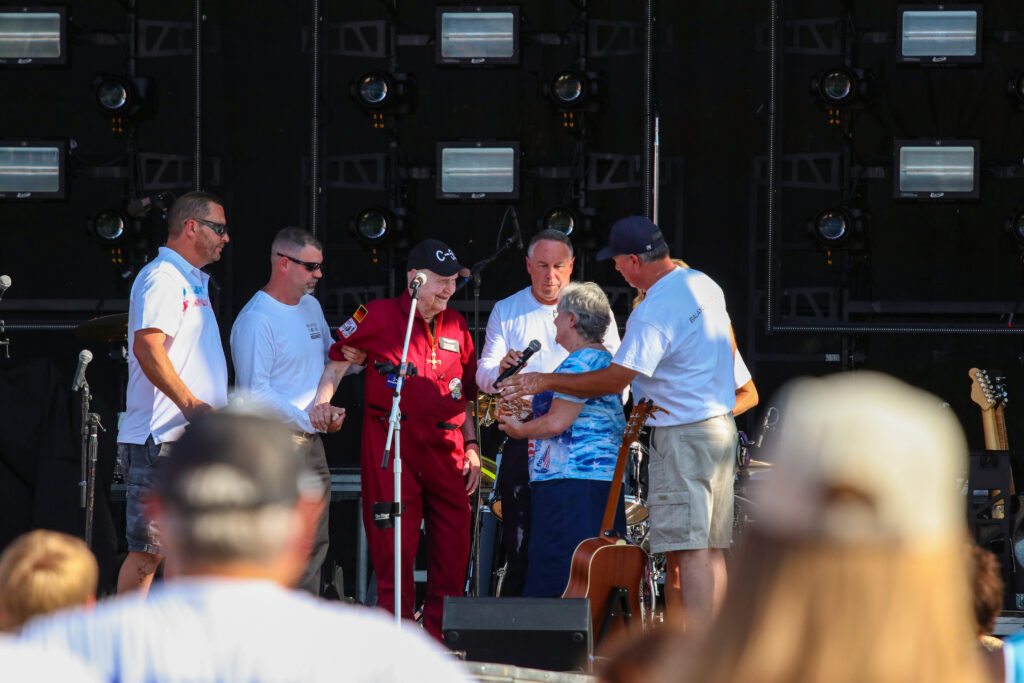 Gail Halvorsen (red jumpsuit) receives a lifetime achievement award from a woman who had been a recipient of his candy-dropping in 1940s Germany, St. George, Utah, July 3, 2021 | Photo by Ben West, St. George News 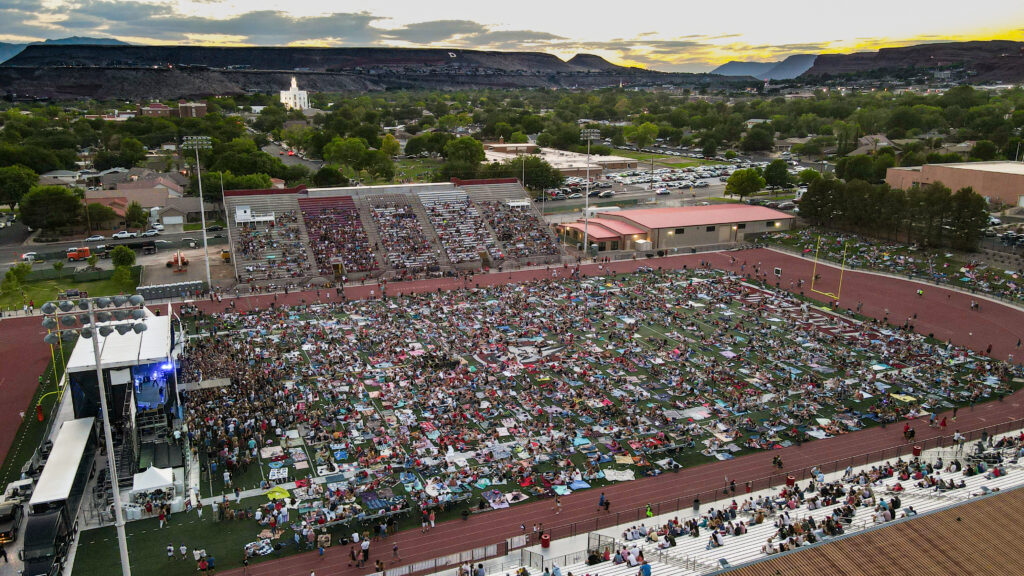 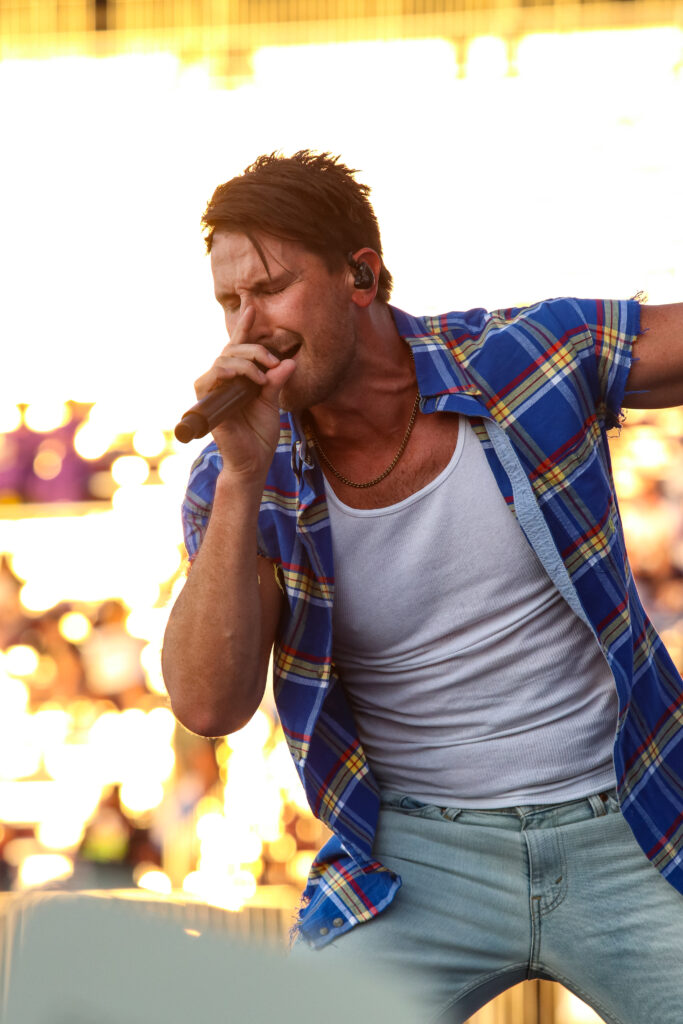 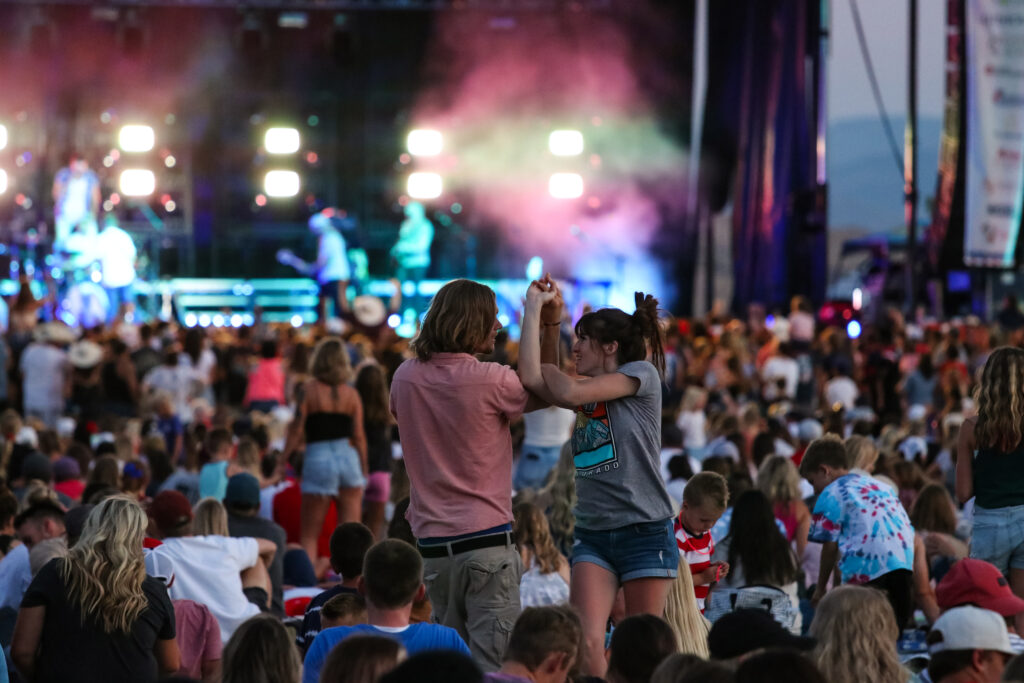 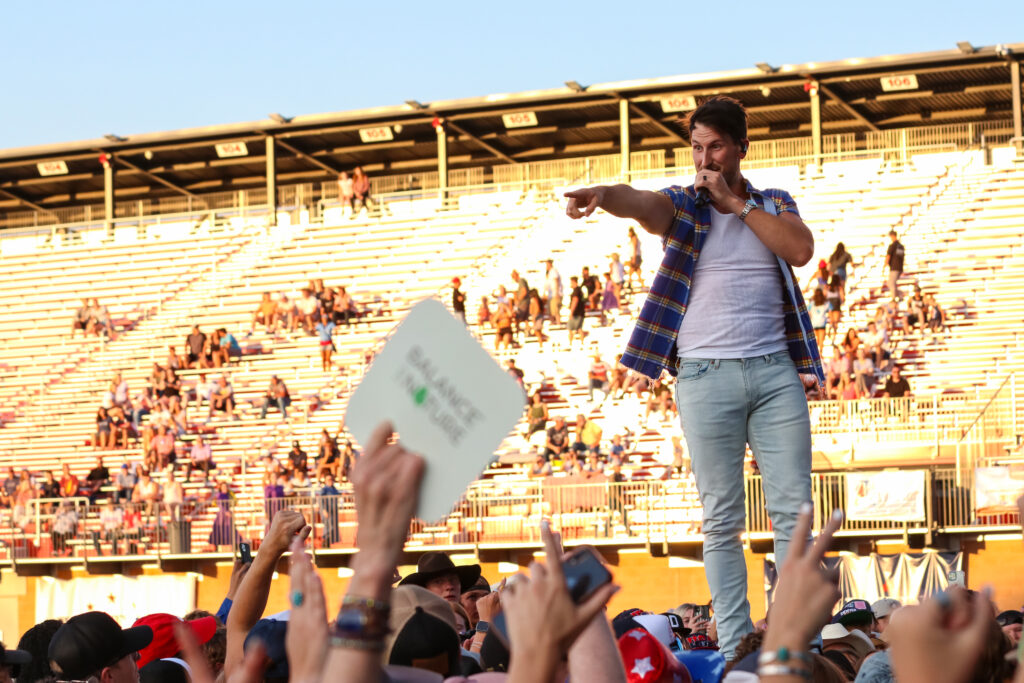 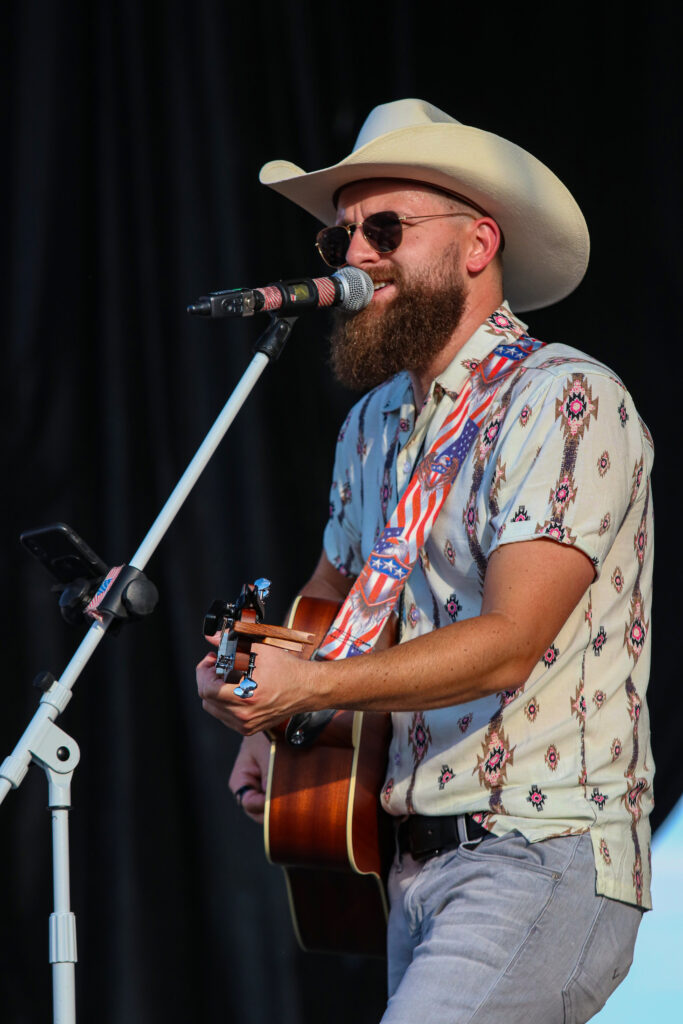 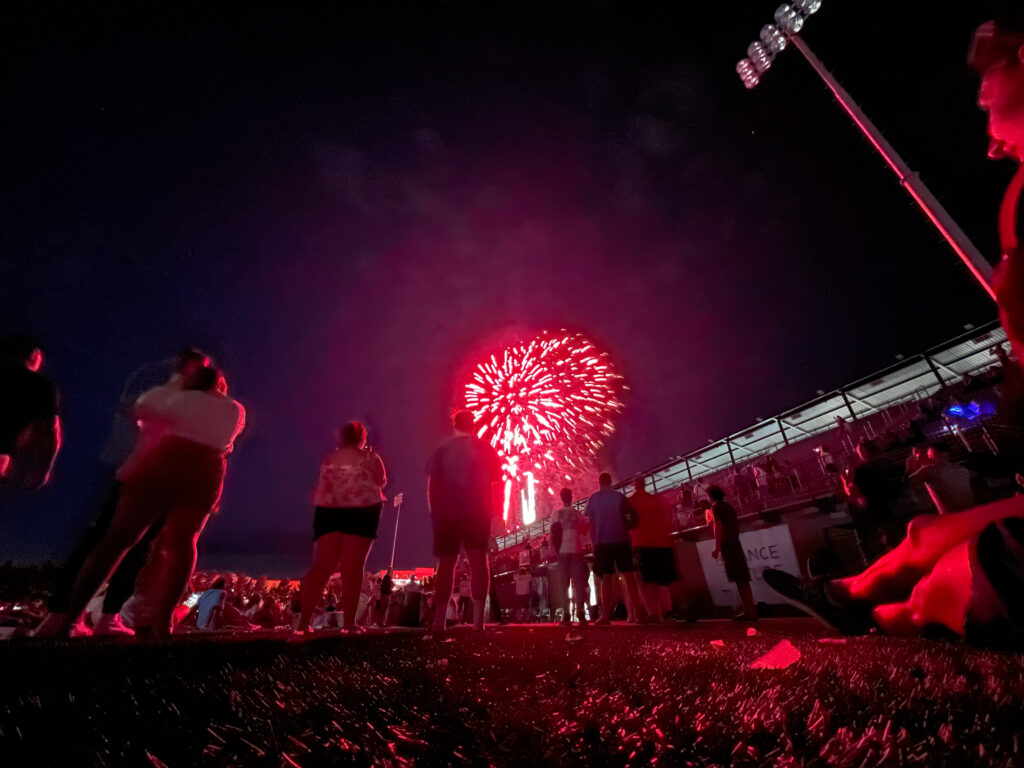 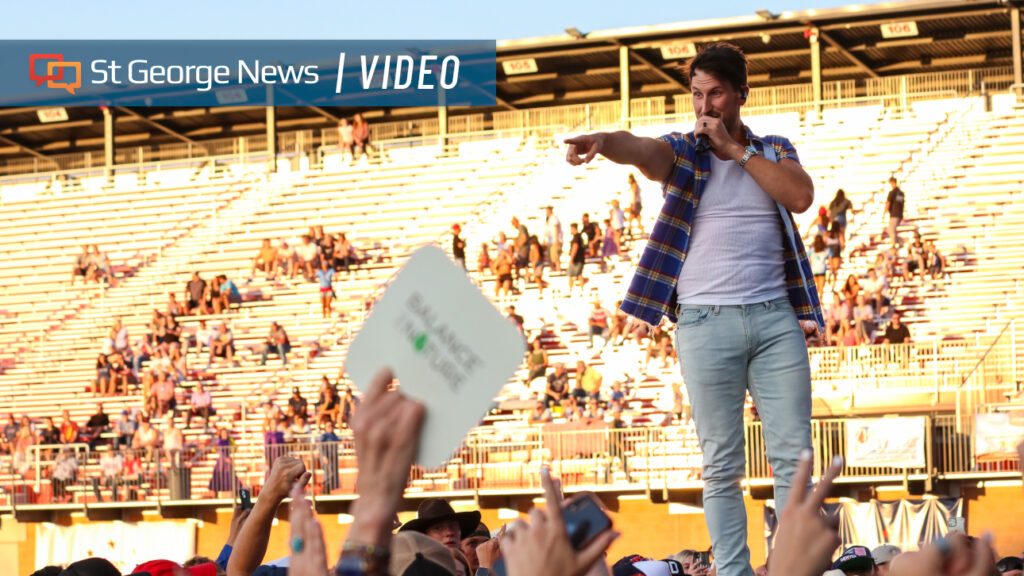