BEAVER — The dwindling supplies of water in the state became a topic this week for a government body that one may not think of when it comes to the drought: the Southwest Utah Public Health Board.

But members of the board and the director of the Southwest Public Health Department nevertheless expressed concern about the drought during their bi-monthly meeting at the department’s Beaver office. Namely, the safety of the remaining water supplies and the transport of that water from one water system to another – especially in Southern Utah’s more rural and agricultural areas.

“It’s a public health issue like everything else is,” the department’s director, Dr. David Blodgett, told St. George News. “It’s more about the safety (of the water), and we want to make sure that that water is treated appropriately.”

The issue at question was “water hauling,”  which involves collecting drinking water in a portable tank or vessel from an approved public water system and delivering it to another one. This can range from large city and county entities transporting a water supply to a farmer dredging up groundwater from wells and giving it to another.

While a decision on whether to issue new regulations or to more strongly enforce existing ones was tabled during the Wednesday meeting, it still dominated a large portion of the board’s meeting – almost as much as COVID-19, which was also discussed.

Board member Dr. Clayton Perry warned the board that residents on Cedar Mountain will “run out of water” this summer. Many, especially in such rural locations, will opt for transported water from other sources stored in mobile tanks. But health officials warn if safety measures aren’t properly taken, the transported water can provide sickness, rather than refreshment.

“Well, some people have old storage tanks. Many of them are above ground. If the sun is beating on it and there’s something growing inside, it’ll only grow more inside a contained unit like that,” Gil Almquist, a board member and Washington County commissioner told St. George News. “You don’t want a water supply that’s bad. Is it potable water and how are they taking care of the sewage?”

The Centers for Disease Control has guidance on water hauling, drawn from the World Health Organization, that includes disinfection techniques of the tanks as well as the materials the tanks are made of.

Wastewater septic systems are also a concern to the board, especially portable systems that potentially could spill toxic material into the groundwater.

“Our interest is to have a properly functioning septic system,” Blodgett said. “We have to ask ourselves do we want a community that has a bunch of porta-potties that are overflowing?”

At the same time, board members are debating being more stringent on safety against the rights of the property owners. Board member and Iron County Commissioner Paul Cozzens expressed concern about being overly restrictive, mentioning that the property owners can police themselves and make sure the water they’re transporting is healthy.

“At what point do we stop people from protecting themselves,” Cozzens said during the meeting, though he added if there is a rule in the books concerning water safety, it needs to be enforced. “When it comes to personal use, I hope we err on the side of property rights.”

Health board against mental health merger

While not a binding vote, the board made clear that it is against a request from Washington County Commissioner Victor Iverson to merge the public health board with the Southwest Behavioral Health Local Authority, which serves the same function for mental health.

While noting that, Iverson said the move makes sense as Washington County has the biggest bill as far as mental and physical health policies are concerned. Almquist still made it clear to the board that he was the messenger, but not necessarily in agreement. 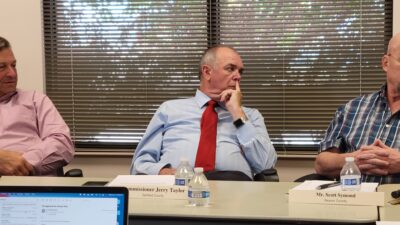 “Personally, I’m against the merger,” Almquist told the board. “I don’t see the point in doing it.”

The proposal drew alarm from the board’s chairman and Garfield County Commissioner Jerry Taylor, who said the proposal would leave out the more rural areas of Southern Utah.

“We’re a county of 5,000, and we can’t go out on our own,” Taylor told the board. “(Washington County) pays the biggest part of the bill but it also gets the most benefits.”

Blodgett decried the idea from a logistical standpoint.

“It would have taken the rest of my career to figure out how this was going to work,” Blodgett told the board.

After board member Dr. William Petty made a motion to “express we are really not interested,” Almquist noted, “This is just a discussion, but the message was received.”

Will you be prepared in the event of an emergency? Tips for physical, mental and financial preparedness

St. George churches answer the call to cut back on watering