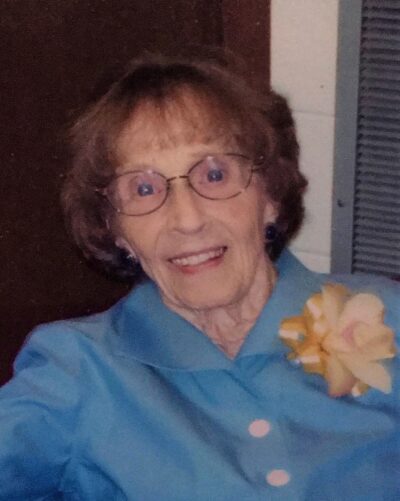 Well, she made it to 100! Margaret Jane Todd Benson graduated peacefully to more heavenly spheres on June 8, 2021, in Springdale, Utah. She was born Dec. 16, 1920, in Ogden, Utah, to Elizabeth Baker and Walter Henry Todd. Services will be simple and held in the Relief Society room of The LDS Church, 1584 Zion Park Blvd., Springdale, Utah, Saturday, June 12, at 11 a.m.

As a young girl, Margaret yearned to make music so asked her dad for a piano. Not being able to afford one, he swept out the store of the local piano seller for over a year in exchange for an old upright for his gifted ‘honey-girl.’ That piano is cherished by Margaret’s children as a reminder of their grandpa’s sacrifice and the music with which their mom filled their lives.

From age 12 to 92 she accompanied countless choirs, plays and soloists at church, school, home and community, bringing out the best in others as she offered her talent in the shadows so they could sing and shine.

Master of witty repartee, clever comebacks and tinkling those ivories, Margaret relished her time at Utah State University, majoring in business. Though she made good grades, she gave her most studious efforts to making memories, especially meeting and mesmerizing Theodore (Ted) Nelson Benson. They were sealed in the Logan Temple their senior year. Their love was deep and abiding and challenged. They are now relishing the wonderful and resolving the rest with all eternity before them and spiritual winds in their sails.

Because Ted was a career Army officer, Margaret moved every few years while raising three girls. It was rich and rewarding experiencing the goodness of Brazil, Virginia, California, Okinawa, and the many other places Army life introduced to her small family.

This really should be, in honor of a woman of such wit, verve and vivaciousness one of those clever and hilarious obituaries, but the only person I know who could help me create such a thing is, sadly, she for whom this obituary is being written.

Margaret and Ted ultimately retired to Springdale where they were blessed with a warm and remarkable, even saintly (yes, you are!), caring and compassionate community. After Ted died, Margaret enjoyed having her oldest daughter close by and her youngest live with her, both attending to her every need and whim.

This selfless sacrifice of their own ‘needs and whims,’ though they do not consider it such, are recorded in heavenly annals and in the hearts of all who know of their ceaseless service. Several caregivers aided Margaret’s daughters in what could have been overwhelming responsibilities. For their dedication, humor, patience, skill and love, deep gratitude goes to Kayla, Sheila, Nancy and Catherine.

Comforted with the knowledge that this separation is temporary, those who remain: her children, Kristen Benson, Elizabeth (Jim) Cutler and Carolinda Benson; grandchildren, Noel (Suzette) Benson, Emily Anne Cutler and Matthew Benson Todd Cutler; sister, Joyce (Louis) Notarianni, are standing on this side of the veil tearfully saying farewell while those who preceded her in death: her siblings, Frantzen (Gertrude) Todd, and Arlene (Ollie) Patterson; parents, Elizabeth and Walter Todd; and eternal companion, Ted, are joyously calling, “Here she comes!”

Arrangements are made under the direction of Spilsbury Mortuary, 110 S. Bluff Street, St. George, Utah, 435-673-2454. Friends and family are invited to sign Margaret’s online guest book at www.spilsburymortuary.com.