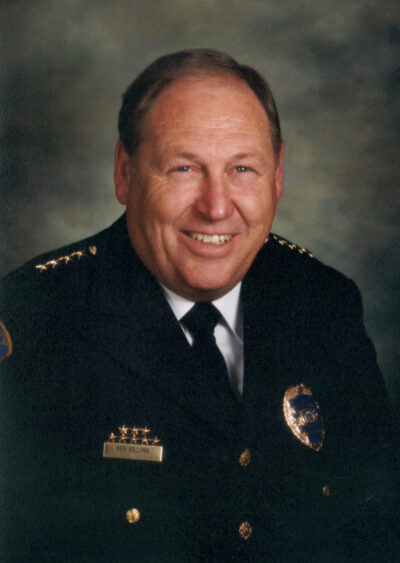 Ken graduated from Jordan High School in 1954. Shortly after graduating, he began his life of service, first serving in the Korean War from 1955–1957, in the Army Military Police Corps, and then upon his return from Korea, as a patrolman for the Murray City Police. His career with Murray City spanned 43 years. Ken married Rosalie Peterson on Sept. 4, 1959. A year later, Ken and Rosalie welcomed a baby boy, Kenneth Arnold. Sadly Rosalie passed away in 1964, and left Ken alone to take care of his young son.

It didn’t take long for Ken’s best friend Paul Forbes to set him up with his beautiful niece Judy, and as handsome as Ken was, Judy knew he was a catch, so three months later, on July 22, 1966, Ken married Judith Lee Fisher. With this marriage, Ken gained a daughter, Sheila. A few years later, the beautiful family of four then welcomed a baby girl, Michelle, to round out the family. Ken raised his family in Murray, all the while climbing up the ladder in the police department where he was eventually promoted to Chief of Murray City Police in June of 1988.

He served on many task force committees in Salt Lake County and the State of Utah. He was honored with being asked to carry the Olympic torch through Murray City in 2002. In 1998, his wife Judy passed away. This put a very handsome bachelor back on the market, and the beautiful Janet Gibb caught his eye. On April 27, 2001, they were married and enjoyed 20 years of travel and golf. With this marriage Ken gained two step children, Brenda and Jeff.

We would like to thank the staff at Season’s Health & Rehabilitation and Zion’s Way Hospice for their loving care of Ken.

Live streaming of the services can be viewed by clicking on the link below: