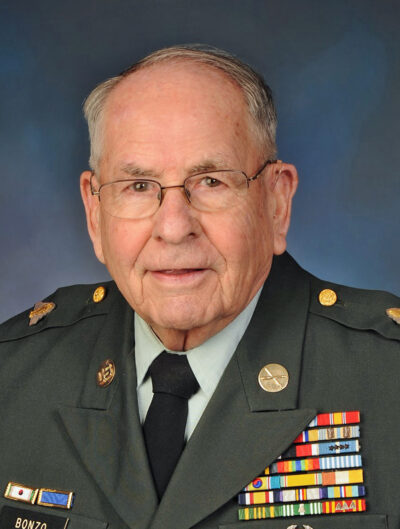 Max Ray Bonzo – our husband, father, grandfather, great grandfather, brother, friend, soldier, and hero – quietly passed away at the age of 90 on May 12, 2021 in his Cedar City home.

Max was born on October 4, 1930 to Bert and Eliza Bonzo. He graduated from Cedar City High School in 1948. He married his sweetheart, Susan Brockmeier, on March 9, 1963.  They were later sealed as a family in the St. George Temple. His wife and family were very important to him.

Max loved his country and had a deep respect for the flag of the United States of America. The Detur Digniori Outstanding Soldier was awarded to Max in 1968.  He was twice the recipient of the Utah National Guard Minute Man award in 1975 and 2015.

Max worked various jobs from the time he was eight years old which included jobs in service stations, paper delivery, dairy farm worker and cinder block home builder. He was employed by Lunt’s Hotel and Cafe as a fry cook, janitor, and bell hop. After returning home from the war, he was employed by U.S. Steel at the Iron Mines west of Cedar City where he worked for 16 years. During that time, he also worked at Zion Photo where he developed his love of photography. In 1972 he opened his own camera shop and portrait studio. He continued his work as a professional photographer for many years. After retiring, he continued to do photography from his home and managed SanJac apartments for Sellers Management Corp.

Max loved the outdoors. He enjoyed hunting, fishing, and sports.  He played and coached baseball teams for many years and was a true Cincinnati Reds fan.

He was a season ticket holder for the SUSC Thunderbird club. Max was a devoted gardener, always producing quality fruits and vegetables, which he generously shared with his neighbors and family.

Max was an active member of The Church of Jesus Christ of Latter-day Saints where he served in many capacities including Primary Teacher, Ward Bishoprics, YSA Bishopric and Young Men organization.

Max was known for his genuine care and kindness to others.

Live Streaming of services will be available via Zoom:
https://us02web.zoom.us/j/83277567964?pwd=NGZHcDYwUUZjcVkra3JoRjZhbUM3UT09