ST. GEORGE — Two people died Saturday in a structure fire that burned through a mobile home near Littlefield, Arizona.

Shortly after 1 p.m. MST, firefighters and emergency personnel were dispatched to a structure fire reported on Lees Ferry Road in the Desert Springs area involving a mobile home that caught fire and left two of the home’s occupants unaccounted for when fire crews arrived.

Anita Mortensen, public spokesperson for the Mohave County Sheriff’s Office, confirmed with St. George News that both individuals died in the fire.

During the incident, firefighters arrived and found the structure fully involved in flames with fire shooting from the windows; a travel trailer located just feet from the primary residence was also on fire, Beaver Dam Littlefield Fire Chief Jeff Hunt said. Crews immediately initiated a defensive attack on the blaze in an effort to stop the spread of the fire. which had already destroyed more than half of the structure.

A defensive attack is an exterior fire attack with the emphasis on exposure protection where the fire department’s resources are focused on protecting surrounding structures and mitigating the damage when the fire has progressed to a point that it becomes too dangerous or unstable for firefighters to enter and initiate an attack from inside the structure.

“We started with a defensive attack as soon as we rolled up,” Hunt said. “And we continued those efforts until the fire was out.”

Hunt said he broke through one of the windows to cool down the structure and stop the spread of the blaze. An engine and two water tenders maintained a continuous supply of water to crews battling the blaze who were soon joined by firefighters from the Mesquite Fire Department.

The attack continued for more than two hours, Hunt said. The blaze spread throughout most of the home and destroyed the travel trailer parked nearby. It was extinguished before it had a chance to spread to a second mobile home located approximately 10 feet from the residence. No other structures were reported damaged or destroyed.

With the active flames extinguished, crews remained on scene for at least another two hours conducting an overhaul to ensure that any embers that could smolder and reignite were completely extinguished.

The bodies were recovered shortly after the fire was extinguished.

Hunt said that statements gleaned from the scene indicated that an individual was burning yard debris earlier that morning, but once the task was completed, the fire appeared to be completely out, according to information provided to fire officials by a witness at the scene.

Then, when a resident walked out of their home, they could see flames shooting from the mobile home. Although fire crews had arrived within minutes of the call, the blaze was already rapidly spreading through the structure, Hunt said. Firefighters did everything they could to minimize the damage, he said, but it was too late to save the home.

Mohave County Sheriff’s Office also responded and opened an investigation that is still ongoing. Mortensen said the names of the two individuals killed in the fire will be released once family notifications have been completed. Beaver Dam Littlefield Fire and Rescue also responded to the scene.

The cause of the fire has yet to be determined.

A recent uptick in calls has kept emergency medical and fire crews in Littlefield busy over the last few weeks, Hunt said, including a crash that severely injured a driver who was flown to St. George Regional Hospital in serious condition. 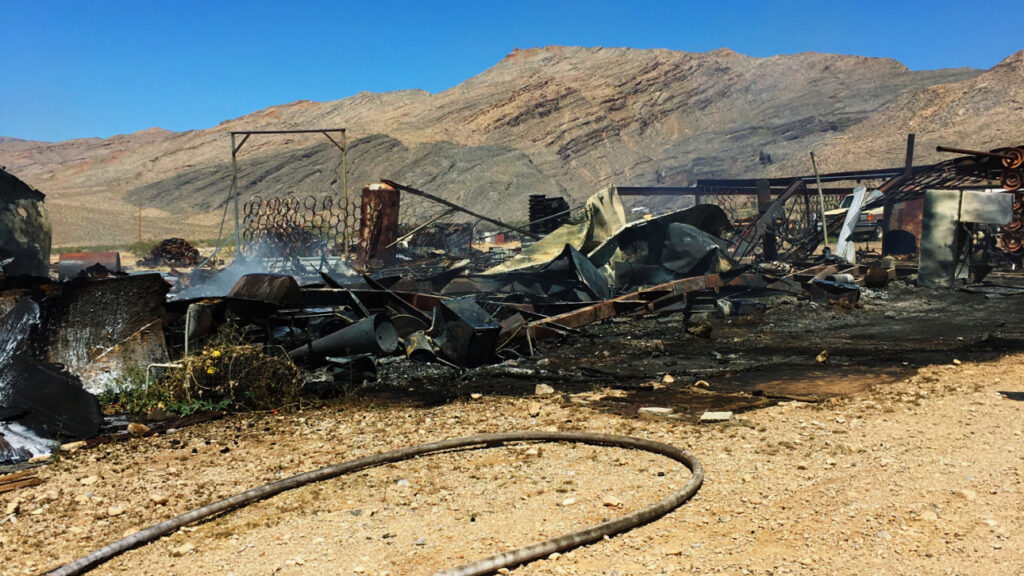 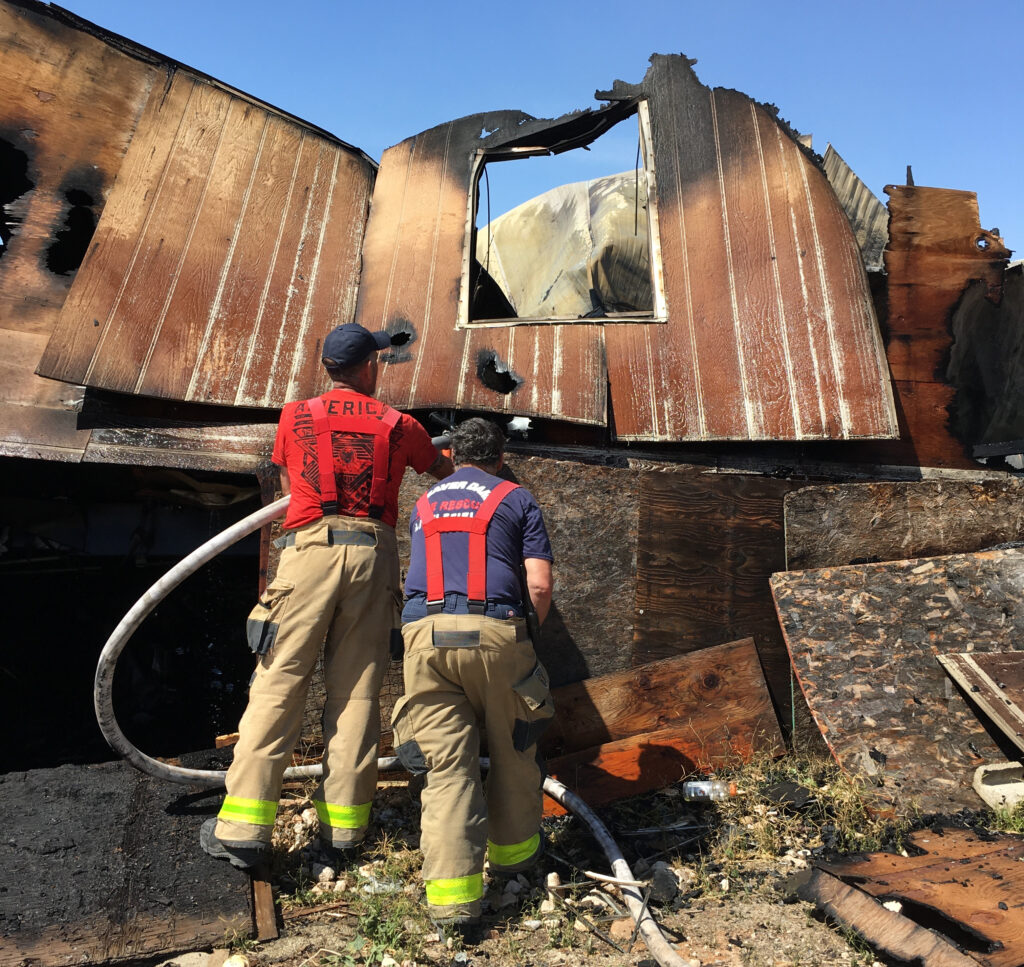 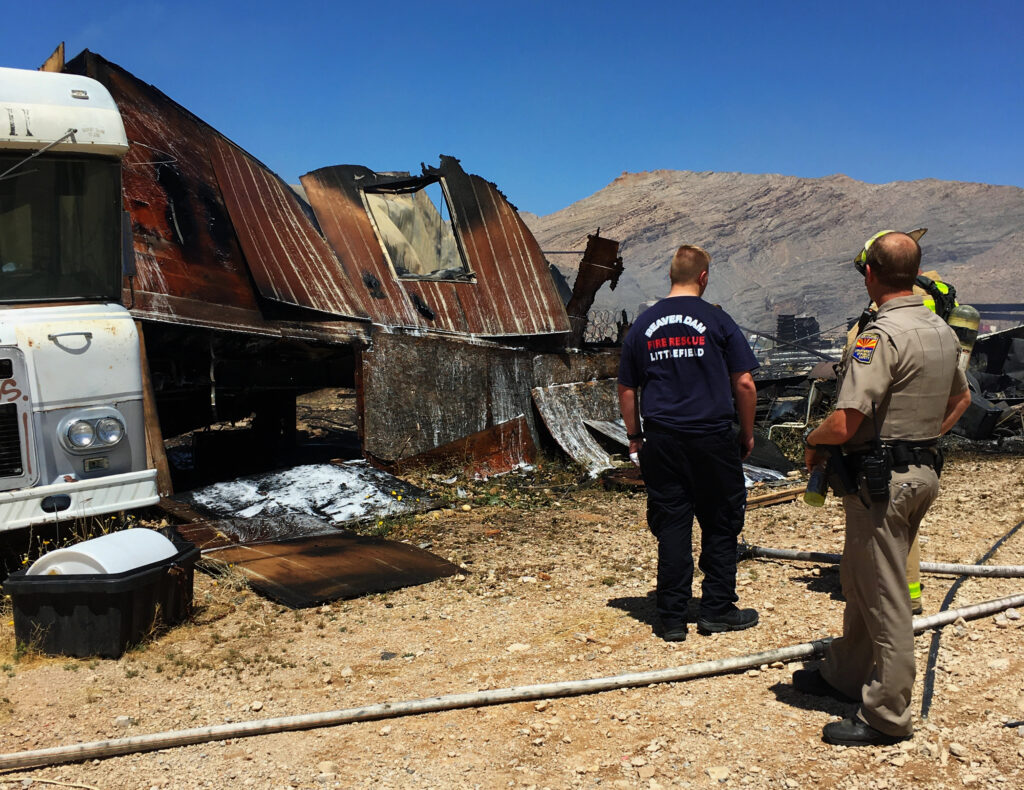 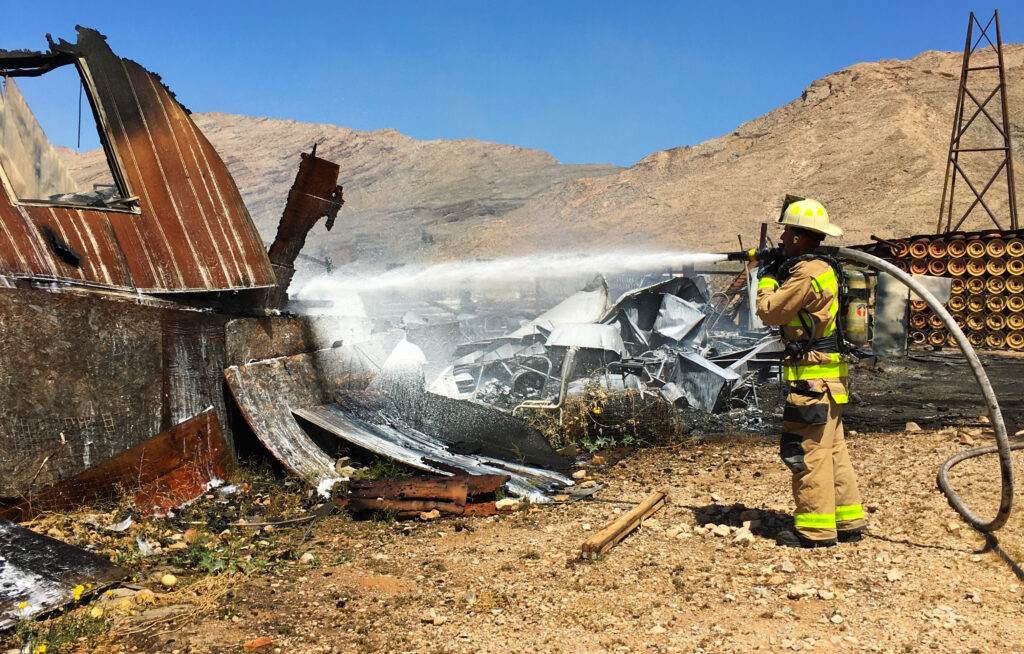