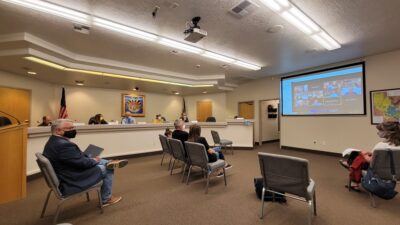 In a 3-2 vote, the council decided against approval of the first step toward the creation of a public assistance entity for the resort, a setback for the developers who said they need city and county help to enhance the resort with an underground parking garage as well as a “culinary village” of restaurants and shops above the parking garage.

Representatives for Enlaw LLC, the developer of the new resort, told the council Thursday night that the initial investment of $5 million by Ivins through tax breaks and additional property taxes to be paid by residents of the new resort would result ultimately in much more net revenue for the city in the long term.

“We’re asking for $5 million in investment to get $30 million in return,” said attorney Damon Georglas representing Enlaw. “We need you to be our partner in this”

Council members Dennis Mehr and Sue Gordhammer have previously expressed skepticism about providing public aid for the project since it was first proposed by the developer last November, but the balance of the council was shifted when council member Cheyne McDonald provided some skepticism of his own Thursday night.

The main reason, McDonald said, was that the developer’s proposal hinges on the additional public aid from Washington County and the Washington County School District. The school district is included because the resort plans to offer an educational nature preserve that could be used by schools for educational purposes and field trips.

“I do have reservations about approving the CRA (community reinvestment area) at this time,” McDonald said. “By approving it now, it gives the appearance that we’re in full support of it without knowing where (the county and school district) stand. It doesn’t mean I’m fully against it, just not now.”

Mayor Chris Hart indicated that initial discussions between the developer and the county and school district haven’t provided firm answers.

Mehr, who appeared at the meeting via Zoom, noted that the proposal was contingent on county and school district support or Ivins would pull out, and unlike Washington County and the school district, which have provided public financing to private projects before, he said this is Ivins’ first experience with such a proposal.

“The county has dealt with these kinds of things more than the Ivins City Council, and they are pausing,” Mehr said. “I can’t fathom why we would pass this tonight.”

Enlaw owner Patrick Manning, who was in attendance with his family in council chambers, made a plea for the aid, saying he was optimistic that he will be able to work with the county and school district “with a little education.”

But he added that he was hoping to also receive a vote of confidence from Ivins by approving the start of a community reinvestment area.

“We’re talking about bringing in $40 million more revenue for the city,” Manning told the council. “Give us a little olive branch.”

To this, McDonald responded that his “olive branch” was that he wouldn’t necessarily cast a “no” vote in the future.

Per Gordhammer’s request in the council’s April 1 meeting, the developer provided financials on what the project would look like with or without public financial support.

The financials, which were endorsed by the city’s  Financial Manager Lane Mecham, showed that under public assistance, the city ultimately would gain $12,398,000 in additional revenue over the next 30 years and $36,259,000 in the next 50 years than they would without city assistance.

However, Mecham added the financials are based on “assumptions,” such as revenue from the added value of the culinary village and additional rooms that would come with an underground parking garage.

Mecham said there would be no additional property taxes ultimately for Ivins residents other than those living in the resort.

Hart, expressing support for the proposal as a nonvoting member, said there is a misconception that people’s property taxes will be raised.

“Ultimately, all of the revenue comes directly from the project, not residents,” Hart told St. George News after the meeting.

But Gordhammer, while praising the financial report, said it wasn’t time to pull a trigger on setting public financing in motion.

“My understanding is it can’t happen without them,” Gordhammer told St. George News, referring to the county and school district. “I want to know where they stand.”

Mehr, who took issue with the reference to “in the best interests of the city” in the ordinance, said Ivins is at a crossroads.

“We’re undecided who we represent, whether we want to be a resort community or a bedroom community. This sets a historical precedent … one we may regret,” Mehr said. “Black Desert has a vision. I love it. Let the market bear that vision.”

Hart pointed out that without public assistance, the underground parking garage would be replaced with an eight-acre surface parking lot with 1,000 stalls and no shops or restaurants.

“Black Desert is going to be built,” he said. “Those opposed to this when seeing an eight-acre parking lot will be sorely disappointed.”

Manning said the underground garage is not something that could come later.

“It’s as simple as we can’t build that first phase and then build a 30-foot-deep hole,” Manning said, though Gordhammer still maintained that as far as she was concerned, it was not a “do now or don’t” situation.

City officials, including City Manager Dale Coulam and Mecham said the creation of the community reinvestment area would not lock the city in to providing the tax break and could ultimately be called off if the additional support does not come from the county or school district.

Council member Derek Larsen worried that the city was in danger of passing up a long-term opportunity.

“The city does lose a nice amenity if we don’t do this,” he said. “I see a benefit for the city. I don’t see a downside.”

“If we are all in for this project, we need to take this step forward,” Johnson said. “If not, then we need to stop. This shows we support this.”

Ultimately, with Mehr, Gordhammer and McDonald voting no, the motion to create the community reinvestment area failed.

Hart told St. George News after the meeting that the “no” vote Thursday was not necessarily a final no from the council.

“I don’t think it’s over,” he said. “The council wants to see what the county and the school board have to say.”

Chris Reed serves as an editor and reporter for St. George News. He has steadily moved east after growing up among the Valley girls of Southern California’s San Fernando Valley. He graduated from Cal State Northridge before spending a decade in Las Vegas. As a sports reporter and editor, he once compared shoe sizes with Shaq. As a news reporter and editor, he has covered parades, triumphs and tragedies. He also once got close to the stars doing publicity for a space module builder. He came to St. George for love and has grown to love the community. He is the proud father of two boys, his youngest a champion against both autism and Type 1 diabetes.