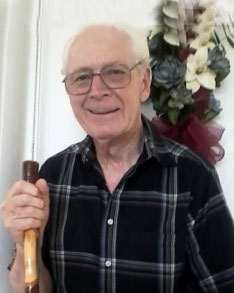 Lynn grew up in Flowell, Utah, on a dairy farm with his siblings. After graduating from high school, Lynn enlisted in the Air Force. He served as a mechanic and gunner on the B-26 Invader. During the Korean War, he flew in 22 combat missions. As a result of his service to our country, Lynn had the opportunity to travel to many places such as Korea, Japan and Alaska. He attended the University of Utah, where he earned a bachelor’s degree in speech and drama with a minor in biology. This is where he met the love of his life, Carolyn.

With a strong work ethic, he was not afraid to work with his hands – he was often heard stating, “I’m up, everyone’s up.” He rarely complained. In fact, it took him over 50 years to tell Carolyn that he didn’t like broccoli! He helped mold the future generations, not only as a schoolteacher, school administrator and scout leader, but also as a father, grandfather and great-grandfather. Many fondly refer to him as a “tough, old bird.”

For those that would like to attend virtually, use the Zoom link: http://bit.ly/LynnDavies

We would like to thank the staff at the Spring Gardens Memory Care unit for taking such loving care of Lynn since his arrival and during this pandemic. His passing was not Covid-19 related.

Arrangements are made under the direction of Spilsbury Mortuary, 110 S. Bluff St., St. George, Utah, 435-673-2454. Friends and family are invited to sign his online guest book at www.spilsburymortuary.com.