ST. GEORGE — With the help of the U.S. Fish and Wildlife Service and a class of high school science students, biologists from the Utah Division of Wildlife Resources successfully released 5,000 adult woundfin into the Virgin River on Tuesday.

The stocking, which took place at Confluence Park in LaVerkin, was the first of two woundfin stocking events that will ultimately release more than 10,000 of the endangered fish.

Melinda Bennion, native aquatics biologist for the Utah DWR, coordinated the release of the fish and provided a firsthand educational experience for the students from Shaunna Goldberry’s environmental science class at Tuacahn High School.

“I often ask people, ‘If woundfin went extinct, would it make a huge difference to you?’” Bennion said. “Woundfin eat aquatic plants and bugs and decaying material. If we didn’t have woundfin, it would start impacting other things until eventually people would see the impact.”

Bennion said it might mean more mosquitoes or differences in water quality.

“Some people might not care about the bugs or things like that, but where does our drinking water come from in this county? The Virgin River.”

Woundfin are small fish – few individuals ever grow larger than 4 inches in length. Their average lifespan is one to three years, and they spend their entire lives in tiny sections of the Virgin River. They are scaleless, similar to catfish, and named for their sharp dorsal fin.

Tuacahn students were able to help Bennion and her colleague, biologist Sarah Siefken, by changing the water in the temporary holding tanks and measuring a number of the specimens before their release.

By stocking adult woundfin, biologists hope the released fish will find and mate with wild woundfin, boosting population numbers and continuing a recent trend of recovery.

Woundfin were federally listed as an endangered species in 1970. They are threatened by invasive fish species, low water levels and pollution – problems that have been introduced or at least accelerated by human activity, Bennion said.

While the exact number of individuals in the wild is unknown, the Utah Division of Wildlife Resources conducts annual studies of sections of the river and compares fish populations year to year. This is accomplished by using a seine, or weighted net, to catch and catalog fish.

“Their numbers correlate perfectly to our water year,” Bennion said. “If we have a really great water year, then we tend to have good fish numbers. Our biggest problem with nonnative fish are the red shiners. The removal of red shiners from the Virgin River is critical for woundfin recovery.”

First introduced into the Colorado River system in the 1950s, red shiner are native to the Mississippi River basin. They compete for food and shelter with the woundfin and other native species. Despite their small size, red shiner also threaten woundfin young as predators.

Bennion said the first step to removing red shiner was installing river breaks to segment populations and prevent further migration upstream. Periodically, workers from the division of wildlife will work their way downstream to manually catch and kill invasive fish. The last resort is catching and temporarily removing native fish while a section of the river is treated with piscicides.

U.S. Fish and Wildlife Service biologist Jesse Trujillo made the eleven-hour drive from the hatchery overnight with a colleague. Trujillo said that days at the hatchery in Dexter, New Mexico, are full of observation, feeding, tagging and research of the 14-16 endangered fish species raised there.

Woundfin and the Virgin River

Successful recovery of all these species is wholly tied to the continuing habitability of the Virgin River. To that end, the division of wildlife teams with the Virgin River Program to coordinate their efforts with other federal, state and local agencies.

The local coordinator for the Virgin River Program, Steve Meismer, said the river is a complex system with a lot of competing interests tied to it. People misunderstand the river or misrepresent it by comparing it to other river systems, even other river systems in the West, Meismer said.

He said the biggest difference he has noticed compared with other places is the wide-ranging fluctuations in streamflow.

“For the Colorado or Green rivers, 3,000 cubic feet per second is a low water year,” Meismer said. “Here, we can get down to double digits. It’s not abnormal to see maybe 50 CFS in the Virgin River or sometimes even less. But then at the same time, when we get the right weather conditions we might have 20,000 CFS.”

The most important thing to remember is that everyone has a role to play in protecting the river, Meismer said.

“Going back to some of the things that outdoors people have been taught for a long time, leave no trace,” he said. “Don’t leave your garbage out and around. Don’t bring some other fish species with you from another place. Be a good steward of the environment. We as humans have the best capability for protecting things, yet we don’t seem to do it all the time like we should.” 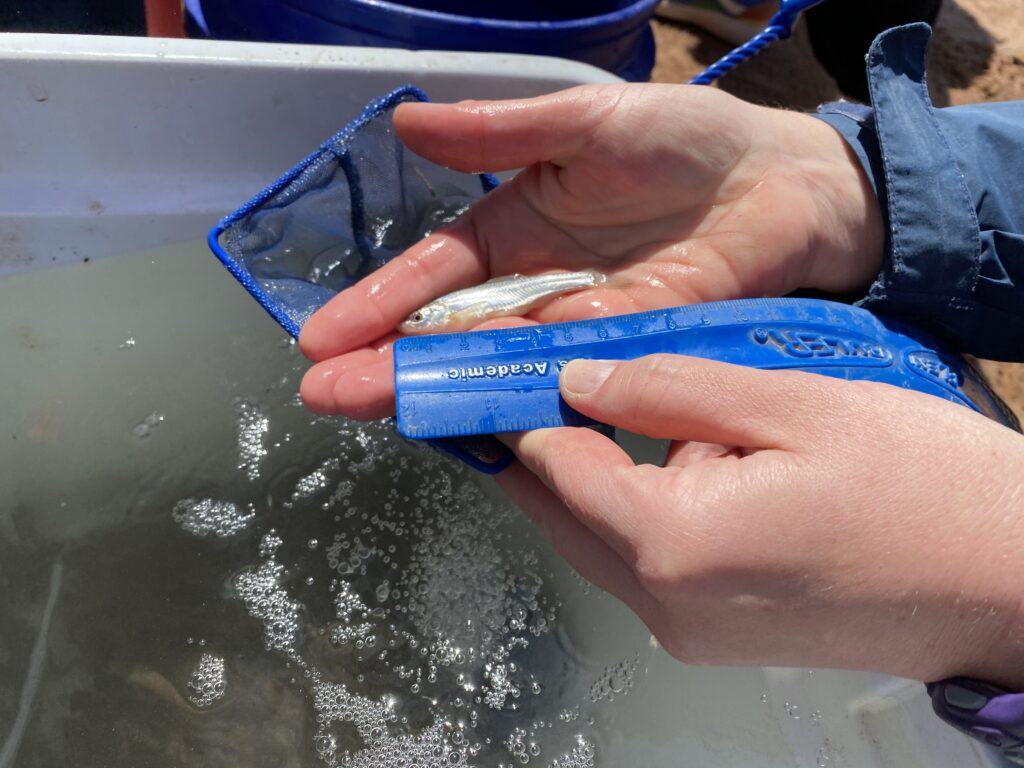 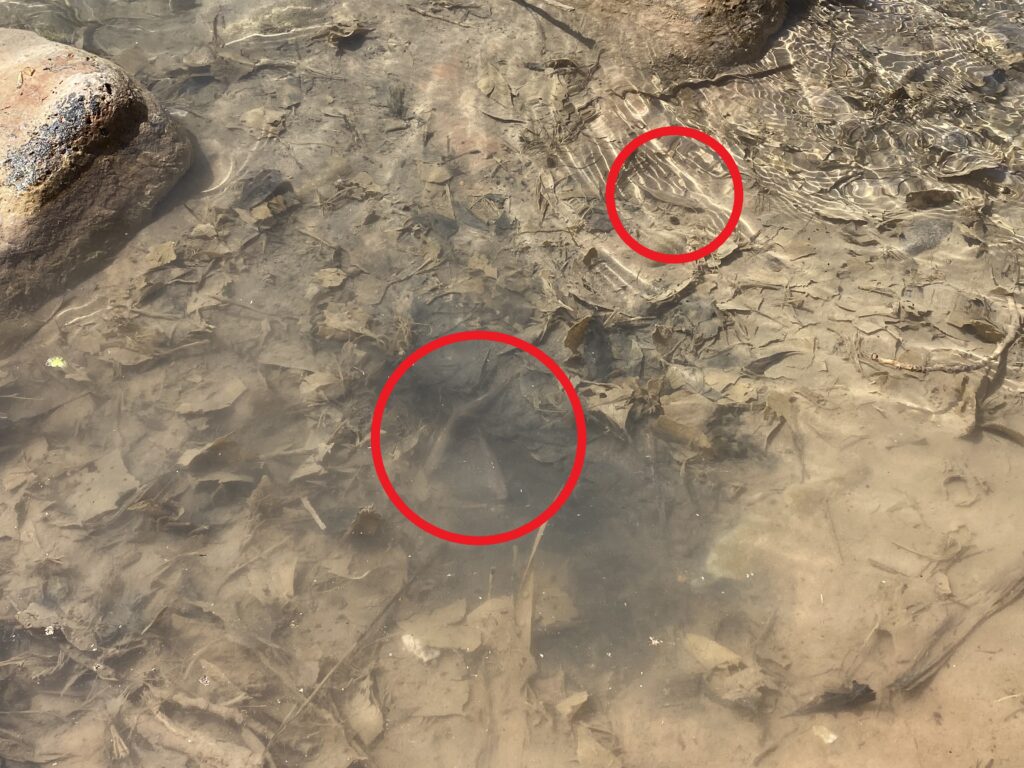 The size and coloration of woundfin act as camouflage against the sand and rocks of the river, LaVerkin, Utah, March 30, 2021 | Photo by Ammon Teare, St. George News 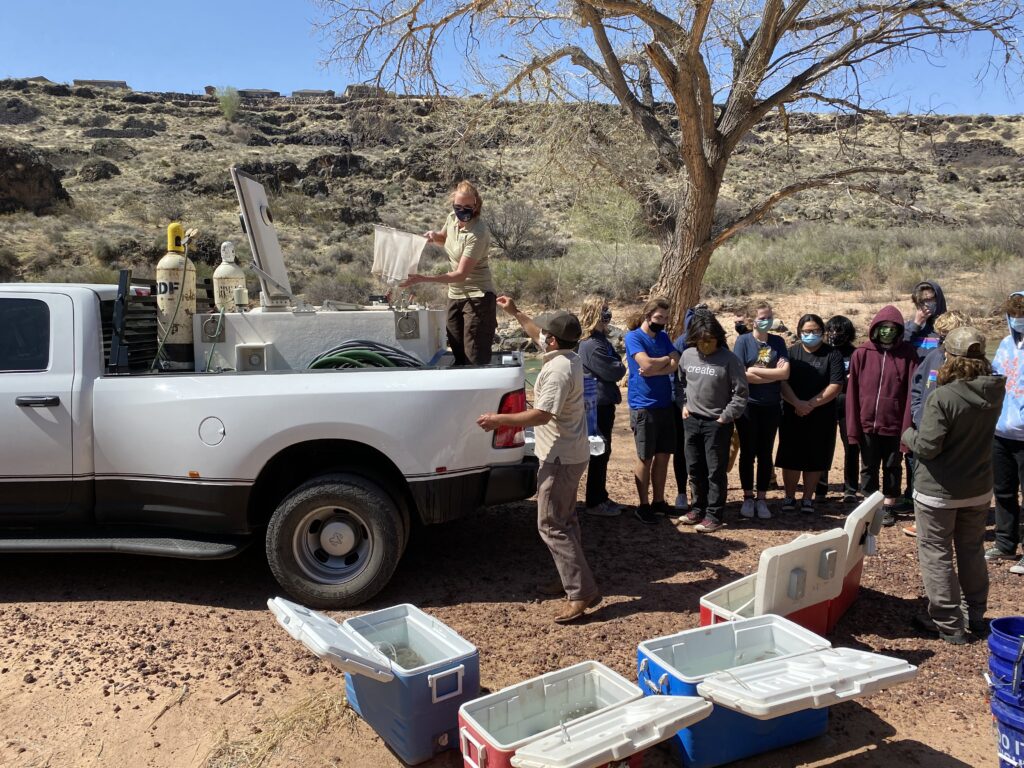 Biologists from the U.S. Fish and Wildlife Service out of Dexter, New Mexico, raise the woundfin along with other endangered species, LaVerkin, Utah, March 30, 2021 | Photo by Ammon Teare, St. George News 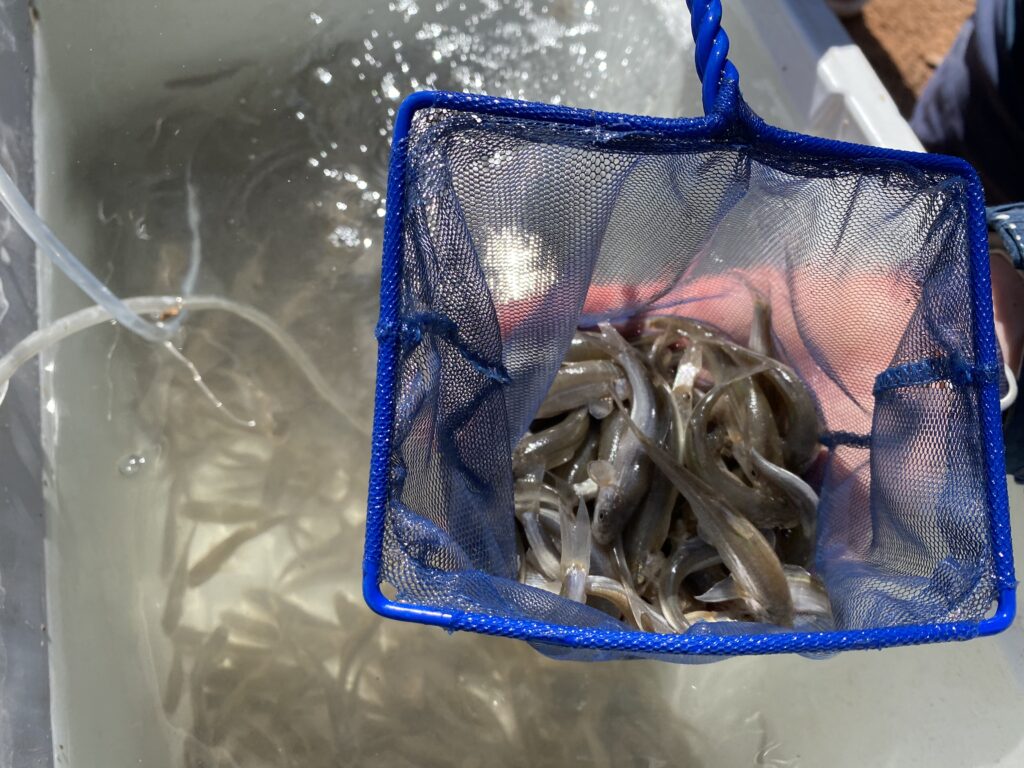 A mass of woundfin being drawn up to be measured. Note the faint green mark of a VIE tag behind the dorsal fin, LaVerkin, Utah, March 30, 2021 | Photo by Ammon Teare, St. George News 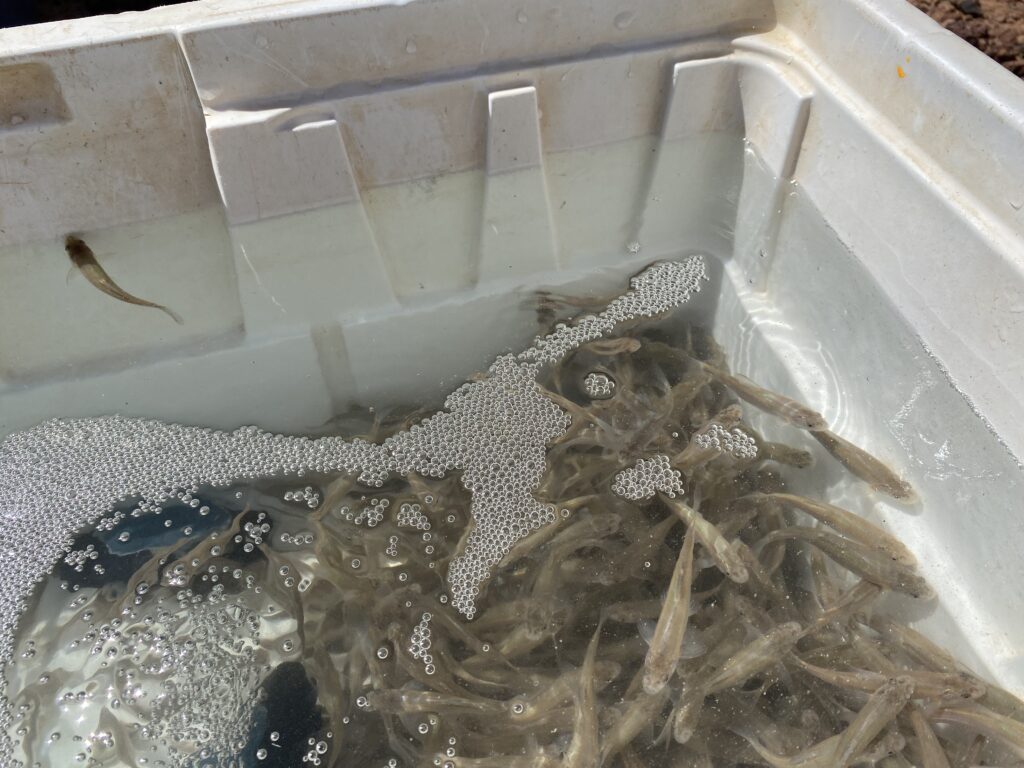 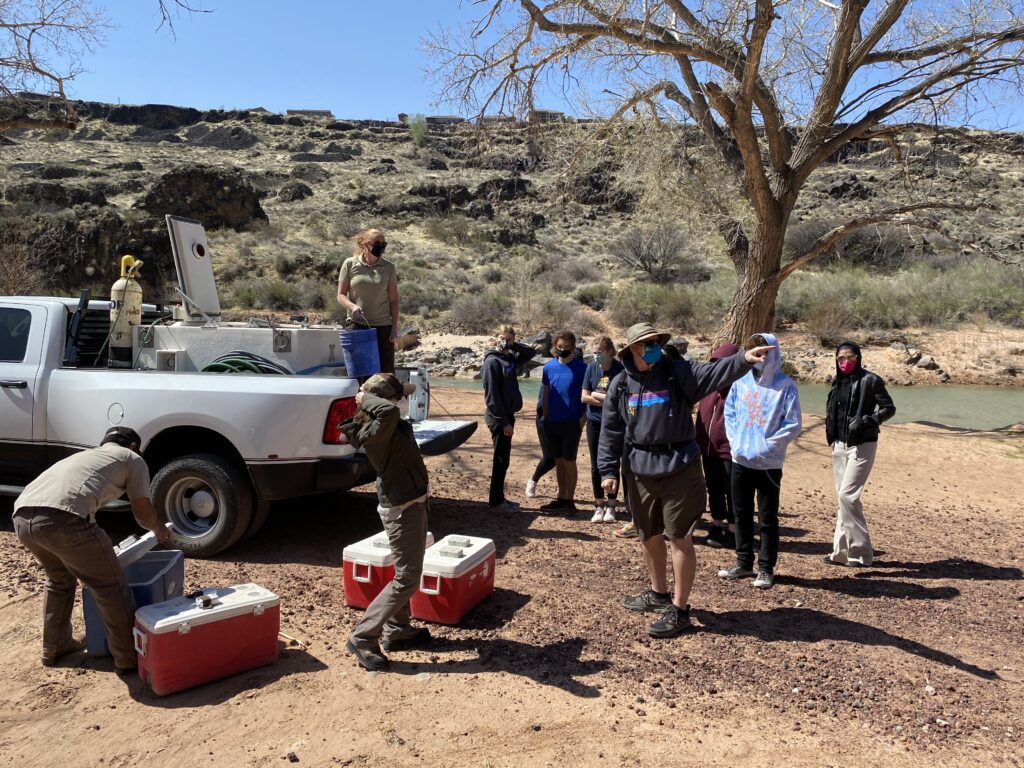 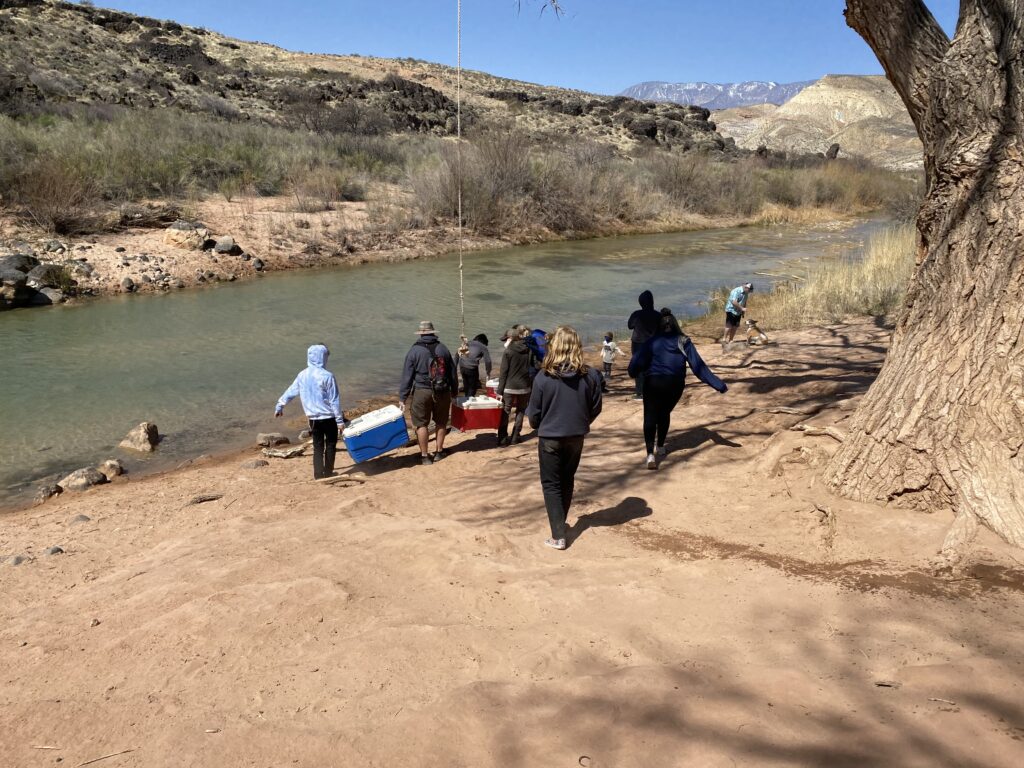 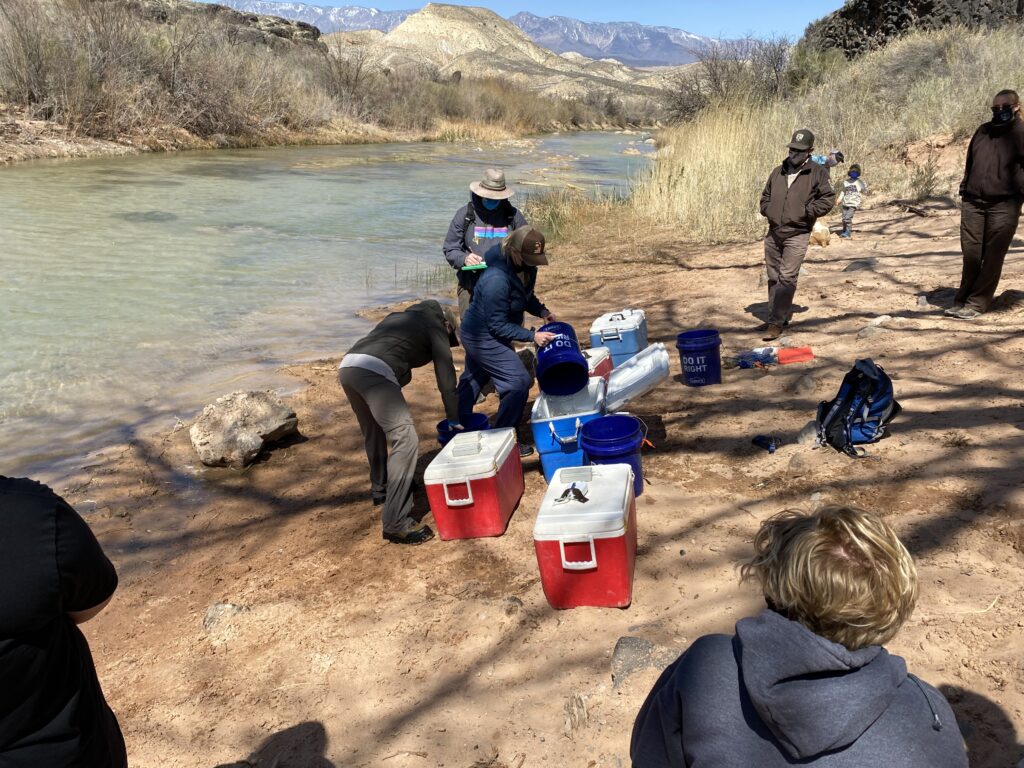 In order to acclimate the woundfin, the water in their holding coolers is mixed with more and more river water until the temperature and water content is very near river conditions, LaVerkin, Utah, March 30, 2021 | Photo by Ammon Teare, St. George News 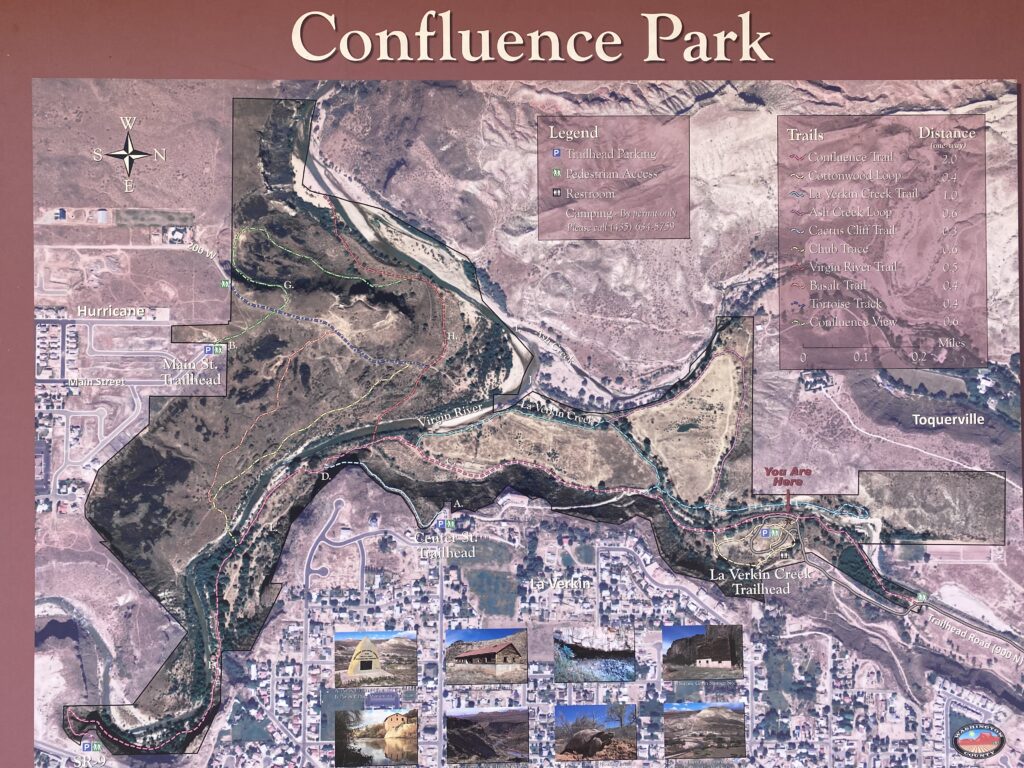 A map of Confluence Park, where the woundfin were released, at the LaVerkin trailhead, LaVerkin, Utah, March 30, 2021 | Photo by Ammon Teare, St. George News