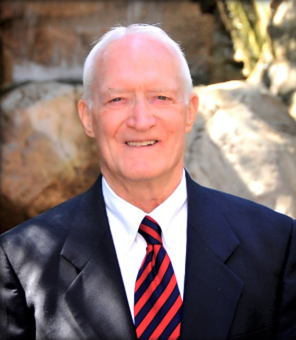 Reginald Wayne Shute passed away peacefully on March 24, 2021. His remarkable life was filled with love for the Restored Gospel of Jesus Christ and generous service to others.

Wayne was born April 25, 1933, to Reginald Albert Shute and Clara Irene Barge in Tuberose, Saskatchewan, Canada. He had one sister, Barbe (deceased). He spent his formative years in the Okanagan Valley of British Columbia, where at age 19 he was introduced to The Church of Jesus Christ of Latter-day Saints. He was baptized on Feb. 22, 1953.

Wayne received a bachelor’s degree from Brigham Young University (1955), a master’s degree in educational administration also from BYU (1959), and a Ph.D. in education from the University of Southern California (1964).

Professionally, Wayne’s career was focused on teaching and education. He worked for the department of continuing education at BYU (1964 – 1968) and was the vice president/dean of students at The Church College of Hawaii in Laie (1972 – 1974), now BYU – Hawaii. He returned to BYU – Provo in 1974 where he taught in the department of educational leadership and directed the intern doctoral program for nearly 25 years. He has kept in close touch with many of his doctoral students, who have become dear friends. He spent some of these years as a visiting professor in England and Wales. He retired in 1997.

Wayne loved the Restored Gospel of Jesus Christ and devoted his life to service in the church. He had all respect and admiration for modern-day prophets and apostles and welcomed every call to serve. He was first called as a young missionary to Samoa (1955 – 1958), later as the mission president of the Apia, Samoa Mission (1968-1971), and again as the temple president of the Apia, Samoa Temple (1997 – 2000). He made vital contributions to the growth of the church in Samoa. Wayne has stayed dear friends with his missionaries and the people he served.

Wayne also served as a regional representative, as well as on the church correlation committee for many years. He was actively involved in family history work and served as a sealer in St. George, Utah, temple. With Lorna, Wayne served additional missions for the Church: humanitarian director of welfare services in Yerevan, Armenia (2003 – 2005), and member and leader support missions in Singapore (2007 – 2009) and in Athens, Greece (2010). With his wife, Rhea, Wayne served in the Brisbane, Australia, Mission (2014 – 2015).

Wayne spent much of his time reading, authoring many books, giving lectures and leading study groups. He was also involved in many humanitarian projects. Most recently, he helped raise money and organize the reconstruction of a small primary school in Fiji. His life of faithfulness and wholehearted service has had a far-reaching impact all over the world.

Wayne is survived by his wife, Donna, his nine children, 41 grandchildren and 22 great-grandchildren.

Wayne’s funeral service, a celebration of his remarkable life, will be held on Friday, April 2, 2021, in the Sunset Stake Center at 82 North Dixie Drive, St. George, Utah. Friends are invited to come and greet family members from 9:30 – 10:30 a.m. The funeral service will begin at 11 a.m. followed by a graveside dedication at 1 p.m. at the Tonaquint Cemetery.

We warmly invite you to attend the funeral service. All those who wish to attend must RSVP using this link. In consideration of COVID-19, in-person attendance is limited.

The funeral service will be broadcast live online. To view, use the following link: http://mywebcast.churchofjesuschrist.org/stgeorgeutahsunsetstake

All are invited to share fond memories or stories of Wayne in the family journal. Email those to: [email protected]

Arrangements are made under the direction of Spilsbury Mortuary, 110 S. Bluff St., St. George, Utah, 435-673-2454. Friends and family are invited to sign Reginald’s online guestbook at www.spilsburymortuary.com