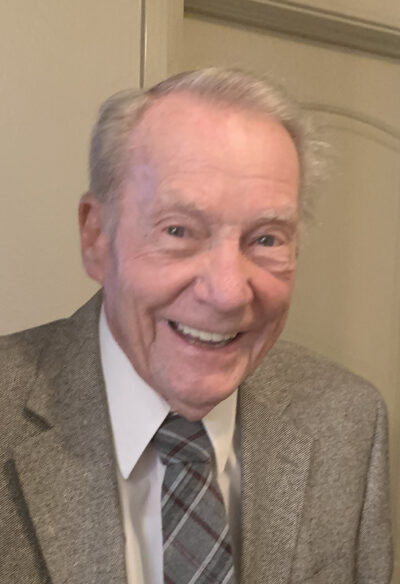 Ronald Llewellyn Garner died on March 22, 2021 from causes incident to age. He was 90 years old. Ronald was born in Ephraim, Utah on Feb. 5, 1931 to Alta and Burt Garner. He was the second of four children. Burtis was the oldest. John and Judy were his little brother and sister.

Alta and Burt raised their family in Salt Lake City, Utah. As a child, Ronald demonstrated unusual musical capacity. He became proficient with multiple instruments, including the violin, trumpet and French Horn.

When Ronald was 14 years old, his father died, leaving Alta to provide for the four children. Ronald helped by working as an usher at the State Movie Theatre in downtown Salt Lake and washing dishes at the old Eagle Gate Cafe.

Ronald attended West High School from 1945 through 1948. He was an excellent student graduating with honors. In 1948, Ronald enrolled at the University of Utah. Dr. Ronald Gregory, the Director of Bands at the U, became a father figure and mentor. Ronald earned straight A’s and became an accomplished musician.

While studying at the University, Ronald fell for Betty White, a beautiful student from Beaver, Utah. Ronald was too shy to ask for a date, but in 1953, out of the blue, asked Betty to marry him. Betty was so popular, Ronald thought he “better get his hat in the ring.” Ultimately, Betty agreed, but only on the condition that Ronald complete his master’s degree. They were married on Sept. 1, 1953 and Ronald got his master’s two years later. They eventually had six children: Randi, Bruce, Dan, Michele, Glade and Scott.

After graduation, Ronald needed a job. In early 1955, Arthur F. Bruhn, the Dixie College President, knocked at Ronald’s apartment door. He offered a teaching job at Dixie. Ronald accepted the offer and the family moved to St. George. Ronald loved Dixie College. He taught for 54 years, becoming one of the longest serving state employees in Utah history.

In 1960, Ronald took a teaching sabbatical to pursue a Doctorate at the University of Oregon. Ronald and Betty packed up their young family, now including four small children, and moved to Eugene, Oregon. Ronald excelled academically and after completing his dissertation, “The History of Musical Education in the Granite School District,” received a PhD in Higher Music Education in 1963.

In November 1965, 7-year-old daughter, Michele died from cancer. The entire Dixie community, past and current students, and their LDS Ward rallied around the Garner family. These many kindnesses cemented Ronald’s affection for Utah’s Dixie. Thereafter, he never considered leaving Dixie College.

When Ronald’s boys reached LDS mission age, he began working summers for the United States Forest Service to augment the family income. He was stationed in Pine Valley, Utah but also fought fires in Utah, Idaho, Wyoming and Montana.

Ronald was often assigned to work on the fire break line. It was backbreaking, dangerous work. He became a tough and determined fire fighter.

Ronald became passionate about running in 1983, after watching his daughter, Randi, finish the St. George Marathon. He ran the St. George Marathon annually for the next 11 years and completed two Salt Lake City Marathons. He ran races all over Utah, but his favorites were the Enterprise 10k every 4th of July, and the annual Bryce Canyon 10k, which became a family tradition.

Eventually, Ronald and Betty grew apart and divorced in 1991. Years later, Ronald got a second chance at love when he courted Susan Orchard, who also taught at Dixie. He asked Susan to marry and was thrilled when she accepted. They married on June 15, 1996.

Ronald and Susan loved to travel. They explored England, France, Germany, Switzerland, Austria, Venice, and Rome together and filled their home with mementos. They especially loved London and observed firsthand the birthplace of Susan’s favorite literature. When Susan died of cancer in 2014, Ronald was devastated. He lost his best friend, favorite traveling companion and most significant source of happiness.

In May 2020, Ronald, now 89 years old, moved into his daughter’s home (Randi and Steve Hunt) in Santa Clara, Utah. Randi and Steve provided astonishing, around the clock care for Ronald as his health deteriorated. On his 90th birthday, Feb. 5, 2021, Ronald experienced a heightened awareness and laughed and smiled, thoroughly enjoying his family, friends, beloved hospice caregivers, and birthday cake. It was a wonderful way to say good-bye.

Our family extends deep appreciation and gratitude to Ronald’s entire medical team at Horizon Healthcare and Hospice. They have been an unending source of happiness and hope not only to Ronald, but to our entire family. Thank you from the bottom of our hearts. Due to COVID concerns there will not be a public viewing or funeral, only a small family gathering.