ST. GEORGE — A line that feeds a water tank near Sand Hollow State Park sprung a leak Monday evening, flooding the streets of a nearby housing community with silty water and mud.

Residents  of the Dixie Springs community first started to notice the flooding shortly after 7 p.m. People rushed to help their neighbors whose houses were near the surging water, using shovels and a skid-steer loader to direct the flood waters.

Drew Evans and his wife and kids have been residents of the Dixie Springs neighborhood for three years. Their home is just down the street from the holding tank, and he told St. George News that by the time they saw the muddy brown water rushing past their house, it was nearly flooding their lawn.

“We got notice from our neighbor a little after 7:30,” Evans said. “He was already out trying to dig and get water diverted away from our house. Our house is dry, thankfully. This is a great community, and it’s great to see everybody come out and try to dig us out.”

Some of the people lending a hand lived next door or across the street from the Evans, while others came from across the neighborhood to offer their help. Ralene and Kevin Scott were a few blocks away when they first noticed the flooding.

“We were walking around the park, and we saw the dog park filling up with water, so we walked up here,” Ralene Scott said. “(The water) was quite a ways up on the sidewalk, so we had to walk six blocks back to bring the skid-steer because we thought it was going to end up flooding these houses. We didn’t want our neighbor to flood.”

Owen Orgill, who was helping clear mud from the sidewalks, said he “just grabbed a shovel.”

“We need to help each other,” he said. “That’s what the community’s here for.”

The Washington County Water Conservancy District manages the holding tank, and their operations manager, David Jessop, told St. George News that the 2 million gallon tank was under control very quickly after they were alerted to the leak.

“We had a main line break. It was our well line that feeds the tank up above Sand Hollow Reservoir,” Jessop said. “It was a culinary drinking water line. We drained a bunch of water out of that 2 million gallon tank. Nobody will be out of water with any luck, and we’ll have a bunch of cleanup to do.”

Washington County Water Conservancy District spokesperson Karry Rathje said the well line was shut off as soon as the leak was identified, and crews investigating the main line break found the source of the problem after they were able to drain some of the water.

“There was a mechanical joint failure where two pipelines joined together,” Rathje said. “There was still enough water in the tank to meet the needs of the Dixie Springs residents, so there was no interruption of service to residents.”

Rathje said that workers at Sand Hollow State Park and Red Rock Spas and Pools were onsite with skid-steers helping the district remove sediment from the road. The pipeline is functional again, and repairs to the pipeline were completed within about three hours, she said. 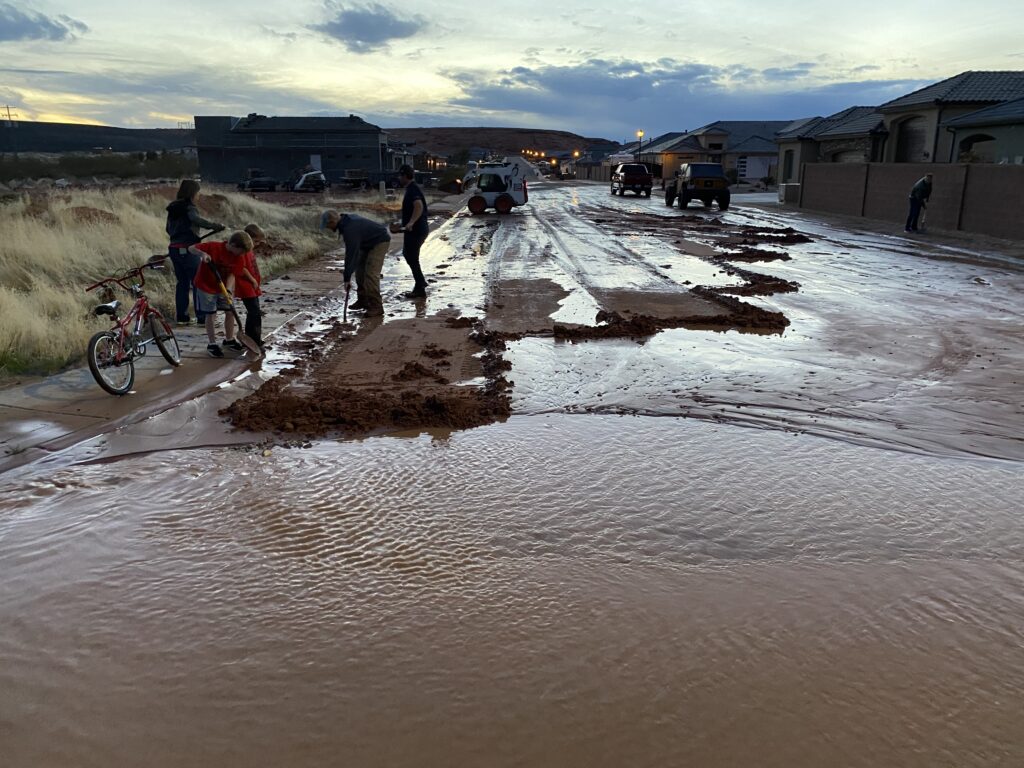 Water pooled in intersections, including here at the crossroads of 3400 West and 2900 South, Hurricane, Utah, March 22, 2021 | Photo by Ammon Teare, St. George News 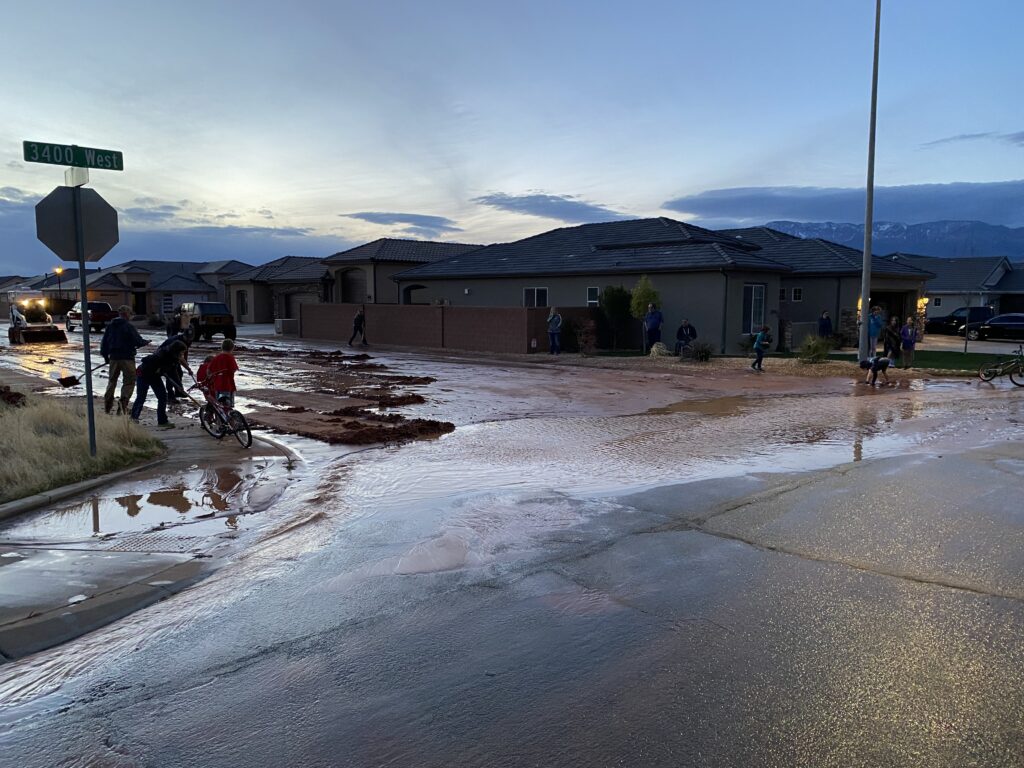 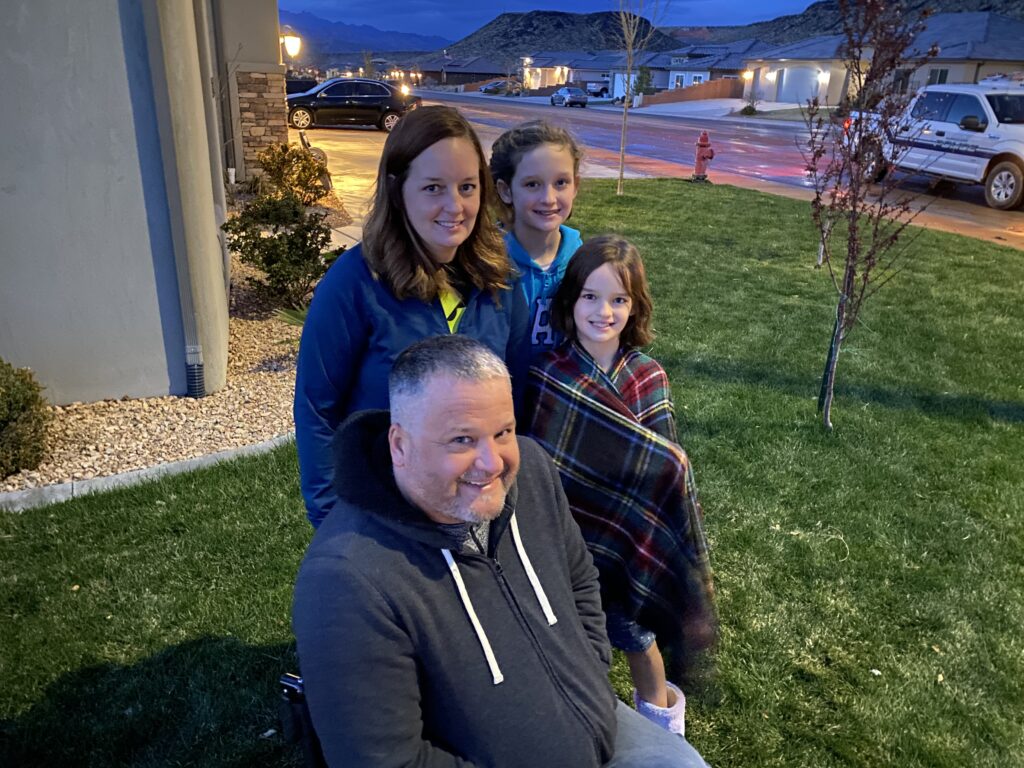 The Evans' family home was directly in the path of the flood waters, but their neighbors helped divert the flow, Hurricane, Utah, March 22, 2021 | Photo by Ammon Teare, St. George News 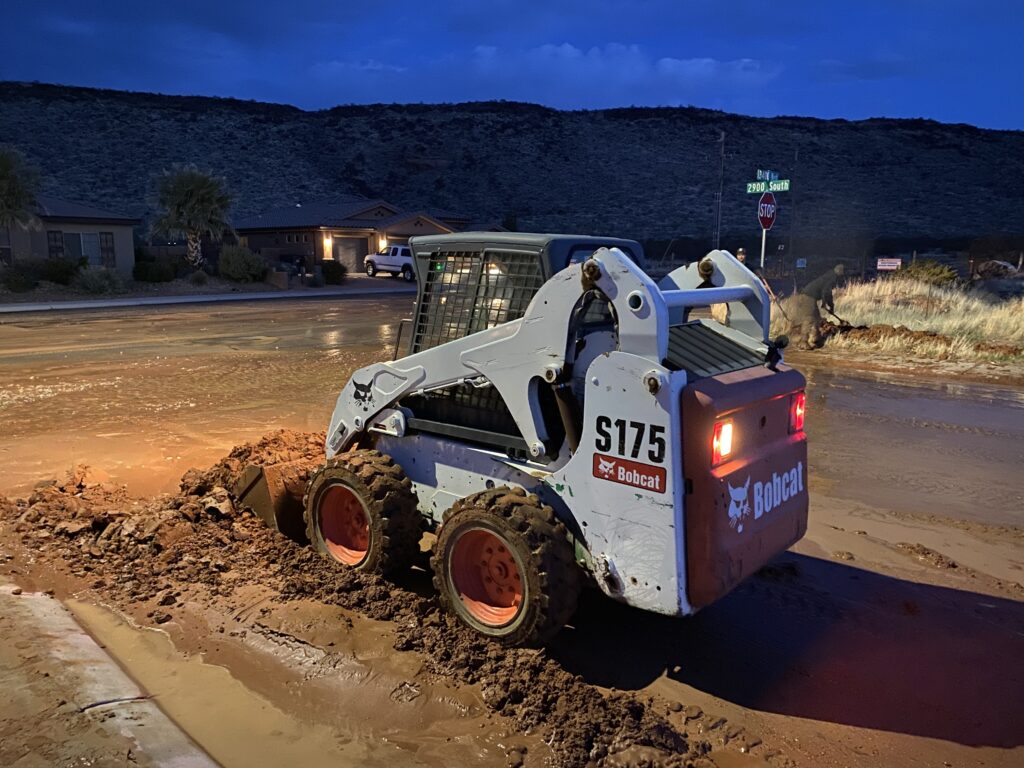 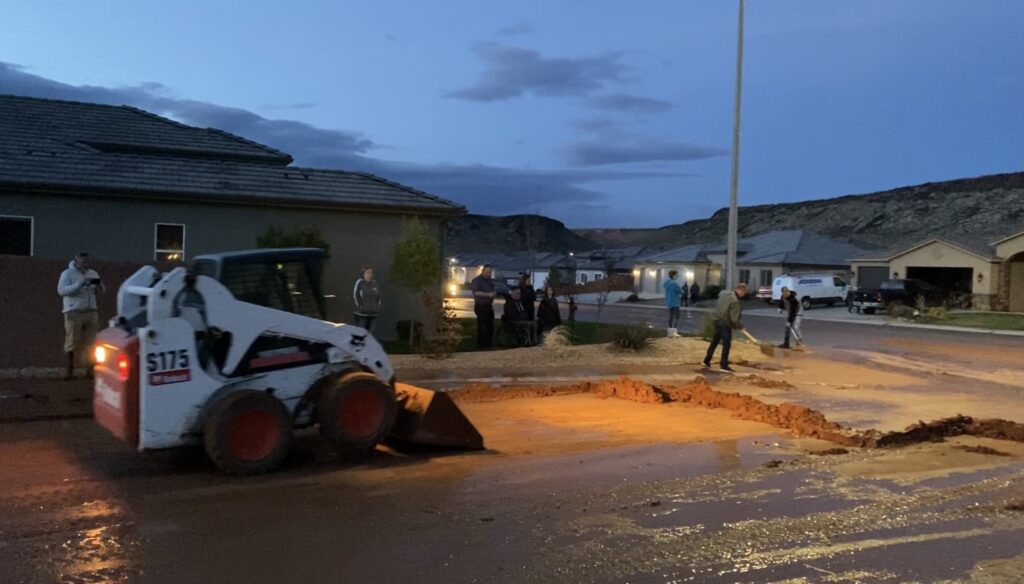 A skid-steer driven by Kevin Scott clears mud from the streets in the aftermath of a burst water main, Hurricane, Utah, March 22, 2021 | Photo by Ammon Teare, St. George News 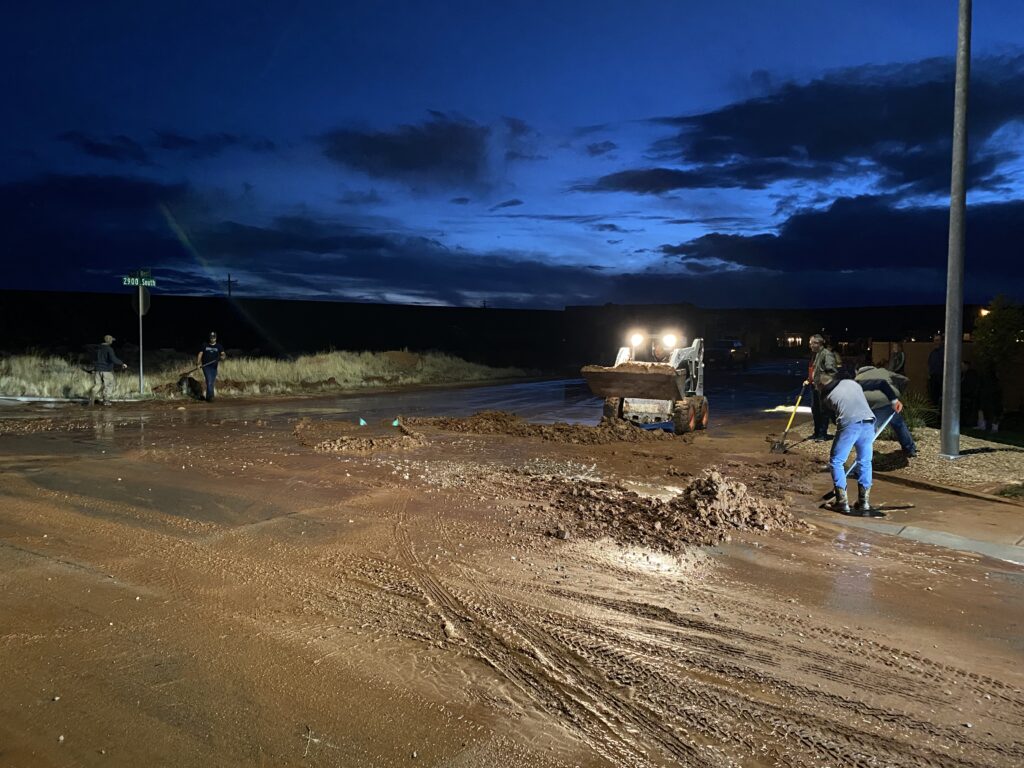 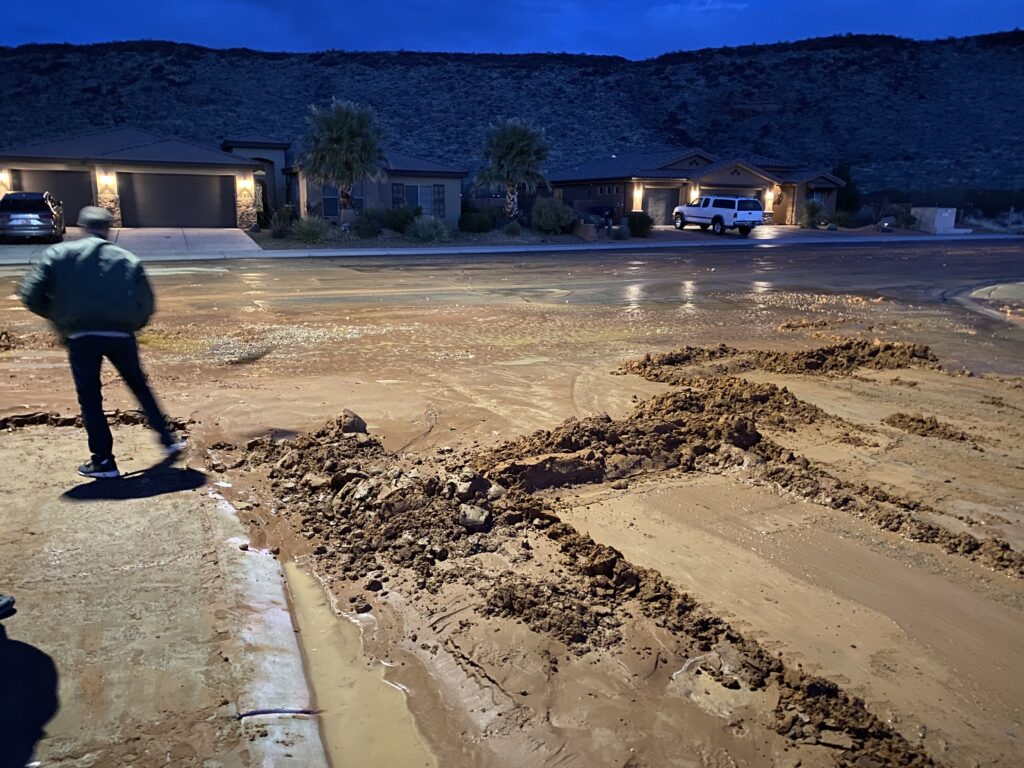 After the water stopped flowing, the sand and dirt deposited in the was cleared by men with shovels and a skid-steer, Hurricane, Utah, March 22, 2021 | Photo by Ammon Teare, St. George News