CEDAR CITY — Southern Utah University’s men’s cross-country team placed ninth overall out of 30 teams at the NCAA Division I championships in Oklahoma on Monday. It marked the best finish in SUU’s history. 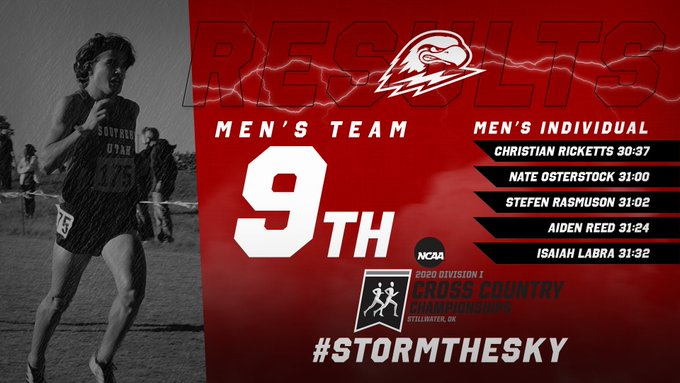 The event, held at Oklahoma State University in Stillwater, is considered to be the 2020 national championships, postponed from last fall due to COVID-19. Monday’s races, which were staged under windy conditions, featured the nation’s top 30 men’s and women’s teams, along with a host of individual qualifiers.

Leading the way for the SUU men was senior Christian Ricketts, who finished 31st overall with a time of 30:37.9 in the 10,000-meter race and posting a score of 28. He also earned All-American honors.

Winning the individual men’s race was BYU junior Conner Mantz, who pulled away at the end to finish in 29:26.1, more than 22 seconds ahead of the runner-up. The men’s team championship went to Northern Arizona, which placed four runners among the top 10. It was NAU’s fourth national championship in the last five seasons.

The BYU women’s team took first place overall, winning the national title by a commanding 65-point margin. Senior Whittni Orton, a native of Panguitch, coming off an injury and competing in her first race of the year, led for much of the middle third of the race but began to fall back a bit just past the 5,000-meter mark. She ended up placing 17th, just seconds behind teammates Anna Camp and Aubrey Frentheway, who took 11th and 15th, respectively.

'The most fun I've ever had': Looking back on SUU basketball's dream season