ST. GEORGE — Lu Fischer was in for a surprise when she saw the roiling mass of bees around her mailbox. Fischer, a St. George resident of 360 N. Donlee Drive, was warned about the melon-sized cluster of bees by a visitor that had come to her house by mistake.

Fischer called the St. George Fire Department, and they sent out a truck in addition to contacting a local beekeeper. Most of the passersby skirted around the property, with firemen warning neighborhood residents to give the mailbox a wide berth.

“I (also) called the post office, because I was afraid of the postman coming up there and getting swarmed,” Fischer said. “I don’t want to kill one bee. I’m always concerned about the bees, because we know that bees are very critical for our future.”

For their part, the honeybees were just acting out their springtime routine: traveling as a swarm as they leave an established colony to start a new one. Jimmy Frisby, a local beekeeper of five years who responded to the incident, said that the swarm was likely waiting for scout bees in the area to find a place for their new hive.

Frisby donned a protective suit and started gently spraying the swarm with sugar water. He explained that the sugar water collects on the bees’ wings and hampers their flight temporarily.

After spraying the cluster, he carefully brushed the bees into a waiting box with some slats of honeycomb. He said that while the bees are mostly harmless, you should be careful with how you handle a swarm.

“If you don’t know anything about bees, you need to contact the police or fire department, and they’ll dispatch somebody,” Frisby said.

Frisby responded to the fire department’s call with his wife. She waited in their red SUV as he gathered the swarm into the box. After most of the bees settled into the box, he loaded the box into the back of the SUV, while some stragglers still buzzed around it.

Frisby said that the bees act more like flies inside the vehicle, and that so long as he turned up the cold air conditioning in the vehicle the bees would remain calm. When they are released at their new home, the bees will swarm up into a cyclone pattern to orient themselves to their new surroundings, Frisby said. Interested parties can see his operation at 2781 Rio Vista Drive in Bloomington, Utah.

“I raise them and extract the honey,” Frisby said. “I raise trees and I raise the bees. I’m 79 years old right now, and I got into this to try and keep myself young.”

St. George Fire Department Capt. David Slack said that no one was stung as they waited for the beekeeper to arrive and remove the bees safely. They responded to the incident shortly after 3 p.m. on March 15, Slack said.

Honeybees play a vital role in the environment. Some scientists estimate that one out of every three bites of food we eat exists because of animal pollinators like bees. As such, it’s important to be cautious but remember that swarms are usually quite harmless, and the bees will move on if they are allowed to do so. 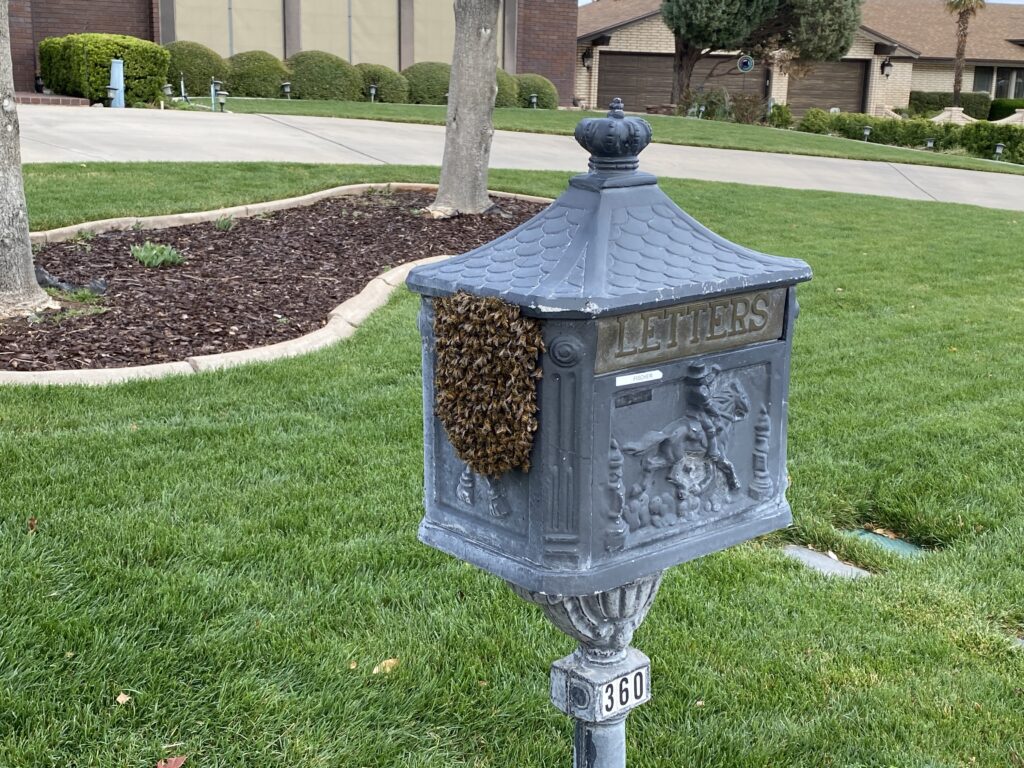 A reproductive swarm of bees attached themselves to the mailbox of a home, St. George, Utah, March 15, 2021 | Photo by Ammon Teare, St. George News 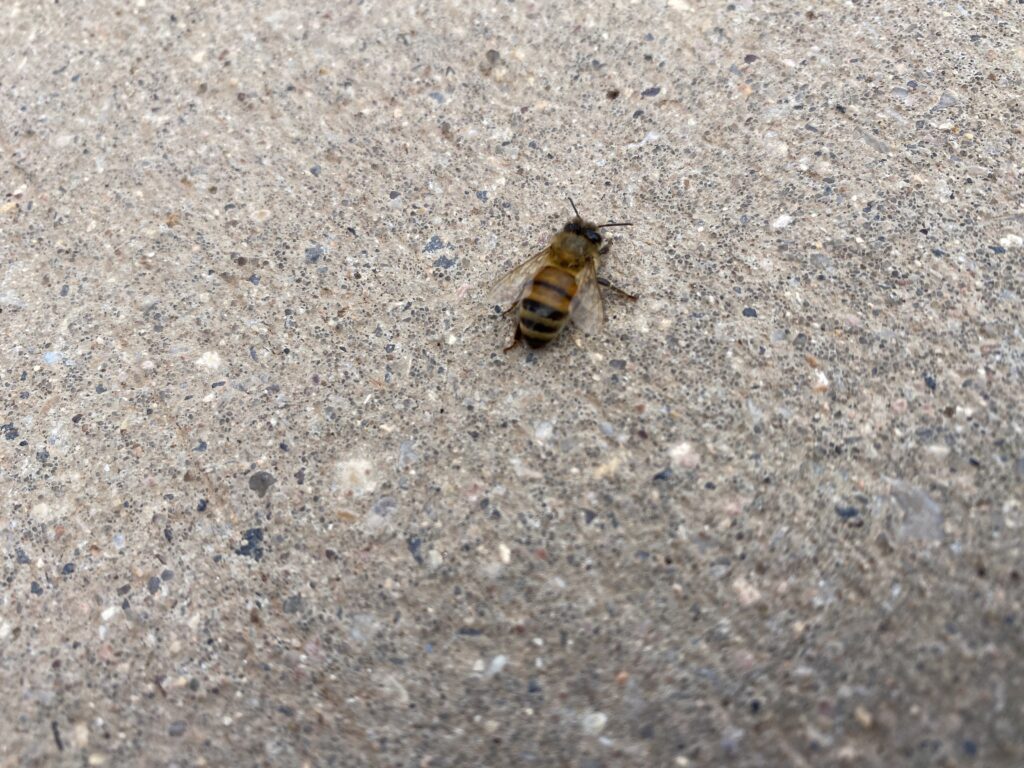 A lone honeybee on the sidewalk near the swarm, St. George, Utah, March 15, 2021 | Photo by Ammon Teare, St. George News 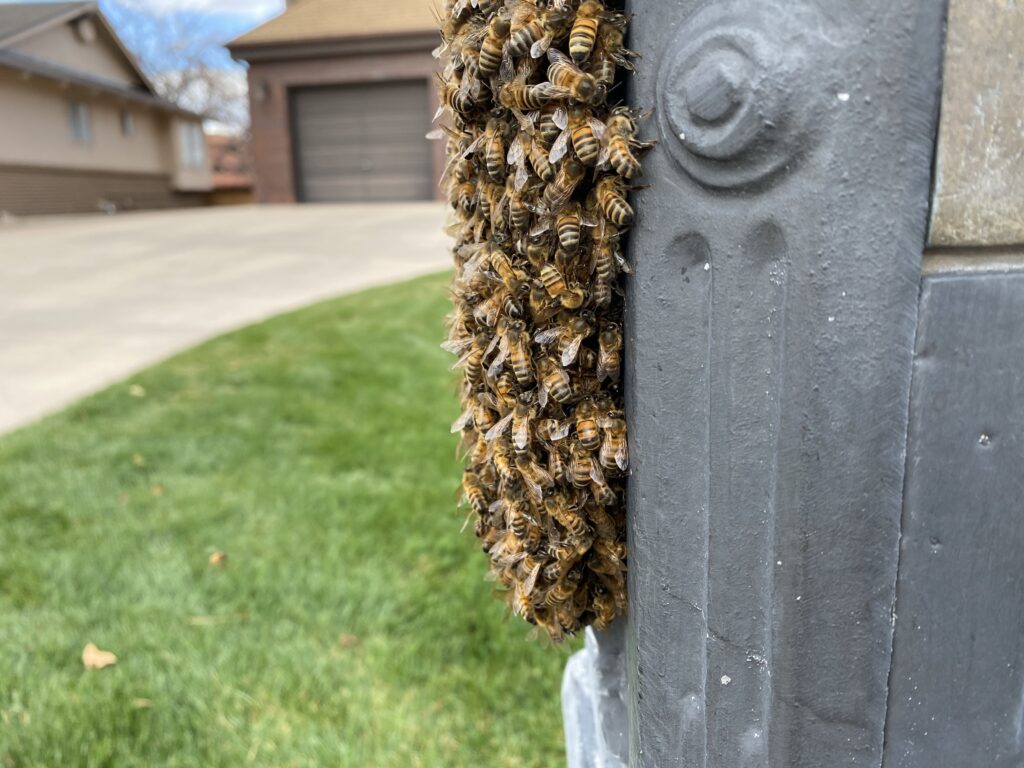 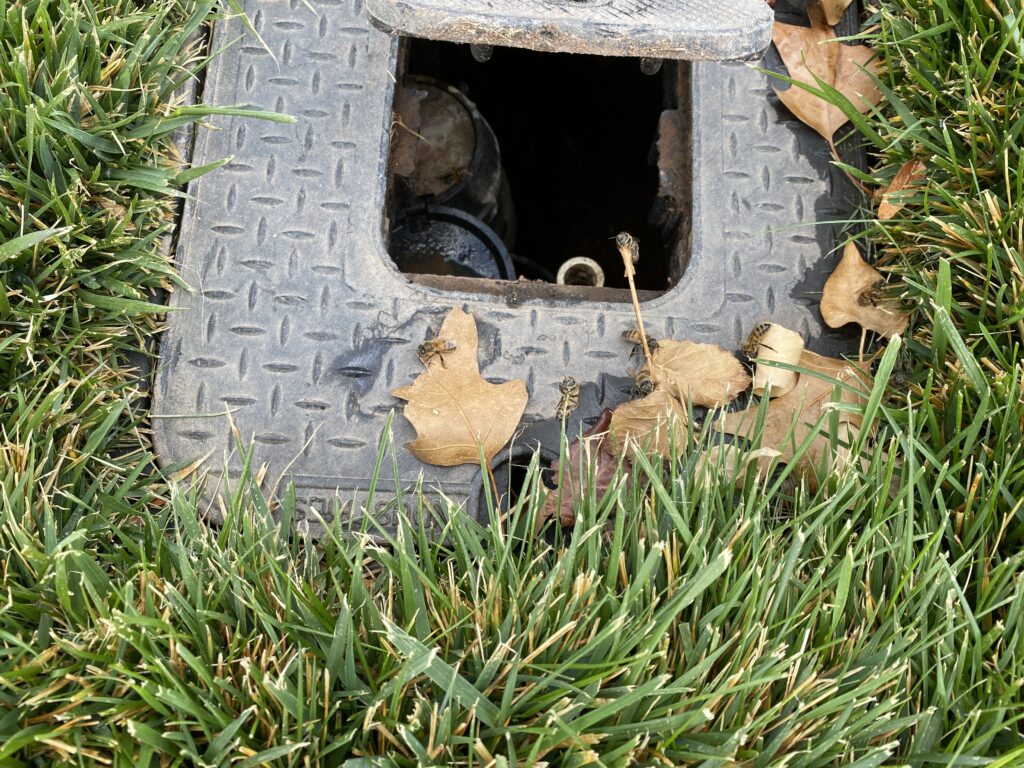 Some of the bees were drawn to the water in a nearby water meter, St. George, Utah, March 15, 2021 | Photo by Ammon Teare, St. George News 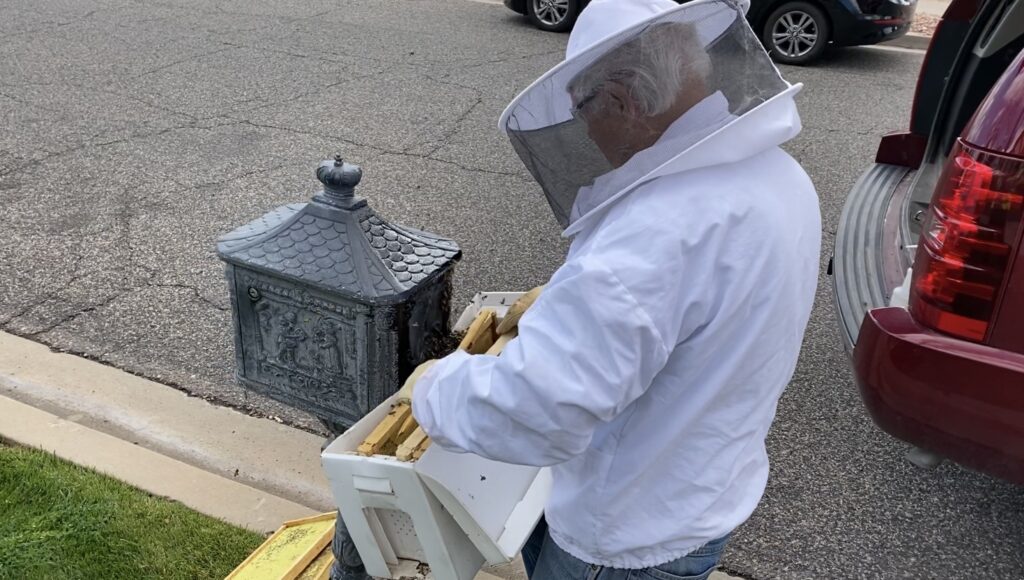 Jimmy Frisby brushes the swarm into a temporary hive so he can transport them to a new home, St. George, Utah, March 15, 2021 | Photo by Ammon Teare, St. George News 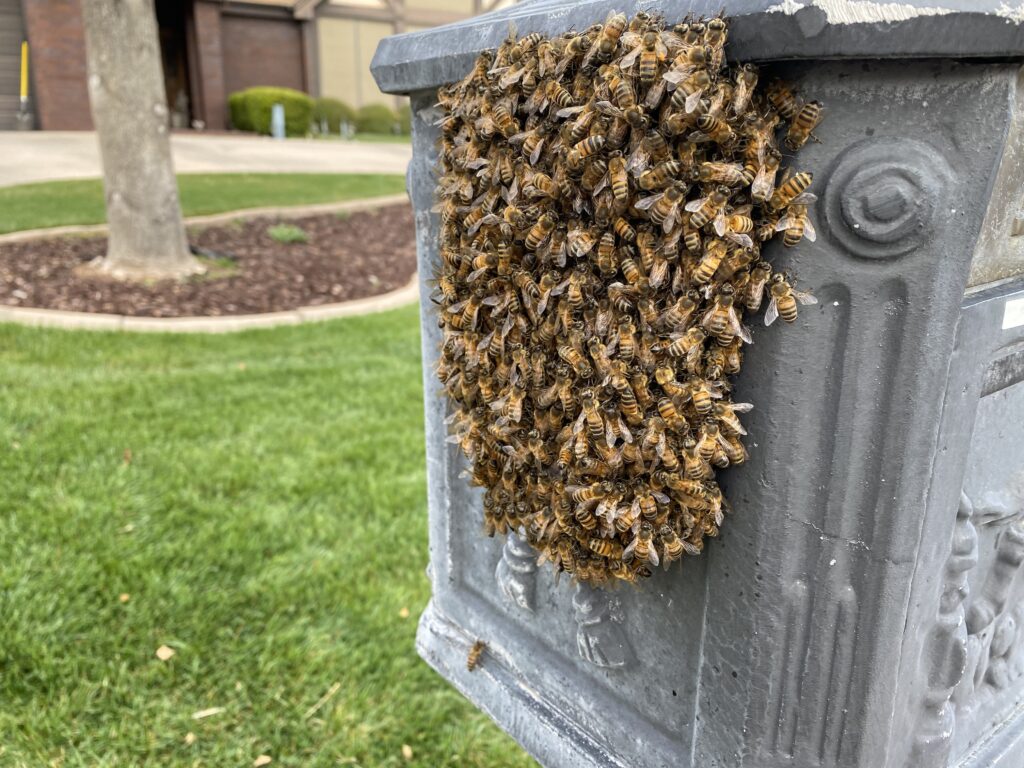 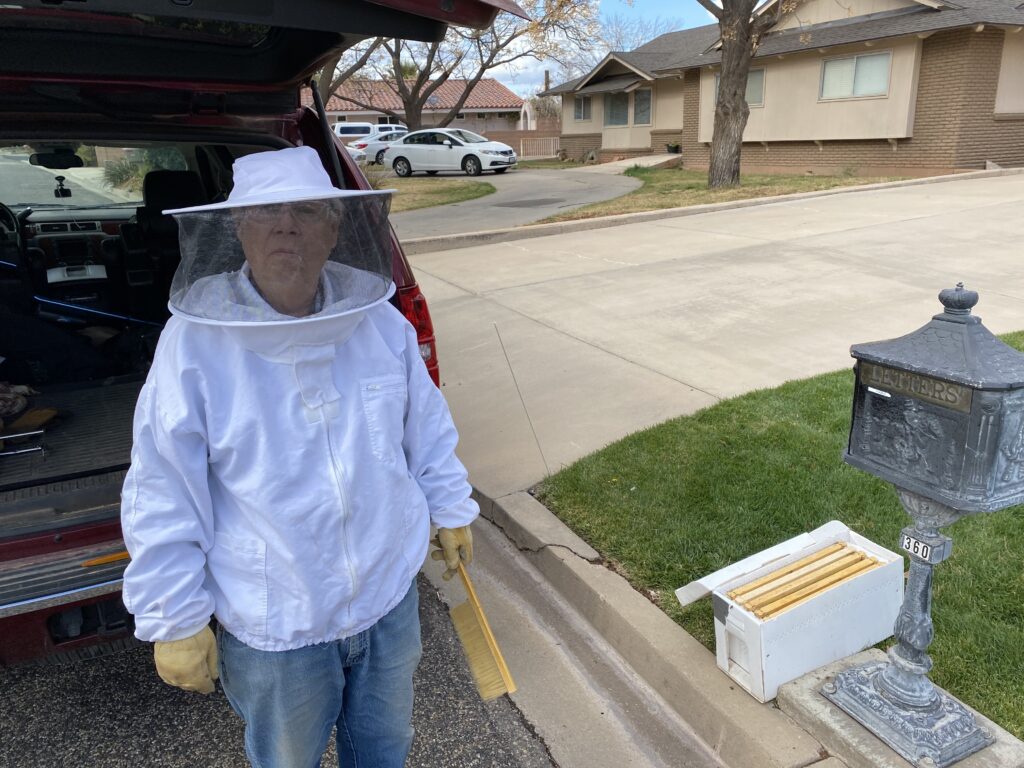 Beekeeper Jimmy Frisby waits for the last of the bees to make their way to their queen in the box, St. George, Utah, March 15, 2021 | Photo by Ammon Teare, St. George News

Don't be alarmed. Those swarming bees are a sign of spring, and it's necessary for survival