ST. GEORGE — As part of a two-week road trip through Utah, Ammon Bundy, his family members and individuals in the People’s Rights Network gathered at the Red Lion Hotel in St. George to discuss local efforts to resist mask mandates and to hear Bundy share his vision for government in the United States.

Bundy talked at length about the First Amendment during the meeting on Wednesday evening, paying particular attention to the rights of assembly, speech and press. He said that gathering restrictions and mask mandates are a form of suppression of speech and assembly.

“Maybe we can’t trust the (pandemic) numbers that are being portrayed, but it really does not matter because even if there were nine out of 10 people that were dying of this terrible virus, or whatever it might be, it still does not give another person the right to infringe upon an individual’s rights,” Bundy said. “The most dangerous thing about wearing a mask is you’re sending the message that someone else has control over your body.”

In a radio interview earlier that day, Bundy said that it would go against his conscience to wear a mask because he’d be participating in a lie. At the meeting, attendees cheered frequently when Bundy would talk about his personal convictions against masks and when he questioned the legitimacy of the COVID-19 pandemic.

Members of the audience voiced their skepticism about the severity of the COVID-19 pandemic, with some mentioning the false claim that the virus causing COVID-19 has never been isolated. This has been debunked by multiple sources, including the World Health Organization and the Centers for Disease Control.

The bulk of Wednesday’s meeting was devoted to Bundy’s philosophy on proper governance, which included criticisms of the state governments’ response to the pandemic and the perceived government overreach in enacting emergency powers.

“When you’re in a state of emergency by the governor, you’re in a totalitarian state or dictatorship,” Bundy said. “No longer is it a representative government, it’s where one man is basically controlling (all of) it. I’m not name calling, but our governors literally became tyrants.”

Bundy recently clashed with government officials in Idaho, his current state of residence. He recounted his experience at the Idaho State Capital in August 2020, when he entered the Capitol along with a crowd of mask-less protestors, some of which were armed.

Over the course of the next two days, Bundy would be arrested twice and charged with misdemeanor trespassing and resisting and obstructing officers. His trial is scheduled for March 15.

Bundy said he was acting as a member of the press when he was detained and made no mention of the reports that he was asked to leave before he was arrested. He said his intent was to participate as a member of the public and to bring attention to the unlawful and extreme powers of the state executive branch during the COVID-19 pandemic response.

In attendance at Wednesday’s meeting were members of the Bundy family, including Ammon Bundy’s father, Cliven Bundy, his brother Ryan Bundy and other members of his immediate and extended family.

Ryan Bundy stood several times during the meeting to address the gathered crowd. He reiterated many of Ammon Bundy’s claims about the Constitution and said that one should be willing to lay down one’s life in protest to be worthy of freedom.

After the meeting, Dorian Bundy, a cousin of Ammon Bundy and St. George resident, said whenever he sees an an infringement upon his rights, he does not comply.

“Stop obeying unconstitutional laws. Stop complying with mandates and emergency powers that do not exist. Governments exist to protect our rights,” he said. “I’m not anti-government, but if we don’t stand up for our rights, and defend them for ourselves and our friends and our neighbors, we’ll lose them. And once they’re lost, there’s only one way to get them back.”

Wednesday’s event was organized by the People’s Rights Network, an organization created by Ammon Bundy to gather like-minded citizens to respond when their members feel threatened or persecuted.

Human rights organizations have described the group as “a dangerous new network of militia members, anti-maskers, conspiracists, preppers, anti-vaxxers, and others.” However, its members, including many Washington and Iron County citizens, regard the group as a collection of freedom fighters and patriots.

Raul Hevia, a Washington County resident, came to Utah almost one year ago after helping to establish the Florida chapter of the People’s Rights Network.

“I was living in Florida when COVID(-19) hit, and they closed everything and shut down all the businesses,” Hevia said. “We were getting killed, I mean, police were arresting my friends for trespassing on the beach, everybody was locked up in their houses, and I knew that they were destroying the economy with that. This was about putting people into submission.”

He said he called Ammon Bundy because he knew he was doing something in Idaho with the network and wanted to do the same in Florida.

Area 10 of the People’s Rights Network currently includes Washington, Iron and Beaver counties, with five area assistants coordinating local activities. Hevia said they have plans to split the area due to increasing membership. Bundy said he plans to visit Kanab, Roosevelt and Grand Junction in the coming days to complete his speaking tour.

Bundy said the organization now has more than 405 areas established, with three to five area assistants assigned to gather contact information and share updates and calls to action with area members. State assistants, like Hevia, coordinate between areas and help oversee the group’s efforts on a larger scale.

Some in attendance came out of interest or by invitation from other conservative political action groups. Some local groups, like the Liberty Action Coalition, took time at the meeting’s opening to announce other events and share updates. Two individuals in attendance shared their negative experiences with mask mandates, including one man who said he was denied entry into a local Harmons’ store and was ultimately barred from returning.

Michelle Brazier, who was attending the meeting at the invitation of the Bundy family, said that freedom and liberties are being taken away and will be lost if people don’t stand up for them.

“The reason that the Founding Fathers put things into place the way they did is because they saw things happen when it was run differently – the oppression that people experienced under rule,” she added. “And it was frightening.”

Bundy first entered the national spotlight in 2014, when a conflict between his family ranch in Bunkerville, Nevada, and the Bureau of Land Management escalated into an armed standoff. Federal officers surrounded the ranch and began rounding up the Bundy’s cattle – which were grazing on public land – until members of armed citizen militias arrived along with local supporters to drive out the law enforcement.

The Bundy family’s notoriety grew when, in 2016, Ammon Bundy and his brother Ryan Bundy led their own militia group to take over government buildings on the Malheur National Wildlife Refuge in Oregon. The militia occupied the reserve for 41 days, resulting in yet another standoff with federal officials that ended when Ammon and Ryan Bundy were arrested along with other militia leaders.

Ammon Bundy would spend the better part of the next two years incarcerated as he was tried for both the 2014 standoff and the 2016 incident. He and his family members were acquitted for the 2014 standoff when the federal judge declared a mistrial, explaining that federal prosecutors had acted with willful disregard for constitutional due process rights. Bundy was found not guilty on all counts with regards to the 2016 case.

Regardless of the outcome of court cases past or present, Bundy’s following continues to grow as he finds individuals that resonate with his message. In Southern Utah, where some locals who are now members of the People’s Rights Network participated in the 2014 standoff near Bunkerville, Bundy has found an audience with those who seek to limit government intervention and champion individual liberty at any cost. 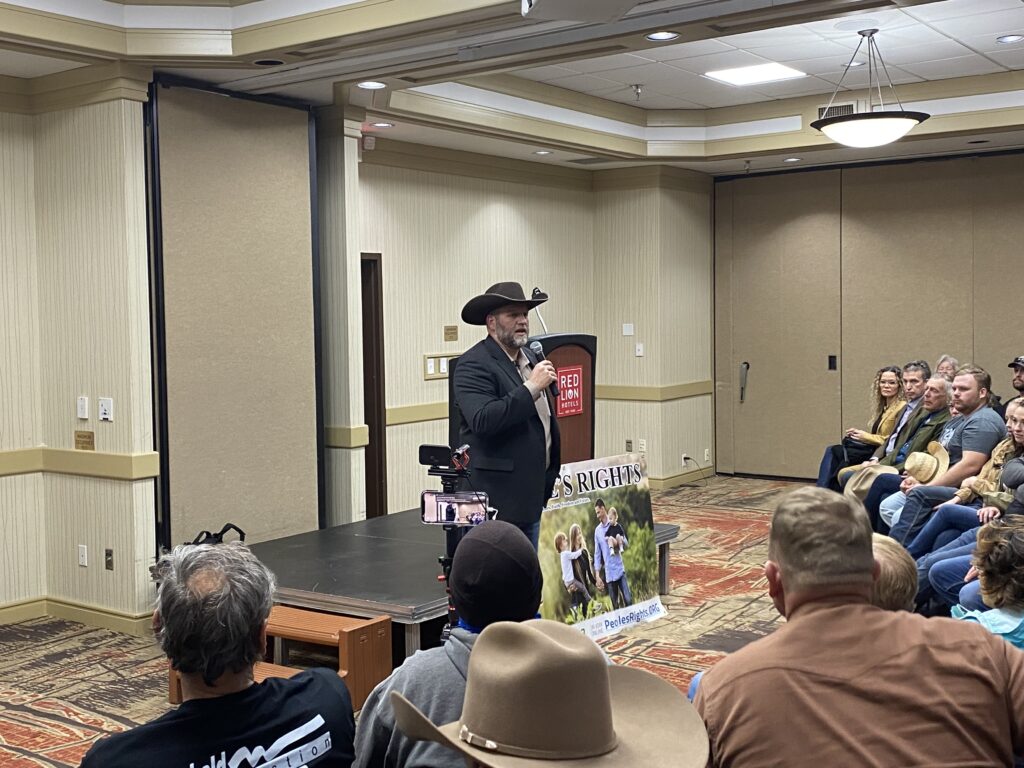 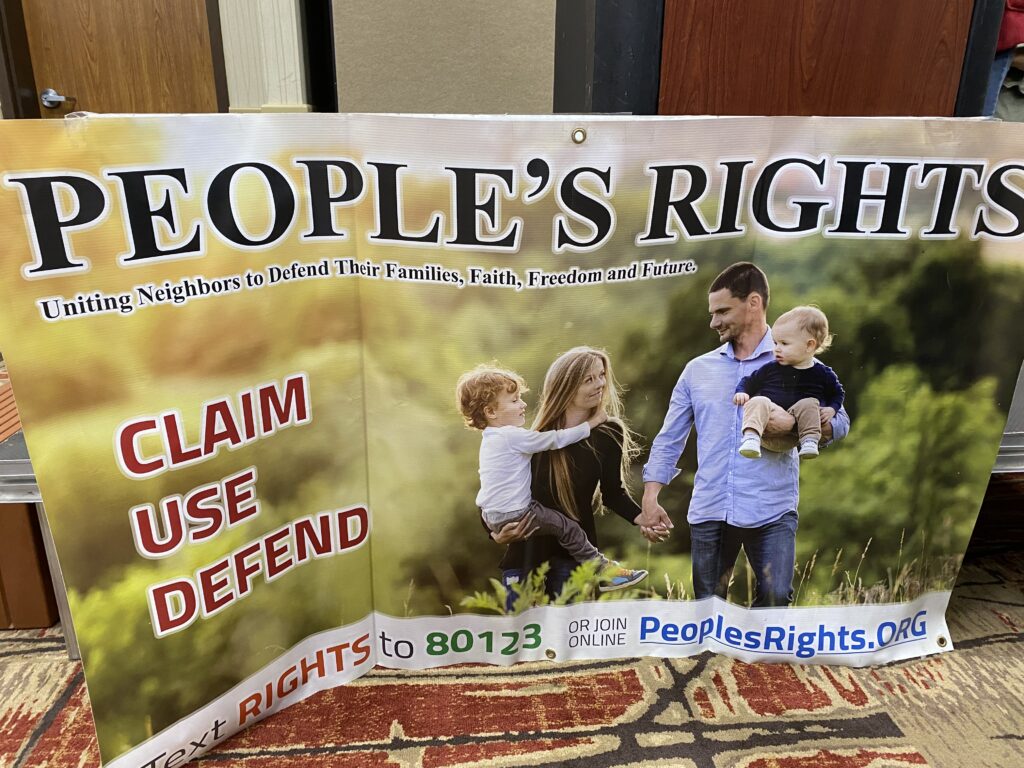 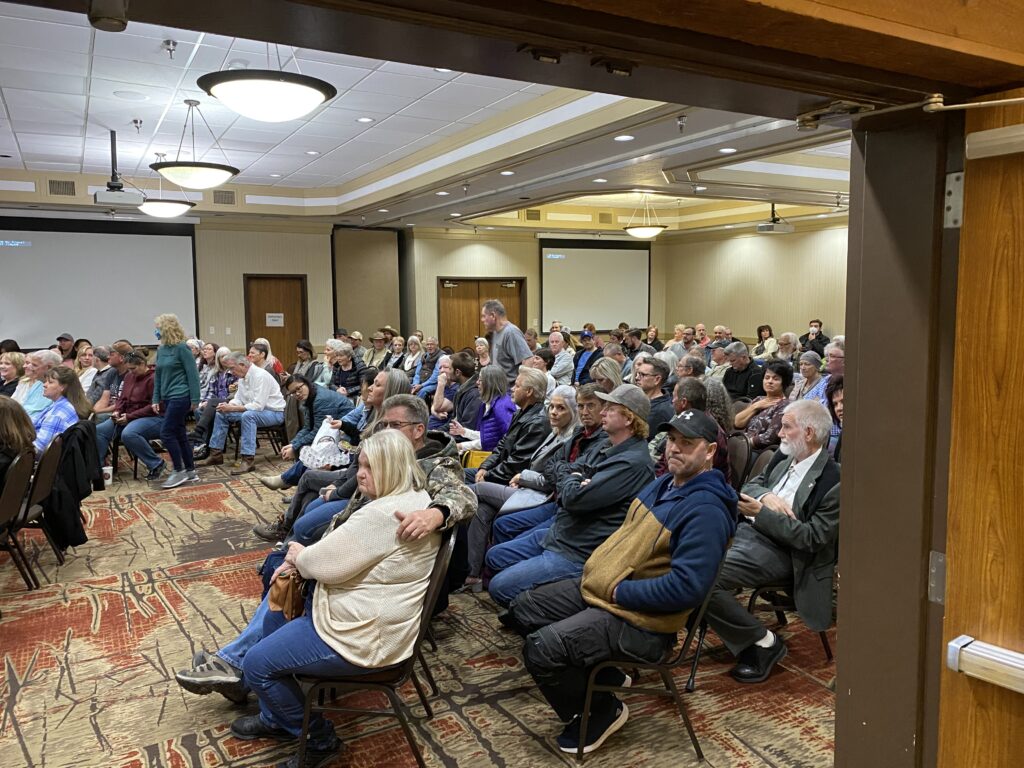 Citizens of St. George and the surrounding region, along with interested visitors and members of the Bundy Family gathered in a conference room in the Red Lion Hotel, St. George, Utah, March 10, 2021 | Photo by Ammon Teare, St. George News 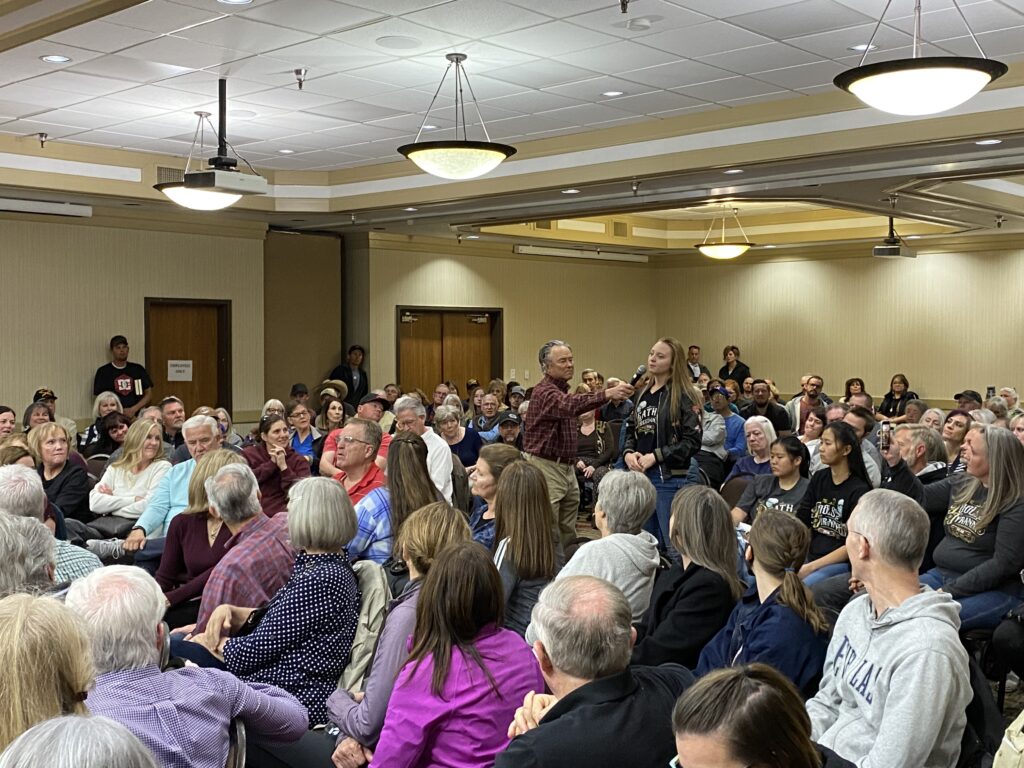 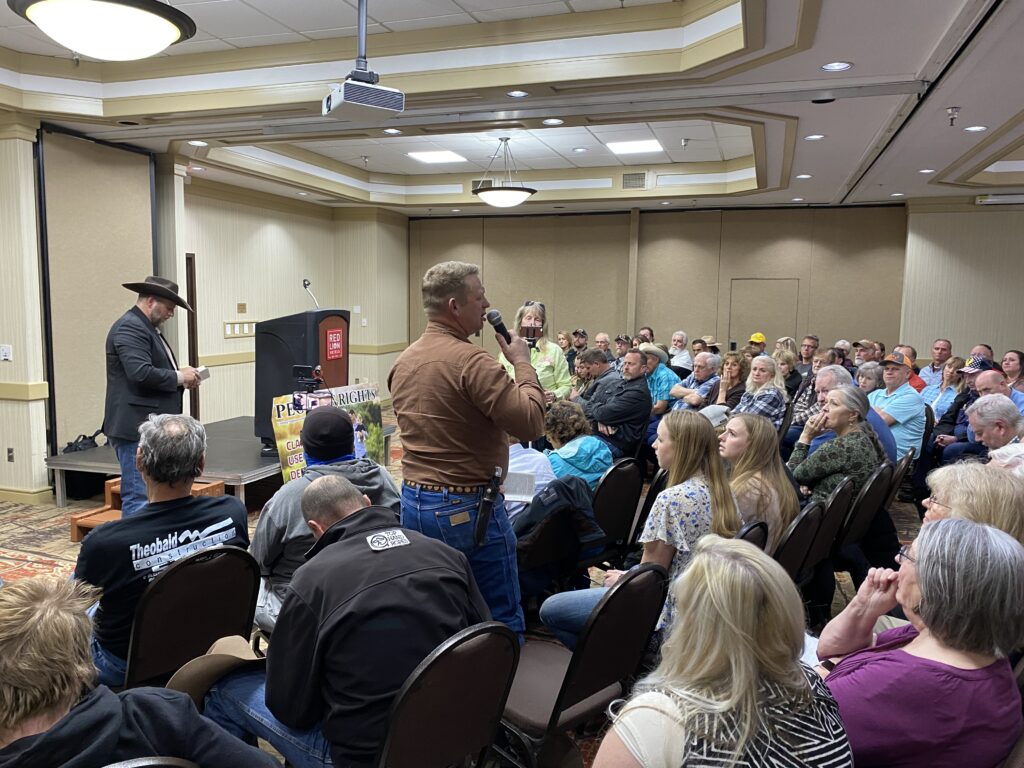 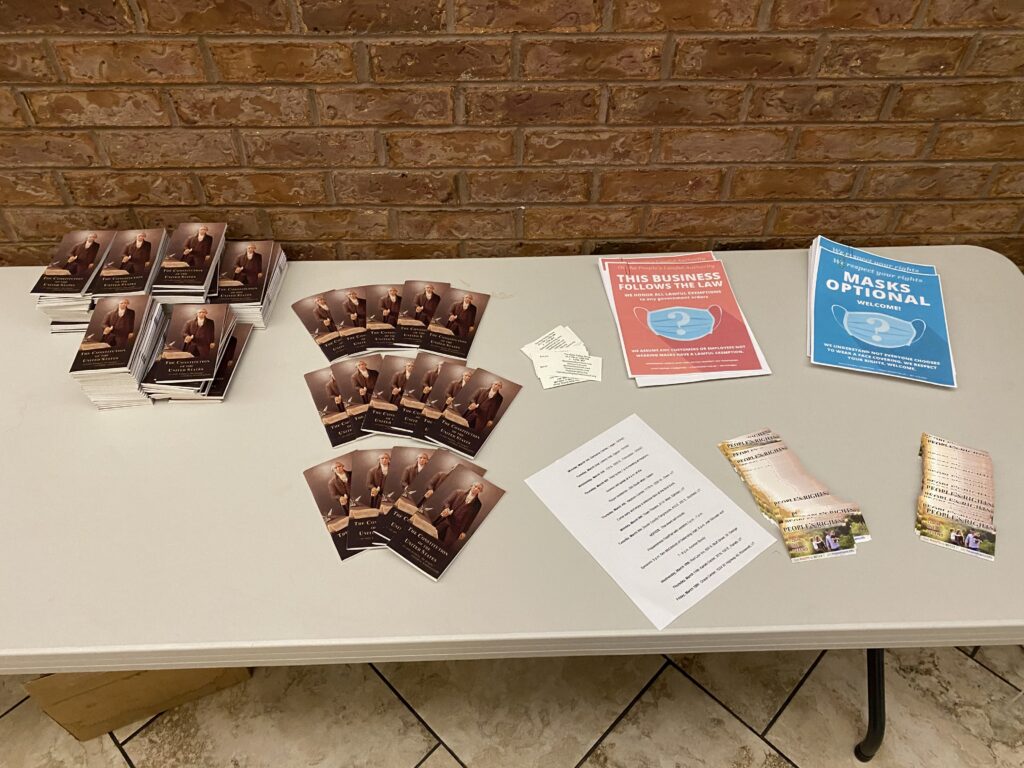 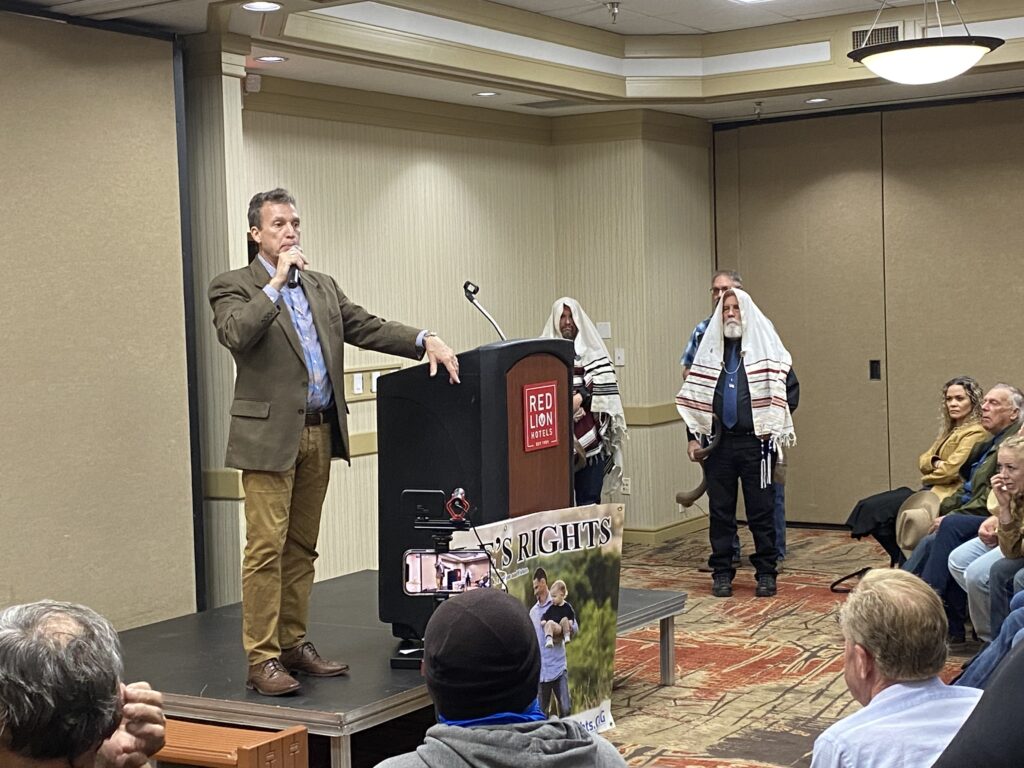 Raul Hevia, a state assistant in the People's Rights Network, addresses the group at the end of the meeting, St. George, Utah, March 10, 2021 | Photo by Ammon Teare, St. George News 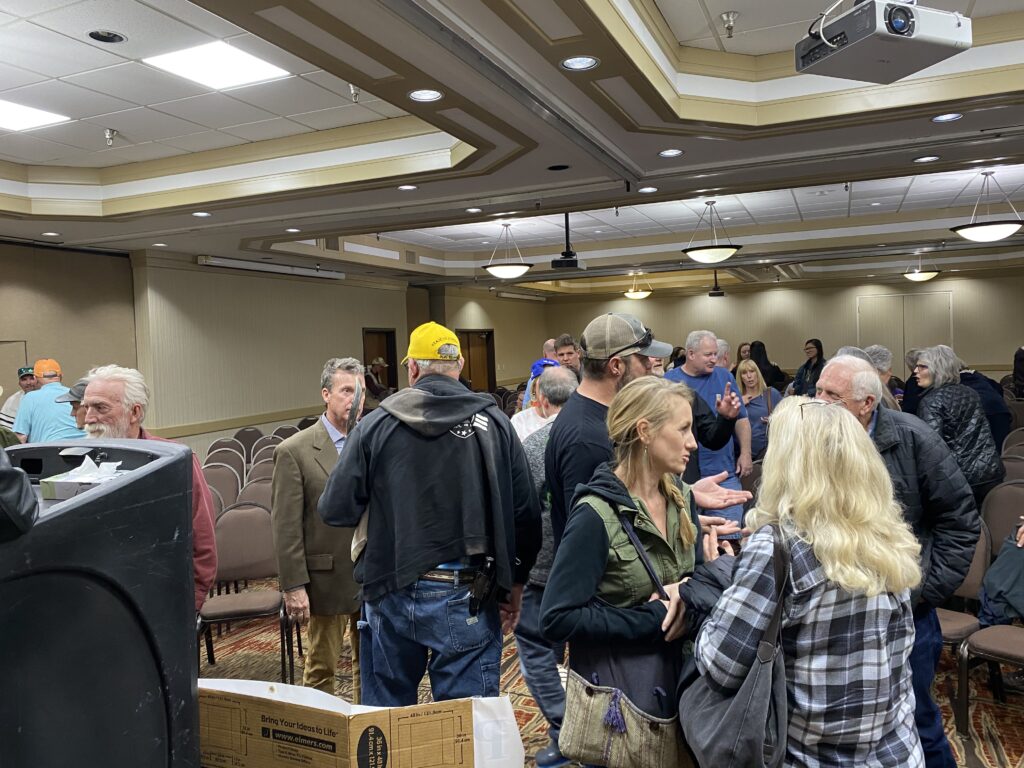 After the meeting, the attendees, most of which were not wearing masks, mingled in the conference room and in the hall outside, St. George, Utah, March 10, 2021 | Photo by Ammon Teare, St. George News 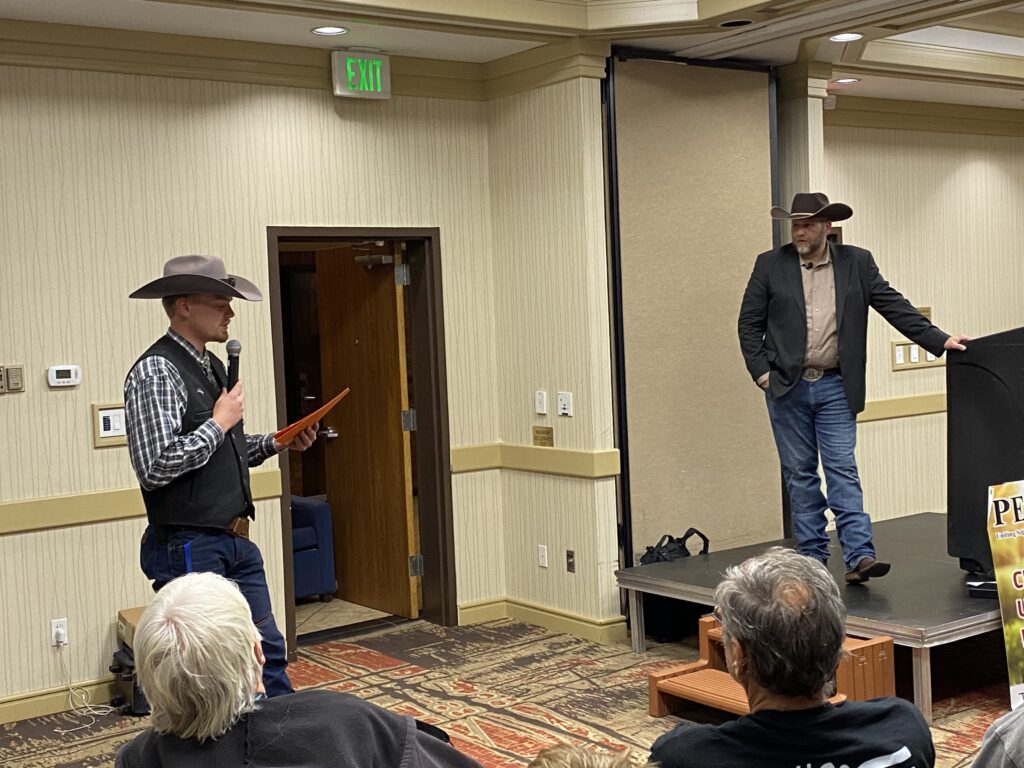 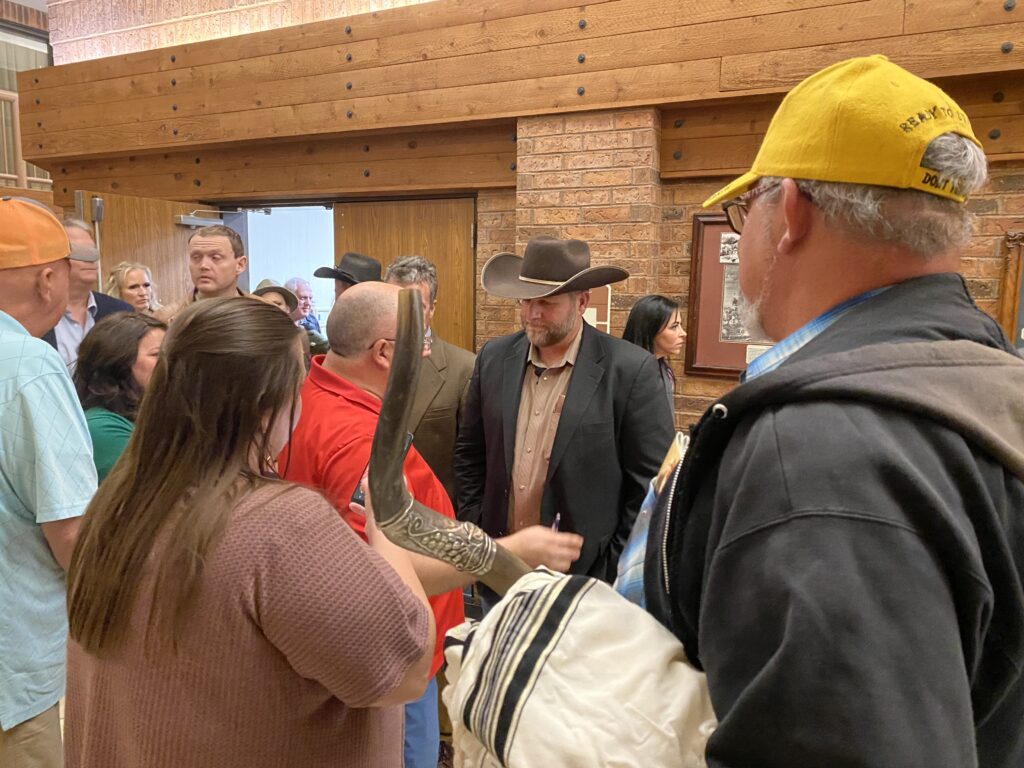 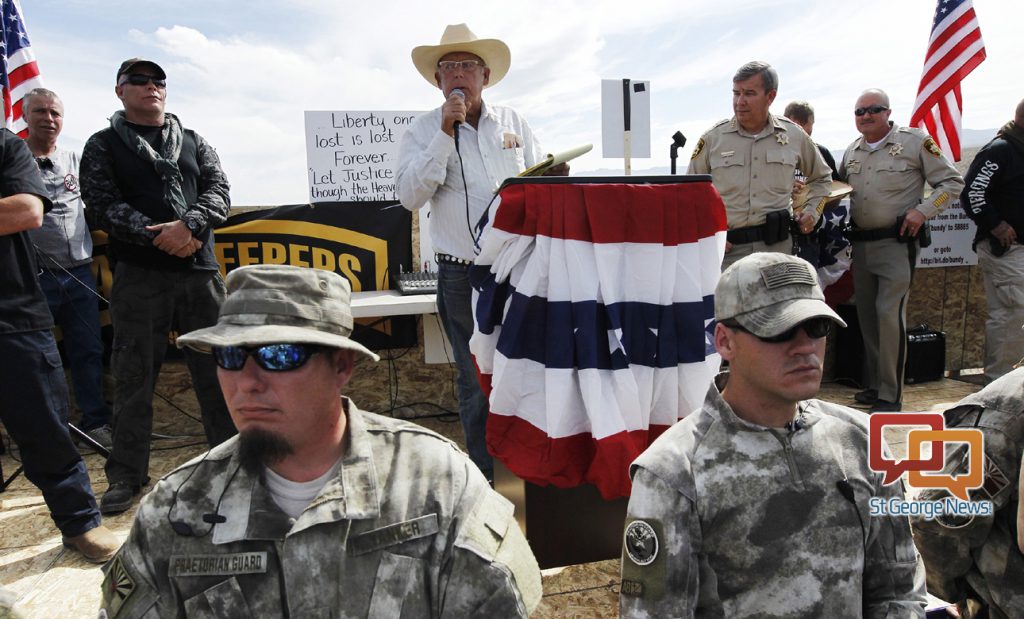 In this April 12, 2014, file photo rancher Cliven Bundy, top center, addresses his supporters alongside Clark County Sheriff Doug Gillespie, right, while being guarded by self-described militia members in the foreground. Twice federal prosecutors in Las Vegas have failed to win full convictions of men who had guns during an April 2014 armed standoff with government agents trying to round up cattle belonging to Nevada rancher Cliven Bundy. | Photo by Jason Bean/Las Vegas Review-Journal via The Associated Press, St. George News