MESQUITE — It is an unmistakable sight for any American. The heads of Mount Rushmore, with the faces of four American presidents looking down upon… Lower Flat Top Drive in Mesquite, Nevada.

This Mount Rushmore, with heads just a little larger than the typical human head, does not come close to matching the size of the monument in South Dakota, where George Washington’s nose alone is 20 feet tall. And the soft packed sandstone will not have the durability of the real monument’s Black Hills granite.

But that hasn’t stopped onlookers from stopping on the road leading from Pioneer Boulevard to the Sun City retirement community to get a good look at the creation of a 75-year-old retiree.

Pete Karns has been spending 40 hours, three or four days each week over the last few weeks on the project and as of Friday expected to spend about 10 hours more as he was putting the finishing touches on the familiar faces of George Washington, Thomas Jefferson, Theodore Roosevelt and Abraham Lincoln.

Karns isn’t an artist and is quick to admit his representation isn’t exact. “Washington looks like he has a smirk,” Karns said as he climbed his ladder, with water in an old Windex bottle to help pack the sand more. “This is just a hobby, and I’m just doing it for the fun of it.”

The Mount Rushmore recreation is actually Karns’ 17th sandstone creation on Lower Flat Top Drive. The other creations range from the insignias of Las Vegas’ Golden Knights and Raiders sports teams to smiley face emojis. Rushmore is the first time Karns is doing a three-dimensional sculpture, rather than the etchings into the sandstone he has done in the past.

“This one is … way more involved and complicated and it was a challenge to see if I could do it,” Karns said. “I work off of photographs. I got online and found a lot of pictures of Mount Rushmore in different angles and trying to get the dimensions right. The look at the faces up there, they’re a long ways from real-life replicas, but people know what I’m trying to do.”

The 12-year resident of Mesquite first got the idea when he saw the road being built a few years ago, with the construction crews carving it out and leaving the sandstone bluffs.

“When the bulldozers built this road, they left these sandstone, sandy surfaces that one day I just kind of checked it out and gosh, it’s hard enough that it’s soft enough to carve and yet hard enough to hold its form after it gets shaped. So, I just started,” Karns said. “I’ve been doing it for three years now.”

Its location is not necessarily easy to find. It can be seen on the right side driving up Lower Flat Top Drive from Pioneer, just past the curve after the Foothills Trailhead parking area. Karns’ other sandstone works can be seen along the right side of the road further up.

But if Friday afternoon was typical, there is something everyone who stops to look at Karns’ work has in common: The smile.

And for Karns, that’s the whole point.

“I know I just come out here and it’s nice that I can put a smile on people’s faces,” Karns said. “It makes me happy that people enjoy what I’m doing. With COVID going on and problems around the world, it’s nice to stop and smile once in a while.

As people stop to watch the man in the cap carving out Mount Rushmore alongside the road in Mesquite, few, if any, probably realize the man they’re watching is a former Olympian who is enshrined in at least four sports halls of fame.

The native of Jackson Hole, Wyoming, ended up at the University of Utah where in the 1960s he became a collegiate skiing champion in the slalom, giant slalom and cross-country.

But it was after college that he became an Olympian in the winter discipline of biathlon – which combines target shooting with cross-country skiing.

Karns was the U.S. national biathlon champion in 1970 and 1972, which helped earn him a place on Team USA at the 1972 Winter Olympics in Sapporo, Japan. At those games, Karns finished 14th in the 20K individual sprint which remained the best-ever American individual biathlon finish in the Olympics until 2010. He was also part of a USA relay team that finished sixth – a finish that has only been equaled by the 2018 U.S. Olympic team.

The Olympic movement for Karns didn’t end there. He was the U.S. national biathlon team coach from 1973 to traveling to leading the USA at the 1976 Winter Olympics in Innsbruck, Austria.

He also served on the U.S. Olympic Committee, was a lead biathlon official at the 2010 Salt Lake City Olympics and has made a point of attending all of the Olympic Games since the one he attended as a competitor.

Karns just shrugs when asked about the accomplishments that has him enshrined in the U.S. Biathlon Hall of Fame, the Intermountain Skiing Hall of Fame, the University of Utah Crimson Club athletics hall of fame and the Jackson Hole Ski Hall of Fame.

And even in retirement, Karns hasn’t lost many steps. Before going out to his Mount Rushmore, Karns did a 35-mile bike ride Friday morning and still regularly takes to the slopes.

“I’m a man of many hats,” says the self-proclaimed snowbird who splits his time living in Mesquite and his native Wyoming.

While patriotic, Karns said there is no political message behind his Mount Rushmore.

There won’t be any additional presidents added. This is purely Washington, Jefferson, Roosevelt and Lincoln.

“From day one, I said, ‘No politics, no messages, no negative images.’”

Karn’s creation, despite being made of soft sandstone, might also be more durable than people think. Mesquite doesn’t exactly face a lot of torrential storms and his other creations farther up the road that are months and even years old are still evident.

And though Karns is indifferent about his Mount Rushmore lasting months or even days, he still fears one thing bringing it down – It’s not dreary weather, but dreary humans.

“I don’t have expectations of how long it will last,” he said. “Probably the biggest fear is vandalism.”

And that is something Karns has already had to deal with.

Last Wednesday, Karns said someone decided to use Washington’s face for target practice by throwing rocks at it. Karns spent part of the week repairing it.

“It was disappointing,” Karns said, “but for most people, 99 out of a hundred, they see happiness and artwork and positive things.” 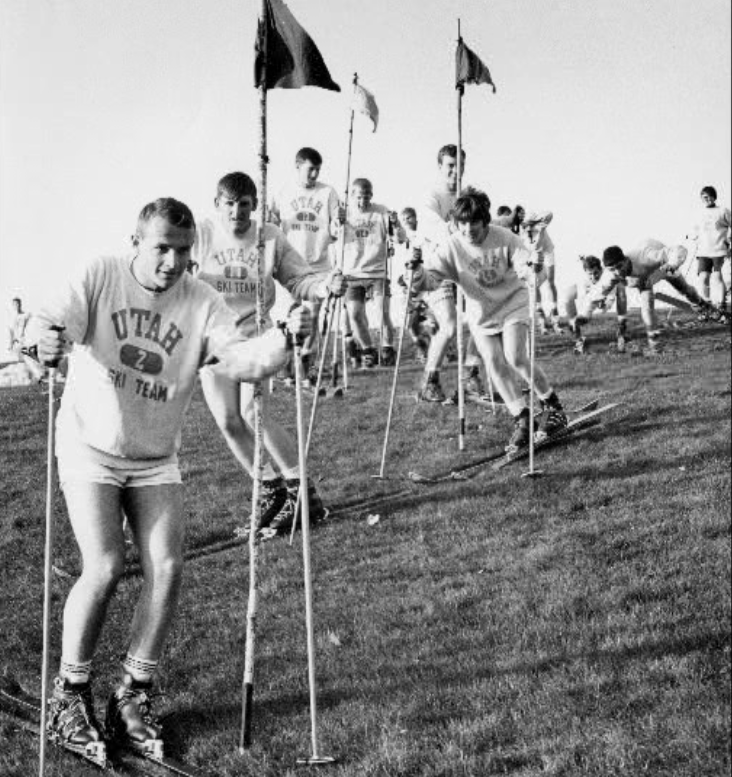 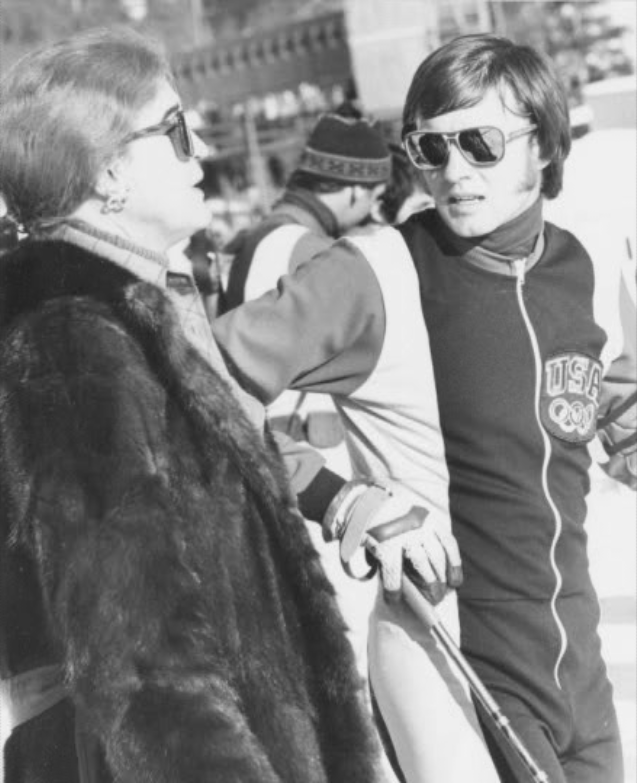 A group of emojis previously carved by Pete Karns is seen in the foreground as he continues work on his Mount Rushmore replica in the distance along Lower Flat Top Drive in Mesquite, Nevada. Feb. 26, 2021. | Photo by Chris Reed

A group of emojis is among some of Pete Karns' previous creations along Lower Flat Top Drive in Mesquite, Nevada. Feb. 26, 2021. | Photo by Chris Reed 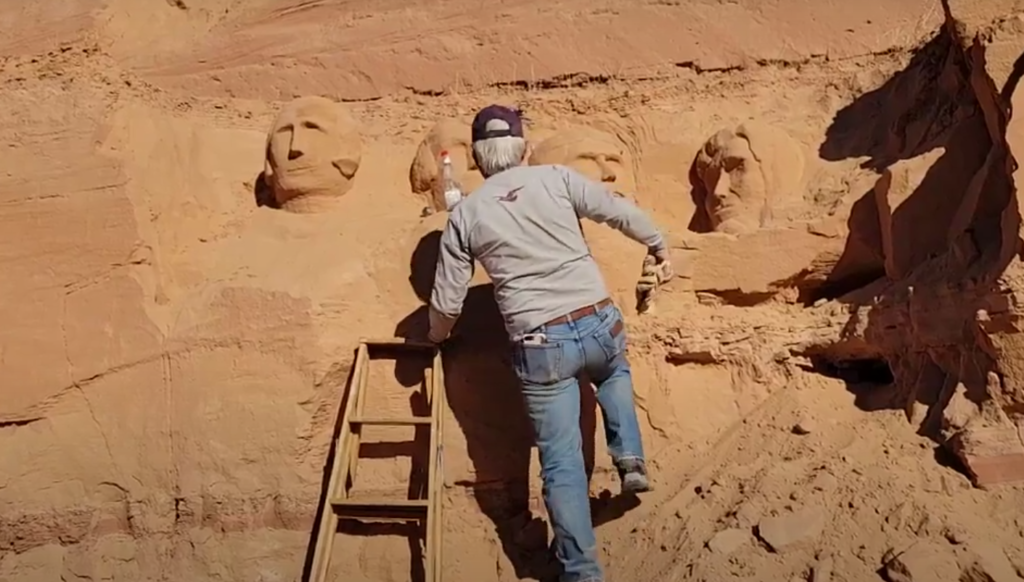 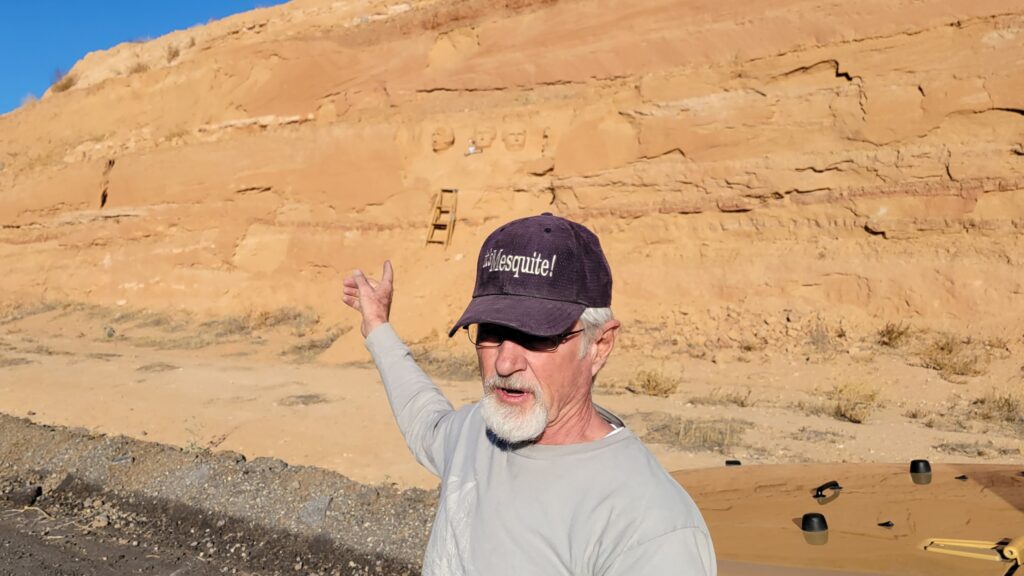 Pete Karns points out the Mount Rushmore replica he carved into sandstone near the Sun City retirement community in Mesquite, Nevada. Feb. 26, 2021. | Photo by Chris Reed 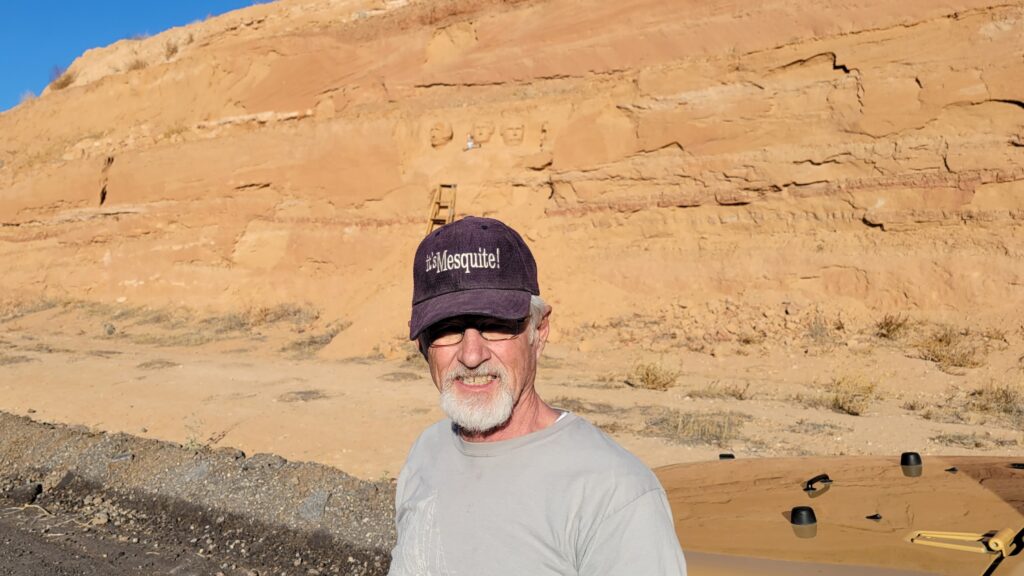 Pete Karns stands in front of the Mount Rushmore replica he carved into sandstone near the Sun City retirement community in Mesquite, Nevada. Feb. 26, 2021. | Photo by Chris Reed

Chris Reed serves as an editor and reporter for St. George News. He has steadily moved east after growing up among the Valley girls of Southern California’s San Fernando Valley. He graduated from Cal State Northridge before spending a decade in Las Vegas. As a sports reporter and editor, he once compared shoe sizes with Shaq. As a news reporter and editor, he has covered parades, triumphs and tragedies. He also once got close to the stars doing publicity for a space module builder. He came to St. George for love and has grown to love the community. He is the proud father of two boys, his youngest a champion against both autism and Type 1 diabetes.

Mesquite tunes up for the Super Run car show; over 700 classic and custom vehicles on display

Officials respond to frustrations about I-15 construction toward Las Vegas