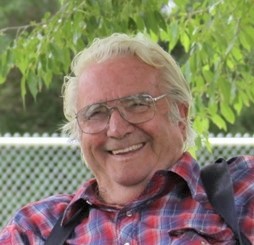 Garry was born November 1, 1935 to Harold and LaRue Connell Prisbrey. He was born in a little adobe home in Washington Utah, just a block from where he raised his family. He passed away Feb. 7, 2021 at his home.

He grew up mostly in Washington, Utah but lived in Imperial, California and Lyman, Wyoming for a short period of time when he was a toddler. He talked a lot about growing up in Washington. As a young boy, he would work on the farm with his dad during the summer. He would ride horse back down to the farm and spend all day. Lunch would consist of a slice of bread with jam or jelly. The days were long, hot, and exhausting. He took his baths in a #3 wash tub. As a teenager, Garry and his buddies would hitch a ride to St. George. Back in those days, the road went from Washington through Middleton and up through the tunnel. They would start out walking and then jump on the back of a truck as it went by.

In 1950, Garry moved to Las Vegas to work at the Desert Inn where he helped in the construction of the golf course. After the golf course was built, he stayed on as a gardener and groundskeeper. In 1955, he met Gwen Kern at a 1950’s drive-in, just like we saw in the show “Happy Days.” The waitresses were taking orders and serving food wearing roller skates. There’s a little variation in how they met. She told the story one way and Garry told it another. But one thing’s for sure, he was driving a classic 1952 Chevy Coupe with “loud pipes.” He loved his cars, and he loved them “loud.” He always had a nice car and later in life, he always had an antique car or two in the garage.

About 1955 or 1956 he joined the Plumbers and Pipe Fitters Local Union 525. He was the first apprentice to join the 525. He made lifelong friends with the men he apprenticed under and the men who apprenticed under him. They were always playing jokes and pranks on each other. Someone was hassling him about getting the toilets set in a hotel they were working on. There were no complete walls or floors, just scaffolding and minor floors, and Garry hug a toilet on one of the upper floors. We have a picture and all you can see are pipes, a toilet, blue sky and Garry standing there grinning. Several years later, while working on the Laughlin powerhouse, he fell 40 feet and broke his back. George Nicewonder said, “Hey Pard, does this mean I get your lunch?” They worked hard, played hard and respected each other like nothing you have ever seen. As an elected officer, he helped write and establish the pension plan for the 525. He was very proud to be a part of this great organization.

Garry was very skilled, talented and kindhearted. He could weld, plumb, lay brick, pour cement, run electrical wire, fix automobiles, garden, raise sheep and cows, bake bread, cook, hunt, cut and polish rocks and the list goes on and on. He loved to restore old cars and create beautiful, handcrafted silver jewelry. I personally believe he could fix just about anything, a skill he passed down to his sons, grandsons and “anyone” who wanted to learn how, and he taught “us” by example. Rolling up his sleeves and doing whatever it was, with us. He freely gave of himself to help others. He would give you the shirt off his back and food out of his cupboard if you needed it.

Out of all the gifts and talents he possessed, I believe he would say his greatest treasure was his family. All of his family, from grandparents, parents, aunts, uncles, and cousins, to his wife, children, grandchildren and great-grandchildren. In 1970, he moved his family back to Washington, Utah from Las Vegas. He built their home next door to his grandmother, Susan Prisbrey. He looked after and cared for his mother and grandmother until their passing.

Garry broke his back about 40 years ago. He lived in constant pain for years, but he never complained. He worked clear up until he could retire. We would ask him how he was doing, and he would say, “Good as new.”

Two years ago, Gwen’s Alzheimer’s came on very strong. Garry was determined to take care of her himself. It wasn’t easy, but he did it. He took over the cooking, cleaning, the laundry and paying the bills.

Graveside services will be held on Saturday, Feb. 13, 2021, 2 p.m. at the Washington City cemetery for family and close Friends. Please social distance and wear a mask.