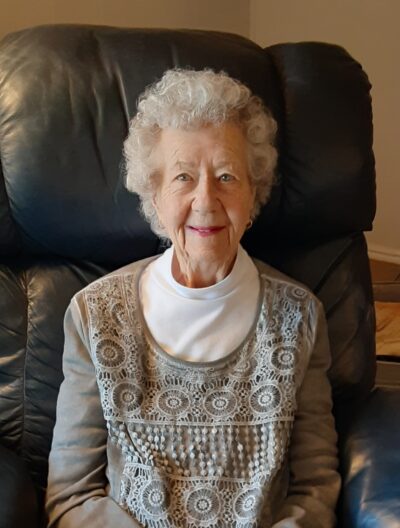 Louise Millett White left this earthly realm on Feb. 3, 2021 to return to her Heavenly Father.

Louise was born in Kanab, Utah to Ozro Lamar Millett and Inez Adams Millett on April 15, 1926. She was the eldest of four sisters: Louise, Ida, Glennis and Norda Millett. She and her sisters grew up in Kanab. Louise’s mother died when she was 16 years old.  It was during the Great Depression, so their father had to go to Salt Lake City to find work so he could financially support his daughters. As a result, grandmother Adams reared the sisters in Kanab. Those were very hard times because their grandmother also took in boarders, so the girls often had to sleep on the porch or the floor.

During Louise’s High School years, she was very studious, and she loved to be involved in drama and music. Louise earned a full scholarship to Brigham Young University. Because her mother had died, grandma Adams told Louise she could not go because she was needed at home. Two men from BYU came to see Louise and tried to convince her she needed to go to BYU. They spent a long time offering all kinds of incentives to get her to attend BYU but finally, her grandmother intervened and told the men that Louise could not go to BYU. Louise was broken hearted but she knew it was not possible.

Her grandmother said she could attend Dixie College in Saint George, Utah if she would come home on the weekends. At Dixie College Louise lived with an aunt and a cousin. She cleaned two of her aunts’ houses for room and board. She was involved in many dramatic plays and musical events. She was told that she was such a good actress that when she was in character, family and friends couldn’t even recognize her unless they knew the part she was playing. She attended one year at Dixie College.

Louise was set up on a blind date with Stanley Randolph White, Sr., a young man from Fredonia, Arizona and ended up marrying him on April 9, 1946. Stanley and Louise had four children: Linda Louise, Stanley Randolph Jr., Terrie Lee and Inez. Louise was a master homemaker. She was an incredible cook. She loved her flowers and vegetable garden. She kept an immaculate home. Her children’s friends often stopped by hoping to get homemade bread and cookies. She created a home that was warm and inviting for family and friends.

Stanley and Louise spent the first eight years of their married life in Kanab, Utah, living in the same house Louise’s parents owned. Later, they moved to Arizona and settled in Mesa. In 1984, Louise and Stanley retired back to Kanab, Utah where much of their extended family resided. They were called on a mission to Adam Ondi-Amon in Missouri for a service mission. They loved it! They returned home and got back to living a regular life. Then Stanley got cancer and died in February of 1993.

Louise was a widow for 28 years and now she is reunited with the love of her life for all eternity. She was surrounded by her children for all those years, and the last two and a half years she rotated living with two of her daughters. Her greatest treasure is her family. She adored her four children, her 24 grandchildren, and the 84 great grandchildren. She was loved by all. Louise White was an amazing mother that dedicated her life to caring for her husband, children, and home.

Louise served the Lord faithfully in many auxiliaries and as a member of the Relief Society. Her last calling was to choose the music for sacrament meeting and she never wanted to give it up.

Louise Millett White was preceded in death by her parents, her husband Stanley White, her sister Ida White, her sister Norda Lewis, a grandson Sheldon Lamar Douglass, another grandson Jesse Patrick Gribble, and many other extended family members. She is survived by her children: Linda Louise Gribble (Gerald Dennis Gribble), Stanley Randolph White Jr., Terrie Lee Cole (Michael Lee Cole), and Inez Douglass (Kent Don Douglass). Her children will miss her dearly because she was a wonderful mother.