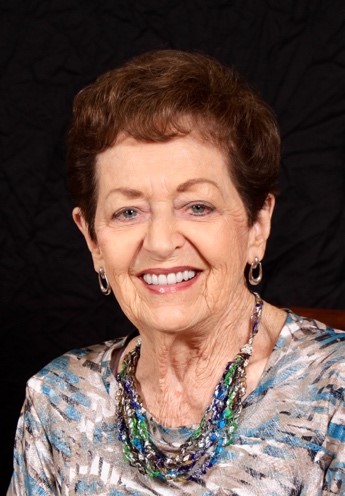 Dorothy had two older brothers, Paul Robert Gerhard and Lester Don Gerhard. She lived much like the pioneers of old. The 98-acre farm had no electricity, running water, indoor plumbing or any modern conveniences. She was 19 years old when the home was eventually modernized with electricity and running water. Her parents were hard-working, self-sufficient farmers who taught and lived the teachings of the Bible. A child of the Great Depression, she was taught to be frugal, practical, hard-working and self-sufficient.

Dorothy attended a small public school in the neighboring town of Bellbrook. Her first job at the age of 18 was as a secretary at Buckeye Tools, where she typed over 100 words per minute and mastered the lost art of shorthand. Her good looks earned her the role of “Betty Buckeye”, the attractive pin-up girl portrayed in company advertising and tradeshows.

Dorothy caught the eye of a 31-year-old engineer from Texas, George Edwin Steurer, who would leave a stick of gum on her desk as he walked by. They were married on Nov. 11, 1948. In three successive years, three young children were born: Dan, Marlene and Janet. In 1957 a fourth child, Nancy, joined the three-ring circus. The family moved to Southern California in 1955 and it was there in 1960 that they were introduced by their neighbors, the Dirksons, to the Church of Jesus Christ of Latter-day Saints. The church became a major influence in her life and she never tired of encouraging others to “come and see” for themselves. She and George served in many callings including a two-year mission to Ecuador.

Dorothy and George loved camping and would often load the kids in their Volkswagen van to pitch a tent and fish for trout in the small mountain streams. Dorothy was a loving and supportive wife and mother who gave her children firm direction as well as a long leash.

She was widowed twice, first at the age of 55 when George passed away in October of 1983. She was later married to Stan Eugene Nyquist of Mesa, Ariz., on November 11, 1987, and enjoyed nearly 20 more years of loving companionship until Stan passed in April 2007. In 2011, she sold her home in St. George to her grandson, Troy, and decided to move to the Beehive Cottages which was built by her son Dan. She lived there for more than nine years, occasionally asserting her role as “queen bee” when she felt she needed a little extra attention. She was a good  neighbor and had many wonderful friends.

Her numerous posterity totals 97, including in-laws, out-laws, and steps. In addition to her four children, she counts as her most prized possessions 18 grandchildren, 47 great grandchildren, and 3 great-great-grandchildren. She loved to receive photos and visits from family as she continued to make positive memories with her family until her final breath.

She is survived by her four children and their spouses: son, Dan Edwin Steurer (Miriam)  of St. George, Utah; daughter, Marlene Lois Allen (Russell D), of Palm Springs, Calif.; daughter, Janet Elaine Weese (Richard Michael) of The Villages, Fla., and daughter, Nancy Kay Wolf  (Robert Henry) of Toquerville, Utah. She will be greatly missed by her many adoring grandchildren, all of whom she considered to be wonderfully great.

The family wishes to thank the caring residents and staff of Beehive Cottages and Beehive Homes Assisted Living for their service to Dorothy during her senior years. Funeral services will be held at Metcalf Mortuary, 288 W. St. George Blvd., St. George,  Utah, on Saturday, Feb. 6, 2021 at 1:00 p.m., where a visitation will be held from 11:30-12:30 p.m., prior to services. Interment will be in the Tonaquint Cemetery.

Masks are required for those attending services.

Obituaries are received from the public and are not the product of St. George News, its editors, staff or contributors. The matters stated and opinions included are the responsibility of the person submitting them. Obituaries may be submitted for consideration to St. George News via email to [email protected].com.