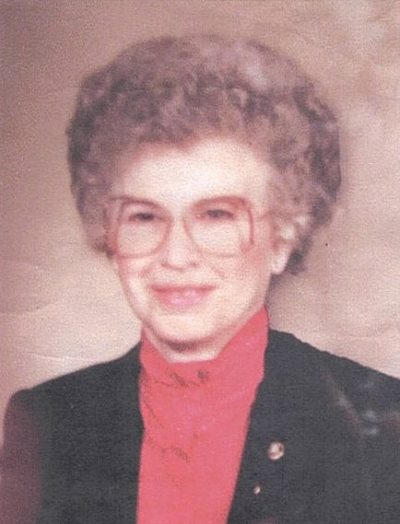 In the early morning hours of Jan. 8, 2021, Magdalena Gieszler Flaherty at the age of 95 passed into the loving arms of her Heavenly Father. She was surrounded by her daughter, son-in-law, grandchildren and great-grandchildren who will sincerely miss her wonderful charm, fun personality, great sense of humor, interesting stories and, most of all, just spending time loving on her. She was a great lady with great taste and impeccable style.

Lena was born on Nov. 7, 1925, to Jacob Gieszler and Christina Klett Gieszler, in Ashley, North Dakota, where she spent the early years of her life. In 1942, she moved to Jamestown, North Dakota, where she worked in various restaurants and at the state hospital. There she met the love of her life, Donald Lester Flaherty. They were married in Jamestown on July 22, 1946. A veteran of WWII and Korea, Don left the Army after serving 14 years, Don and Lena began a new life in Lodi, California, where Lena enjoyed homemaking, flower arranging, home decorating, painting, gardening and taking care of her family. They attended Salem United Methodist church, where Don was a Deacon and Lena sang in the Church Choir for many years. They enjoyed traveling and archery. Lena loved accompanying Don on weekend hunting trips. Don and Lena both came from large families and often went camping with their siblings, friends and grandchildren and took long vacations to visit their families.

After Don’s passing in 2012, Lena enjoyed living alone in the Arbor Senior Apartments of Lodi. She was assisted by her granddaughters, Misty and Andrea, and nieces, Jeanette and Sandy. She always looked forward to their visits, and they took exceptionally good care of her. After six years at the Arbor, Lena moved to the beautiful Oakmont Assisted Living in Stockton, California for two years before moving to Utah to live with her daughter Katherine Tanner, son-in-law David and granddaughter Alecia Budworth-Wilson, who quit her job to be Lena’s full-time caregiver. The move to Utah was a long trip at the age of 94, but as in typical Lena-style, she handled it well. She has had quite the journey and has lived a wonderful long life surrounded by family and dear friends. She often joked that God had forgotten her, but little did she know our prayers were answered as we prayed to God for more time with her.

Lena was the proud mother of three children, Donald David Flaherty (Deborah), Katherine Flaherty Tanner (David) and Gregory Allen Flaherty (Loren). She was the loving grandmother to six grandchildren, six great-grandchildren and one great-great-grandson whom she absolutely adored. Lena is survived by her daughter Katherine, siblings Lola Erikson (Oregon), Jake Gieszler (Oregon), Eugene Gieszler (Nevada) and Larry Gieszler (North Dakota). Lena is also survived by all her grandchildren and many nieces and nephews.

Lena will be laid to rest next to her loving husband Donald at Lodi Memorial Cemetery in Lodi, California. A memorial service will be held at a later date when it is healthy and safe to do so.

Arrangements are made under the direction of Spilsbury Mortuary, 110 S Bluff St, St. George, Utah. Friends and family are invited to sign her online guestbook at www.spilsburymortuary.com