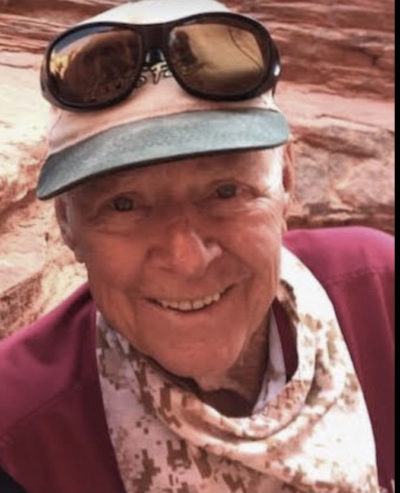 Early Monday morning on Jan. 11, 2021, Gerald E. (Jerry) Harper passed away from respiratory issues. He was 91 years young, having been born in Lava Hot Springs, Idaho on 30 April 1929 to Geoffrey and Irene Elizabeth Rowbotham Harper. He had a very diverse life growing up in Ogden, Utah.

He became an avid hunter and fisherman, enjoying many hours in the field in the western United States, Canada and Alaska.

Jerry was a hardworking man with a “get it done” work ethic. He worked at Hill Air Force Base for close to 20 years. During that time, he and his young family lived in Clearfield, Utah. He then built a home in East Layton, Utah that was one of the first homes at that elevation on the mountain.

After leaving government service he purchased and managed a refuse collection business in Layton, Utah. He retired as a chief master sergeant in the Air Force Reserves with over 30 years’ service.

He eventually landed in Duchesne, Utah where he met and married his loving wife Lori. Together they built a convenience store/gas station that was appropriately named Bonanza. During that time, he also purchased and improved a farm that was admired by others in the surrounding area because he was able to get four productive cuts of hay annually instead of the typical three.

After many devoted years of hard work, in 1994 Jerry and Lori were able to retire into a comfortable life in Ivins, Utah. Besides being able to spend more time hunting, fishing and golfing, he became a skilled woodworker. His crafts were admired by many, whether it was a grandfather clock, cabinets, doors, Post Office box banks or game boards. Jerry was a world champion horseshoe pitcher as well as placing in numerous horseshoe tournaments. He was also an accomplished motorcycle racer in his younger life and let this experience morph into being a passionate side-by-side ATV pilot on many long day trips throughout the Southern Utah area.

In lieu of flowers please consider a donation to the Wounded Warrior Project.