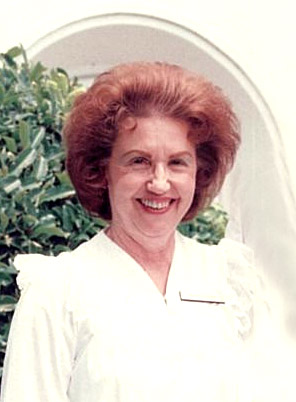 Marian Roundy was born on May 21, 1928 to Rees Jones and Sarah Rosalie Griffin Roundy in Escalante, Utah in a big brick house that was only partially finished at the time, built by her father, Rees. She departed this life at the age of 92 years on Jan. 9, 2021

She was better known to many as “Peg,” a nickname given her by her father as far back as she can remember.

Marian was the youngest of eleven children and enjoyed sharing her experiences of growing up in a large family. She described her home as being full of “lots of music, laughter and good times, as well as sometimes sad.”

She attended Escalante High School and was class president from her sophomore through her senior year and was also a cheerleader. Her ambition was always to be a musician. She played drums and piano in the school orchestra and played the mellophone in the school band. She was a joy to listen to and to watch when she sat down to play the piano. Nobody played like Marian.

During Marian’s senior year in high school, she met a handsome young man named Lane Foote, who was passing through town on a work-related trip with his uncle. She knew the moment she met him that this would be the man she would marry. After a short courtship, Lane gave Marian a ring at her graduation. The two were married on July 5, 1946 and raised a wonderful family of eight children.

Her claim to fame came while working evenings as a waitress in Moab, Utah. The movie, “The Greatest Story Ever Told,” starring the great actor, Ricardo Montalban was being filmed in Moab. She often waited on him in the restaurant and he encouraged her to be an extra in the movie.

Marian was a hard worker and was always serving. She had a wonderful sense of humor and was loved by everyone.  She loved the Gospel and had an unwavering testimony. She has served in many capacities and has been a tremendous example of service and unconditional love to her children, grandchildren and great-grandchildren. While serving as a relief society president, she also served in the Oakland Temple once a week typing names for ordinance work to be done.

The family moved frequently, but finally settled in St. George, Utah in about 1975.  Her goal was to be able to play the organ in the temple. She practiced diligently and was finally called to be an organist in the St. George Temple, which she did for several years. Eventually, she and Lane served together as ordinance workers for over ten years.

Marian lived for her children, grandchildren and great-grandchildren. In her own words, she says, “If you only remember one thing about me, I would hope it would be that I have a testimony of the truthfulness of the Gospel. I know God lives and He is truly our Heavenly Father who loved us so much that He sent His Son, Jesus Christ, to this earth, born as a babe in a manger as a gift to us to bless us with His love, teach us by His example and show us the way back to our Father in Heaven. I pray that each of you will develop your own testimony and hold fast to the truths of the Gospel. Nothing will ever bring you more joy than listening to the still, small voice and doing what the Lord would have you do. I love you all!”

She is preceded in death by her parents and siblings, her husband, Lane, a daughter, Sherri Ann (Foote) Holyoak and a grandson, Jake Jarrett Foote. She is survived by: her children Alan (Sandy) Foote, Danny (Joan) Foote, Jerry (Patty) Foote, Shelly (Michael) Duggar, Nancy (Layne) Johnson, Tammy Foote and Tom (Debbie) Foote; 35 grandchildren and 65 plus great-grandchildren.

Family and friends are invited to view the funeral online, please log in to webcast.funeralrecording.com. Type in the event number 45204 and password MRF2021.

Arrangements are made under the direction of Spilsbury Mortuary, 110 S Bluff St, St. George, Utah. Friends and family are invited to sign her online guestbook at www.spilsburymortuary.com