Steven Lee, events manager for Panguitch City, said the event, which includes $1,700 in cash prizes, is expected to attract ice fishing enthusiasts from around the Southwest.

The ice fishing derby will feature an individual competition for both youth under 18 and adults, with separate cash prizes awarded in each age category, as follows.

Additionally, for the first time, the ice fishing derby will also feature a team competition. Teams, which can consist of up to five adults or children, will compete for a grand prize of $500 for the heaviest combined catch (maximum of four rainbow trout per angler). Rainbow trout is the only type of fish that will count in the derby.

The four-per-person daily catch limit will be strictly observed, along with all other state fishing regulations, Lee noted. Each angler must have a valid Utah fishing license to participate. Attendees are also asked to observe COVID-19 safety protocols by wearing masks and practicing social distancing throughout the event’s duration. To register, click here. 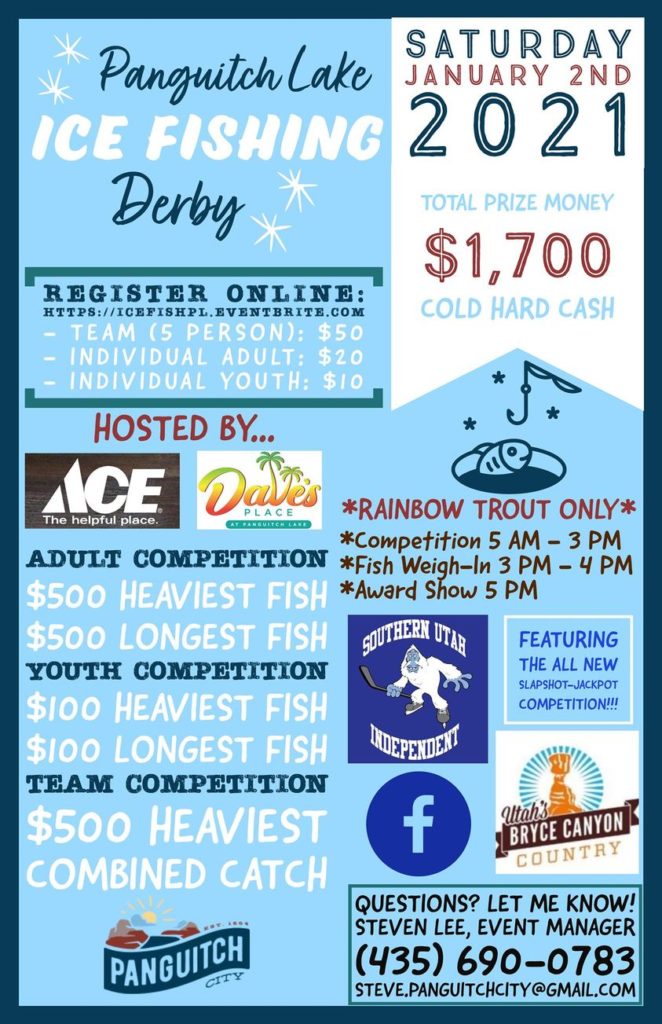 The competition will run from 5 a.m. to 3 p.m., followed by a weigh-in. The awards ceremony is scheduled for 5 p.m.

Another new event this year will be a hockey slap shot competition, where contestants will pay $5 for a chance to hit a shot past former Southern Utah Independent high school goalkeeper Alyssa Fain.

“On the off chance that you can sneak a puck past our champ, you win half of the pot,” Lee wrote in a Facebook post, adding, “Just don’t get your hopes up!”

Lee, who said he enjoys researching the history of Panguitch Lake, said the lake been a popular fishing spot for at least a century and a half.

“The mass migration of thrill-seekers and recreationists to this secluded frozen wonderland is hardly a new phenomenon,” Lee wrote, adding, “The mystical hold of the lake over its enamored visitors has been the topic of conversation among visitors for at least 150 years now, and the abundance of mountain trout contained within its crystal clear waters have become the stuff of legends.”

Lee also shared the following quote from a newspaper correspondent, which was printed in the Deseret News back in 1876: “To sum up the advantages of a trip to Lake Panguitch, they are briefly, sailing on one of the handsomest lakes in Utah, fresh trout in abundance, picturesque scenery, pure mountain air, and retirement from the haunts of men. It is a grand hermitage.”

Here & there: Wonder womaning through the hard stuff