ST. GEORGE — A new addition to the Veterans Memorial Park in Washington City was unveiled Wednesday morning as a part of scaled-down Veterans Day activities.

Originally meant to be unveiled Wednesday morning as part of a large-scale Veterans Day celebration, which would have included a parade and other activities, the introduction of the city’s newest addition was done before a small crowd and recorded for public viewing online.

“We have the opportunity to video a portion of our Veterans Day program,” Washington City Mayor Ken Neilson said of the day’s activities. “With the current pandemic events, we felt this would be most appropriate.”

Speaking to the focus of the day, Neilson said his father and four uncles served in various branches of the military, and that helped him to remember the great sacrifice of those in the armed forces.

Later on, a small gathering of city officials, veterans and others gathered at the corner of Telegraph Street and 100 East where the new bison statue was covered by a camouflage tarp.

During the unveiling ceremony, Washington City Council member Kress Staheli shared some of the history of how the “Blazing Freedom” bison came to the city.

Originally, the idea of bringing a bison statue into the city to honor the area’s veterans was spearheaded by Washington City resident Kelli Charlton.

“She was the designer and the driving force – she had the vision to make this happen,” Staheli said.

He added that getting the bison was a community effort due to the parties involved.

Charlton grew up in a military family and has four sons who currently serve in the armed forces.

“This bison means more to me than you can imagine, and I’m so proud to have been a part of it,” Charlton said.

Washington City’s new painted bison is one of many spread throughout the community that is a part of a program supporting Dixie State University that launched in 2016. Under the program, businesses, individuals and municipalities are able to sponsor the school through the purchase of a bison statue that can be painted in various ways.

For the “Blazing Freedom” statue, military themes, including elements with local significance, were added by Jody Gerber, a Dixie State graduate who also painted the “American Trailblazer” bison statue that currently sits in front of the Sullivan Soccer Park. She was recruited for the project by Charlton.

“It seemed only fitting that a veterans bison be commissioned, not only as a way to support Dixie State University, but more importantly, honor our veterans,” Staheli said.

Painted over the summer, the “Blazing Freedom” bison had its debut at the Washington County Fair in August where it was a part of the World War II veterans memorial. It was then taken to the veterans home in Ivins where resident veterans were able to take photos by the statue, Staheli said.

From there, the statue spent some time at SunRiver’s veterans memorial park and then the Brio community clubhouse until landing at its permanent home in Washington City’s Veterans Memorial Park.

Staheli then called for the camouflage tarp over the bison to be removed and began to explain the various scenes painted on it.

One side of the bison featured P-51 Mustangs, a famous World War II aircraft, flying in the skies over the ocean where a Coast Guard cutter and naval warship were depicted. The warship, Staheli said, was the USS Biloxi, which had a connection to local veterans. Above the Biloxi, an eagle was painted soaring overhead.

On the opposite side of the bison were depictions of infantry soldiers and marines marching through a field while a B-52 bomber plane flew overhead next to an American flag. There was also a Black Hark helicopter painted on this side of the bison, as well as a M109 Paladin launching a projectile. The Paladin is meant to signify a connection to the 222nd National Guard Unit based in Utah.

Painted on the bison’s head are fireworks the symbolize the “rocket’s red glare,” Staheli said, adding that there are no eyes painted on the statue. That is for soldiers who are counted as missing in action or prisoners of war and are “unseen” as a consequence of that. 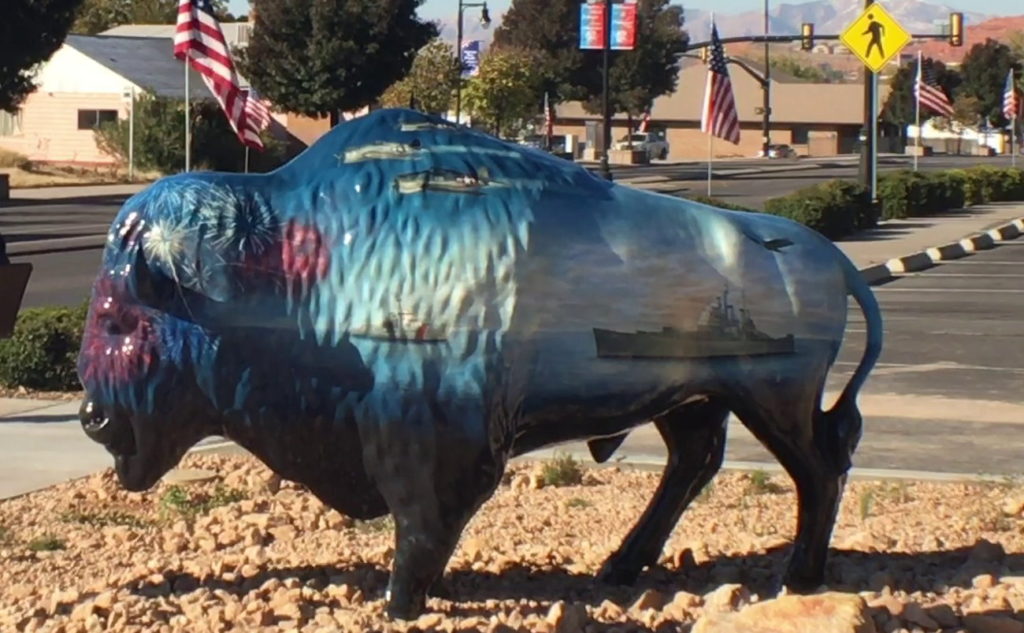 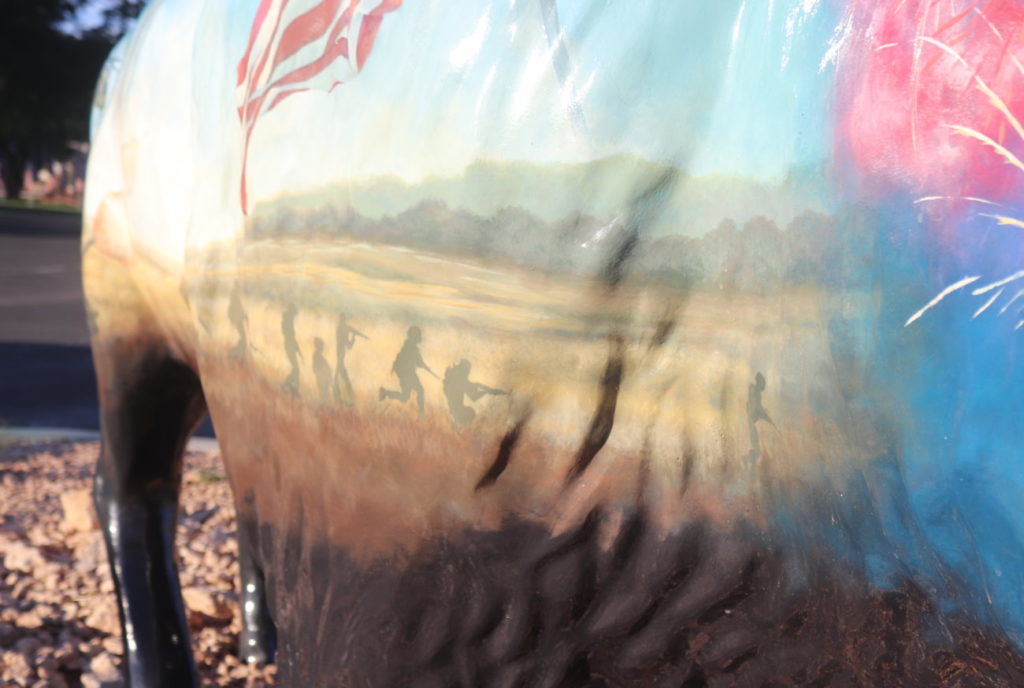 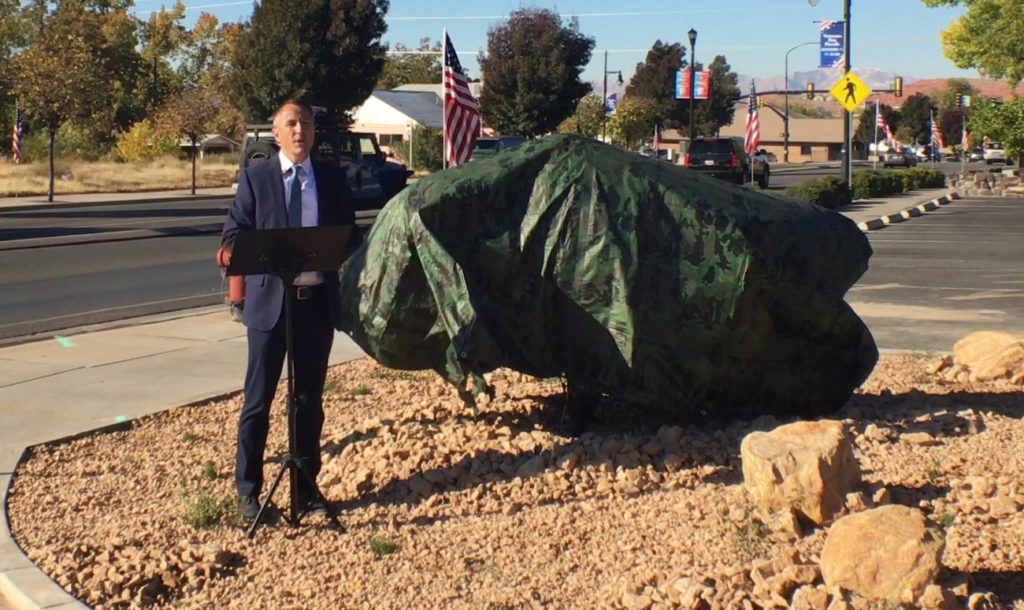 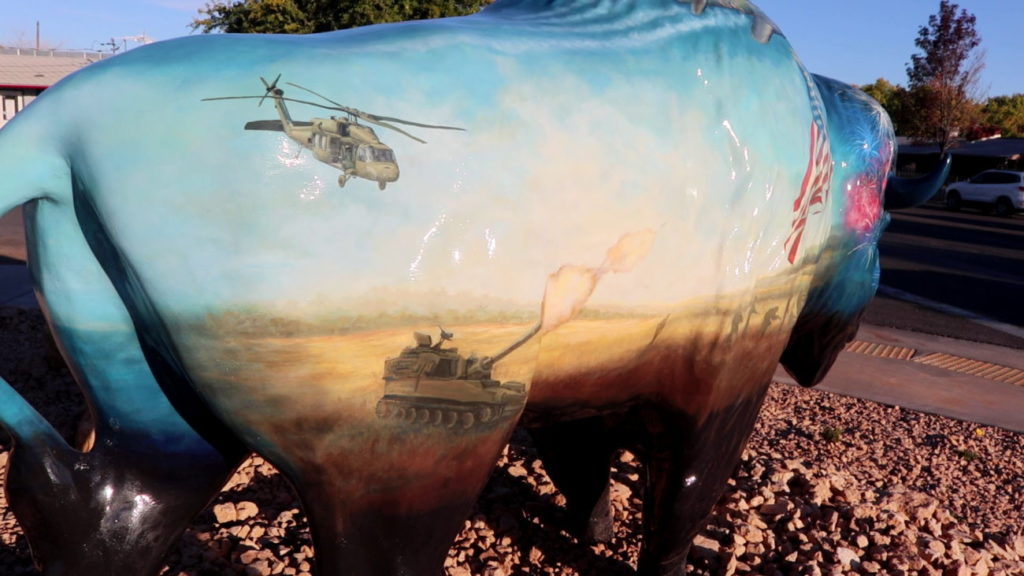 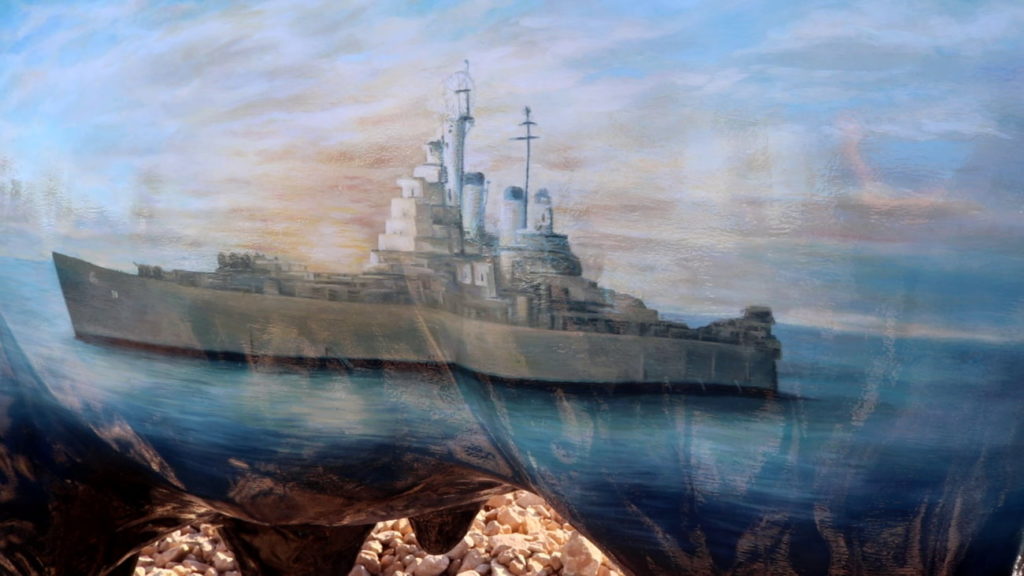 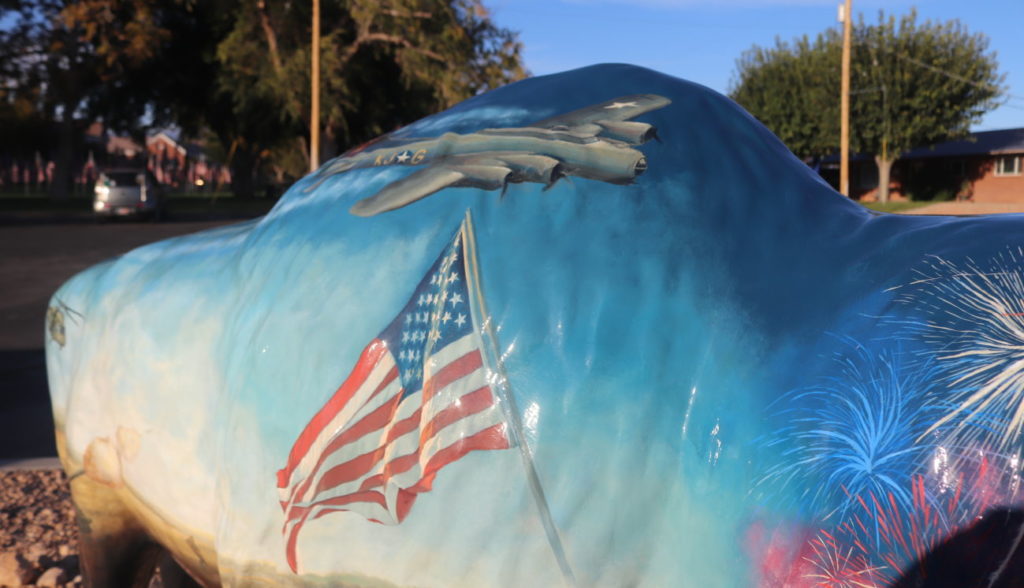 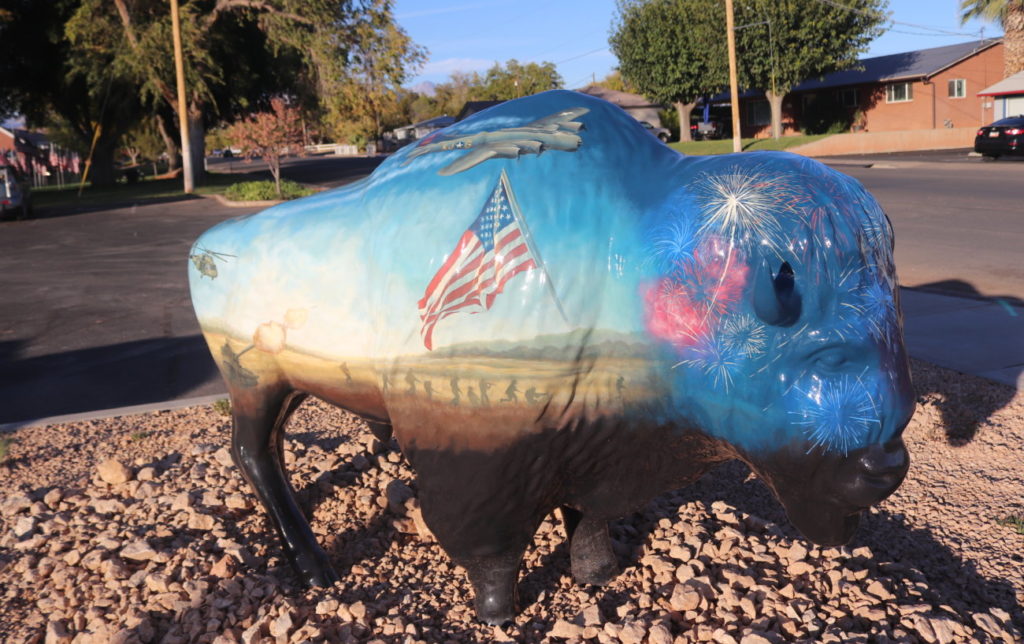 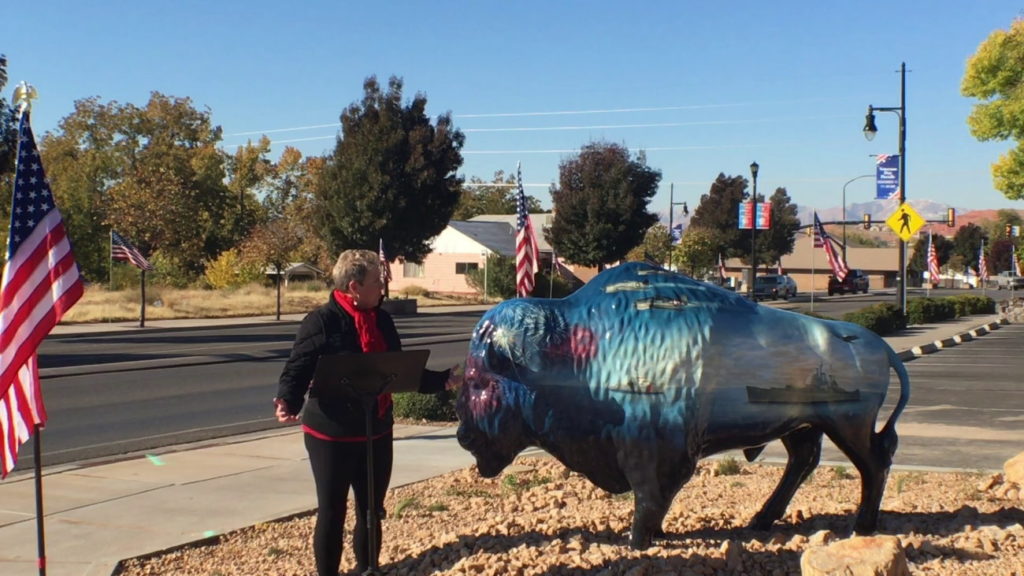 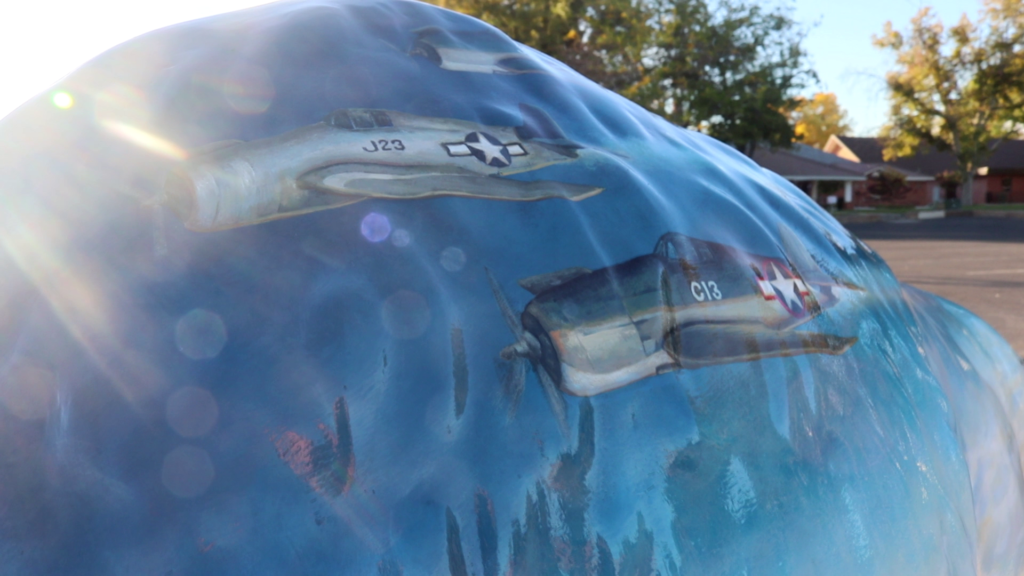