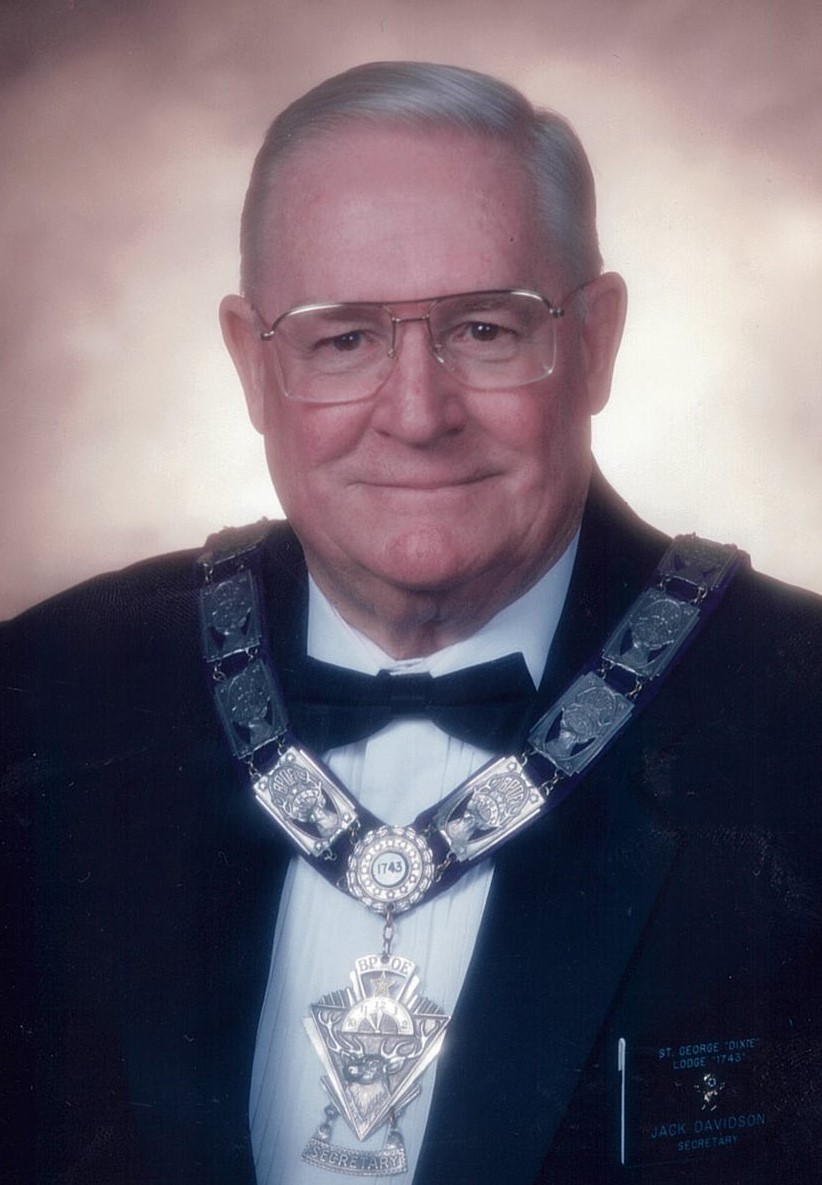 The headline in the Mobridge, South Dakota Tribune read “Fire Sweeps Room of Mobridge Club.” On Oct. 8, 1927, a prospective member of the “Rinkydinks” Club accidentally set fire to the clubhouse, which was attached to a garage. Since the clubhouse lacked electricity, the “Rinkydinks” used candles during their evening meetings. Young Jack Davidson, four years old, went into the clubhouse and attempted to light a candle but ended up setting fire to a bunch of papers. The concluding paragraph read “Neighbors, seeing the smoke and flames put in the fire alarm and the fire department soon had the fire out with little damage to the garage, but the clubhouse was a wreck.”

This was the start of our dad’s life-long love of clubs, service organizations, and dare we say – meetings with friends. Luckily, no fire has ever been associated with his membership or leadership with Masonic Lodge, Elks Lodge, American Legion, Scottish Rite of Freemasonry, Ancient Order of the Shrine, Kahal temple, and probably a multitude of other organizations he did not divulge to us. We were taught by example that one should give back, pay-it-forward, serve others and work hard. Perhaps the most poignant example of this was his service in the United States Army where as a medic, he fought in World War II.

Born Oct. 14, 1924, in Mobridge, North Dakota to Doris Irene Davidson (Richards) and Charles (Chuck) Lorraine Davidson, our Dad loved his mom and admired his father. Grandma Davidson was the quintessential homemaker and lady, and Dad adored his mom. During the Depression, they lived in a railroad boxcar because Granddad was a railroad man. Dad would tell us that even in the boxcar, Grandma had flowers (weeds) in a vase, on a card table used for meals, covered with a tablecloth.

Dad liked a tidy home and frankly was a better homemaker than his wife, Audrey, whom he married Sept. 13, 1954. Dad had a son, Jack Lee from a previous marriage, and Mom had a daughter, Leslie Kay, also from a previous marriage. They combined to make a family, had another daughter in 1955 (Rachel) and a son, (Charles AKA Chuck or Woody) in 1963. Audrey had Alzheimer’s for 13 years, and Dad took care of her. Whenever we thanked him, the reply was “It’s my duty!” but truly, it was because he adored her.

As with all families, we had our struggles but can honestly say we never heard a disparaging word from our father, nor did he ever complain about how hard he had to work to support us. He wasn’t very handy – but we suspect that conveniently provided time for his myriad interests. He got his pilot license to fly small planes, earned a brown belt in karate (or maybe judo), got a bachelor’s degree in 1974 (at the age of 50!) and worked towards an M.B.A. when he was 55.

He took cooking classes, learned to golf, sang in a barbershop quartet (because he was short he had to stand on a box), sang in the Cedar City Chorale, was a voracious reader and loved to travel. The pinnacle of his travels was his trip to the Middle East with Mom. He was open to seeing, doing and loving new things. Dad, we will miss your sweetness but hope you’re dancing up a storm with Mom, swinging to the big band music you love. We love you. We honor you and will be eternally grateful for the lessons gently and lovingly given to us by you, our father. Your children, Jack Lee, Leslie, Rachel and Chuck.