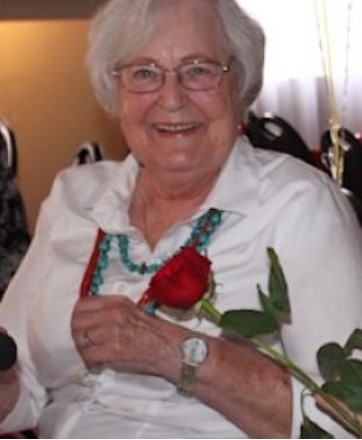 Georgia spent her childhood in her birthplace, Mayfield, Utah  (population 467 in 1930) and graduated from Manti High in 1948.

She attended LDS Business College and was working in Salt Lake City in 1954 when she met a tall, handsome, civil engineer John Drummond ‘Dave’ Davenport. Dave was from California and had moved to Utah to work on the construction of the Wanship Dam.

They had a six-week, whirlwind courtship and were married Oct. 16, 1954, after Georgia asked Dave a series of three questions “Do you like me? Do you love me? and Do you love me enough to marry me?”

Marrying Dave forever changed the trajectory of Georgia’s life. His work took him all over the world to work on dams, missile silo, NORAD, hydroelectric, copper mine and irrigation projects. Georgia willingly supported him and helped their growing family say goodbye to old friends and transition into new schools, neighborhoods and friendships. By the end of the decade, Georgia and Dave had lived in Bangladesh;  Saskatchewan, Canada; and Salina, Kansas.

The 1980s brought them back to Utah where they settled in South Jordan following Dave’s retirement. As a child,  Georgia never dreamed she would circle the globe multiple times.  During all the constant moves and upheaval of routines, Georgia maintained a home filled with love for their family which grew to include five daughters, Virginia, Susan, Jeanne, Marilyn and Christina.

Georgia loved to cook. She loved to entertain, and her Sunday dinners and Thanksgiving feasts were legendary. Everything on Georgia’s table was homemade to gourmet standards. She was an excellent seamstress and made the majority of her daughters’ school and  Sunday dresses. In her later years she took up needlepoint and her framed creations will be treasured and passed down to many generations. She was an avid reader, had a great sense of humor and had her wits about her until the very end. Georgia had a strong testimony of Jesus Christ and in his church, The Church of Jesus  Christ of Latter-day Saints.