ST. GEORGE — An SUV was spotted perched precariously on the side of a steep cliff southwest of Bloomington Wednesday, prompting authorities to call in Washington County Search and Rescue to check if any occupants were inside — only to find the vehicle abandoned.

The incident began hours earlier when a resident at SunRiver spotted a vehicle that appeared to be perched on the side of a cliff in a remote area several miles south of St. George sandwiched in between Little Round Valley and Big Round Valley and called police.

Officers responded to the area, and due to the steep incline and remoteness of the landscape, they first flew a drone to determine the exact GPS coordinates associated with the vehicle’s location. The drone revealed the SUV was actually in Washington County, Washington County Search and Rescue liaison Sgt. Darrell Cashin said.

At that point, the incident was turned over to Washington County Search and Rescue. Cashin and another deputy made their way out to the area, and once they arrived, they were able to hike up the side of the hill and then down to where the Chevrolet Blazer was located to check if anyone was still inside of the vehicle.

“That was our primary focus,” Cashin said. “To make sure there wasn’t anyone in it who could be injured or unconscious and unable to get help on their own.”

When contacted, Cashin learned that both men were safe.

At the time of the incident, the men were out joyriding in the area when they went over a steep ridge and became stuck in the sand. They went on to explain they had no way of getting the SUV out due to the steep drop directly in front of them and an even steeper incline directly behind the vehicle, which made a safe recovery impossible.

“There was no way they were getting back out of there on their own,” Cashin said.

Cashin said from what they found at the scene, it appeared as though the men made it over the hill just fine, but did not realize how steep the other side was until they came over the top. By then it was too late to recover. Caught off guard, the SUV continued for about 30 feet and the wheels became stuck in the soft sand, which is what ultimately brought it to a stop.

Fortunately, that Blazer became stuck, Cashin said. Otherwise, it could have easily continued forward until it went off the side and dropped the 80-120 feet to the bottom.

“Then, we would have had a whole different situation on our hands,” he said.

During the call, the driver told Cashin they were working on getting a wrecker out there to pull the SUV to the top of the hill to have it removed, a task the men were given a few days to complete.

The Blazer was pulled from the side of the cliff and towed from the scene late Thursday afternoon. Video of that recovery was provided to St. George News courtesy of Sg-3 Towing and Recovery.

The video can be viewed at the top of this report.

It was a positive outcome, Cashin said, and the incident would have taken a great deal longer had the St. George Police Department not flown the drone across the area and provided the exact location of the SUV, thus allowing the deputies the ability to access the area quickly. 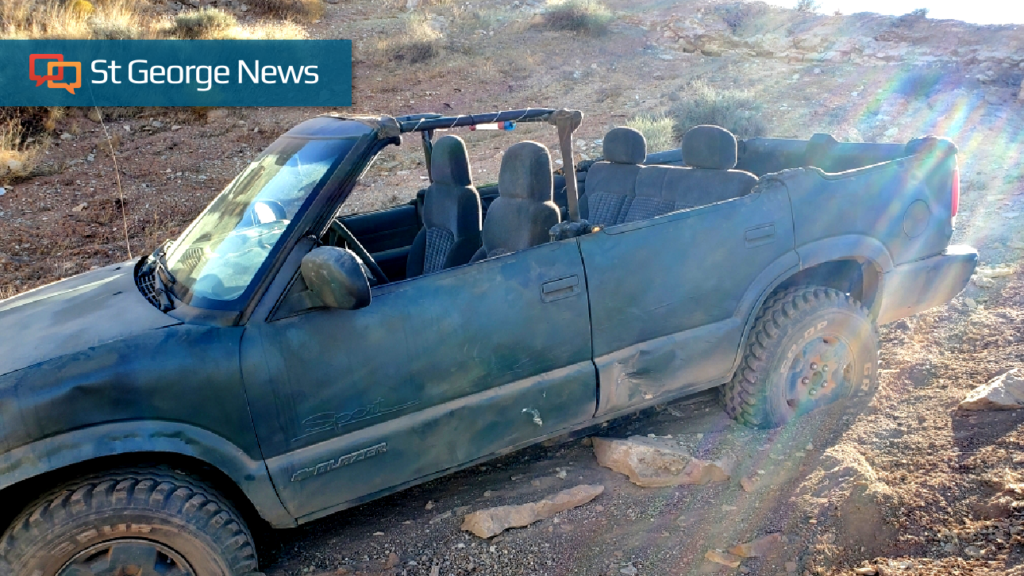 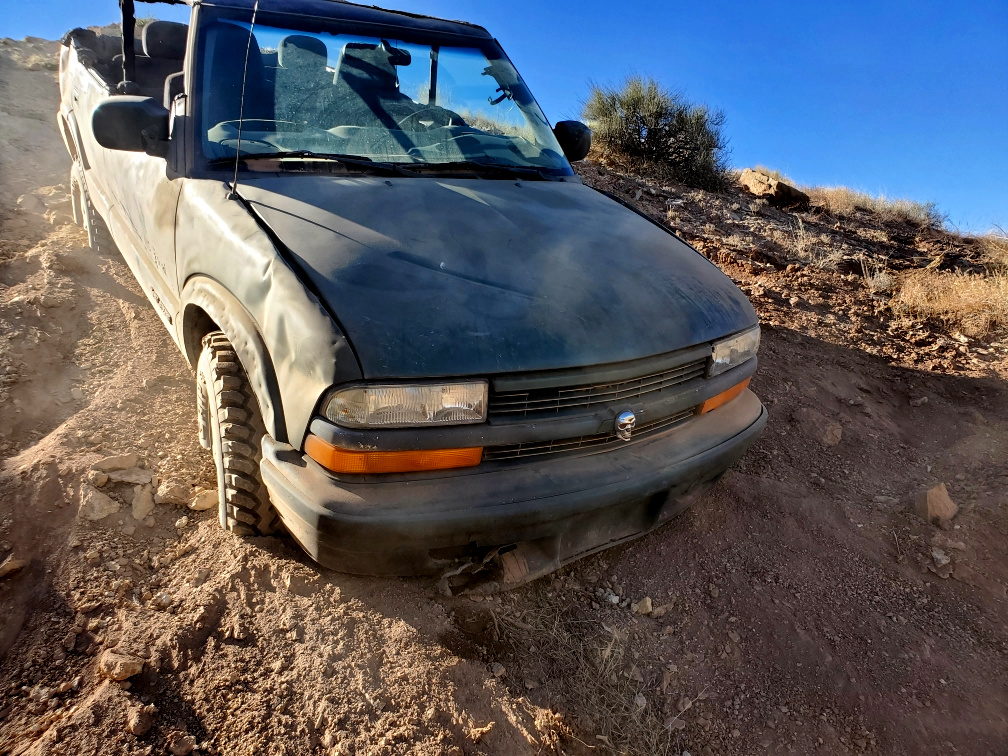 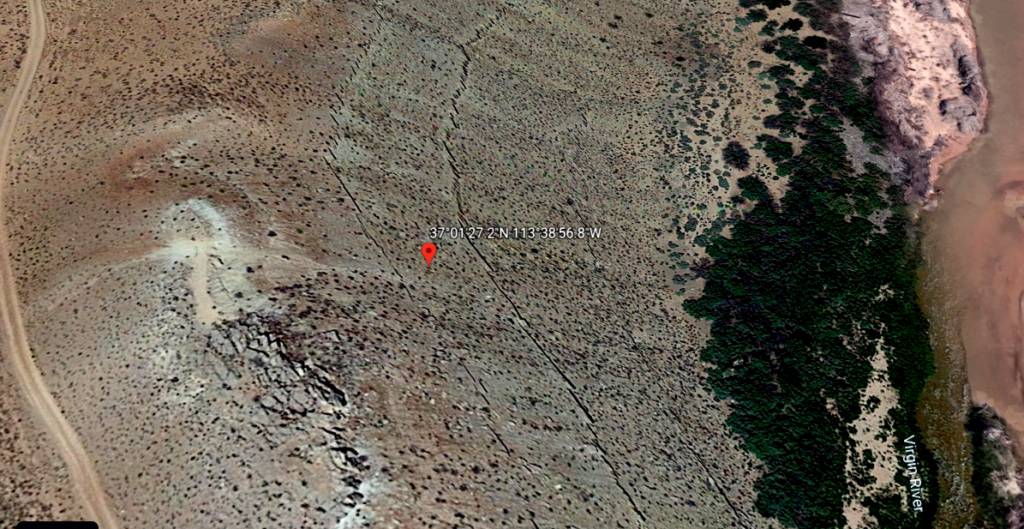 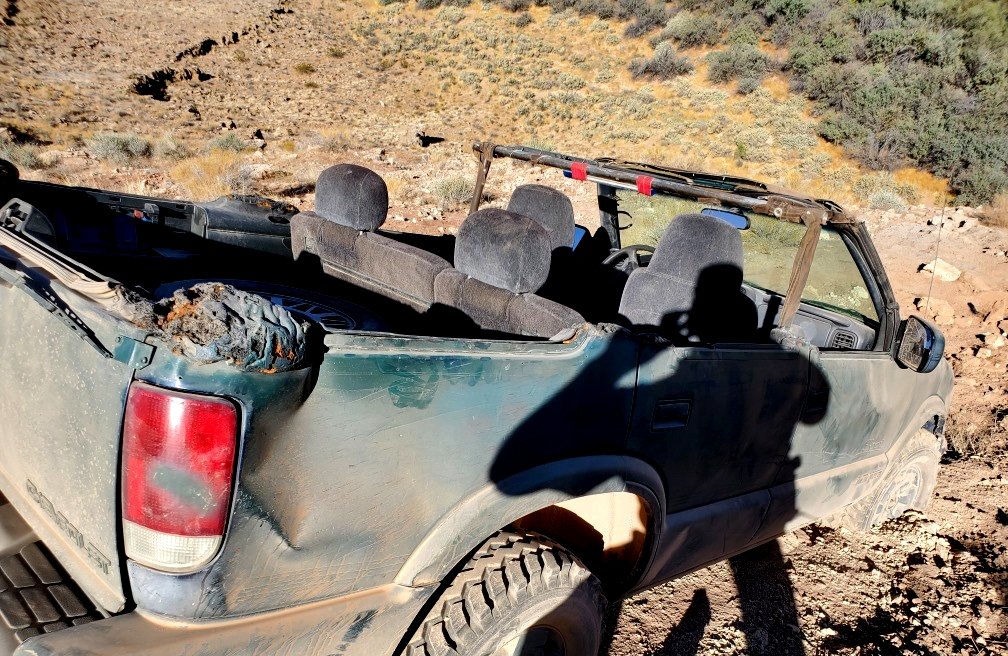