ST. GEORGE — A rollover near Littlefield, Arizona left a vehicle in a deep ravine off of southbound Interstate 15 and a driver trapped in the overturned car for hours until a resident spotted the wreck and called for help early Tuesday morning.

Shortly after 6:30 a.m. PDT, emergency personnel responded to a single-vehicle rollover on southbound I-15 near the Exit 8 on-ramp involving a white four-door passenger car that was found on its side down a deep ravine more than 30 yards below the roadway, Arizona Department of Public Safety Sgt. John Bottoms told St. George News.

They also found the driver, who had suffered wounds to her chest area, trapped inside of the vehicle, Bottoms said. He added he spoke to the driver as she was being freed from the car to determine how the car ended up where it did.

The woman told Bottoms she was traveling to Las Vegas from Ogden to visit family, and as she approached the on-ramp, the car left the roadway and continued along the dirt shoulder for more than 100 yards or more, “maybe 150 yards” until the car struck a barbed-wire fence and rolled “nearly end-over-end” down a steep culvert where it came to rest on its side.

“You literally could not see that car from the roadway,” Bottoms said. “It went off and then disappeared from sight.”

Hours later, a resident in the Beaver Dam area happened to be driving in the general area and spotted the car lying on its side down in the ravine and called 911 for help.

While still at the scene, the woman told troopers she was trapped inside of the car for approximately two hours, explaining that it was dark when she rolled the car, but she wasn’t sure exactly how long she’d been trapped.

When one of the troopers responded to the hospital to follow up with the driver, the woman said as she headed south on I-15, she “was blinded by bright headlights shining in her direction” and lost control of the car, Bottoms said. She then told the trooper she thought the crash took place sometime after 9 p.m., not just before dawn, as she reported at the scene.

Being that she wasn’t discovered until just after 6:30 a.m. the following day, “there was a big discrepancy in time, so we’re really not exactly sure when that rollover happened.”

Bottoms continued by saying it could have been the shock from the crash and then being trapped that created the confusion, but either way, the driver sustained possible rib fractures and other minor injuries during the rollover.

“So she was really lucky to have come out of this so well considering that no one even knew she was down there,” he said.

He attributes the lack of serious injuries to the fact that she was properly restrained at the time of the crash in addition to the airbags that deployed upon impact that helped to mitigate the force of the impact as the car rolled down the embankment.

No citations have been issued and the crash was still being investigated at the time of this report. This report is based on statements from police or other responders and may not contain the full scope of findings. 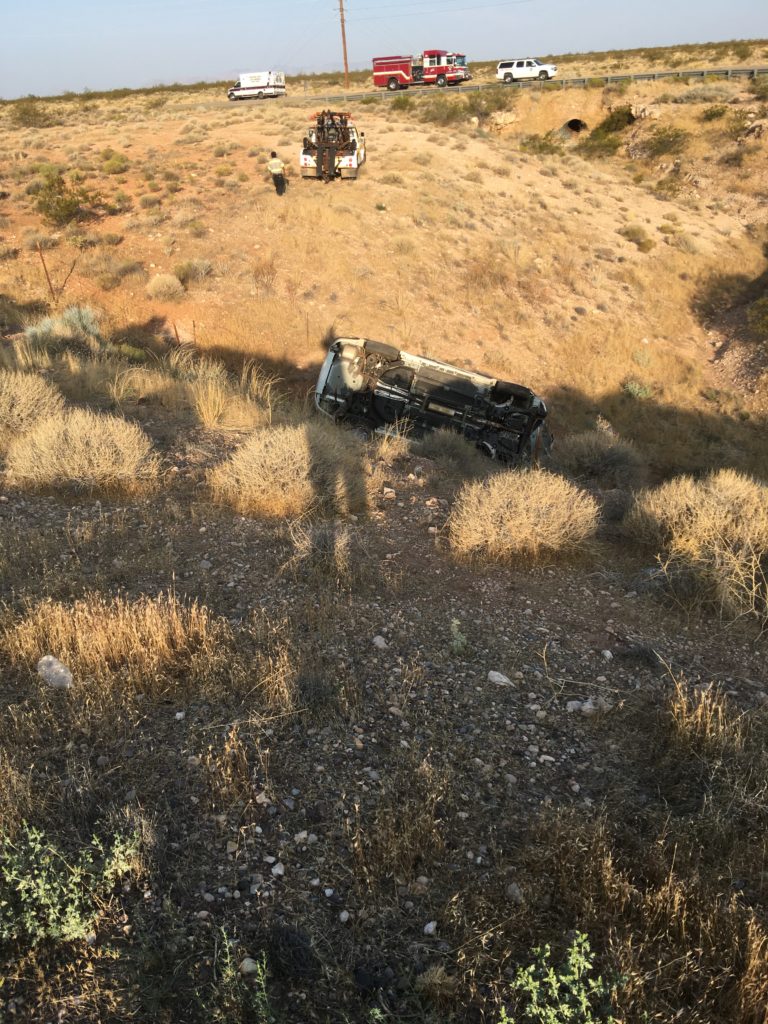 Passenger car is found on its side in deep ravine following a rollover that traps the driver, Littlefield, Ariz., Sept. 22, 2020 | Photo courtesy of Beaver Dam Littlefield Fire and Ambulance, St. George News 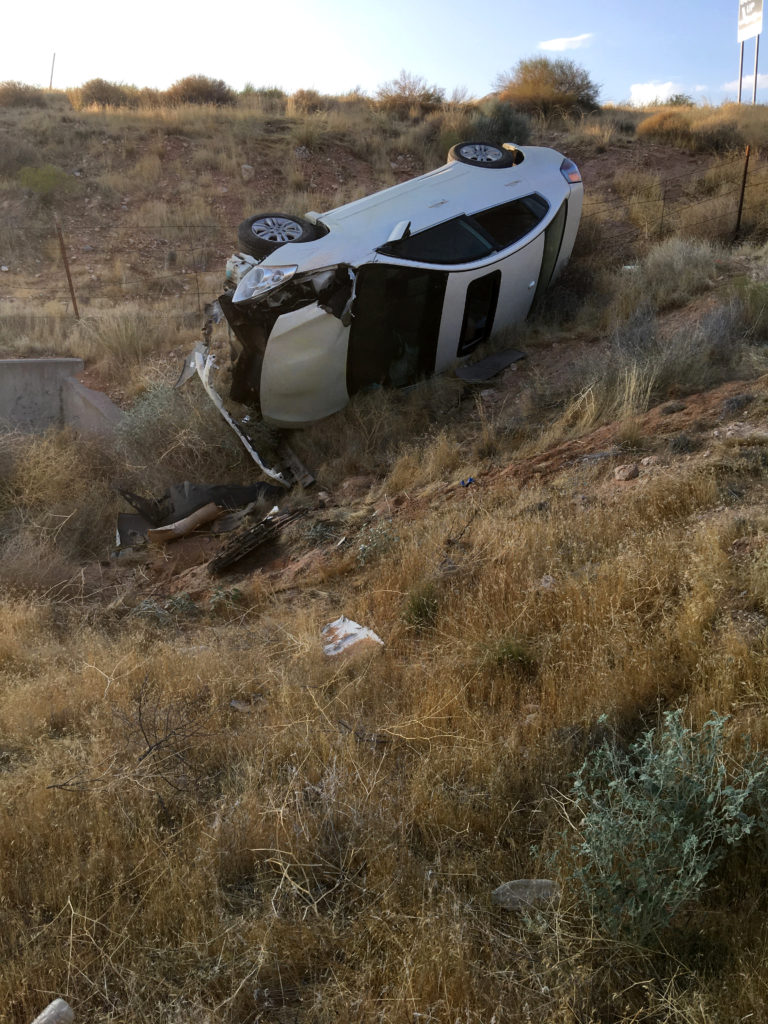 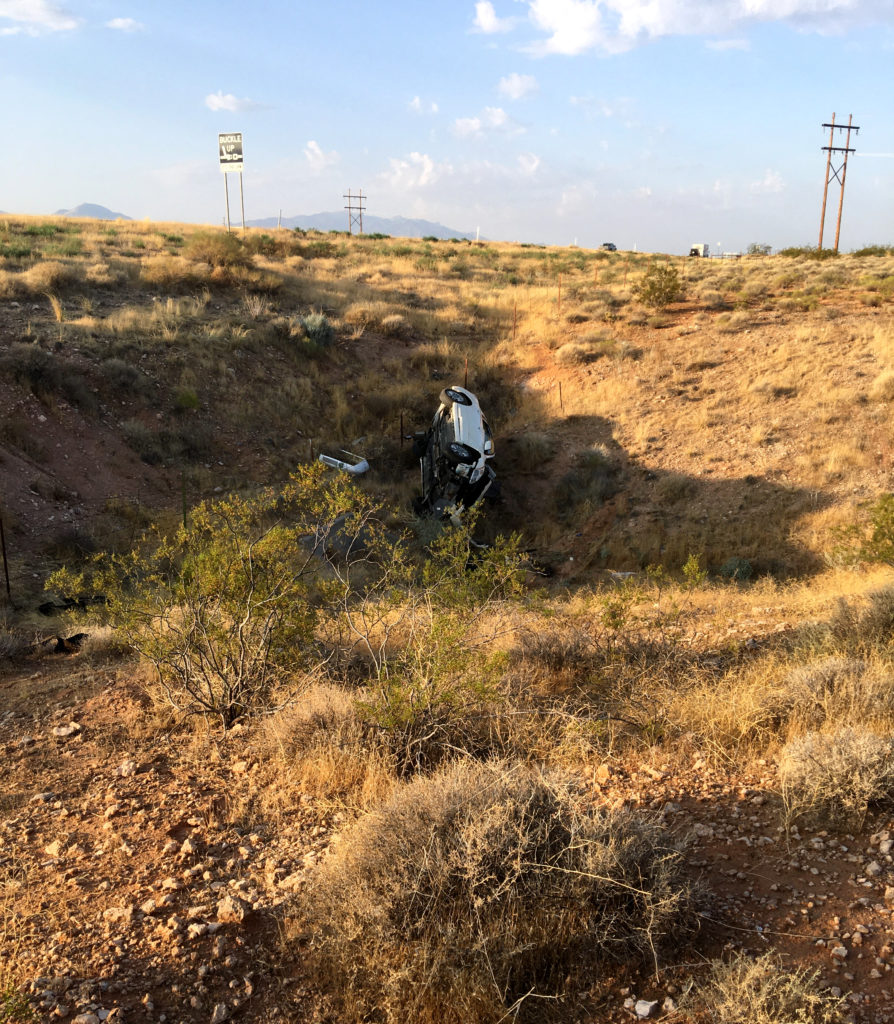 Passenger car is found in deep ravine lying on its side following a rollover that traps the driver, Littlefield, Ariz., Sept. 22, 2020 | Photo courtesy of Beaver Dam Littlefield Fire and Ambulance, St. George News