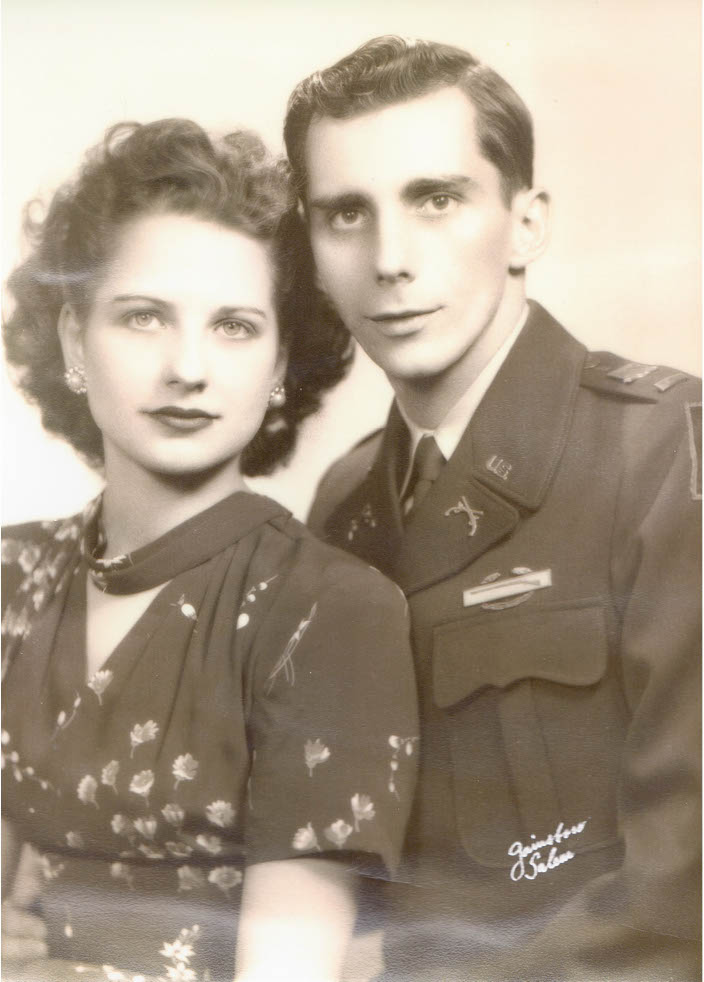 Born in Heidelberg, Germany to Luise and Heinrich Englert, she had a wonderful childhood interrupted by the start of WWII in 1939. Her father was drafted into the Army at the age of 46 because he had a Jewish employer and chose not to join the Nazi Party.

My mother continued her schooling and then had to fulfill a duty year (Pflichtjahr) by working for a Nazi doctor and his wife and five children, cooking and housecleaning. In return, she was given a monthly streetcar pass.

Later, because her grandfather was an official in the German railroad, she was able to get a job there working 12-hour shifts with limited food rationing.

After the war when her father and brother returned home from the internment camps where they were held, they were a complete family again.

My mother met her first husband, Lt. Wilbur J. Burchstead (Army), in Heidelberg, and after their engagement flew to Chicago to join him in marriage.

She went with him to other duty stations including Fort Dix, New Jersey and Fort Sam Houston, Texas during the Korean Conflict where their first child, a daughter Marcia, was born.

They then returned to her husband’s hometown of Beverly, Massachusetts where two sons Bruce and Gregory were born. She and her husband enjoyed gardening both vegetables and flowers.

Her husband, now a Lt. Col., died of a sudden illness at the age of 47 leaving her with three children to raise.

She later married Robert E. Welch and they moved to Danvers, Massachusetts. He predeceased her in 1994.

During that time, she attended North Shore Community College and obtained an associate’s degree as a physical therapist assistant and worked for the local visiting nurse association.

She lost her youngest child, Gregory, in an airplane accident in 1985.

After she retired, she had an apartment in a senior housing complex located a stone’s throw from the senior center where she took part in special meals, and activities such as day trips and exercise classes.

She was a communicant at St. Richard’s Church in Danvers.

She also belonged to the YMCA and Ferncroft where she participated in water aerobics classes.

She enjoyed theater and ballet productions with her daughter, traveled extensively with her husbands to Germany, throughout the U.S. and Canada.

She accompanied her daughter to international figure skating competitions (where her daughter wrote articles for newspapers and magazines) throughout the U.S., Canada from Halifax to Victoria and Europe.

She enjoyed cruises to the Caribbean and Europe.

In 2013, she joined her daughter and son-in-law Dennis Holland when they moved to Ivins then later to Sun River in St George. She was a member of the Dixie Garden Club.

In addition to her surviving children Marcia and Bruce Burchstead and son-in-law Dennis Holland, she is survived by a brother, Robert Englert and his three daughters in Heidelberg, Germany. Additionally three grandchildren Meagan Leigh Burchstead of Denver, Colorado, Kyle and Sean Burchstead of Massachusetts and a nephew Kenn Manning and wife Marijane of Beverly, Massachusetts. She especially loved her step-son Robert and wife Mary of New Hampshire.  In-laws include brother, Steve and wife Carol Welch and sister, Verna Elwell all of New Hampshire. Also special nieces Catherine Watson and Irene Hooks both of California.

Services will be held at Grace Episcopal Church on Saturday, Sept. 12 at 10:30 a.m. COVID-19 restrictions will apply.

Interment will be in Massachusetts at a later date.

A special thank you to the staff at Intermountain Home Health and Hospice for providing her with comforting care and especially Carol, her hospice nurse and Cindi, her CNA were able to take care of her in the final days. Also thanks to those in the Oncology Department of Intermountain Hospital especially Dr. Karen Lin, who treated my mother with kindness and compassion.

Thanks to CNA’s Novesia Sanft and Elisha Watkins who also provided for her at night.