ST. GEORGE — Late Sunday night, 2 inches of rain fell in less than 90 minutes, resulting in 3 feet of flooding in some places. When this water accumulates in lower lying areas faster than it can drain, the result is the potential for sinkholes such as those that appeared in St. George.

On Sunday, the National Weather Service issued a significant weather advisory for parts of Southern Utah, warning of a “strong thunderstorm” expected in the evening. The advisory was later upgraded to a flash flood warning.

That flash flood inundated Washington County and helped to form three sinkholes. Tyler Knudsen, a geologist specializing in hazards mapping with the U.S. Geological Survey, told St. George News that sinkholes happen when the ground below the land surface is no longer able to support the surface above.

The first large sinkhole opened up in the parking lot of  the Ramada Inn on St. George Boulevard and was joined by a slightly smaller sinkhole several feet away that was discovered Monday night.

Another sinkhole was reported off of Foremaster Drive near the Select Health building Monday, one that was more than 15 feet long and nearly 5 feet wide. A large storm drain is located at the bottom of the hole, along with a expansive water line running several feet below the road surface that could have been lost but for the quick actions of repair workers who placed straps around the pipe. The straps were anchored to a telephone pole placed across the hole to keep it from fracturing until permanent repairs could be made.

As the damages continued to rise, the city declared a state of emergency, which could provide aid from the state and even federal assistance if necessary. Gov. Gary Herbert traveled to the southern part of the state Monday and held a press conference in the parking lot of the Ramada Inn, accompanied by city officials, where it was announced that damages were estimated to be nearly half a million dollars.

David Cordero, St. George City’s communications director, told St. George News the city’s first priority is to stabilize the ground underneath the hotel parking lot. The vehicle that dropped into the sinkhole when the hole opened up will also need to be removed.

Luckily, he added, “no one was in that vehicle when it happened,” adding that the storm “hit out of nowhere.”

Sinkholes, water and the ground below

A sinkhole usually forms by erosion caused by frequent exposure to water, when rocks or salt beds are naturally dissolved by groundwater moving around them, Knudsen said. They also form in an area of the ground that has no natural external surface drainage, so when it rains, the water remains inside the sinkhole and typically drains into the subsurface.

Sinkholes form when water that is slightly acidic from absorbing carbon dioxide from the air and soil dissolves the bedrock and forms pathways and channels within the rock. When water from rainfall moves down through the soil and encounters bedrock, it begins to dissolve along horizontal and vertical cracks and crevices in the rock.

Eventually, these cracks and crevices become large enough to start transporting small soil particles that are carried off, which causes the surface to slump down gradually, forming a small depression on the surface that acts like a funnel and gathers even more water. This process makes the crevice even larger as it washes away even more soils underneath. The ground becomes unstable and the surface ultimately collapses.

In some cases, sinkholes form so slowly that little change is noticeable, while in other cases they can form suddenly. Knudsen said sinkholes are more common in places where the bedrock is formed from soft minerals and carbonate rocks like salt, gypsum and limestone.

In St. George, much of the rock is made up of carbonate rock or gypsum, the type of rock that is typically associated with catastrophic sinkhole formation, particularly in situations where there is an influx of rain, such as was the case Sunday.

Soil types also play an important role in the formation of sinkholes. The region is made up of two primary soils, the first of which is sandy soil that contains large particles and air spaces but not enough organic material to hold water. The second, clay soil, is made up of tiny particles packed so closely together that it doesn’t drain well.

Some sinkholes become so large that they have swallowed rivers, including one that guzzled more than 2 miles of the Virgin River east of Pah Tempe Hot Springs in 1985. Eleven years later, La Verkin Creek disappeared into a sinkhole for nearly a week.

“The key to preventing sinkholes is to control the runoff so that water is not allowed to pool, which then sinks down and erodes the soils,” Knudsen said.

Cordero told St. George News there are ongoing efforts to investigate and assess any issues relating to the water drainage and runoff systems that are currently in place throughout St. George.

In addition to the sinkholes, the overall damage from Sunday’s storm included downed power lines, roads and homes that were flooded with thick mud and debris and a number of vehicles that stalled or were even moved as the flood rose ever higher. St. George Police Officer Tiffany Atkin said the weather resulted in 21 brush fire calls, four structure fire calls and one utility-related call Sunday night. Those totals do not include all calls countywide, just the calls involving incidents in St. George. 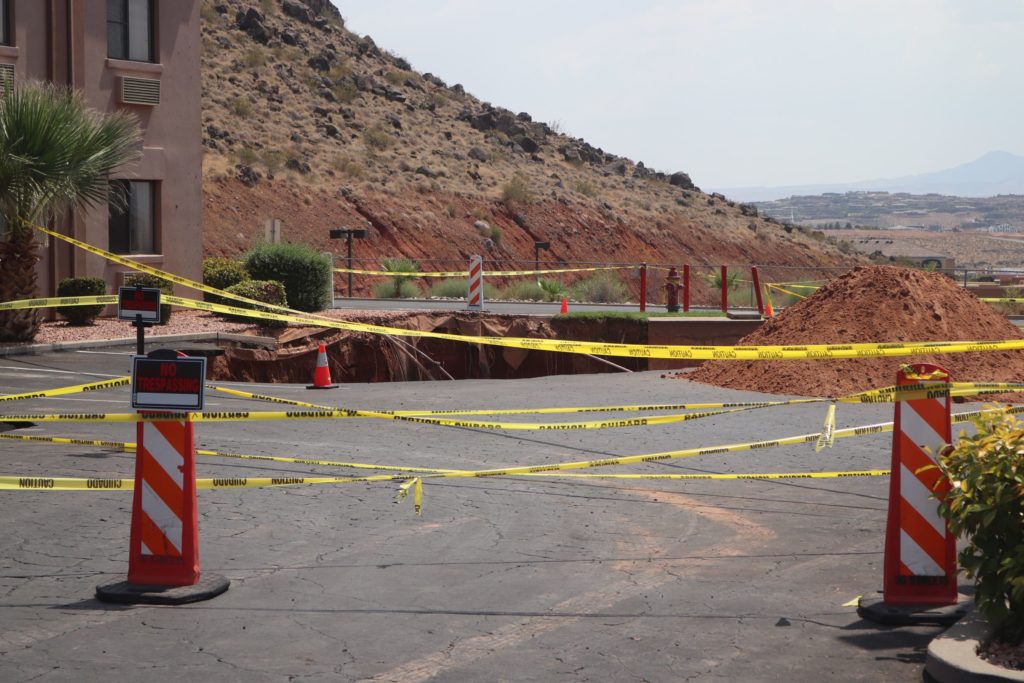 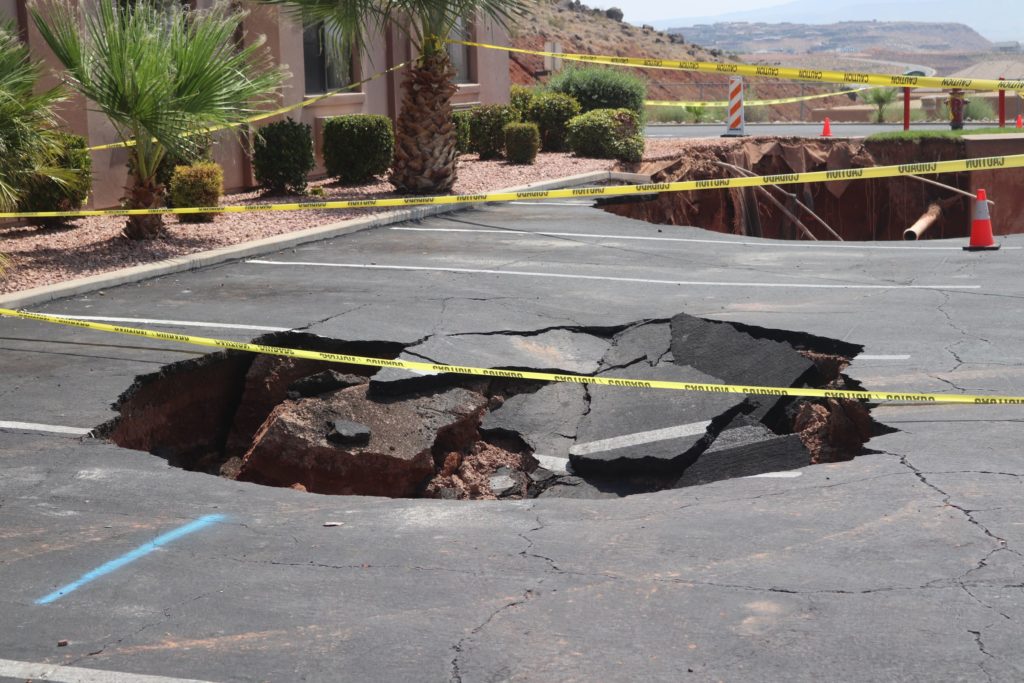 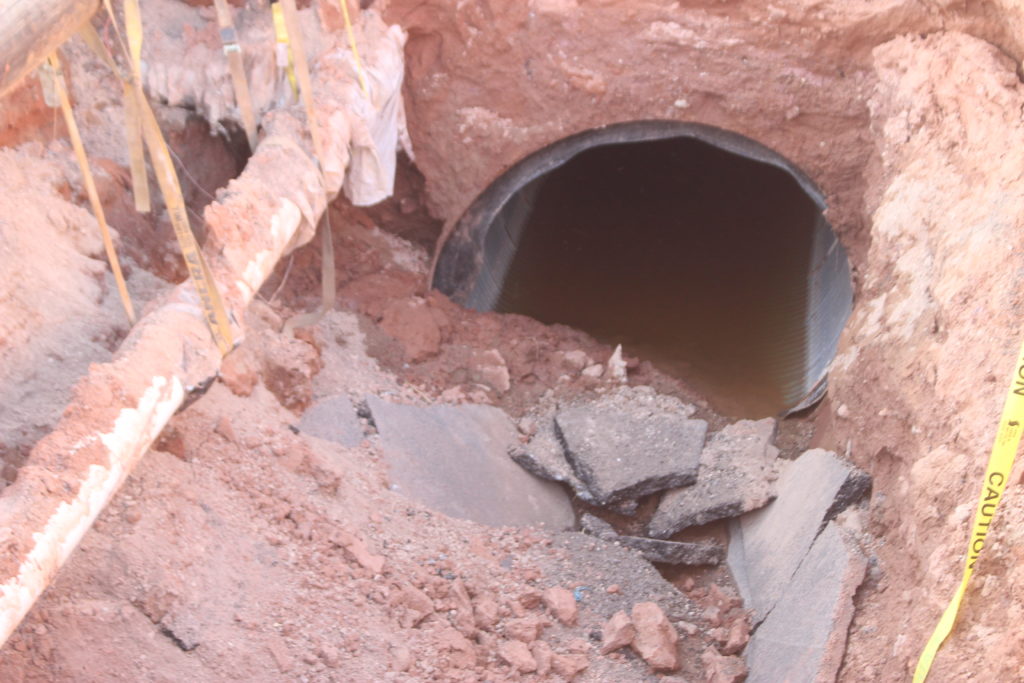 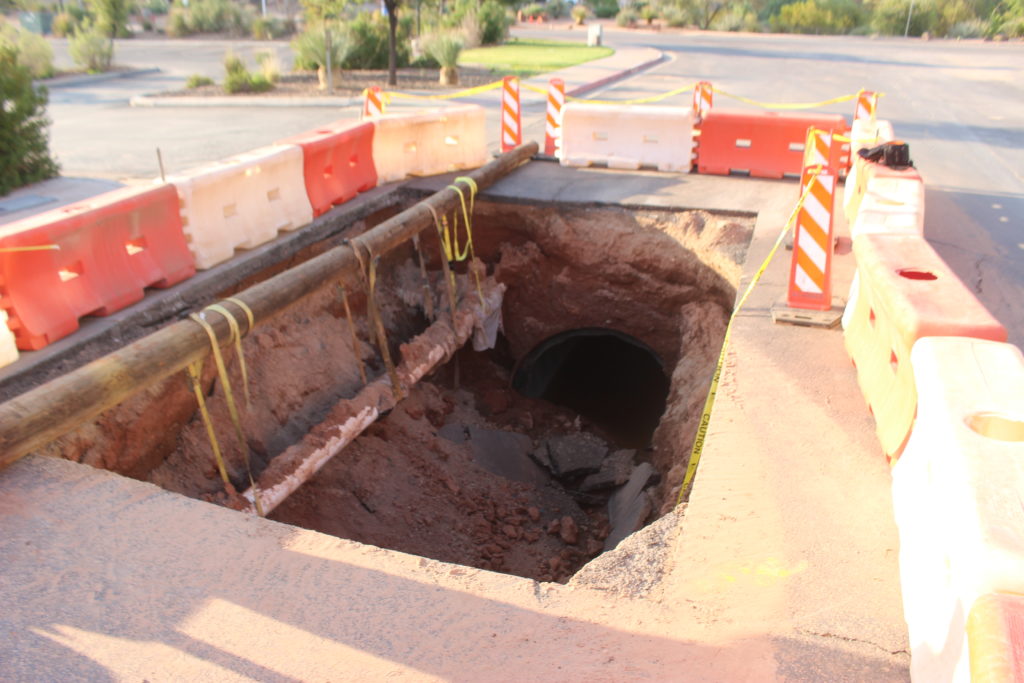 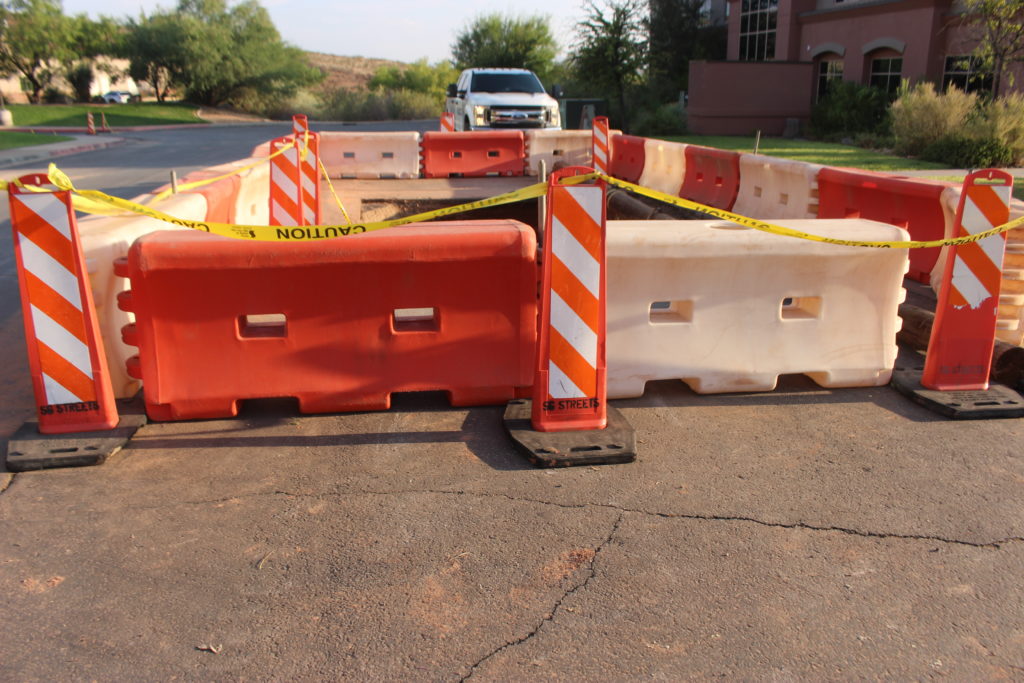 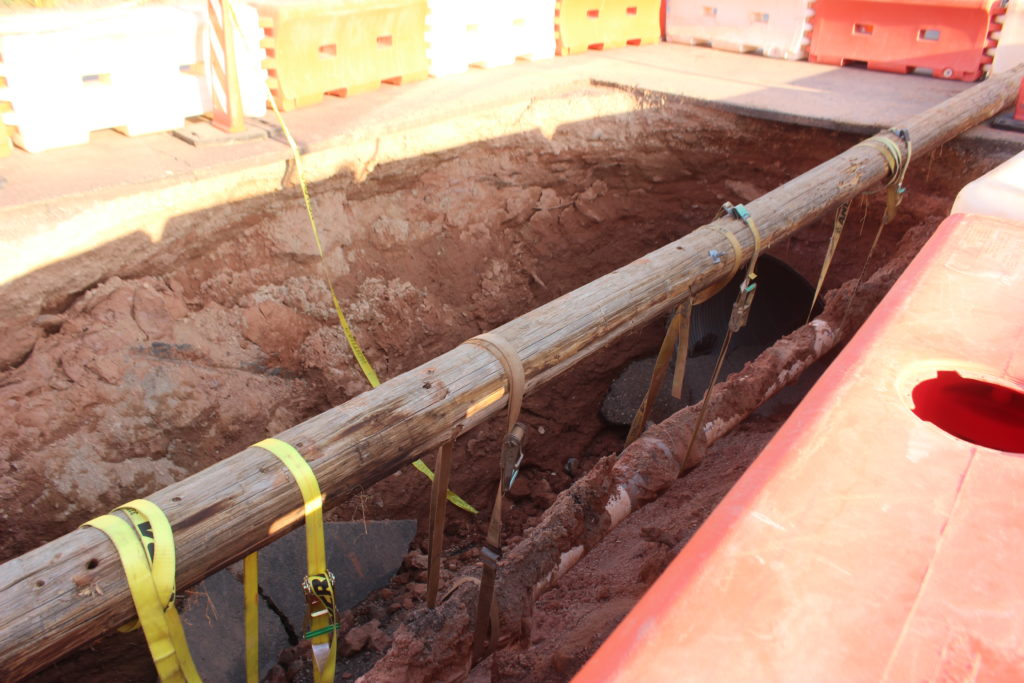 Water line is strapped to telephone pole and secured until permanent repairs can be made following a sinkhole that formed on Foremaster Drive as a result of the storm, St. George, Utah, Aug. 26, 2020 | Photo by Cody Blowers, St. George News

'My only obstacle is my gender': Women leadership in Iron, Washington counties ranks less than 25%