FEATURE — Southern Utah and Northern Arizona are replete with stories of enterprising families who saw potential in the tourism market created by the area’s close proximity to several national parks, from Jacob Lake Inn near the Grand Canyon’s North Rim to the Thunderbird Restaurant and Lodge in Mt. Carmel Junction. Those sold passersbys gas and food and later provided lodging.

One, in particular, first provided booze and entertainment for its guests but later morphed into a museum with an eclectic collection.

There are no stalagmites or stalactites in Moqui Cave. It is more of a large, natural hole in the surrounding sandstone. However, it is still a one-of-a-kind destination that is impossible to miss as one drives north from Kanab on U.S. Highway 89.

Garth Chamberlain, who established Moqui Cave with his wife, Laura, had roots in the area. He was a descendant of Thomas Chamberlain, the president of the United Order of Orderville in the late 1870s and early 1880s. Orderville is located only 16 miles north of the cave along U.S. Highway 89. To pay homage to this ancestor and the heritage of the area, today the museum features a display of United Order artifacts and photographs.

Chamberlain holds the distinction of being the first Brigham Young University football player to be drafted into the NFL. The Pittsburgh Steelers selected him in the 17th Round (151st overall) in the 1942 draft. He played one year for the Steelers, then went on to the Salt Lake Seagulls  the Beehive State’s only foray into professional football.

He played on the team during the 1946 and 1947 seasons, the only two the Pacific Coast Football League franchise played before the whole league folded in 1948. Chamberlain later served as a Salt Lake County Sheriff’s deputy. Before his football and law enforcement days, Chamberlain served in the Army Air Corps during World War II.

He and Laura bought what would become Moqui Cave from a local rancher in 1951. The “cave” was once a speakeasy during the Great Depression. At first, the Chamberlains turned it into something similar. They took advantage of the fact that Kanab frequently played host to many outsiders due to its popularity as a backdrop for Western films of the day. The cave provided a place for movie stars and film crews to get a cold beer, dance and cool off. It was also a popular watering hole for construction workers who built the nearby Glen Canyon Dam in the 1960s. According to a plaque outside its entrance, the cave itself was even a backdrop for one movie filmed in the area, “The Girl in the Black Stockings” in 1957.

They turned the place into a dance hall by leveling the floor with 150 truckloads of dirt, covering that dirt with 7,000 square feet of concrete, then painting the walls white and building a stage, Brandon Griggs wrote in his book “Utah Curiosities: Quirky Characters, Roadside Oddities and Other Offbeat Stuff.”

Chamberlain also fashioned a bar with colorful inlaid stones that still graces the museum. That bar became the centerpiece for frequent socials and dances hosted at the locale.

“It was a regular hootenanny in this subterranean spot,” the Roots Rated website notes in its page on the cave.

“During the week, one could grab a bite to eat and something cool to drink at their fully functional bar and a live band would come play on Friday and Saturday nights,” the Moqui Cave history web page states.

Chamberlain was quite a craftsman as his obituary notes that he “won many awards for his jewelry, woodcarving, bronze sculptures, oil paintings and Kachina dolls”

After about 20 years of hosting those “hootenannies,” the Chamberlains grew tired of them and converted the cave into a gift shop and museum to house Mr. Chamberlain’s art and what would become one of the largest collections of phosphorescent fossilized minerals and rocks in the U.S., Roots Rated reports.

At one time, a huge, strikingly painted triceratops head built over the entrance greeted visitors. But after Chamberlain died in 1988, Chamberlain’s family refashioned the entrance as it is today, a replica of a Native American dwelling, a description of the cave on the Roadside America website reports. The cave’s name refers to the Hopi tribe of Native Americans, who have inhabited the region for centuries and many of the Native American artifacts displayed in the museum were found locally, so the newest entrance design fits.

The cave has three main rooms: the main corridor where a guide tells guests a little bit about its history when they enter, the bar room, which features the old bar and Chamberlain’s artwork and memorabilia. The third room is the “cave” itself, which is the room where the dances were held and now is dark and lit with blacklights to illuminate the fossilized minerals and phosphorescent rocks.

Today, Moqui Cave is still owned and operated by Chamberlain’s kin, chief among them his grandson, Tanner.

Many visitors have deemed the attraction a tourist trap, albeit an interesting one. In an informal survey of members of the Facebook group “Utah Ghost Towns and Other Places,” just over half of respondents said it is a tourist trap, but still most of them said it was worth visiting once.

One of the best parts of visiting the cave is that the inside temperature holds steady between 65 and 70 degrees year-round, even in the scorching summer heat.

For more information on Moqui Cave, visit its website.

“Days” is a series of stories about people, places, industry and history in and surrounding the region of southwestern Utah. 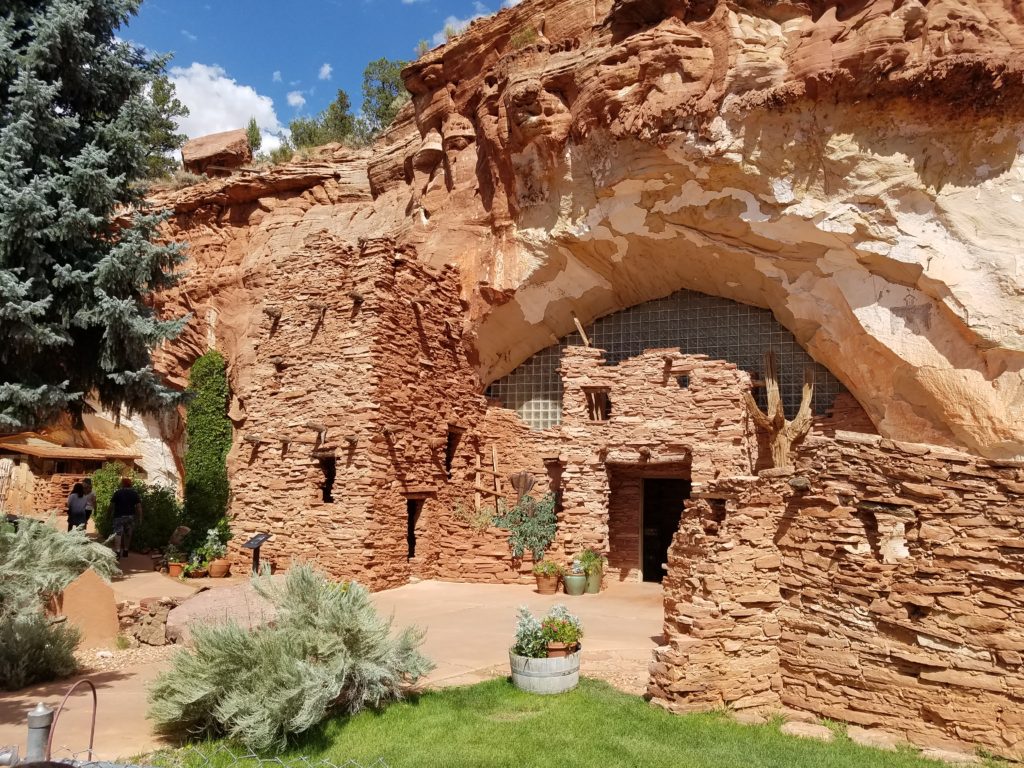 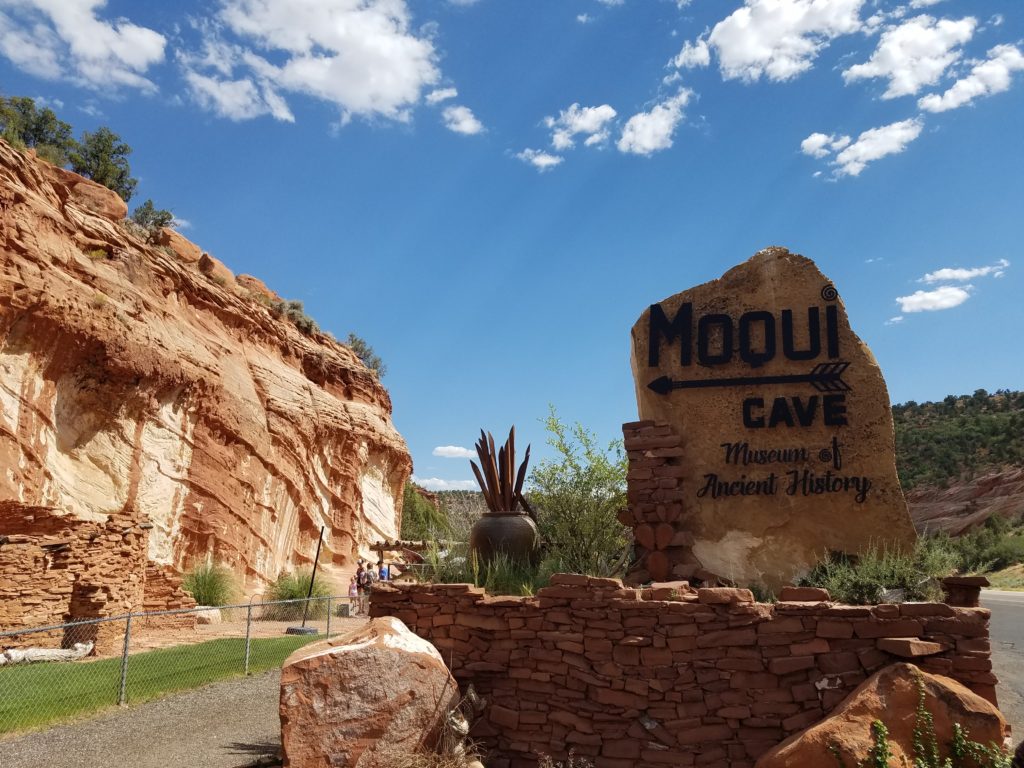 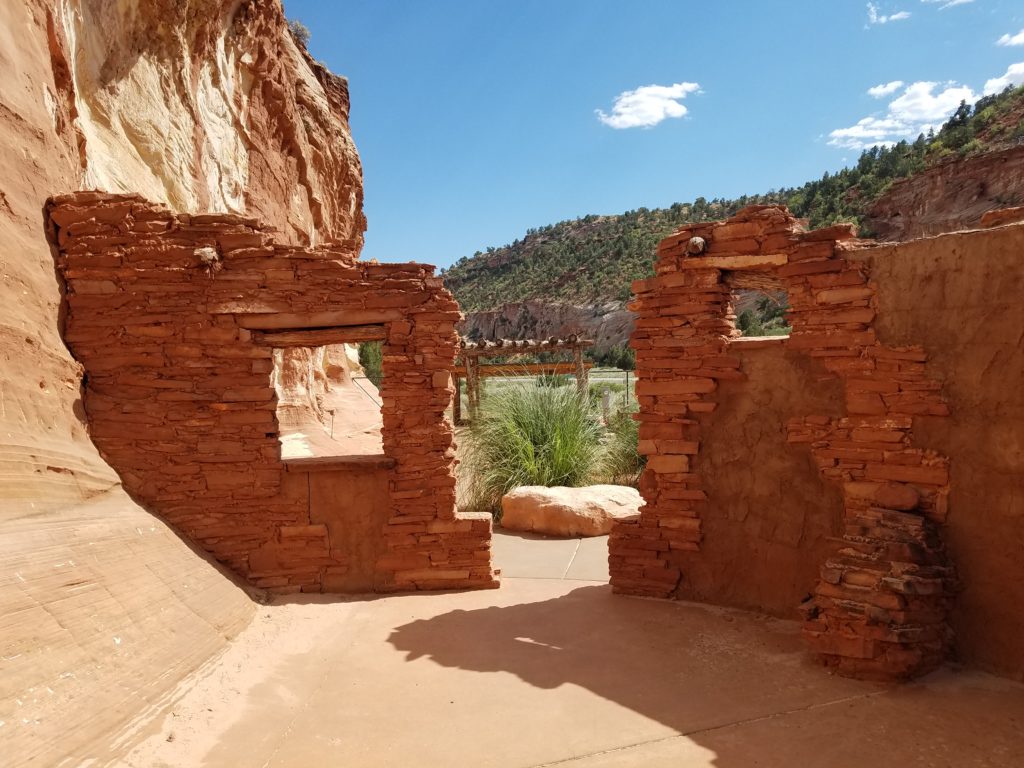 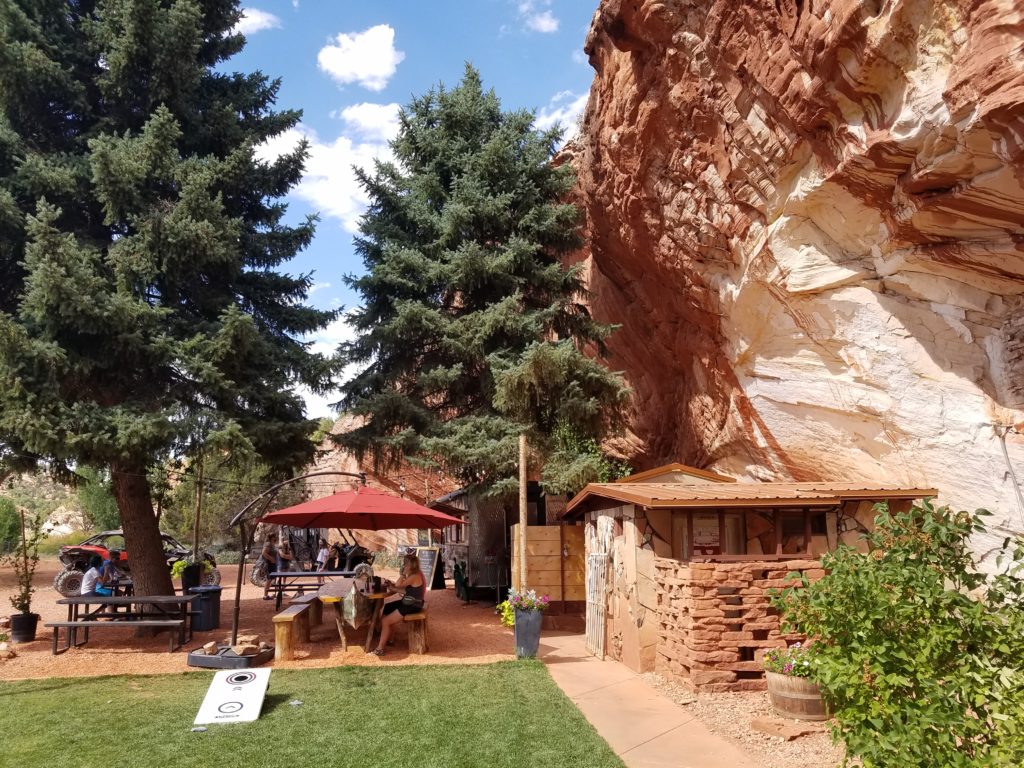 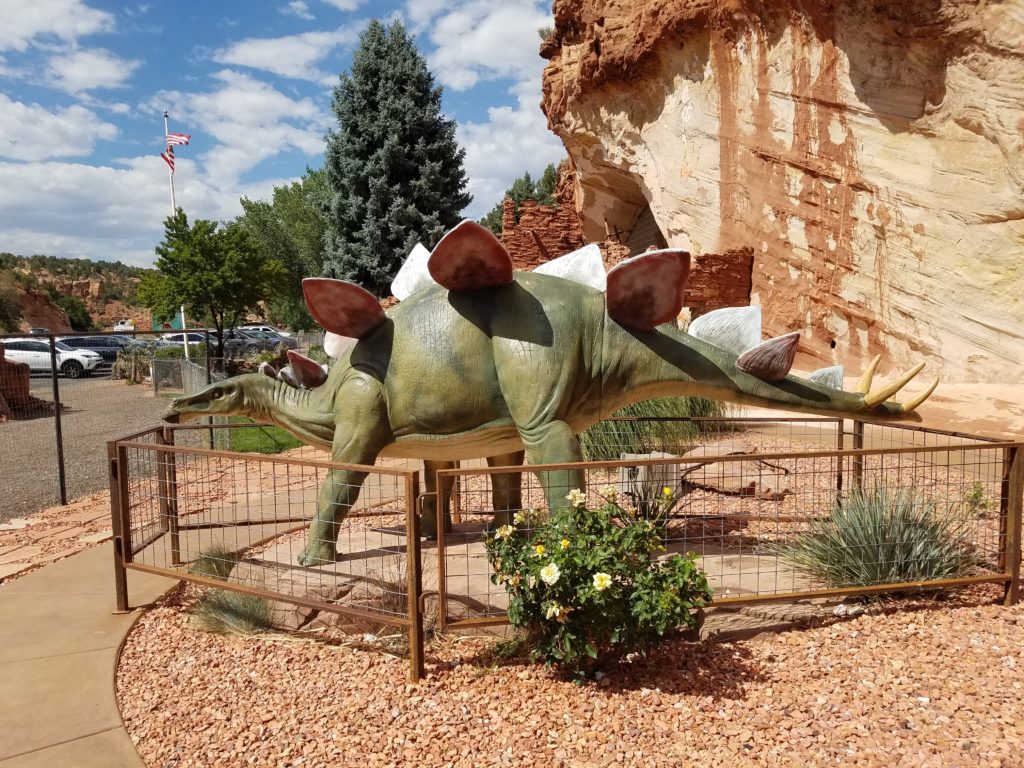 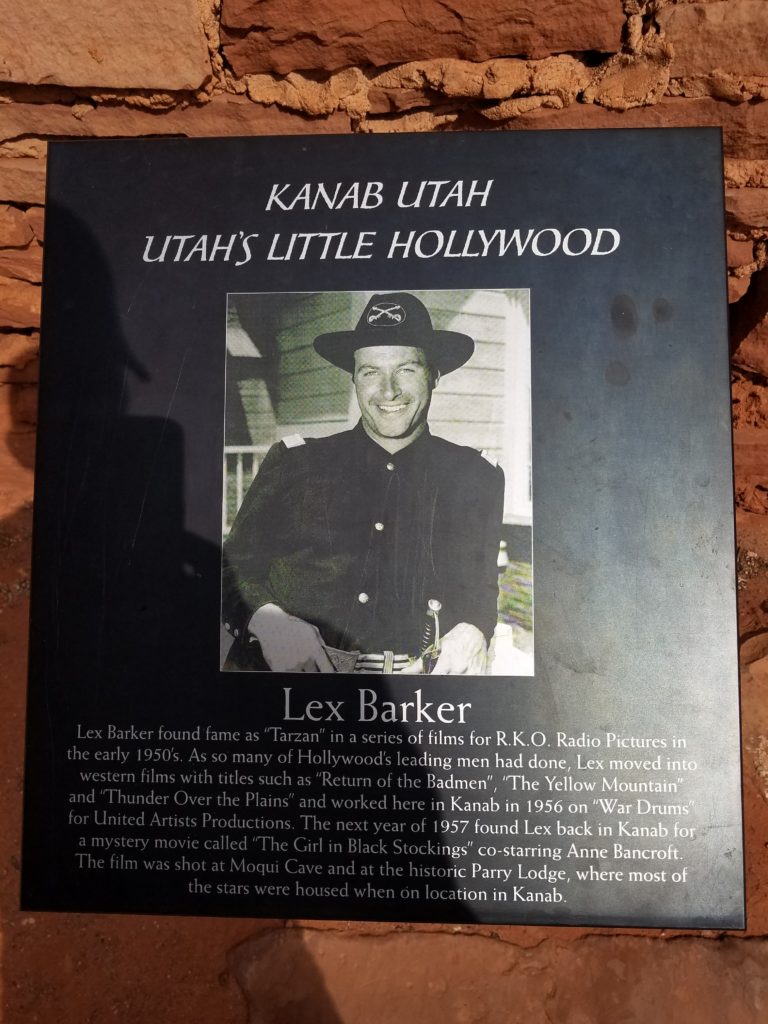 A plaque standing outside of Moqui Cave pays homage to Lex Barker, a famous Western film actor, and also explains that the cave served as a backdrop for a movie filmed in the area, Kanab, Utah, Aug. 15, 2020 | Photo by Reuben Wadsworth, St. George News 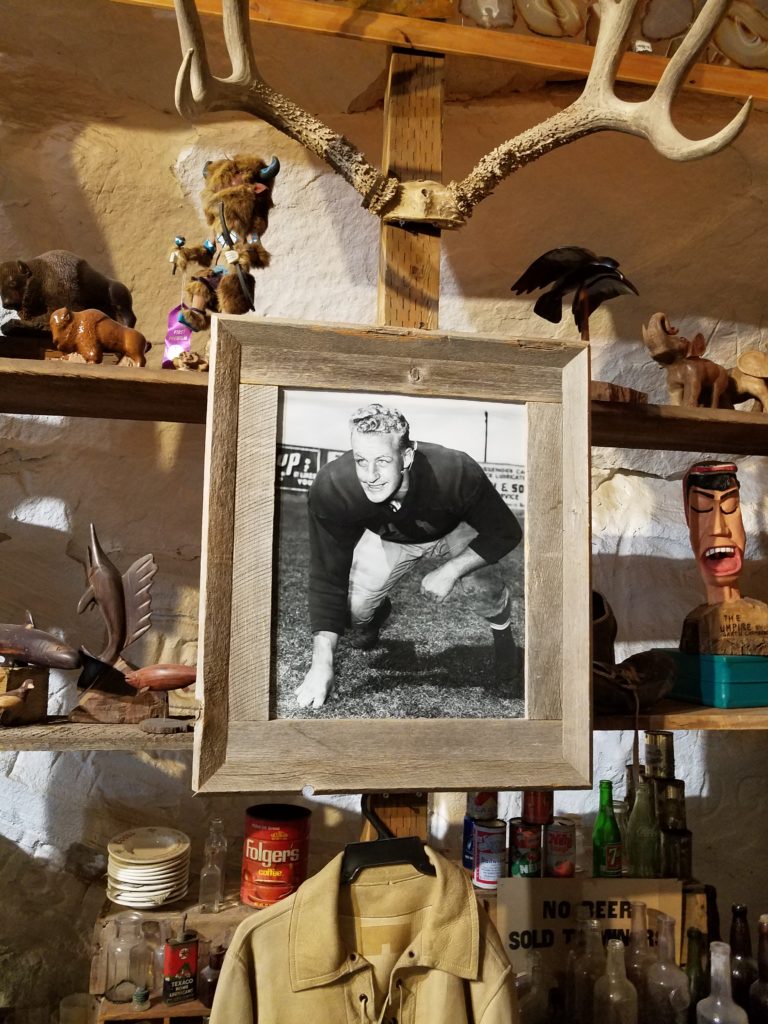 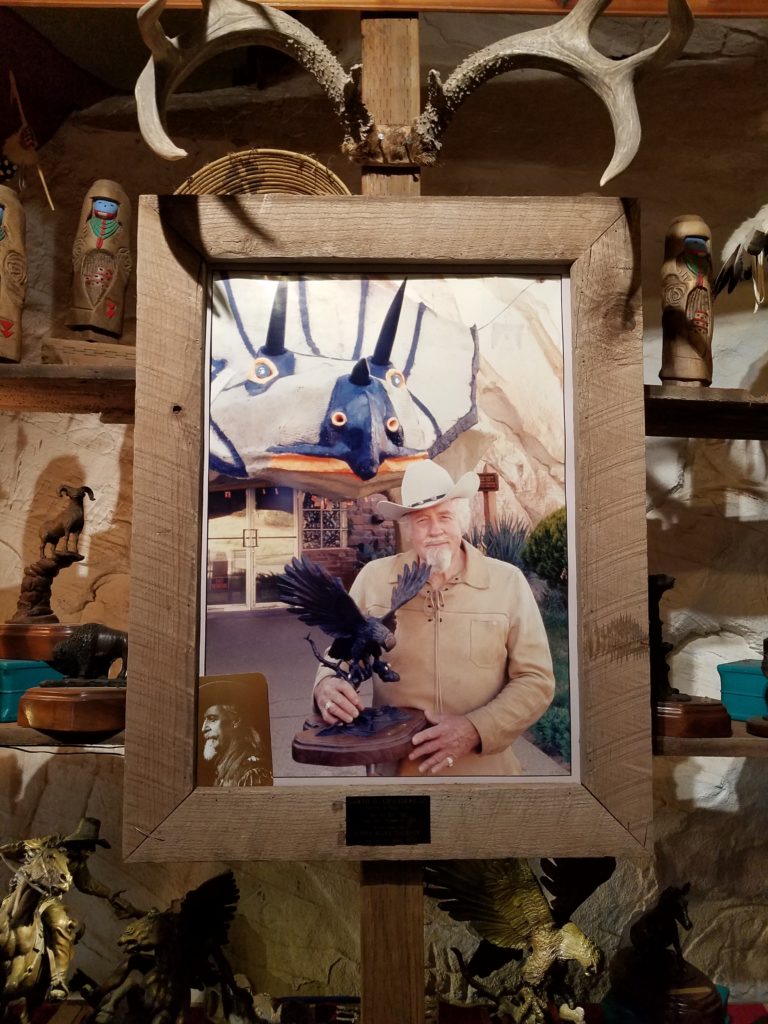 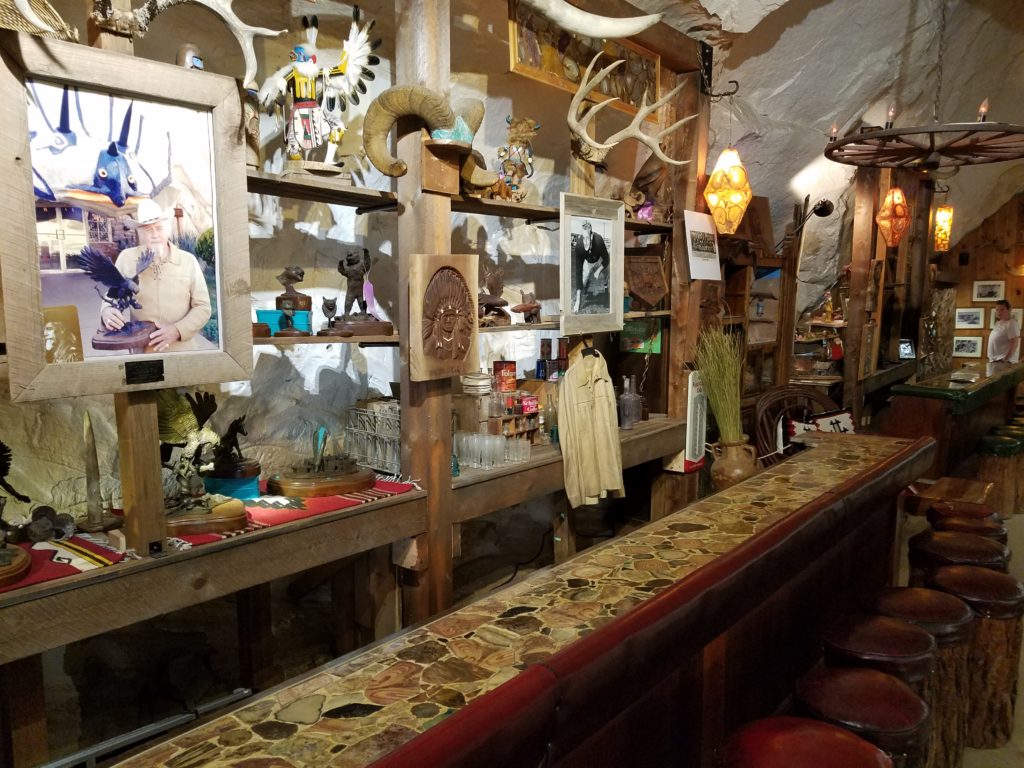 The old bar Chamberlain made when the cave was a popular watering hole is still on display, Kanab, Utah, Aug. 15, 2020 | Photo by Reuben Wadsworth, St. George News 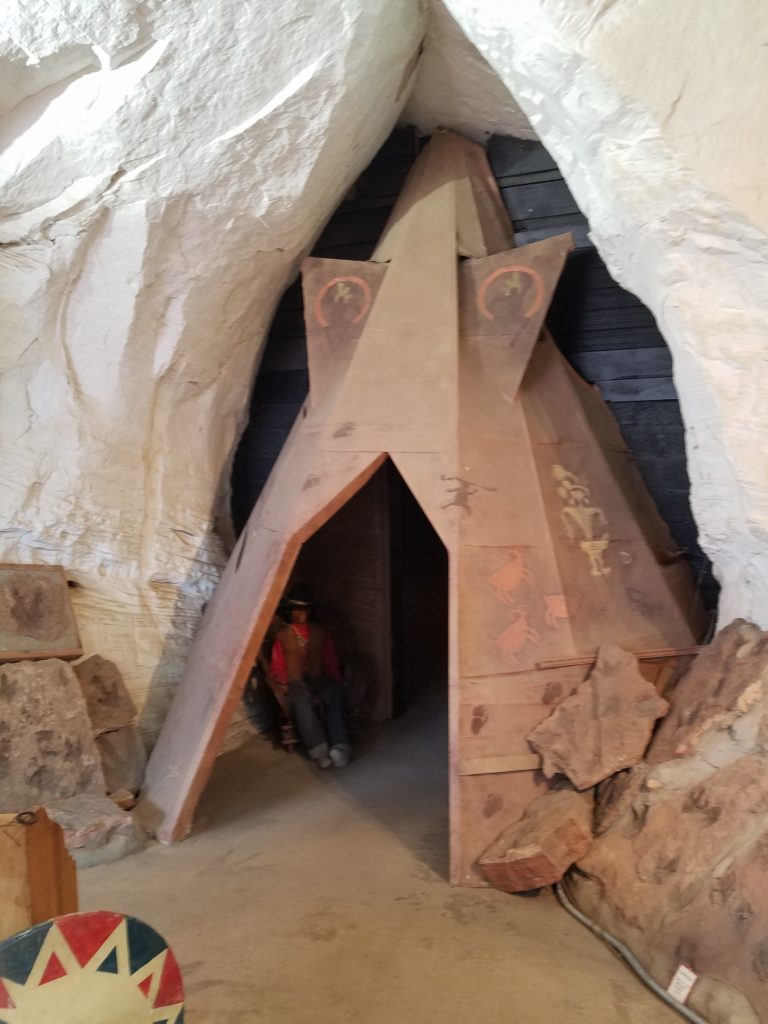 A tipi stands at the entrance to the black-lit room that is home to the phosphorescent rock display, Kanab, Utah, Aug. 15, 2020 | Photo by Reuben Wadsworth, St. George News 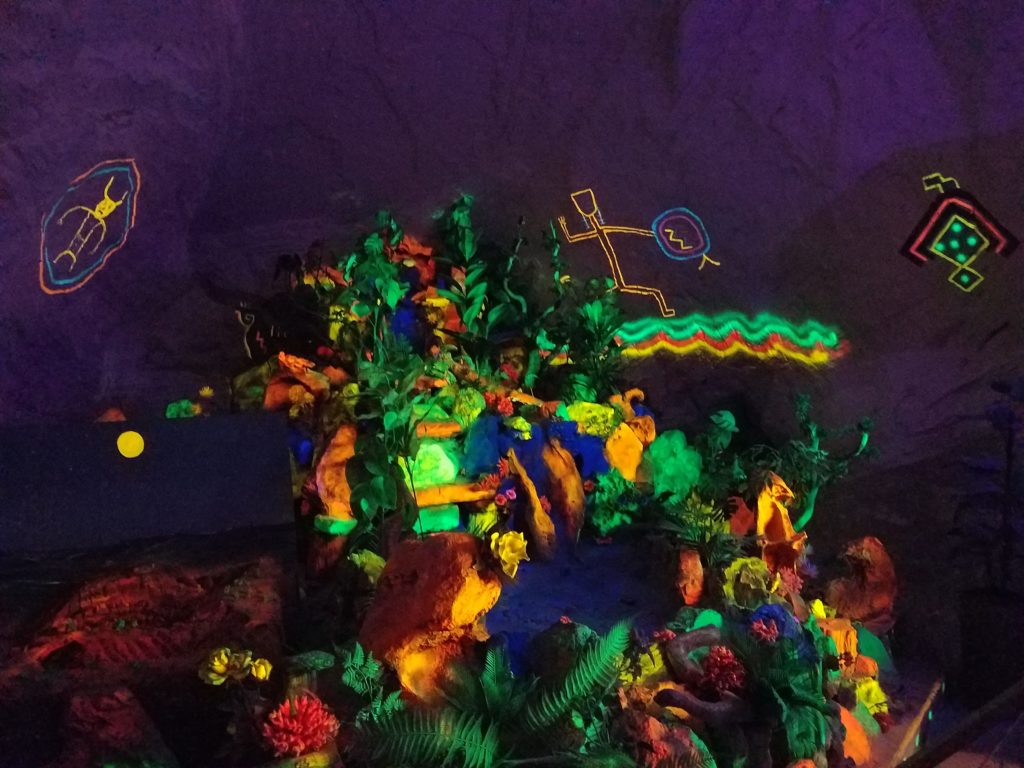 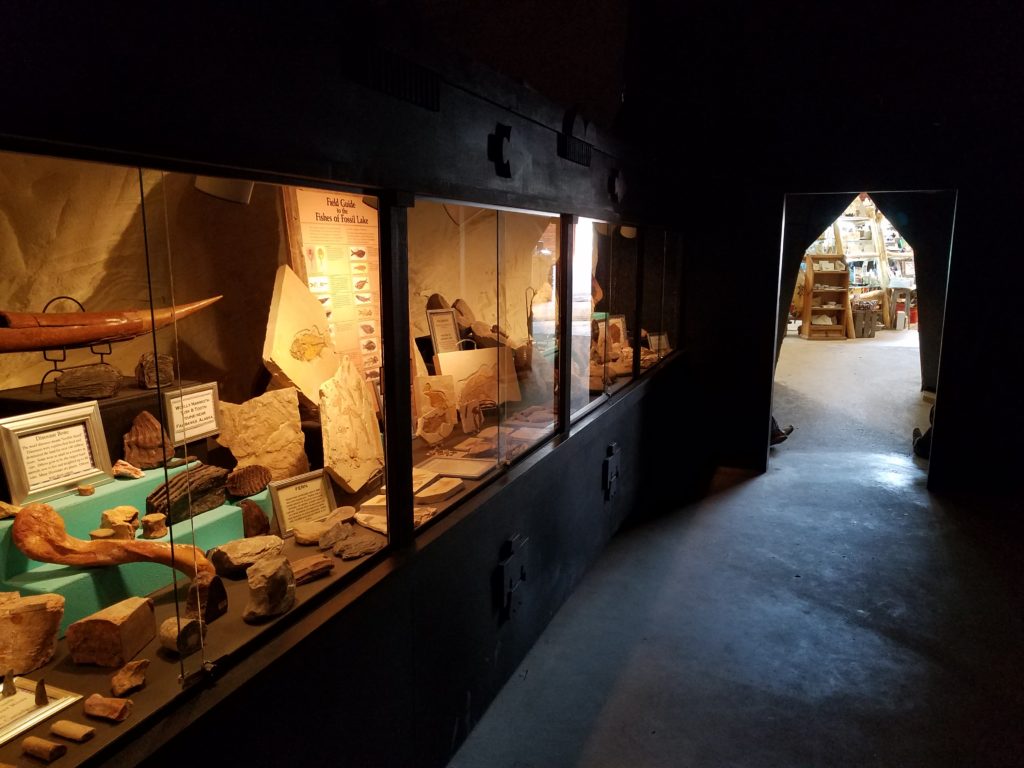 Kanab Western moviemaking day; its stint as the No. 1 Hollywood branch location