ZHeus 3 is a new invention that uses compressed air and motors rather than gunpowder to fire, location not specified, July 8, 2020 | Photo courtesy of Grant Fines, St. George News

ST. GEORGE — An invention that could lead to the end of gunpowder is not just an idea — it’s already been used in a real-world military mission.

Priced at $1 million, ZHeus 3 is not a gun; it’s a “platform” that has taken Harvester, a St. George-based inventor, 15 years to design. Harvester could not release his full name because he still has a commitment to national security.

The idea for this invention, along with an improved armor, began some 15 years ago when Harvester’s best friend died in his arms after being shot during an Air Force mission. The bullet shot straight through his friend’s bulletproof vest and kept going.

“The armor didn’t just kind of fail. It failed,” Harvester said. “It failed so much that it was the perfect storm of science failing the advertised claims and selfish, greedy business people taking many millions of government dollars — that were supposed to go into research development — into their own personal bank accounts.”

Harvester said after his friend’s death, the mathematics for ZHeus came to the forefront of his mind.

After being awarded a grant, he began an investigation into the defects of the body armor technology that failed his friend. The armor that was created as a result is now a vital component within ZHeus.

By legal definition, ZHeus is a proprietary combination of various hardware(s), software(s) and chemical technology(s) working in concert with one another for the purpose of demonstrating the ability to propel a separate proprietary technology (likely but not limited to, the form of a projectile) at various velocities at will onto a designated target or recipient.

“If this technology does not proliferate, we will probably colonize Mars faster than we stop using gunpowder for guns,” Harvester said.

Gunpowder was invented by alchemists during the Song Dynasty in China and was mostly used to launch firecrackers. A hundred years or so after its invention, gunpowder first made its mark on the battlefield.

“This is what every battle has had in it since this time. There have been very, very negligible upgrades to guns over that 500 years,” Harvester said.

The technology behind ZHeus has potential that could never be employed with gunpowder, such as having a high-tech fingerprint reader and the ability to fire at different speeds, from less lethal to lethal.

If ZHeus is lost in a field of battle, or during a riot, the platform defaults to being nothing more than a paper weight, as it requires an operator to have their fingerprints coded to the platform to work.

With gunpowder, there’s an explosion and gunpowder spreads everywhere, inhibiting the effectiveness of a fingerprint reader, Harvester said.

“Our platform does everything that those can do and way more, but ours doesn’t use any gunpowder,” Fines said.

The reason they call it a “platform” is because a gun uses gunpowder and ZHeus uses compressed air.

Weighing around 8 pounds, ZHeus can fire at a sustained rate of more than 1,100 rounds per minute and has the capability to fire at different speeds. At its less lethal level, it can fire at subsonic speeds — below the speed of sound, which is lower than 1,100 feet per second.

Fines said being shot at less lethal velocities has a pain level similar to a bee sting.

“But it becomes incapacitating because it shoots at 18 rounds per second,” he said. “So it’s like getting stung by a bee 18 times per second.”

Harvester said the projectile at this speed can tear approximately seven to 10 layers of epidermis, regardless of whether a person is shirtless or wearing a coat.

This is because the projectiles are pointed with a core of polyurethane and are “specifically intended to inflict the maximum amount of pain in less than lethal mode,” he said.

At its hyper-velocity range, ZHeus can fire in excess of 3,500 feet per second.

“Those are speeds that currently can only be achieved by ZHeus, which is classified, but not as classified as the bullet that makes it possible,” he said. “And that bullet could never go at any other speed in any other platform.”

Despite its rapid firing, ZHeus does not make a bang sound and doesn’t require hearing protection. It sounds much more like a sewing machine.

“The hardware, software, reactions, physical processes don’t just compete with gunpowder, they by far surpass gunpowder’s ability to propel a round at these speeds,” Harvester said.

Jordan Fines, the operations manager for Kronuz, told St. George News that unlike other firearms that get hot, ZHeus stays cool.

“Because ZHeus doesn’t produce that type of heat, it can fire all of the rounds on board simultaneously without having to take a break to cool down,” he said.

ZHeus 3 holds almost 700 rounds and does not utilize spiraling grooves to spin its classified bullets. The polyurethane bullets also contain iron dust. With the use of magnets, the bullets balance in mid-air during propulsion causing no friction points and thus no heat.

Magnetics within the platform are what cause the projectile to spin.

In place of gunpowder are three motors that spin over 200,000 revolutions per minute. At the less lethal level, only one motor is spinning. At the high-velocity firing range, all motors are spinning. At any level of firing, the platform has no kick.

Grant Fines said that the platform can be instantaneously tuned down to fire at a less lethal rate, a concept that President Donald Trump mentioned in his June 16 speech at the White House Rose Garden about police reform.

When Trump said his Administration has been looking into less lethal weapons for law enforcement officers to use, Grant Fines said the president was likely referring to ZHeus.

“One of those he was referring to we believe was ours,” he said, “because it will shoot at a less lethal rate.”

There are three variances of ZHeus. ZHeus 1 holds 200 rounds and is the most similar to a standard rifle. It is primarily for the battlefield.

ZHeus 2 is made for protecting things like nuclear or chemical facilities and is a tethered version of the platform, in which it is anchored to a wall or some other external source that could be loaded with millions of rounds.

ZHeus 3 is the commercial design, and at $1 million is far more affordable than the others.

The maximum effective range of ZHeus 3 is over 300 yards.

“We had to accomplish that in order to compete against the possibility of replacing the M-16 across the entire Department of Defense,” Harvester said.

The most significant obstacle moving forward with using ZHeus, especially for use and replacement in the military, is to ensure the government that the platform is not going to explode in soldiers’ hands.

Any time ZHeus fires over 200 rounds, Harvester said one out of every 100,000 ZHeus platforms will have a serious malfunction. 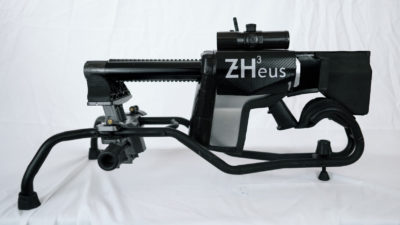 “It’s unfortunate to think of anyone being blown up over ZHeus, but it’s only under the conditions that they are firing cyclic and over 200 rounds.”

ZHeus is designed with blow off panels in the case of an explosion that are designed to project away from the operator.

This is where the armor comes in.

Compared to a standard bulletproof vest, which tends to be big and bulky, the system of armor Harvester aided in development utilizes carbon nanotubes, which is very light and about as thin as the hardcover of a book.

By putting the carbon nanotube armor inside the platform, they mitigate the risk in case of malfunction. In fact, Harvester said this armor was primarily made for ZHeus, not to be worn on the body.

“This platform has already gone through 18 months of combat trials and has already completed at least one real-world mission where there was no gunpowder backup. It was all done with ZHeus platforms,” he said.

In situations such as riots, ZHeus 3 would automatically be set to less lethal and its velocity would be controlled by a commander, who would have the ability to turn off an officer’s platform in order to keep better control, especially in cases where a fight or flight response is being triggered.

Grant Fines said that in light of the current emotional climate of the country, ZHeus can be a step toward police reform. By having a platform that can de-escalate a situation, some lives could be saved.

Fines said their next step is to build a bigger team, who will take their ideas, which are still in their infancy, and expand. In the meantime, it’s not for sale to civilians.