ST. GEORGE — What began as an effort to recognize local police officers and their families morphed into an all-out blitz after numerous businesses across the valley joined in the cause started by a local business owner.

Amid the current unrest surrounding police across the country, a local company wanted to recognize the men and women who risk their lives every day to protect communities “every single day,” Tony Chambers, owner of Dixie Direct, told St. George News.

He added there is something very special about Southern Utah and the many residents who continue to “back the blue,” amid a climate of unrest, he said.

To that aim, Chambers decided to do something special to show his appreciation by giving each officer a Dixie Direct card. That was the plan “initially at least,” he said.

Later that same day, he mentioned his plan to a friend, Brett Crockett, owner of Fiesta Family Fun located on East 1160 South, who immediately wanted to join in the cause.

“I was just talking to him (about) the plan and wasn’t even soliciting any help, but as soon as I told him what I was doing, he (Crockett) said he wanted in,” Chambers said.

And so it began, and after posting his mission on social media, in less than 24 hours there were more than a dozen companies wanting to join in the effort. The end result was more than 200 backpacks being filled with not only the Dixie Direct cards but with gift cards and discounts for food and other activities the officers can share with their families.

With 200 down, there are still more to go, Chambers said, as he is currently working on providing backpacks filled with similar items that will be delivered to the LaVerkin Police Department and the Washington County Sheriff’s Office.

“I already have two Dixie Direct cards set aside for both departments, one for this year and a card for 2021,” he said.

Once the backpacks were filled and ready to go Wednesday, the team set out for the Hurricane Police Department where each officer received a pack through Officer Ken Thompson, the department’s public information officer.

Thompson told St. George News the delivery was a remarkable show of support, and the effort that went into putting the packages together was not lost on any of the officers.

He said the generosity shown by the community overall has been “just incredible,” adding “there’s just no way I can even name all of the businesses that have supported our department — it’s really unbelievable.”

As an example, he said, a gift card was purchased at a local soft drink outlet by an anonymous individual to be used to pay for any drinks ordered by police officers. Since then, many in the community have continued adding money to the card, “daily in fact,” and several officers have reported having their meals paid for at a number of drive-through restaurants as well.

“The customer says nothing as they pay for the officer’s meal and then they drive away,” Thompson said. “So when the officer gets to the window, their meal is already paid for.”

Officers in Washington City also received the special delivery Wednesday, which not only served as a show of support for the officers, but for the families that support them every day, Police Chief Jason Williams said.

He said the donations couldn’t have come at a better time since the stresses of the job have effects that are far-reaching, often going beyond the officers and impacting their families as well. As such, giving them an opportunity to engage in activities with their families is one of the best stress-relievers, he said.

“It’s so important for the officers’ well-being to go out and do fun activities with their families,” he said. “It gives them a cooling-off period from the stresses of the job and time to relax with the most important people in their life.”

Comparable to what is happening in Hurricane, Williams shared similar examples and said they have had a number of recent visits from residents “who just stop by and let us know they are behind us,” he said, which was a message that came through loud and clear during Wednesday’s delivery.

In St. George, where more than 110 officers serve over 80,000 residents, the delivery was met with quite a bit of emotion as Chambers and his crew explained to St. George Police Officer Tiffany Atkin the contents of each pack.

Atkin said it was the efforts that went into the packs by Chambers and so many businesses throughout the community that was so touching, even “amid all of the madness,” she said. She added it can serve to inspire people to reach out and “do amazing things for others,” she said.

The Santa Clara-Ivins Police Department also received the packs, which were distributed to the department’s 14 sworn officers Wednesday, and the timing could not have been better, Sgt. Reed Briggs said.

“We see what’s going on nationally, and it affects us whether we want it to or not,” he said.

This is especially true in respect to public perception and how the community relates to law enforcement, Briggs added.

He also said communities across the county “have really been great across the board,” and the packs delivered was the perfect demonstration of that support.

Despite the fact that many officers get into the profession to help people, he said, they often find themselves confronted with negativity, trauma and “quite frankly, evil” relating to the types of incidents they handle on a daily basis. Coupled with the unrest going on right now, he said, it can hit hard on an officer’s confidence.

“So, having the support of the community helps to counter what we see out there,” he said. “And many of us believe the ‘thin blue line’ goes beyond the camaraderie we share between each other — we are also that thin blue line that can be the only thing that separates the community from chaos and represents the stand we take to protect our communities.”

Dixie Direct and a number of businesses, including Stephen Wade, also got together to make “Back the Blue” yard signs that can be picked up from a number of locations and are free to the public. Chambers said the signs were created to serve as a visible representation of the support the community has for their local police officers. For more information, click here. 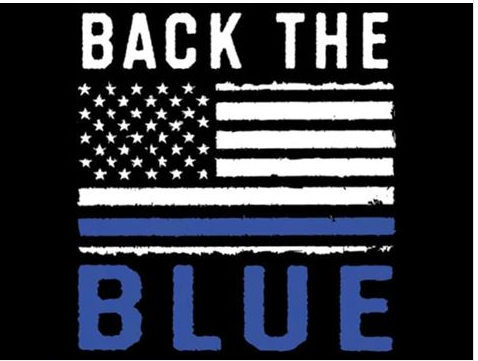 "Back the Blue" yard signs are available to the public at no charge, thanks to the efforts of Dixie Direct, Steven Wade and other local business, St. George, Utah, June 18, 2020 | Photo courtesy of Tony Chambers, St. George News 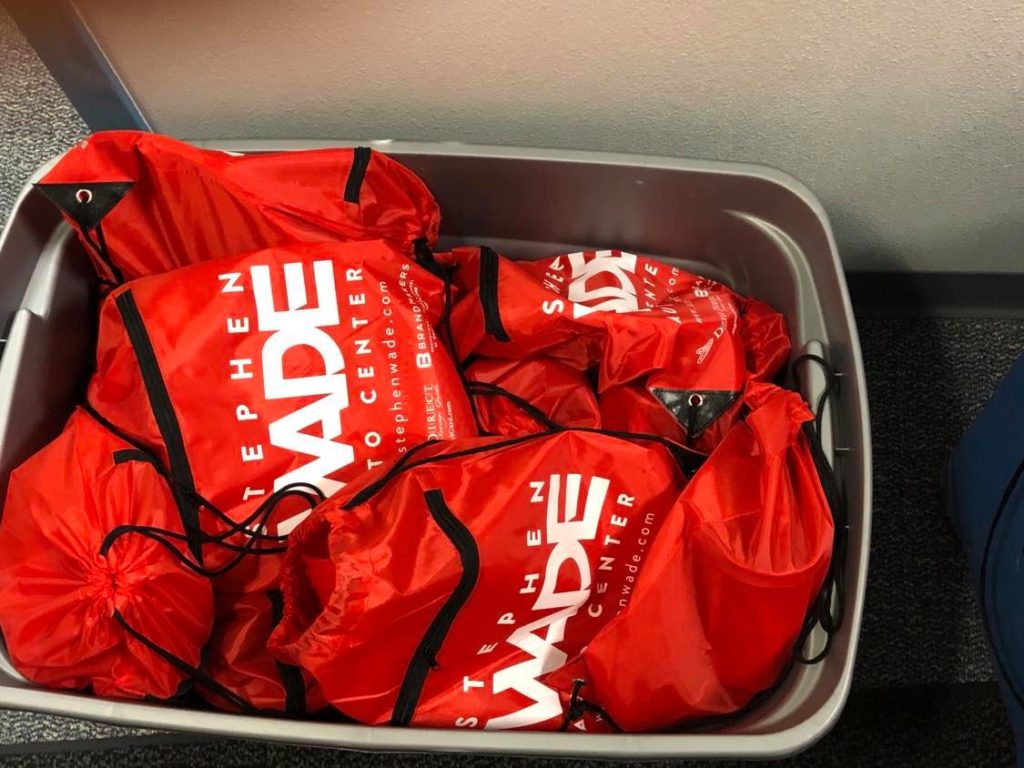 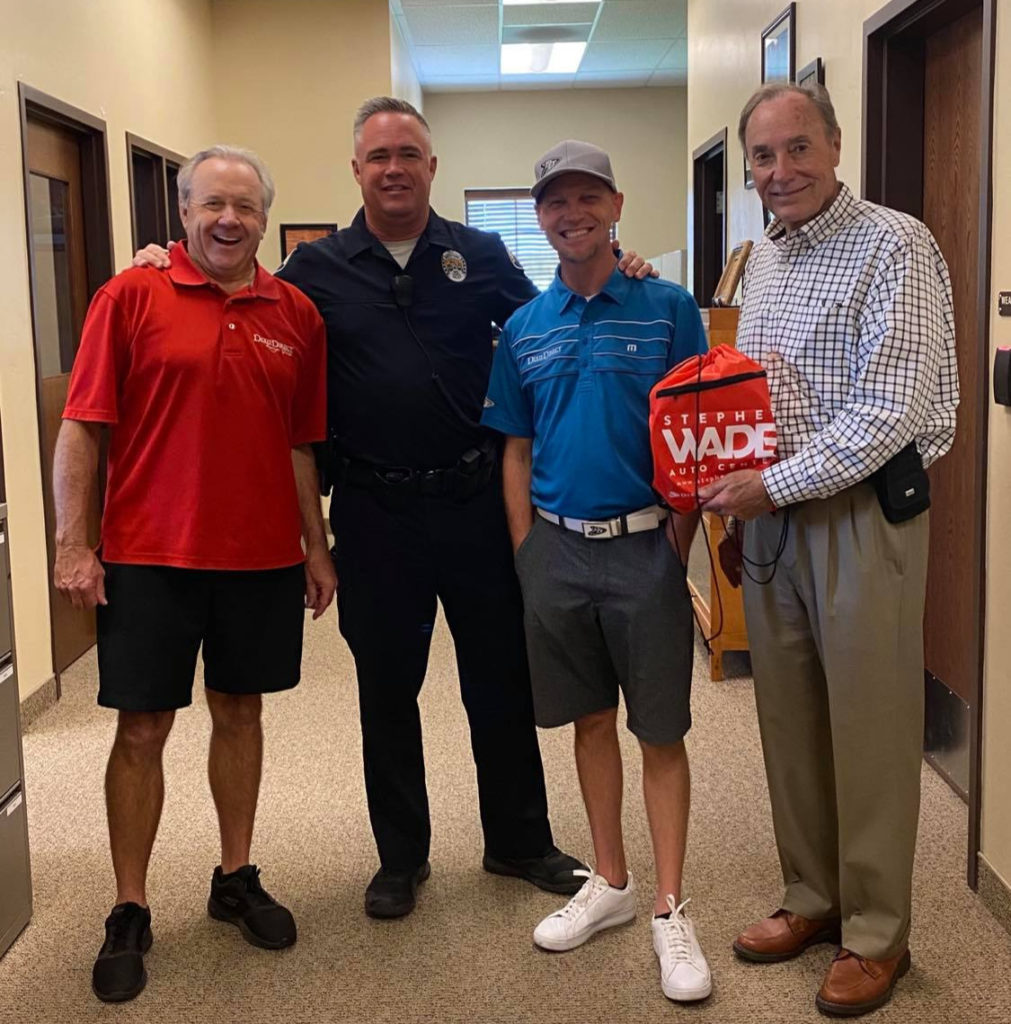 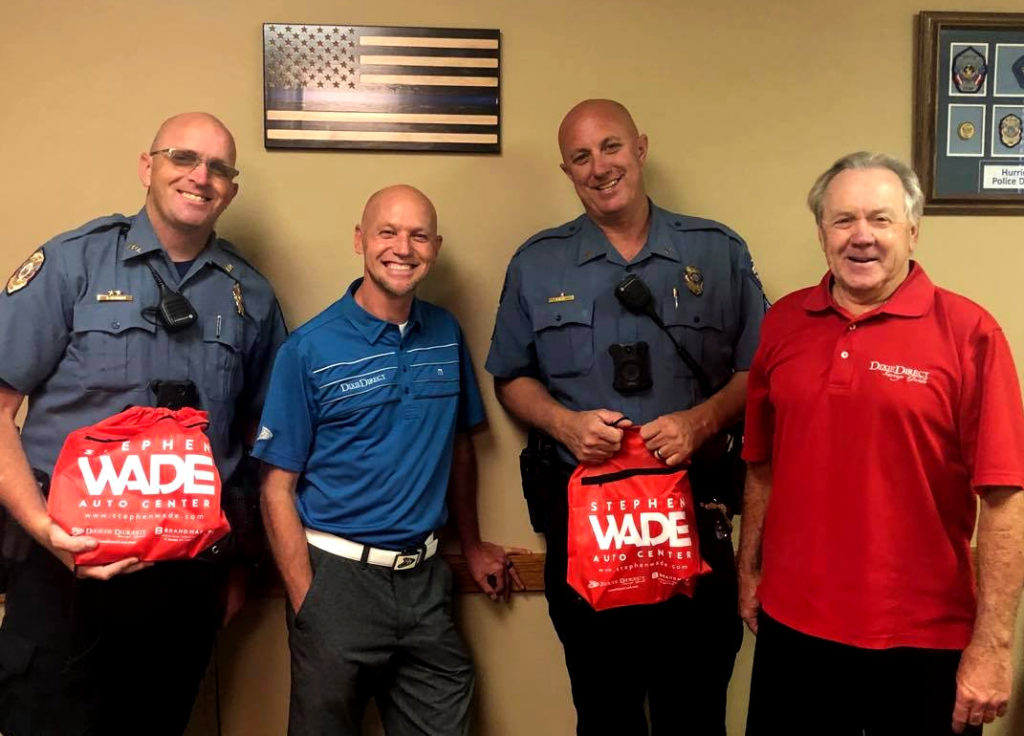 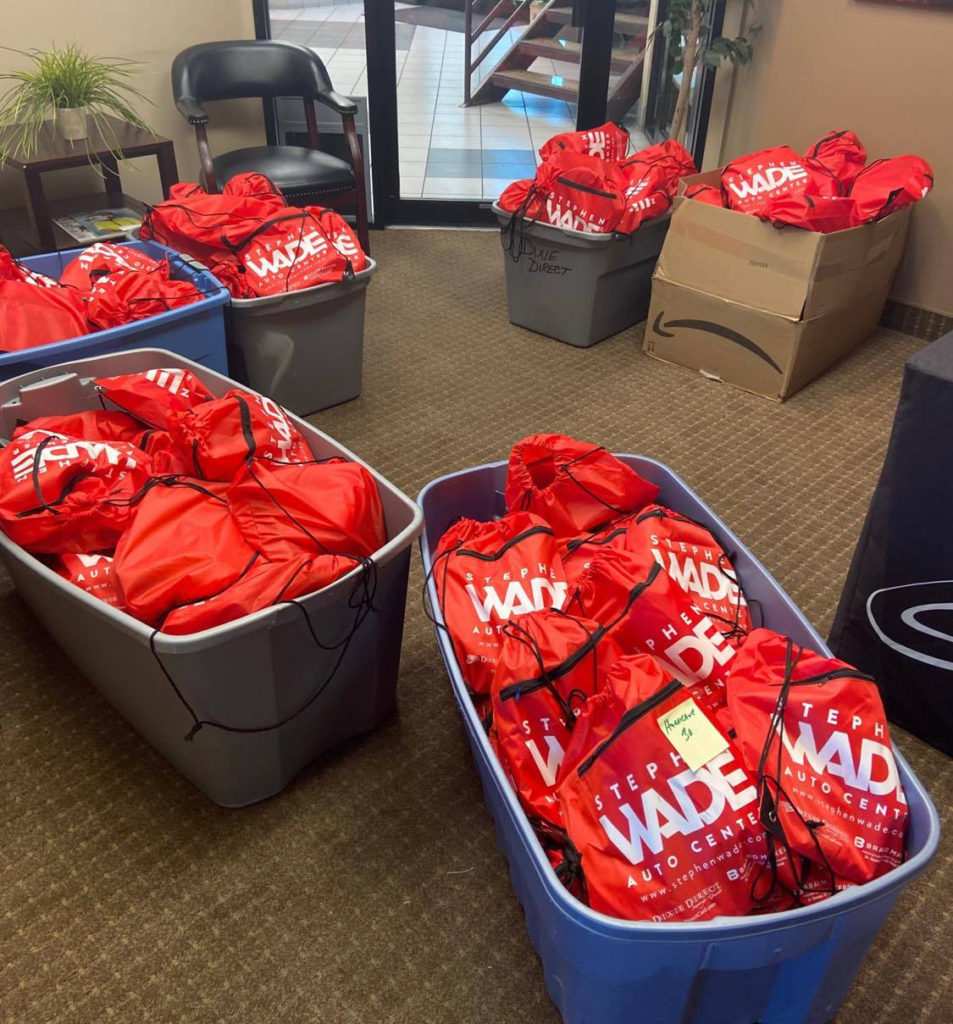 More than 200 packs full of items donated by the community to be delivered to police departments in Washington County are assembled and ready to go at the Dixie Direct offices in St. George, Utah, June 17, 2020 | PHoto courtesy of Tony Chambers, St. George News 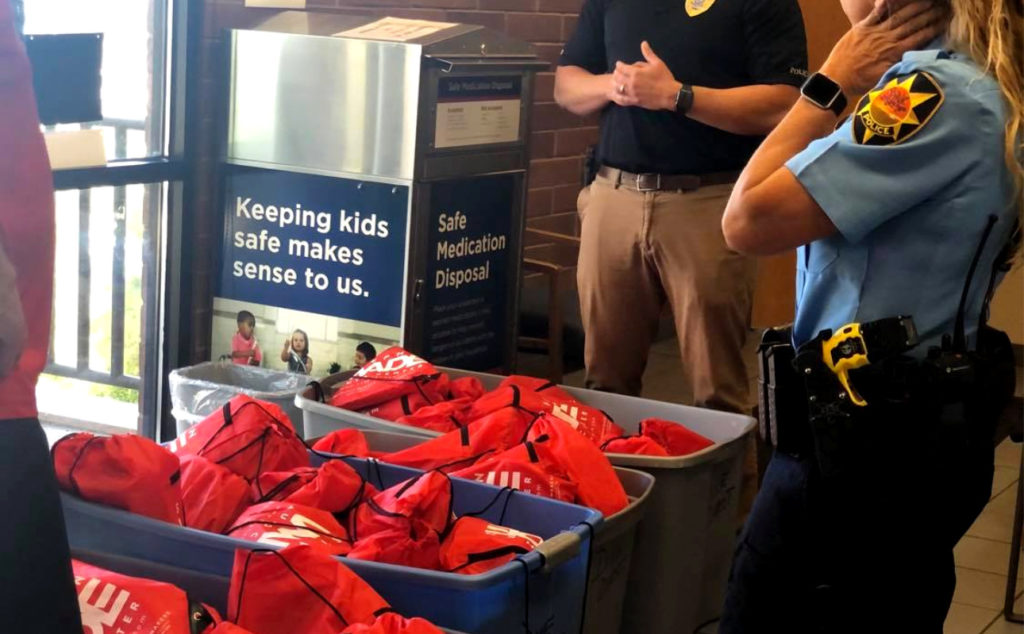 Bins of backpacks full of donated items are delivered to the St. George Police Department by the Dixie Direct crew to be handed out to the officers, St. George, June 17, 2020 | Photo by Cody Blowers, St. George News 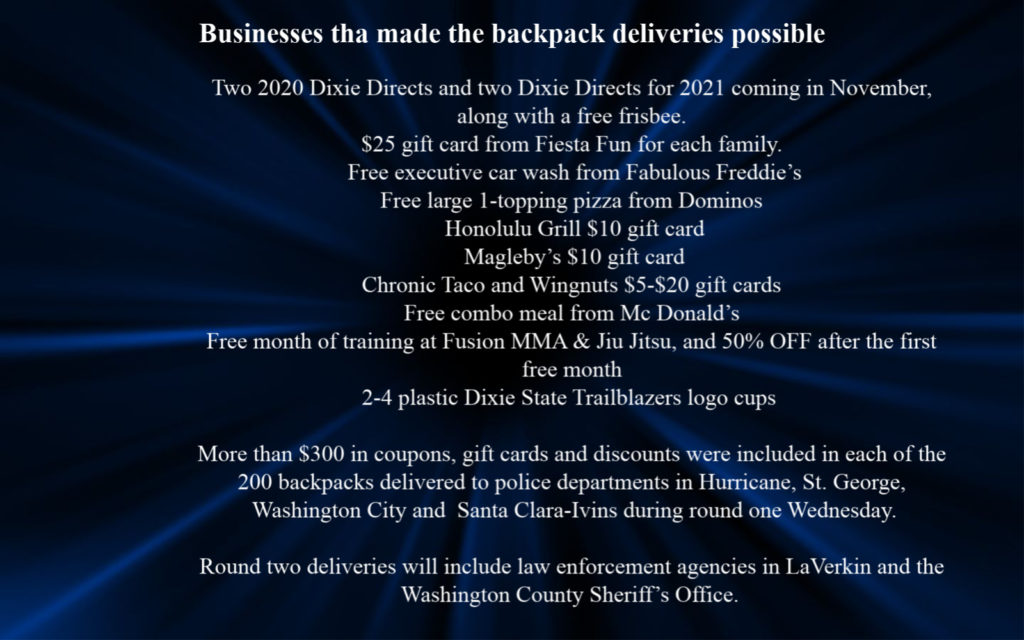 List of sponsors that donated gift cards, discounts or other items to "Back the Blue" as deliveries were made throughout the county, St. George, Utah, June 17, 2020 | Image by Cody Blowers, St. George News

Catalytic converter thefts continue to rise; tips to protect yourself from this costly heist