When officers arrived on scene, they immediately began diverting traffic around the accident where two Honda CR-Vs were incapacitated and blocking the intersection. They soon discovered a total of three vehicles were involved, a Chevy pickup was pulled off to the side of the road in an empty dirt lot near the accident.

“The silver SUV turned left in front of this red pickup,” Christian said. 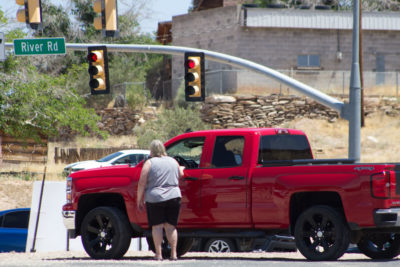 A collision occurred between the two vehicles, and the Silverado pushed the silver CR-V into a tan, Honda CR-V traveling east, which was waiting at the red light preparing to turn from Ft. Pierce Drive onto River Road.

“No injuries, everybody was wearing their seat belts,” he said. “A citation is being issued to the silver SUV’s driver for failing to yield on a left turn.”

Failure to yield accidents are common in St. George, and Christian advised everyone to proceed safely when entering any intersection.

“Make sure that when you do come to an intersection and the light is yellow, yield to through traffic and then when the intersection’s clear, then you can make your left turn,” he said. “Drive safe; we all want to get home.”

Traffic was slowed for about an hour as both Honda CR-Vs were rendered undrivable and had to be towed from the scene.

Andrew Pinckney graduated from Dixie State University in 2017 with a bachelor’s degree in mass communication. He has deep passion for writing and capturing the great outdoors through his camera lens. He is the proud father of one and can usually be found watching a good movie or hiking the rocks of Southern Utah in search of petroglyphs.